It was Loropetalum week in the Asian Collections 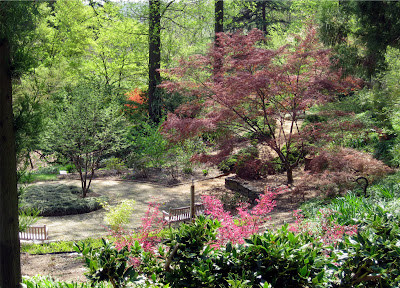 The hot pink flowers front and center are Loropetalum chinense 'Zhuzhou Fuchsia'. We have a pretty good selection of other cultivars of this species. None of them have the white flowers characteristic of the species but range in color from light pink, through fuchsia, to almost burgundy. They're fun plants that have only had a presence in the US for twenty years or so. The Arboretum played an important part in the process of their introduction. 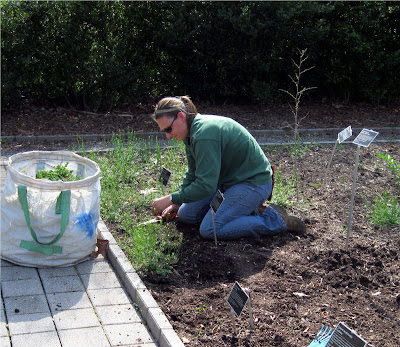 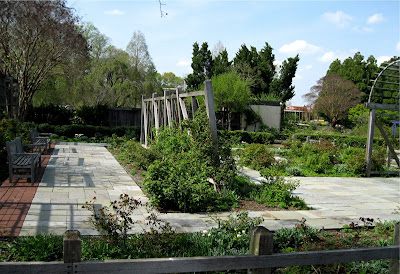 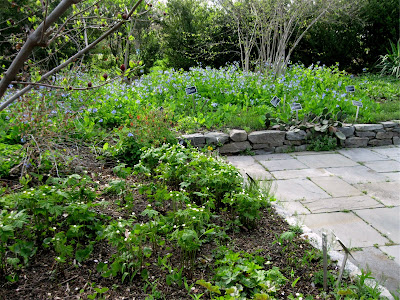 GrayC is working early, late, and long to stay on top of the garden sans Jeanette, and pre intern. She was way more cheerful than my photo suggests! Stefan was helping out today and I know Scott and Kevin have been there. We'll get it done.

The roses were largely replanted over the last year or so and most of them are getting large enough to put on a good display. They'll start in the next week or ten days and will be worth a trip in May if you're local.
Posted by ChrisU at 4:21 PM 0 comments 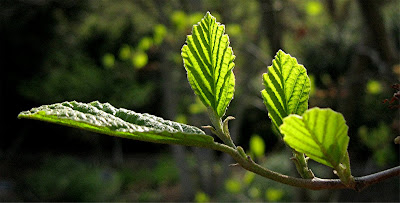 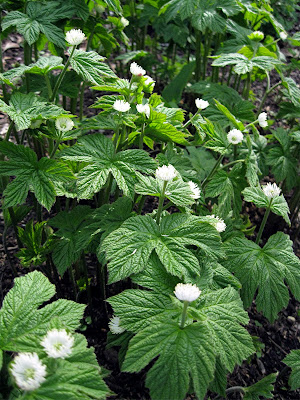 Plants are everywhere! I found these in the Herb Garden; all their plants are "useful" as herbs, spices, medicinals, dyes, etc. Goldenseal, Hydrastis canadensis, is widely used and widely collected. It is one member of the herbal pharmacopoeia whose efficacy is undisputed by Science and Medicine. One of the MANY functional constituents is the alkaloid berberine which colors the rhizomes yellow as it does the stems and roots in so many of the Berberidaceae. According to folk-medicine, it can cure a wide spectrum of maladies; it is considered to sit just below Ginseng in the pharmacological heirarchy, and is coveted and sought after nearly as avidly. I remember spending the summers of my youth on Grandma's farm south of Charlottsville, Virginia. She had several hundred acres of rolling fields and forests in a valley between low mountain ridges. Much collecting of both Ginseng and Goldenseal went on the the summers and the Covesville General Store and Post Office, since yuppified, bought both dried. And paid eye-opening rates. Both it and Ginseng are "threatened or endangered" over most of their ranges.
Posted by ChrisU at 3:51 PM 0 comments 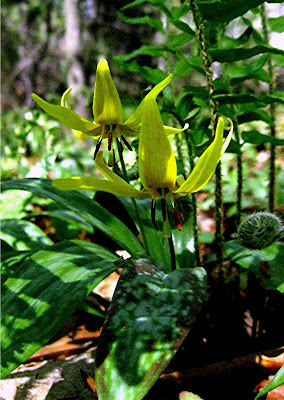 It's hard for me to say a plant is a "favorite " of mine because I basically love them all, but Trout lilys are, for sure, near the top of the list. They've been flowering for a little while now in Fern Valley but will continue at least through this weekend.

I've never really tried them in the Adelphi garden, the sandy conditions just seem wrong, but bought a package a few years back from a box store. They turned out to be supersized, Trout lilys on steroids. I assumed they were some complicated hybrid of Asian or European, or African species. A couple years back I was surprised to learn they are in fact a western US species, Erythronium tuolumnense (probably cv. 'Pagoda'). Go figure. I'm developing a fondness for them though they have none of the grace or delicacy so clearly associated with the plant in the picture and, well.....all the other species and cultivars. Still, any Trout lily is a good Trout lily.
Posted by ChrisU at 2:57 PM 1 comments

Working in the collection we occasioanlly meet giant hairy spiders 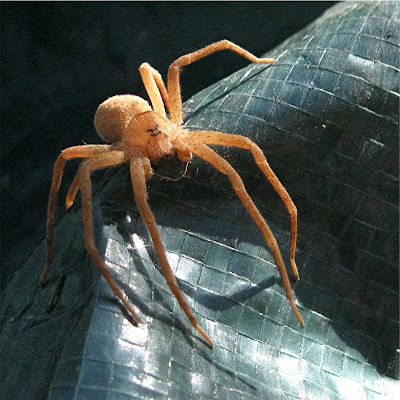 Isn't this a nice one? He's sitting on the tarp full of leaves I had just dragged down the path and hoisted onto the Mitsubishi.
Posted by ChrisU at 2:53 PM 1 comments 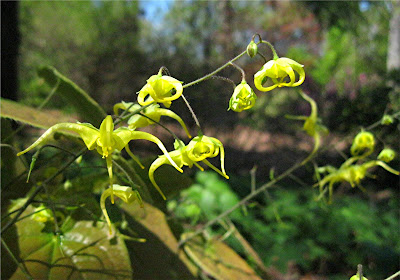 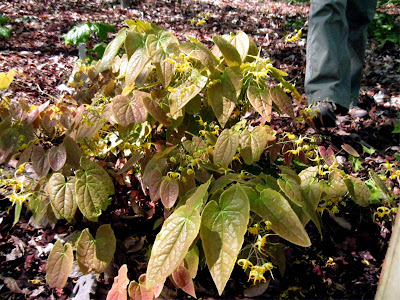 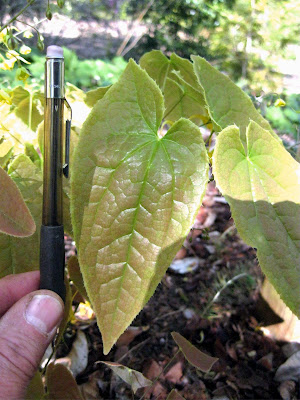 This is a very special Epimedium; it was collected in 1994 on the Wudang Shan (a mountain range) in central China.

Is it just me or does Acer palmatum 'Kiyohime' look like a Pterosaur rising out of some primordial ooze? 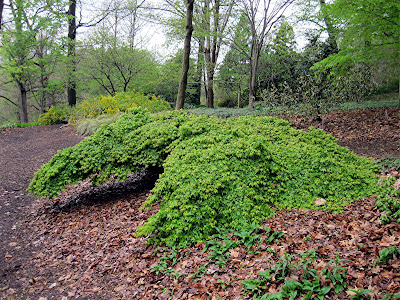 I'm pretty sure it's just me but I had to check.
Posted by ChrisU at 2:03 PM 2 comments 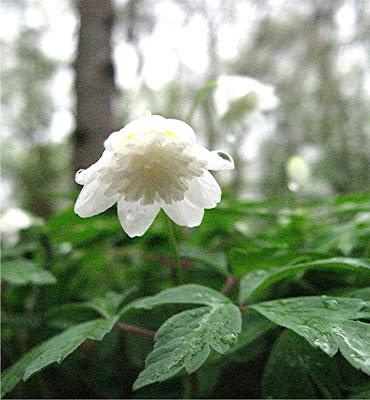 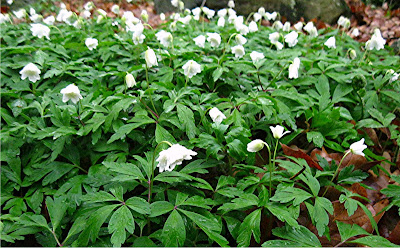 I walked into Fern Valley this afternoon in spite of the gloom. It's beautiful. There are drifts, colonies, flowers everywhere. Virginia bluebells, Trilliums of all sorts, various Dicentra, Phlox of all sorts, Columbines, and more.

This colony has been growing near the entrance across from the Parking lot for years and it's getting sizable. It's very uncommon in the trade but ought not to be. In the 7 years I've been watching it, it's increased ten-fold.
Posted by ChrisU at 4:14 PM 1 comments 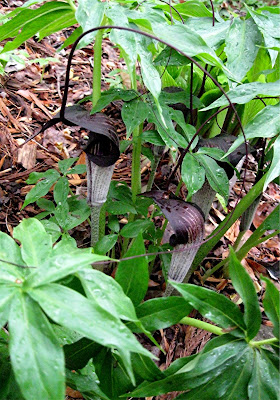 Anemone seedheads from last fall....this must be anemone week 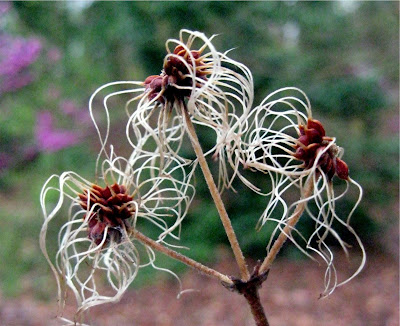 I seem to post one or two every day. In the midst of all this floral splendor these seeds caught the light and then my eye. The Ranunculaceae has the best seed heads.
Posted by ChrisU at 3:12 PM 1 comments 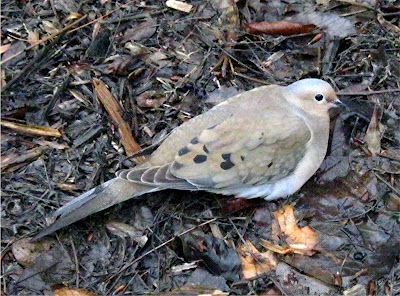 Amanda and I both spent part of the morning putting out labels for plants. We both ended up ner the middle of China Valley where she told me about this dove. The bird let her approach to within a few feet and then scurried away leaving a large dove "chick" she'd been hiding beneath her body. By the time I got back down she had apparently secreted her fledgling but still allowed me to approach to within three feet. I'm sure the baby was close but we didn't look.

The two springs I spent in China Valley I encountered post-adolescent doves whose interactions with me consisted of running, hiding, or freezing in an effort to disappear. I don't know this but it seems that while doves are not gallinaceous birds (birds like pheasants, grouse, chickens, etc. that spend more time on the ground than in the air), they behave that way when juvenile. They are great fliers when adult but do seem to have something in common with those "land birds".
Posted by ChrisU at 2:58 PM 0 comments

It rained off and on today; the collection was beautiful 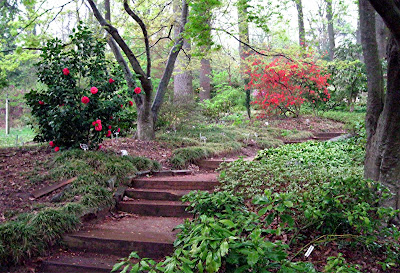 'This view up from the overlook at the head of the Central Valley includes a nice Camellia japonica, Rhododendron 'Dorsett', and a lot of flowering Epimediums that are too small to stand out. If you're in the area and you like epimediums, you should check ours out this week or next; we have a lot of different species and cultivars and they're all flowering now.
Posted by ChrisU at 3:59 PM 1 comments

There's a colony of something living in the ground here... 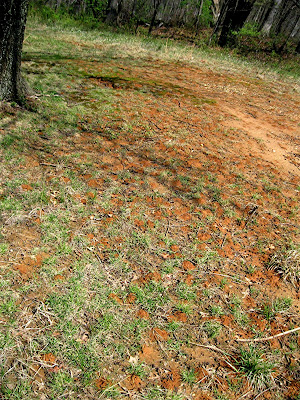 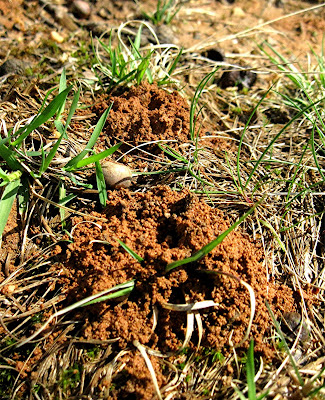 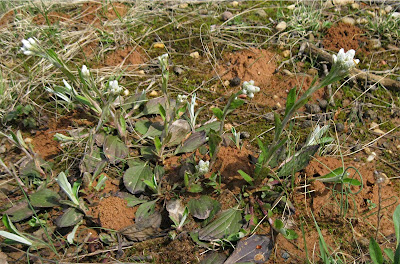 On the dry slope across from the Capitol Columns there are well over a thousand of these...these...holes. I looked around on line a bit and found a near duplicate of my picture on this NCSU Extension page. So I'm comfortable calling them ground nesting bees. Anything more specific (sic) than that will be left to experts!

They seem to like the exposure of the slope: I found holes equally dispersed on bare ground, in Danthonia (that short curly xeric grass), Polystichum (a genus of moss), and (this is for you GrayC) another xeric plant, Antennaria (Pussytoes). I'm deducing that they like well drained soil as the extension service picture also suggests dry conditions.
Posted by ChrisU at 3:38 PM 1 comments

Davidia involucrata.....don't those big white stipules put you in mind of the big white bracts that subtend the flowers? 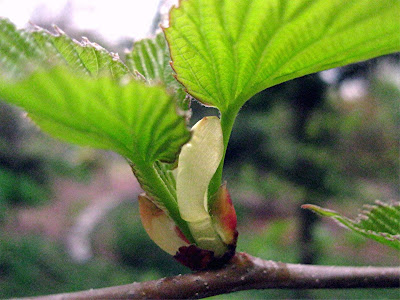 I was admiring the volunteer Dove tree on the road above the GCA Circle. Actually I wasn't admiring it, I was searching, pointlessly, for some sign that this might be the year it begins to flower. I've never notices the stipules before but maybe that's because there's always so much floral excess distracting me when the Davidias leaf out.
Posted by ChrisU at 2:54 PM 0 comments 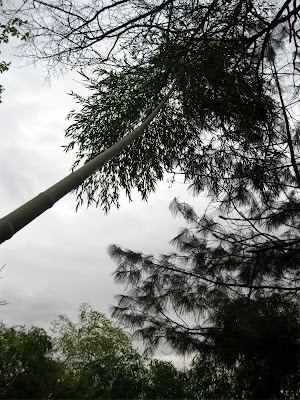 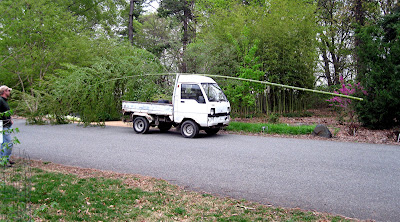 Every year about this time, the folks in the Bonsai Museum ask us for a BIG piece of bamboo. We always oblige. I don't know the details, but I do know that eventually it ends up stripped of its brush greenery, holding fish kites? way up in the air. Nathan did it last year and balanced it atop his vehicle the way I did today. The previous year I just reached through the window and held it as it dragged on the pavement the mile or so to the Bonsai compound. That was bad because I couldn't move my arm for an hour afterward it just stayed in a cramped curl. Strapping to the roof is definitely the way to go.

This year's was a bit under 50 feet long. It's always exciting because the big bamboo grows on a steep (~45 degree) slope. Today the culm fell down the slope but was immediately caught by the tall pine tree. I used it to climb the hill, moving the base 3 feet or so, then pulling myself up by the culm planted in the ground, then repeating the process. By the time it fell loose from the pine, I was up the hill.
Posted by ChrisU at 2:34 PM 1 comments 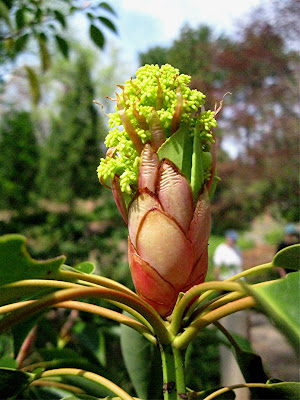 Good sunrise this am

The Universe nodded it's approval as we returned unexpectedly? to work today.
Posted by ChrisU at 6:02 PM 0 comments

Iris henry and Anemone nikoense in the GCA Perennial Border 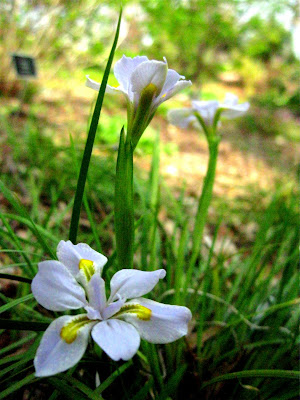 There are large perennial beds below the GCA Circle in Asian Valley, and they have several issues.In my memory they have been shady beds, though when the circle was first built there was plenty of sun. In recent years we have lost a number of trees so that what were shady beds are now quite sunny; actually last fall I moved a rose, 'Hume's Delight' into the border and expect it to do well. So there's an issue with transitioning from shade plants to sun lovers. The other issue involves the beds being contaminated with the fungus Southern Blight. Wow. Double whammy.

Anyway I'm still planting. I'm going to cut back on the watering and hope for the best. Some things clearly are happy. I've divided many of the Primula sieboldii cultivars to create masses where there were spots. Amanda divided and replanted Hellebores and Hostas to the same purpose. I brought in a tall Polygonatum and a Disporum to add some vertical structure and we're going to move in some Hedychium for the same reason. The hardy gesneriad groundcover, Hemiboea subcapitata, has come through the winter raring to go; I'm almost worried it's a little "too enthusiastic", but if it is we can reassign it to the outlands of China Valley where we need ground cover.

Iris henryi is a cool little plant. The Pacific Bulb Society: "This rare iris is a choice little Chinese woodland species..." And so it is. the evergreen leaves are narrow, less than 1/4 inch wide; the powder blue flowers are the size of a quarter. Still, it seems like a tough little plant, it's grown a lot in just a year, and I've already got plans to divide it and places for it to go!

Anemone nikoense is a pleasant small woodland anemone. It seems not to have grown much since last summer, but the leaves it has are healthy and it has flowered, so I expect it will eventually grow.
Posted by ChrisU at 5:54 PM 0 comments

Fritillaria thunbergi. Look at those tendrils 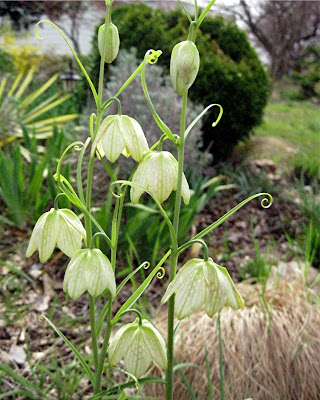 The flowers aren't spectacular but those tendrils. Wow. We grow, in China Valley, Polygonatum cirrhifolium that also clambers with tendril-tipped leaves. Similar strategies. The Polygonatum uses its tendrils on other shoots of the same plant; it can make a mess. This Fritillaria doesn't seem to do that.
Posted by ChrisU at 5:23 PM 0 comments