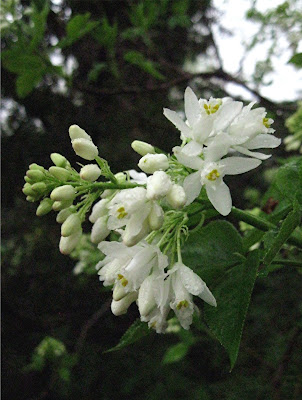 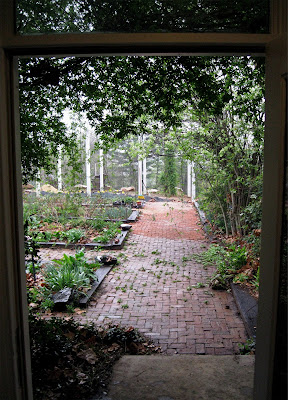 Went to Jim and Dan's today to help out with Jim's garden tours. He invited the Master Gardeners of Frederick County, Montgomery County, and a garden club, Takoma Park to an open garden day. The garden never ceases to amaze me. I've been there dozens of times and every time I find something incredible I've missed before. Almost every time I go Jim has finished some huge project. Half the beds in the bottom picture, the redder bricks, and the pergola have all appeared in the last 7?!? months. Roses are already on the pillars and the flagstone and bricks are waiting to complete the paving.

Many of us have admired the Staphylea in the top picture over the years without really identifying it. Jim believes it's one of the hybrids developed in the last quarter of the 19th century. Whatever it is, it's a spectacular plant flowering more heavily than any I have ever seen. And it's fragrant. Jim brought down a sucker last year to the Arboretum and I transferred it to Richard Olsen, but somehow, it didn't survive. Later this spring or early this summer, I swear I'll get back, take some cuttings and we will grow this plant!
Posted by ChrisU at 4:24 PM 0 comments 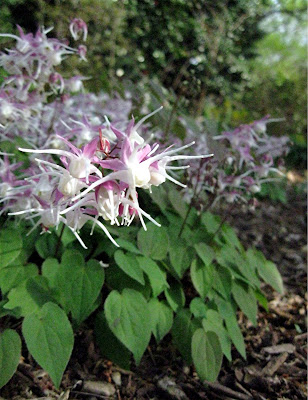 Or 'tama-no-gempei'. It's a nice bi-colored selection. The flowers are large and there are a lot of them. This plant is growing near the Chimonanthus overlook above the low wall and the path that leads north towards the camellias.
Posted by ChrisU at 12:01 PM 0 comments

Sundog over the Capitol Columns....I knew it was going to be a good day 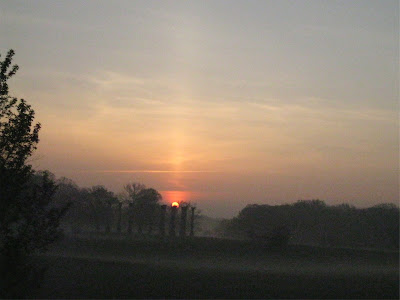 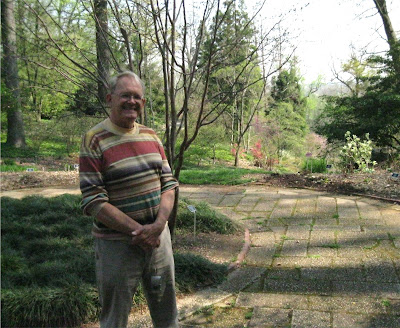 Barry is a famous horticulturist, and no, that's not an oxymoron. Hey, he's got a hosta named for him! I worked for Larry Lee in the early 1990's; Larry succeeded Barry as curator of the Asian Collections. Barry has held various prestigious positions as a horticulturist. He owned the extraordinary nursery Asiatica, now owns a nursery in Bangkok that produces, duh, tropicals. Before he was at the Arboretum, he was at another of my favorites, Brookside Gardens, in Maryland. He went on a number of collecting trips to Eastern Asia for both the National Arboretum and Brookside Gardens. I am privileged to grow many plants he collected.

One of the big things he did at the Arboretum, was design and oversee the installation of the Central Valley including the watercourse. I would have loved to have talked about the collection but didn't want to intrude. The visit was clearly casual, not official, but it was fun to meet him again. I remember distinctly being introduced in 1991 by Larry on the China Valley path. If things work out, I'd love to walk the collection with him someday, but if that doesn't happen, it was great to see him today.

Catalpa bungei leafing out and C. speciosa for contrast 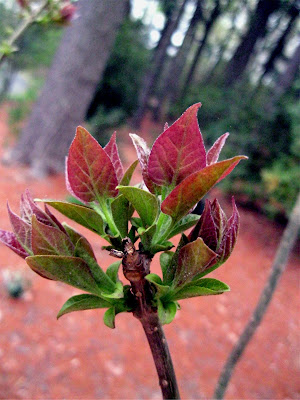 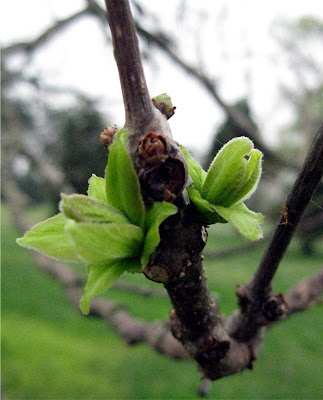 Okay, I don't know who these people are or what they're doing, but God bless America 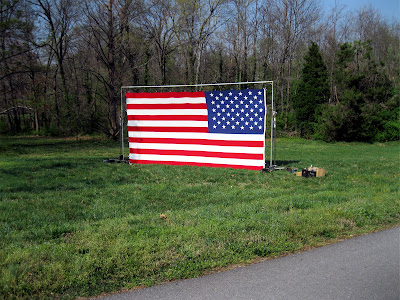 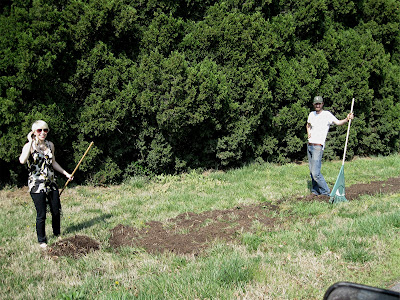 They put up a large flag, that's good, obviously meant to be views from the other side. And they fiddled around with this soil in the grass for most of the day. Rumor had it that there was/is going to be a photo shoot later for a women's clothing line? store? I don't know. There were supposed to be models but none had surfaced b the time I left. She's pretty but I don't think she was one of the models. He looks like he'd be up for it. Except he likely wouldn't wear women's clothes. I stopped just to say hello but didn't interrogate them. Apparently Ed had stopped earlier and they asked me if everyone here loved their jobs as much as we two did. I considered for a moment and then had to admit that most people here felt the way about their jobs that either Ed or I did.
Posted by ChrisU at 3:54 PM 0 comments

Caragana sinica, Chinese pea shrub, at the base of Korean Hill 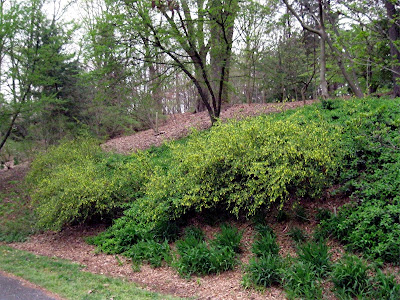 The plants look great. Actually Korean Hill, the least successful part of the Collection, garden-wise, looks pretty good. Give it a few weeks.

Caragana is in the Pea Family. There are around 80 species. I remember Wayside Gardens offering a species, I think C. tibetica, as a standard. It must have been the early 70's or even the 60's because the concept of growing a plant as a "standard" was new to me. Our plants are nice this time of year, another yellow for the early spring design palette. There isn't much going on the rest of the year though the bark has a pleasant smell. The flowers are eaten in China for health. They have been shown to be strong antioxidants. I'll eat some tomorrow.I can use all the help I can get!
Posted by ChrisU at 4:06 PM 0 comments

See the green at the top of the trees? That's about 3 weeks premature 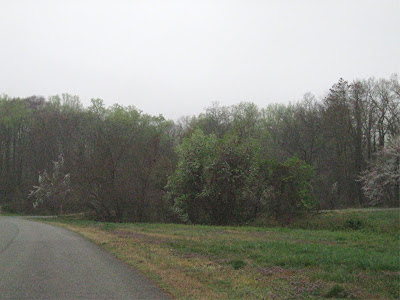 I know when the forest leafs out in Washington because I've been watching birds here since the 1960's. I love warblers, they are like feathered flowers or jewels. They come in colors you have to see to believe and they generally hang out in the top half of medium to large trees. They are small, smaller than most oak leaves, smaller than tulip poplar leaves, smaller than sycamore leaves. Spring migration brings waves through the area; they start in mid to late April and drop off after mid-May. I always loved the early waves, mid-April, because the leaves hadn't expanded fully leaving the birds less likely to be hidden by foliage. Now, it's been years since my eyes have been good enough to find warblers in the tops of trees, but I still listen to them. Their songs are distinctive. And I still remember when trees leaf out in Washington. Normally it's about three weeks from now.
Posted by ChrisU at 3:45 PM 0 comments 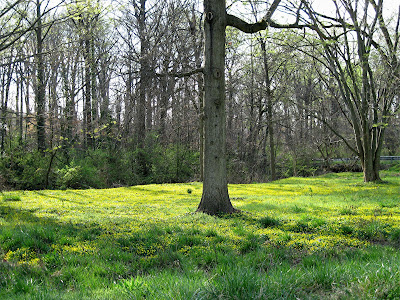 Isn't it pretty? This is an "enthusiastic" non-native that rampantly colonizes bottomland sites. Like so many of our early spring wildflowers, it is a "spring ephemeral". That means it's genetically programmed to flower, set seed, and then go dormant. Unfortunately it outgrows the natives that used to occupy this site. On the radio today, I overheard discussions as to who was going to dispatch this colony and when, so I drove over to get a look. It is beautiful even if it does have to go.
Posted by ChrisU at 3:51 PM 0 comments

Lindera aggregata flowering along the steps below the Pagoda 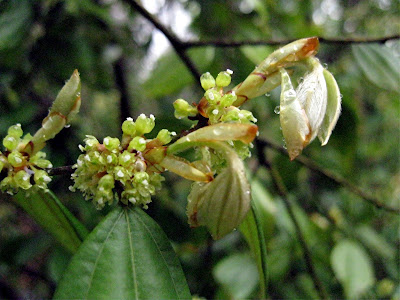 One of the first decisive things I did after coming to the Asian Collections was to prune this plant. It grows possibly 4 feet from stone steps that descend from the red pagoda and lead you into China Valley. It was about 15 feet across and an opening had been pruned into it making transit up and down the steps possible. It didn't look good so I attacked with a vengeance. Not really; I like the plant. I pruned severely but not excessively and with absolutely no malice. Over the ensuing three years it has grown out and looks more than presentable. I stopped today to photograph the flowers; if I'd thought that I'd be writing this post I would have taken a picture of the whole plant. But I didn't. I was intrigued by the odd flowers and photographed them. I did take time to examine the plant. If we take out two major canes, it looks like we'll have a graceful plant that fits the location. For now.
Posted by ChrisU at 3:42 PM 0 comments 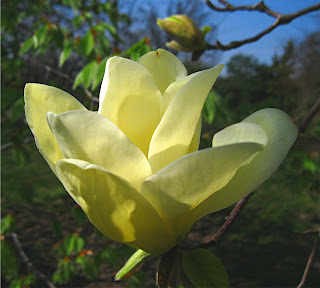 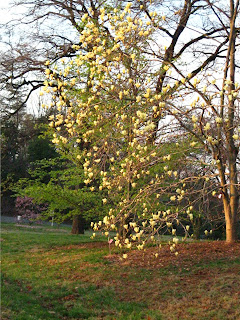 The morning sun turned the creamy yellow/white flowers of M. 'Elizabeth' to true yellow. A hybrid between M. acuminata (our native cucumber tree) and M. denudata, the Chinese Yulan magnolia, this is one of the earlier products of crosses made in an attempt to produce yellow magnolias. Well, there have been many more since and there are a lot of cultivars more yellow than this, but I still have warm feelings  for this plant that I planted 21 years ago.
Posted by ChrisU at 3:42 PM 0 comments 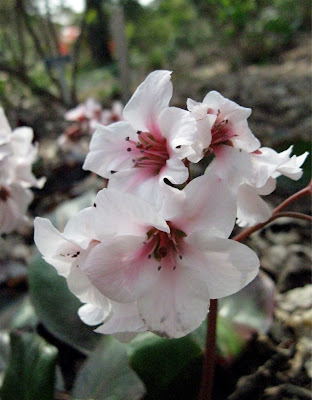 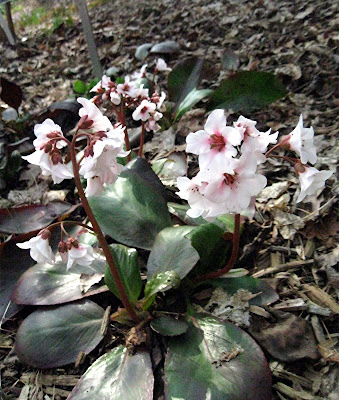 This is a plant that grows on you. Plus it's another species, or at least it's a selection of a species, from the venerable Mt. Emei. Actually, I spent a good bit of time, by internet standards, researching the cultivar and was unable to determine whether it was a hybrid (I suspect it is) or just a sport.  B. emeiensis is supposed to have white flowers and leaves that are largely green. These flowers are pink and the leaves quite red all winter.

When  I was a young gardener I became enchanted by bergenias, or at least by pictures of bergenias. The plants themselves never really measured up, and I nodded to myself this evening as I read the "Bergenia Troubles" thread on Gardenweb. I had encountered those same issues: pests, notably slugs, in the summer and generally ugly leaves in the winter. I love evergreen perennials but what's the point of being evergreen if the leaves are ugly in the winter.  And so I wasn't terribly enthusiastic about this plant when I moved to the Asian Collections and found it growing at the GCA Circle. Well, I haven't encountered the old familiar problems with this one. Apparently the Chinese species are more heat tolerant so maybe the plant isn't giving out distress calls that lure in pests. I don't know what's going on in the winter but I'm not going to look a gift horse in the mouth. I divided it last year and moved pieces to a more visible location.
Posted by ChrisU at 3:32 PM 0 comments