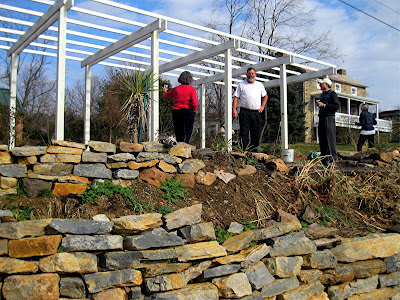 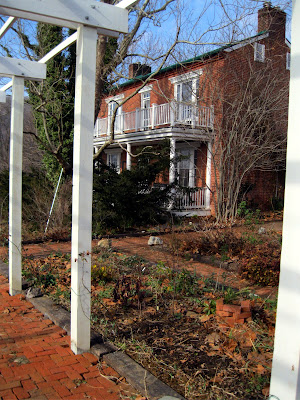 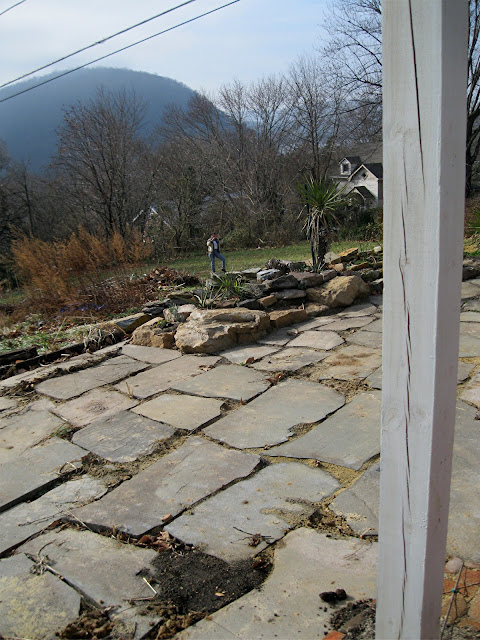 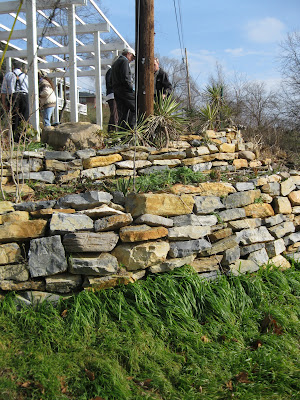 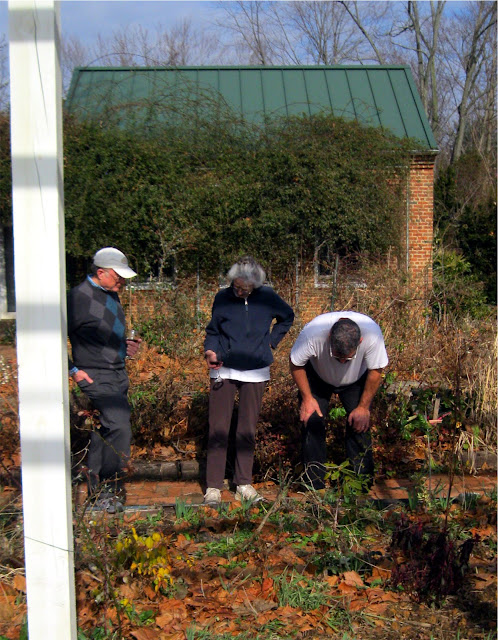 It's the social event of the year for plant geeks. As usual, Jim Dronenberg has added a section to the garden he's been working on for so many years. This time he's added, to the brick paving and tie beds of last year and the huge arbor, each post planted with a different climbing rose, a new section of large crazy paving edged with a border of boulders and stepping down into two large terraced beds built from salvaged limestone pieces. It's largely complete with many sections already planted. I can't wait for next year to see the roses et alia.The view across the Potomac River into West Virginia is spectacular from the new terrace. When the Yuccas come into their own the garden will look like a transplant from the sunny shores of the Mediterranean. As always I can only marvel at Jim's capacity to get things done.

There were ~60 attendees including many of the most serious plant geeks of the mid-Atlantic. Excepting the sin of gluttony, we behaved ourselves admirably and a good time was had by all.
Posted by ChrisU at 3:32 PM 1 comments

Don Shadow and Meg at the MANTS Show 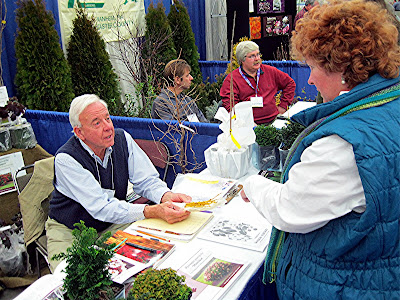 I met up with Meg and we walked together for a while this morning. When we came upon Don Shadow, he was trading anecdotes with Mike Dirr. That's pretty cool.  I tried to get a picture with all three of them but it didn't happen. In this photo Don is showing Meg budwood from the insanely colored golden Sophora/Styphnalobium.
Posted by ChrisU at 4:14 PM 0 comments 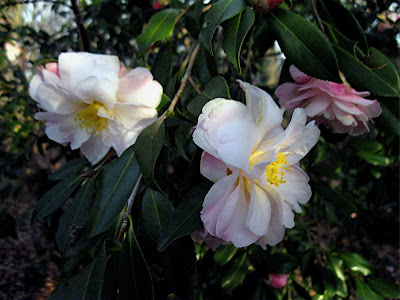 The camellias just keep going. This one is in the vernalis group. Apparently is is an old group whose origins aren't entirely clear. My research tells me that these are hybrids between sasanqua and japonica. Maybe. Horticultural nomenclature eludes me though I studied Latin through high school and taxonomy through college. Oh well; it sure is pretty.
Posted by ChrisU at 2:59 PM 1 comments

Anemone hupehensis flowering on Jan 8 in the Asian Collections 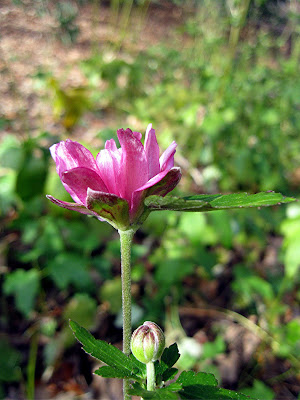 Florida was great but it's good to be back in the collection. I resumed weed whipping perennials. I think this was the last patch of anemones. I left this stalk that was still flowering. I doubt it's a record but it's definitely out of the ordinary. Temperatures rose into the mid-50's F today. That's more than 10 degrees above what we would normally expect. This morning I read that last year is now officially the hottest on record for the continental United States. So far this winter has been somewhat warmer than average but I see some cold temperatures forecast starting in about a week. Today was perfect for working in the garden; warm enough to not be cold and cool enough to not be hot!
Posted by ChrisU at 6:20 PM 0 comments

Just got back from almost two weeks in the Florida Garden


It was unseasonably warm for most of our visit which was nice; a good winter for butterflies so far. I love these Zebra longwings. They seem to travel in small groups. I never saw fewer than three at a time. They seemed to particularly like the Jamaican Porterweed. I was hesitant to plant this as it is sometimes aggressive. It's stayed to one plant for the past two+ years. I suspect it would be more trouble if the garden were irrigated. Anyway these guys were all over it. They flew right past the butterfly weed and various southwestern salvias to get to it. A little research revealed the curious fact that this species is one of a very few butterflies that is able to "eat" pollen. They apparently secrete some fluid that dissolves the grains. Huh!

The garden itself was in quite good shape. Most years the dry season plus a frost or two, leave it a mess. This year there had been only one frost and rain has come in dribs and drabs so things were pretty presentable. We have one camellia, 'Pink Chablis' and it had one flower, its last of the season, on it the day we arrived. Oddly, that has happened twice before in previous winters. The first time I took it as a happy coincidence. Now I'm not sure it isn't an affirmation; the garden welcoming the gardener back. The gardener was happy to be back!
Posted by ChrisU at 2:52 AM 1 comments