If you counted all the Bonsai trees east of California and divided by two, I think Eves has about that many plants 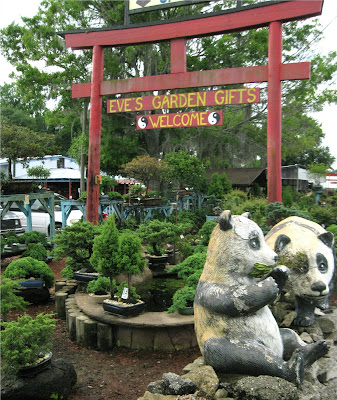 Drove past it (in Land O Lakes, Florida), couldn't believe it, had to go back. Wow. thousands of trees and thousands of pots: half an acre or so by my calculations. A few starter plants and nothing else! I'm not qualified to comment on the quality of the productions, but the trees were all healthy and hadn't been just potted. I suspect they had "potential" as they just felt unfinished. Though I suppose a tree is never finished. 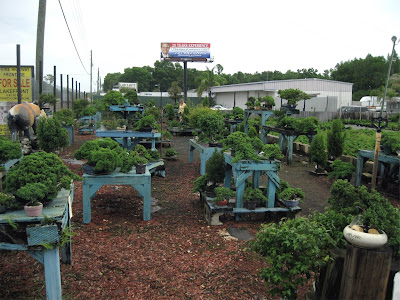 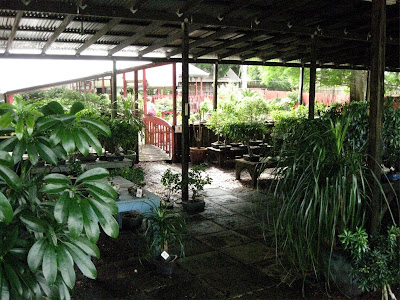 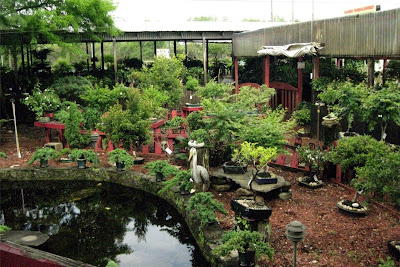 When I looked up their website, I wasn't surprised to find that they wholesale plants. They had so darn many and they're a bit off the beaten track. I include the link, though the Nursery is 100 times more impressive than the website.
Posted by ChrisU at 6:48 PM 0 comments

Ruminations on the state of the Florida garden

Kathy's right; we do judge our own gardens more harshly than others. I'm trying not to get impatient with this garden. I spent the past few days cutting back winter-kill, weeding, planting, transplanting, and mulching. The garden looks good now but it still comes slowly. The older beds, by which I mean the 3-4 year old beds!, are coming along nicely, but I added beds almost every trip for the next three years and so many of them are still underdeveloped. I don't think of myself as a person who demands immediate gratification, but I am getting a bit impatient. Maybe it's just the full moon.

This past winter was cold. There are many ways to measure how "cold" a winter is, but by any yardstick, this was a bad one. Having said that, nothing died but the Lime, and apparently they aren't hardy in Zone 9a. At all. There was significant die-back. Most of the larger Agaves were killed to the ground. The Firebush also, and Jatropha integerrima, both of which are already flushing out nicely. Most of the Dianella apparently were killed to the ground but have come back some, though they aren't the presence they used to be. I have a few selections of a different species with thinner blue leaves and none of them seems to have suffered any cold damage. Interestingly, Aloe saponaria seems to have not been affected at all by two weeks during which temperatures dropped below freezing every night. This plant is one of the repetitive elements in the  design and all the colonies are growing cheerfully with flowering spikes on several of the plants. They seem to bloom year-round, though late summer/fall/early winter seems to be the heavy season. Hummingbirds prefer this to all the other hummingbird plants in the garden.

Coontie, the native cycad, Zamia spp. has begun to spread from it's initial planting (by the driveway)  and I put another into an adjacent bed. They are wonderful plants; it's good to see them used in mass commercial plantings. Wilcox Nursery had several hundred in one  gallon pots this trip. Usually it's in a 3-gallon and costs about twenty dollars. Even at the box stores?!?
Posted by ChrisU at 6:24 PM 0 comments 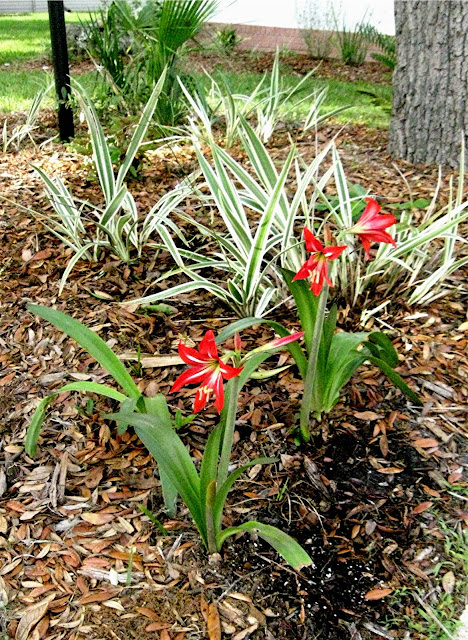 This hybrid Amaryllis is a plant I have been wanting since I began this garden. It has reportedly been grown in Zone 6 so there's no problem with hardiness here in 9a. I divided the pot into three clumps and planted them in a triangle. The variegated white monocot behind the Amaryllis is a variegated form of Dianella, an Australian native. They took quite a beating this winter; much cleaning was required. Barely visible on the left side between the Sabal palm and the Dianella, is the regrowth from Hamelia patens, the Firebush. This Florida native died back from a 5'x4' plant but will recover this growing season. Some years it's a shrub,some a die-back perennial. Always, a wonderful plant.

We've never been down here thiis late, early?, so I hadn't realized there are three other clumps of this Amaryllis in the community. The hybrid is purportedly over 200 years old and has traditionally been a passalong plant. Plant Delights and Brent and Becky;s are among a good number of nurseries that now offer it.
Posted by ChrisU at 3:31 AM 2 comments

Spring clean-up in the Florida garden 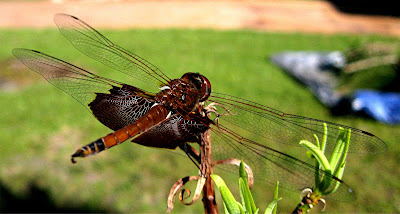 I noticed some tip dieback on this Podocarpus, took a closer look, and found this cool dragonfly.
Posted by ChrisU at 3:40 AM 0 comments