Amsonia hubrechtii in the planting at the Capitol Columns 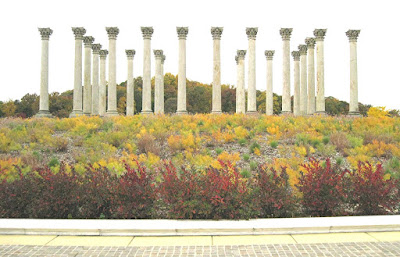 If you wondered why the native perennial, Amsonia hubrechtii, was chosen as one of the components in the planting, this is why. Wonderful fall color....in a plant that's sturdy, dependable, and until recently virtually disease resistant. Only in the last few years have issues arisen with regard to rust; apparently there are strains of rust to which Amsonias can be susceptible. I suspect that this planting, once firmly established (next year) will be fairly tough. In addition to the annual grass Melinus nerviglumis 'Pink Crystals', the other (perennial) component of the planting is Little Bluestem, a lovely native grass. The Bluestem isn't large enough yet to assert itself in the composition, but next year at this time the Amsonia will be punctuated by warm pink clumps of grass that will last much of the winter.

The red plants in from of the mixed planting are Iteas, Itea virginica 'Little Henry'. This is another native, a shrub, that turns this great color in fall and holds on to a portion of its leaves well into winter.
Posted by ChrisU at 3:24 PM 1 comments

Amanda positions a Maple specimen in a plant press 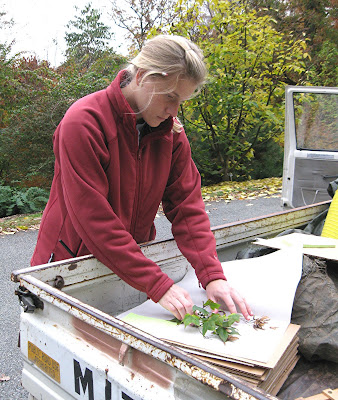 We "vouchered" a list of Asian Maples this week. That is to say we took herbarium specimens to represent specific plants that are in the collections of the Arboretum. It's likely that whoever collected the seeds that the plants were grown from, "vouchered" their collection, that is, took a specimen from the plant they collected the seed from. This spring we "vouchered" the plants when they were in flower. We can't have enough specimens. Actually, those three are the ones we want: 1 to represent the plant the seed was collected from; 2 our plant in flower; and 3 our plant with fruit.

Ours will be added to the existing collection of over 650,000 specimens. We just recently learned that the Herbarium will be able to stay in place through the renovation of the Administration Building scheduled to begin late next year.
Posted by ChrisU at 3:00 PM 0 comments

That's definitely an hourglass so she must be a Black-widow Spider... 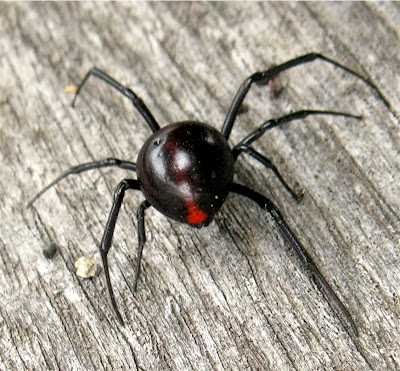 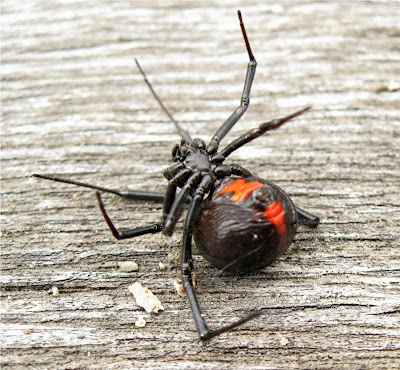 Joan found her under a tarp covering a huge pull-behind leaf vacuum. I chased her (the spider) around for while trying to get a shot that included the hourglass and failed. Eventually I picked her up by a thread that she'd spun and lowered her quickly. She ended up on her back and I snapped the picture. I feel a little bad at having deprived her of her dignity for the sake of a photograph, but on the upside (for her) we didn't kill her. She crawled between two huge wet slabs of oak and I don't expect to see her again. Black-widows are fairly dangerous animals; usually bites don't result in death but once in a while they do. They like it dark and moist and were traditionally habitues of privies; the numbers of bites has declined steeply as indoor plumbing has replaced outhouses.
Posted by ChrisU at 2:44 PM 0 comments

Acer sterculiaceum ssp.franchetii came into it's fall color this weekend 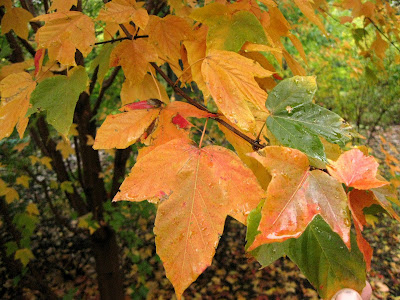 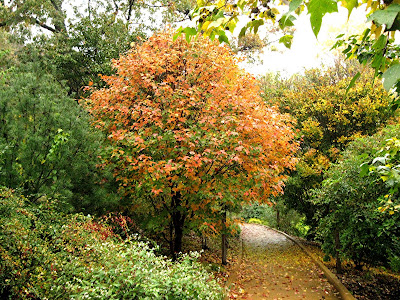 This plant had not a hint of color on Friday. Less than 4 days later it's beautiful.A nice smallish Chinese Maple, it seems to grow fairly quickly and is, so far, free of debilitating diseases. This a a taxa that Amanda has been monitoring for the past year.
Posted by ChrisU at 2:25 PM 0 comments

Enkianthus perulatus, it's really that color 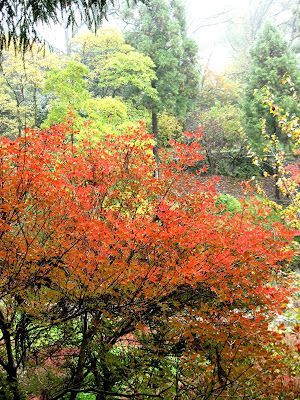 I remember these plants from 19 years ago. They've gotten a bit bigger but the fall color is outrageous and dependable. They grow alongside the path to the red Pagoda. I noticed, somewhat tardily, a few weeks back that a few lower branches on the Cryptomeria above them needed removal; it takes sun to make color. I guess we must have removed them out in time.
Posted by ChrisU at 2:14 PM 0 comments

Double double, toil and trouble....we're fixing so many things we have to work at night sometimes 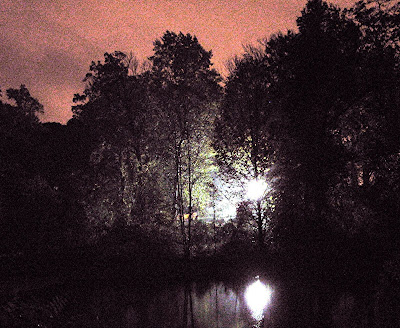 Six in the morning and they're hard at it.
Posted by ChrisU at 2:10 PM 0 comments

The biggest tree at the Arboretum 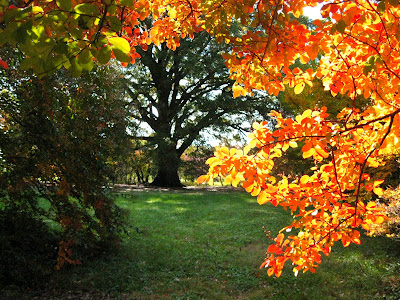 Coming in for lunch, I drove past the giant Willow Oak in the Crape Myrtle Nursery. I stopped actually to look at the Crape Myrtle that was sitting in a pool of sunlight. I decided to shoot through it at the Oak instead. I wonder how many times that tree has been photographed?
Posted by ChrisU at 2:44 PM 1 comments 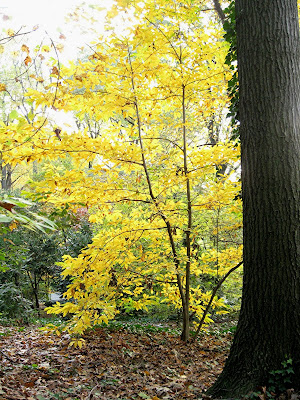 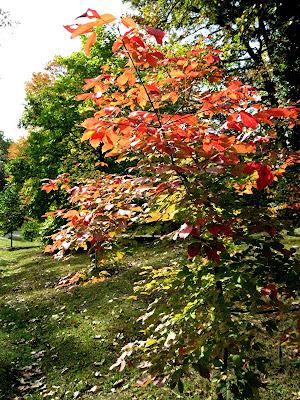 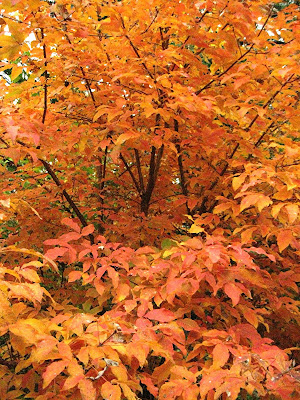 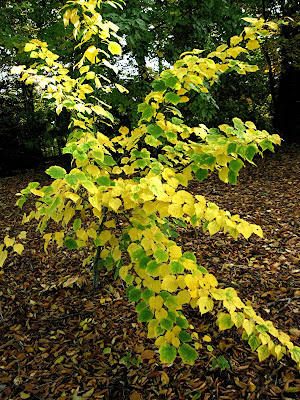 Fall color everywhere; the reds and oranges are tantalizing, but the yellows are good too.
Posted by ChrisU at 2:32 PM 0 comments

The Chinese Pavilion has these most excellent doors 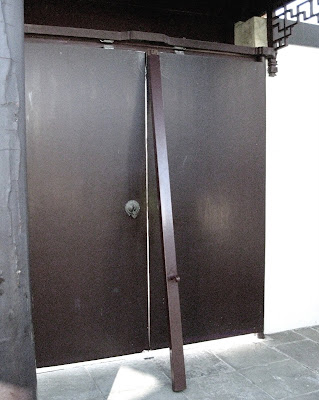 Okay, the doors on the other end of the Pavilion are just regular painted (badly) steel doors with a Yale lock, but these doors....even if there weren't any trees or any gardens, they'd be worth a trip. They're heavy wood with sold bronze door pulls. They're not symmetrical; the meeting edges are bevelled in parallel so that you must open the right one first. The locking mechanism is the large board with the carved handle that fits into a slot in the top of the jamb and the slot in the paving that you can just see below the point where the two doors meet. I always feel as though I ought to be robed to operate them. It's kind of fun.
Posted by ChrisU at 3:31 PM 0 comments

Sunday in the Garden of Bonsai and Penjing...visitors photograph the Crape Myrtle 'Powhatan' 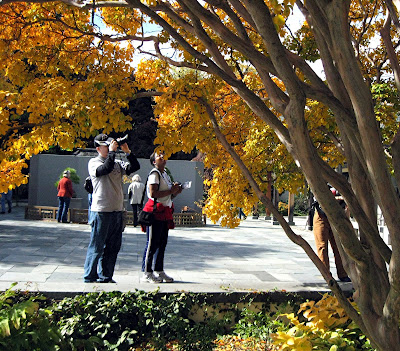 Today was a beautiful day; there were clouds, but the sun was out all day. It began a bit on the cool side, but quickly warmed to a comfortably brisk fall day. I filled in today in the Bonsai and Penjing Museum as Jack was running in the Marine Corps Marathon, and the rest of the staff was unavoidably unavailable. It was great. I couldn't believe the number of visitors. For large portions of the day we had at least 100 people (of course by my guess), the rest of the time we had close to 100, and people moved along at a pretty good clip. They stopped to appreciate the the garden and the exhibits, but still, a large majority of the visitors didn't stay over 20-30 minutes. I don't guarantee the math, but that's considerably more than 1,000 people. I had no idea.

I used Amy's computer for a bit in the am and again after noon. There are windows on three sides of the office, and I don't know the physics of the window covering but I know that I can see out and they can't see in.....very well. I didn't feel vouyerstic though, or I would have stopped looking. Basically every time I looked up I would see different people, usually two or three, taking pictures. Often they were photographing the large central Crape Myrtle, 'Powhatan'. Sometimes it framed a family member, sometimes it stood alone.

Powhatan is not one of your more frequently encountered Crape Myrtles. Looking at this mature specimen, I have to think that that's too bad. The flowers are a liliacy purple, pleasant. The fall color is obviously spectacular, the bark is very nice, not cinnamon or russet, but nice. The habit is likely the limiting factor for this plant. Spreading and bushy, it can eventually take up a lot of room. That's a good thing if you have the space and have planned for it, but on a small lot, either a smaller variety or a more upright one might make more sense. Still...if you've got the room There were at least 1,000 people here today who can sincerely recommend this plant!

And while we're at it, one of the few well grown examples of Cotinus obovatus, our native Smoketree, at the Arboretum, sits adjacent to Powhatan and, thanks to the large number of visitors, got a good share of the admiration and compliments that it so justly deserves. Joan and Amy and I collected seed of C. obovatus on a trip, summer last, so more plants grown from seed from non-cultivated plants will eventually be making their way out into the world.