Spring is here, but it's not April yet (Winter Aconite) 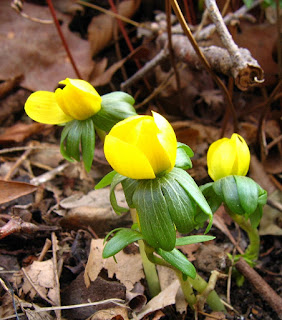 Inexorable is a word with such a negative connotation that it seems odd to associate it with the approach of spring, but...it's the right word. The forces that shoulder winter aside, once in motion are too powerful to be stopped. Our average high temperature on this day, Valentine's Day, is 46F our average low 29F. They are up 3 degrees total (1 on the low end and 2 on the high end) since last week; by this time next week they will be 48 and 31 respectively. There is no doubt that we are climbing the curve.

This week was a balmy interlude on the path to April with highs in the 50s, 60s, and 70s! and no freezing nights. Shrubs and small trees are flowering everywhere, all the Hamamelis, the early Cornus, Prunus mume, Jasminum nudiflorum (full bloom), I give up; there are too many to list. Bulbs too: Snowdrops, early Crocus species, Winter Aconite all flowering. The days are longer than they were at the nadir of the year: by 90 minutes and we are adding 2 or three minutes every day. The sun is moving higher in the sky, its rays striking the earth with greater effect than the feeble glancing blows it attempted at the Solstice. Birds are singing now: Carolina wrens, Titmice, Cardinals. Downy woodpeckers are drumming, a part of their mating ritual...and yet.

And yet, in every conversation I overhear, one curmudgeon, in an attempt to douse the spirits of the optimists, grumbles that, "we haven't seen the last of winter." But we have you know. Winter is over. It may snow.....a lot....one of our best/worst? blizzards was on Washington's birthday, and it will get cold but those things are a part of spring now, not winter.
Posted by ChrisU at 4:15 AM 0 comments 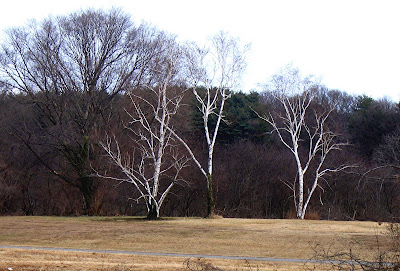 If you go to Google Earth and type in US National Arboretum and look inside the arc of Meadow Road between Beechspring Road and Holly Spring Road, you will see, 2/3 of the way to Holly Spring Road, a huge tree, the Pin Oak that sits behind the left-hand birch. It is one heck of a tree. Scroll to the bottom (south end) of the Arboretum and find Maryland Avenue. Follow it til it ends at the US Capitol; the Capitol dome is a bit larger in diameter than the Oak Tree, just a bit. Its the largest tree at the Arboretum, it's just a quirk of perspective that makes the birches seem to be on a scale with it!

I love this view of the birches. If you were to create a triangle of birches in your mind and create the structures of the trees and the spacing, you would be hard put to do better than this. It is like a living triptych. It looks best from this view: that is, on Beechwood Road, halfway between Meadow Road and Azalea Road. You can drive right up to the birches on Meadow Road, but the effect is lost; they're still nice trees but the picture just isn't the same!
Posted by ChrisU at 4:47 PM 0 comments

Prunus mume 'Shiro-naniwa': Carole Bordelon says it's the earliest one 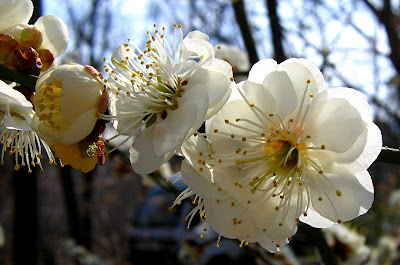 Carole Bordelon is one of two Supervisory Horticulturists at the Arboretum; she is also the curator of the Asian Collections where I now work. Yesterday the whole Asian staff did a walk-through to see how things were going and to decide what projects to address this month. We found this Flowering Apricot in the Camellia Area on the path along the Anacostia River. There were a few dozen flowers open yesterday morning with the temperature in the 40s. Today we stopped by at lunchtime; it was 62 and there were hundreds of flowers open. We saw a medium sized orange butterfly but my pictures were less than spectacular. I think it was a Comma; the last generation sometimes winters over as adults so they are able to take advantage of a day like today. I found spectacular photographs on-line in an article Butterflies of North Illinois. I threw my camera in the trash after viewing these pictures! Among these spectacular photos there is a picture of the Comma.

The Flowering Apricot is only one of a number of late-winter flowering plants that come with wonderful perfumes. Chimonanthus praecox, Wintersweet, has been blooming since late December. Witchhazels have been flowering since early winter starting with the native Hamamelis vernalis, The Ozark Witchhazel and continuing after a mid-winter gap with our other native H. virginiana and the Asian species and cultivars. The first flowers on Lonicera fragrantissima, a shrubby honeysuckle that lives on the SW corner of our house, will open tomorrow or the next day. Similarly Daphne odora growing under the back deck has a number of flowers half open today, all the way tomorrow. Behind it Sarcocca confusa is poised and would be flowering now if it were sited where it got more direct sun. All these plants have delightful fragrances and all of them flower at the end of winter or the very beginning of spring.
Posted by ChrisU at 2:32 PM 0 comments 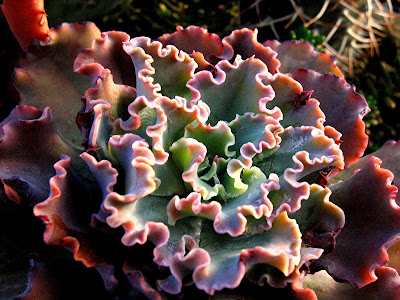 This is an Echeveria, It looks like 'Blue Curls' but I didn't read the label. Echeverias are rosette-forming New World succulents in the Crassulaceae. A little etiolation (stretching for light) goes a long way to disfiguring these plants so unless you have a greenhouse, the best way to appreciate them is to let someone with a greenhouse grow them. Or grow them outside during the summer and accept the fact that they will not look like much in the winter. Bradley Evans, USNA hortriculturist grew this, I expect, to go into a succulent container.
Posted by ChrisU at 4:14 PM 0 comments 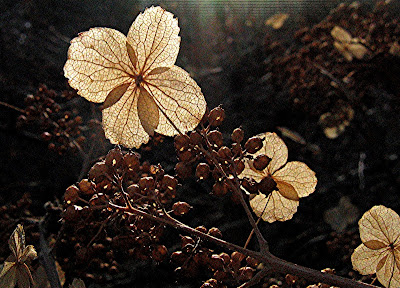 I planted this plant in 1991...actually I planted a lot of them and they seem to have by and large survived. Starting on the "mound" in C-5 (a section of China Valley) they wandered down the watercourse to the bottom of the collection. I remember they were in 1 gallon pots and there must have been almost twenty plants total. They seem to be happy, so far as I can judge from dormant plants!

It is an attractive hydrangea; lacecap type inflorescences consisting of a disc of purple/lavender flowers surrounded by almost white sterile florets. Attractive large leaves add a bit of bold texture to the garden. I really do like it and had a 10 year old specimen until last year when I removed it from the Adelphi garden. Growing in sand, it just required too much watering. It was not happy during dry periods in the summer unless I watered it twice a week or more. When I inevitably missed, its ratty miserable appearance reproved me silently for the rest of the season. I couldn't take it any more. I dug the plant and had it sold to a good home.
Posted by ChrisU at 3:20 PM 0 comments

The Plant Sale isn't the best part of the Lahr Symposium, but it is a very good part. There are usually somewhere around 10 vendors who specialize in native plants. The sale is open to everyone, but Lahr Registrants are allowed early entry...first crack at the good stuff! Trilliums, Hepaticas, Needle Palms, Carolina Jasmine, fragrant azaleas, spring ephemerals...you can buy these plants from catalogues or on-line, but the sale offers you the opportunity to look, choose, buy, then go home and plant all in one day.

This picture of the sales area show the vendors setting up the one day sale. We switch to Daylight Savings Time in early March so the sun won't rise till just about 7:00 for this year's Lahr which will be March 28. I don't know about this Daylight Savings Time thing, hey, by next weekend sunrise will reach 7:00. I like early sunrises so I'm not so crazy about this spring ahead thing.

The symposium itself, Native Plants: in Design will be number 23 in the series. (click on the link for registration information) .If you do register, after, or before? you hit those vendors you will have the opportunity to hear a linup of great speakers (and me) discuss aspects of design and native plants. I will talk about how to add wonderful native to your garden gently and seamlessly.
Posted by ChrisU at 5:02 AM 0 comments

Melianthus, Honey Bush: this is a sculptural beauty and a heavy nectar producer (hello hummingbirds) 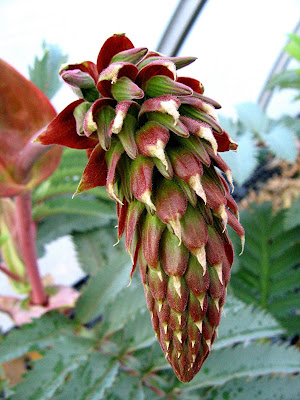 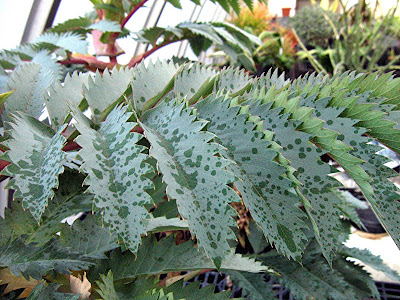 Arising today at 4:45 AM (this is Sunday!?!) I find the temperature has only fallen to 46F. Wow. Excellent. Potomac Phil must not have seen his shadow after all. The 15-day Forecast predicts not many nights below freezing and none for at least a week. Temperatures like that give spring the upper hand in the battle of the seasons; I think it's safe to say that we can predict a winner though it may be some time before all the ballots are counted and the result is official.

Still this is the third day in a row that I find myself discussing African plants. The older I get, not necessarily feebler yet, but wiser?, the less I am inclined to keep large plants that summer outside but need to be lugged in come November. The 7+ foot Gardenia will stay as long as I can physically move it (I've had it for 25 years), the Clivia lives in constant fear, the Bombax ellipticum is fine so long as it fits on a 2-wheel dolly.Still, I'm seriously cutting back....But not this plant; this is one I am going to add! I have always loved it from a distance. The Herb Garden has had a specimen for years, actually this one. As exotic large containers have become commonplace, Honey Bush has begun to appear regularly as an important element in them. I've seen it at Chanticleer, USBG, Brookside Gardens, and other places. Now I want one for my own. Two really. I'm going to try it in the Florida Garden. Leaf color, shape, form, the way light interacts with it all combine to produce an irresistibly beautiful plant.

This will be the first time I'll see it flower. I knew it did because it is universally described as being irresistible to hummingbirds. Southern California, where Honey Bush is reasonably common in sophisticated landscapes, is home to half a dozen species of hummingbirds. We really only have one here, and they probably won't have returned in time to appreciate these flowers, but we'll be here. We'll tell them what they missed.
Posted by ChrisU at 2:44 AM 0 comments