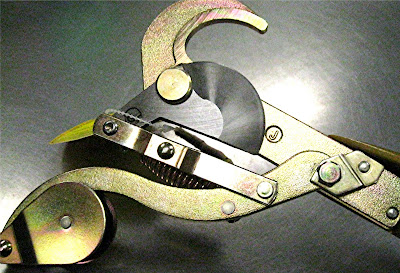 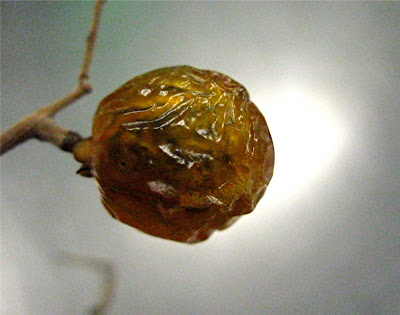 The translucent berries are a good source of saponin and so a sort of natural soap. I just posted the spectacular fall color of this same tree less than three weeks ago. Today the trees are completely defoliated.
Posted by ChrisU at 4:31 PM 0 comments

Paramongaia weberbaueria....alas this year their splendor is on display only to fellow overwintering tropicals! 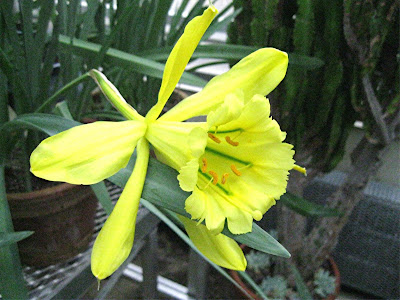 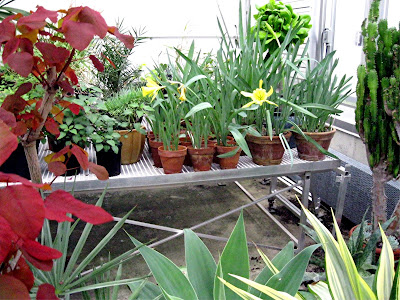 Other years, as they flower they get to come out to the lobby of the Administration Building and strut their stuff in public. P. weberbaueri is a dramatic winter-flowering (South American) Amaryllis relative. As beautiful as the flower is, the light floral fragrance surpasses it.
Posted by ChrisU at 4:20 PM 0 comments 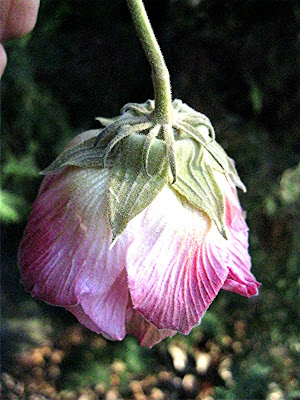 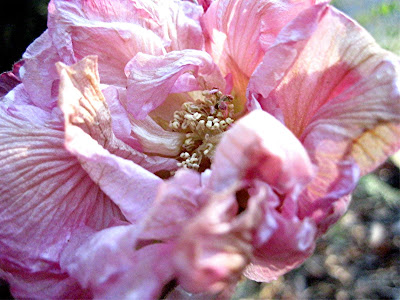 It's good to have something to look forward to. Next spring I'll move it to a hotter location. If it had flowered only a week or two earlier it would have made it.
Posted by ChrisU at 2:25 PM 0 comments 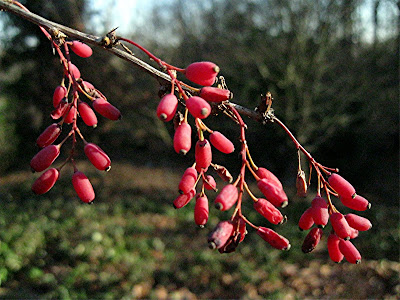 Maybe because, according to our records, this plant is a propagation from a collection of E.H. Wilson. We have it by way of the Arnold Arboretum, which makes sense. We're all a bit wary of barberries in general; they seem to present chemical (and physical?) properties that make them unpalatable to deer and so, are invading natural areas replacing the native vegetation eaten by overpopulations of deer. Haven't seen seedlings of this plant but who maybe different soil, a differnt moisture regimen, a slight shift of temperature and it could begin to spread. So we watch.

Actually, this particular plant is in an awkward location. It's too close to the path and probably too large to transplant with a certainty of success. Amanda has stuck a handful of cuttings and eventually, after we've established a replacement or two, we'll remove it.
Posted by ChrisU at 2:22 PM 0 comments 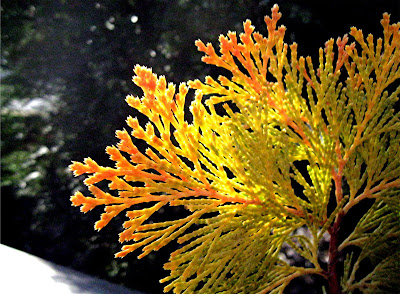 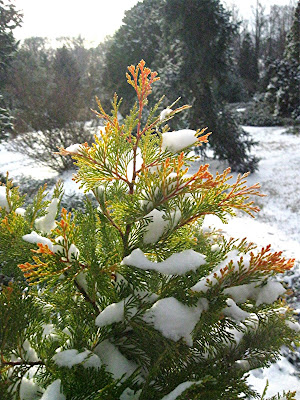 Holy Moley look at this thing. I didn't photo shop it at all; it's just incredible. Coming in this afternoon I noticed it amongst the Conifer Collection plants in our growing area. Mariya tole me there is one in the collection, the Gotelli Collection. This plant will be going out next year? or sometime. I searched and found a label from Forestfarm still hanging on it. They had a listing , but go figure....sold out. This is a plant I would have cheerfully paid the freight from California for. Maybe next year. It's good to have something to look forward to!
Posted by ChrisU at 4:08 PM 0 comments 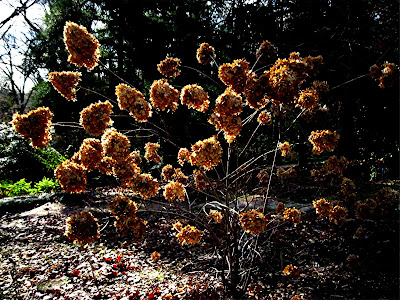 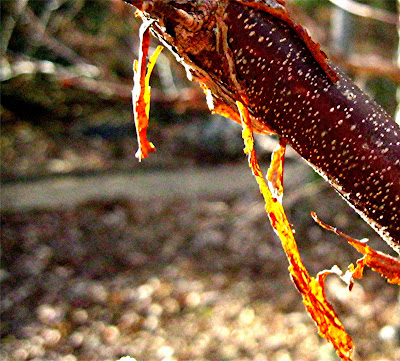 Including the exfoliating bark on this Cornus officinalis and the Hydrangea paniculata 'Limelight' that surely looks different than it did this past summer.
Posted by ChrisU at 4:02 PM 0 comments

Leaf Management III?.....Ed rides the mulching mower; this is a good way to handle a lot of leaves quickly and efficiently 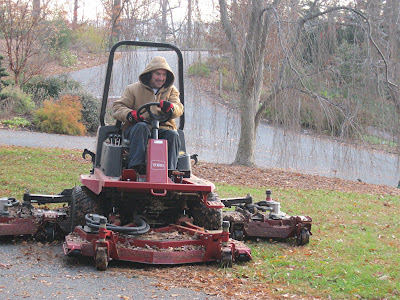 And the shredded leaves return organic matter and trace amounts of minerals to the soil. We don't fertilize turf so the grass appreciates our autumnal offerings.

Not only is this a great way to deal with leaves shed by trees in fields, in many places it's possible to move some leaves out of adjacent areas that need to be cleaned and "process" them this way saving significant amounts of time, money, energy, two-cycle exhaust....
Posted by ChrisU at 3:52 PM 0 comments

More leaf management; we leave the leaves in beds with evergreen perennials 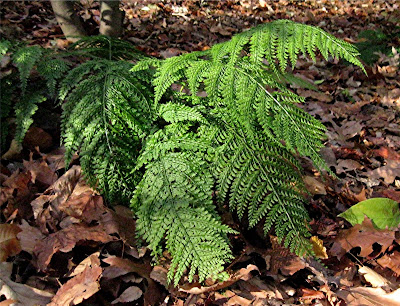 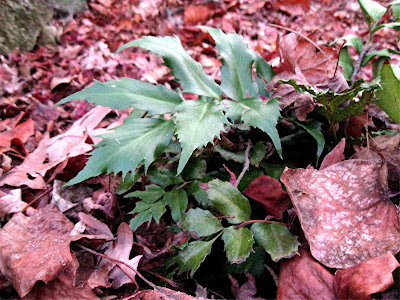 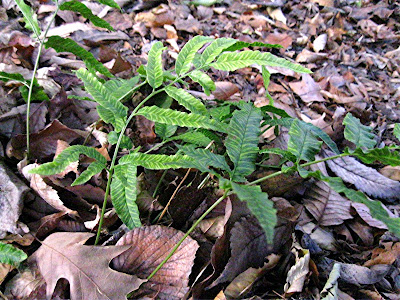 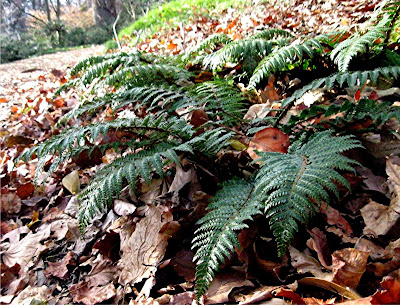 It keeps them cosy, moderating the rise and fall of temperatures in the top few inches of the soil. Temperatures fell into the low 20's F last night but these guys look great. From the top they're Arachniodes standishii, Cyrtimium falcatum, Coniogramme emeiensis, and Polystichum polyblepharum.

Other evergreen perennials appreciate this kind of airy leaf mulch; Hellebores, Epimediums, Asarums among others. Leaves constantly moving in the wind are trapped under the plants. During my weekly "touch-ups" I will remove excess leaves that may mound or mat against he plants. That's more an aesthetic issue; still important though.

Pelargonium 'Fruity', thats a good name and, well I'm sorry I don't know what the pink one is 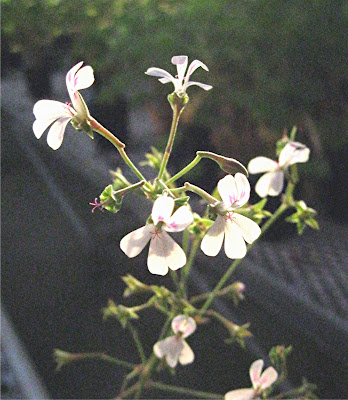 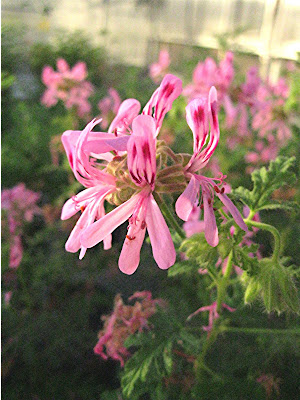 The Salvias aren't the only attractive flowering plants that the Herb Garden is overwintering under glass, or plastic. Many of the scented Pelargoniums have attractive flowers to complement their....bracing fragrances.
Posted by ChrisU at 4:29 PM 0 comments 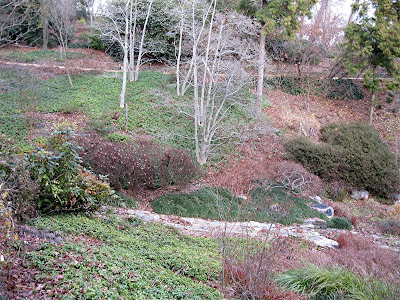 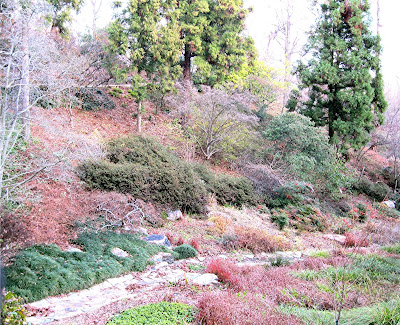 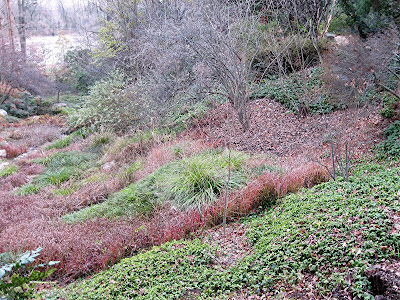 It was cold today, maybe not as cold as it is across the Atlantic, but still cold enough to not want to work outside for more than a couple hours at a time. Most of the fire has gone out of the landscape but it remains beautiful though muted. These pictures contain the area I'm going to redesign this year. I like the stark trunks of the mature Magnolia stellata in the top picture
Posted by ChrisU at 4:22 PM 0 comments

Overwintering tropicals...it's close quarters but its better than being outside 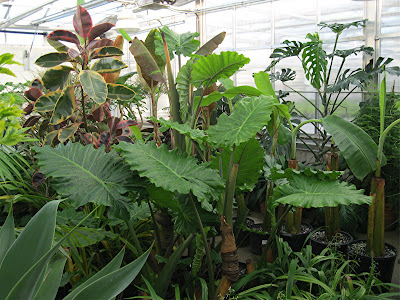 Brad lured 'em in by telling them they'd be spending the winter in the tropics....well, now they're standing shoulder to shoulder on a concrete floor, but it's warm and humid and occasionally someone wanders in to admire them. And of course next year they'll be able to enjoy another Washington summer. Life isn't all bad.

I snuck in an anonymous "midnight donation" last week; a jewel orchid, Anoectochilus, that I'm finished torturing. I bought it three years ago at an NCOS show and it's had three leaves ever since.....not the same three by any means. I could see it heave a sigh of relief when I set it on the bench amongst its familial kin. I'll visit it regularly but it has defensively gone to a better place.
Posted by ChrisU at 4:01 PM 0 comments 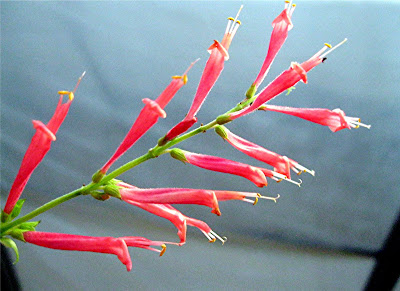 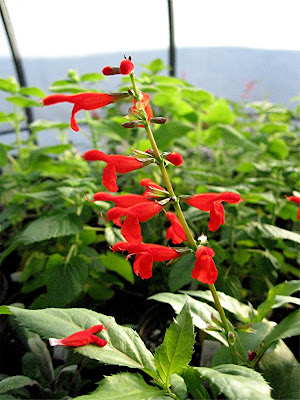 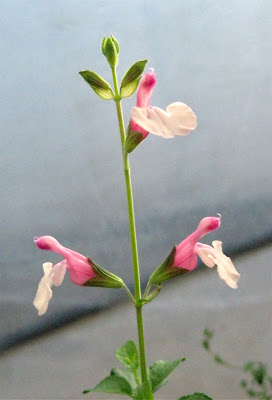 found three more flowering salvias in Poly 7; whatever else happens this winter, I'm developing an appreciation for the flower structure of Salvia.
Posted by ChrisU at 3:03 PM 0 comments 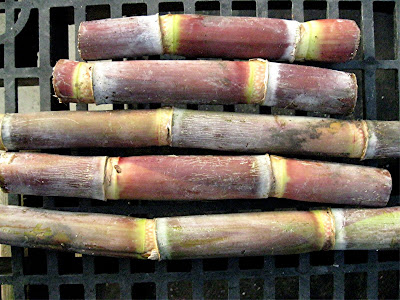 I walked through Polyhouse 7 to chek on our tropical camellias (buds are swelling) and I came upon this stack of sugar cane canes waiting to become propagules.
Posted by ChrisU at 2:56 PM 1 comments 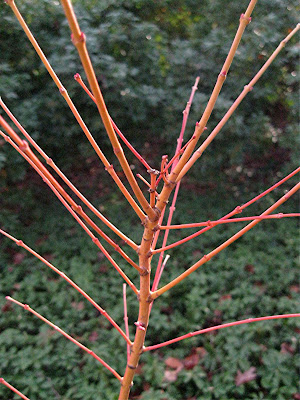 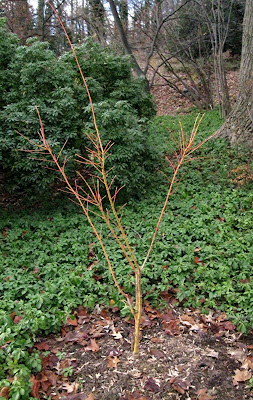 We got this is an excellent small maple from Fred Hooks at All Things Acer. If it colors as it did last year it'll lose some of the red/orange and end up mostly yellow. We were disappointed when deer savaged this plant a couple of months ago. It actually looks like a pretty good pruning job; he exposed a wonderful trangular framework. The only problem is that one of those branches is only attached by a thread. And it wasn't really splicable. Well at this tender agie it'll be able to recover. Next fall though, I'm caging it.
Posted by ChrisU at 2:34 PM 1 comments

Extinct! Are you smarter than a plant?