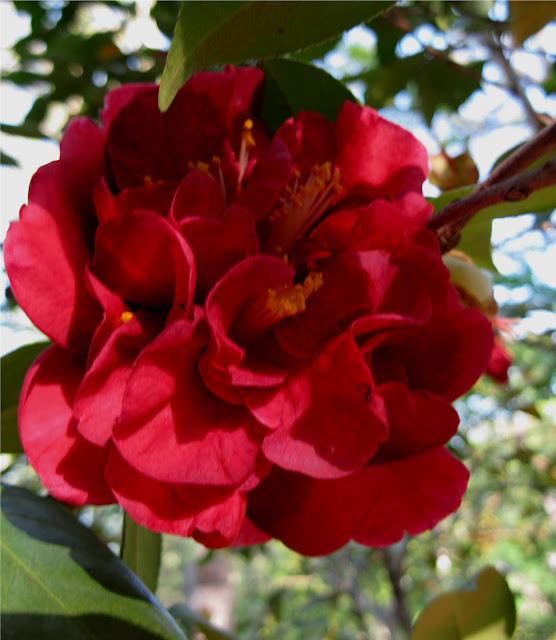 We had a very early season!
Posted by ChrisU at 11:55 AM 0 comments

The weather we're experiencing now, that is to say the drought, is potentially very hazardous to recently planted woody plants. We haven't had significant rain for over a month. There's not much water left in the ground that plants can reach. When they're leafing out or putting on new growth, now that is, they need abundant water. Normally we have it this time of year so this is when most new growth is put on. If a plant is trying to refoliate and doesn't have sufficient water, it begins to sacrifice itself. In a drought of these proportions that can mean losing small branches or even large important limbs. For the most part trees and shrubs look okay, but here and there I see damage or the beginnings of damage. Also leaf cover seems to be sparse and small. Many dogwood bracts are half their typical size. A huge Norway maple next door is dropping samaras less than half the size they typically are. If we get rain soon most things will be okay, but if you have newly planted woody plants, this would be a great time to run a lot of water inside their drip-line.

Drought in summer is easy to spot, expected, and plants are better adapted to it. This is blindsiding plants and gardeners alike. I have noticed, after 50-odd years of watching, that while they are adapted to survive the vagaries of the universe, they are not adapted to be attractive all the time. It's our job to keep them looking good; that's part of gardening! Happy watering.
Posted by ChrisU at 11:47 AM 0 comments

Was this really Friday the 13th? Is it still? I guess so.

It was a great day in the garden. Carole and I hit the visitors with a two-pronged attack; she chased them around the north side of the collection with the irrigation, and I blew clouds of pollen into the air on the south side. Actually, I blew as little as I could and finally gave up. I was afraid my yellow clouds would encounter visitors with clothing wet from the rainbirds. That would have been bad.

On Fridays, I like to walk through the collection with a backpack on low: clear the paved areas of leaves and what not; spruce up the mondo grass near the path; generally move mess back into the middle of the beds where it's not so visible. This time of year it's really impossible. We have visitors all day, which is a good thing but I've never been one to use a blower around visitors. Next week I'll try Thursday morning first thing.
Posted by ChrisU at 3:20 PM 0 comments

Camptotheca accuminata after a warm winter 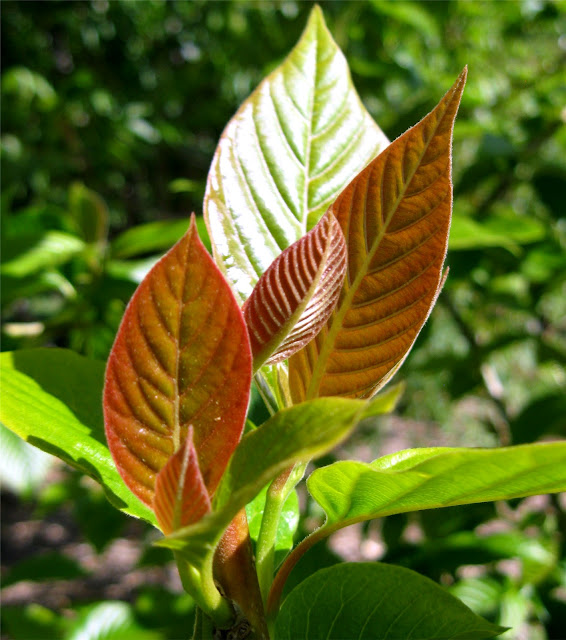 I don't think anyone was in much doubt, but if they had been, this winter would likely have convinced them that this plant is in a place that's a bit too cold for it. Every winter it suffers dieback from 25% -33%. Except this winter there's essentially no dieback. Which makes me happy because I love the foliage.
Posted by ChrisU at 3:11 PM 0 comments

Tree Peonies in the Asian Collection 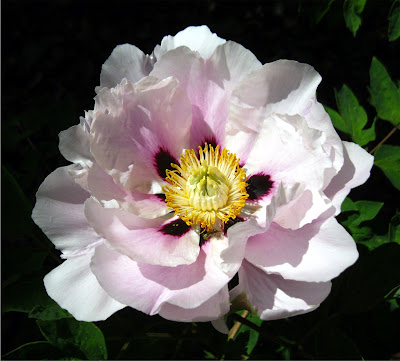 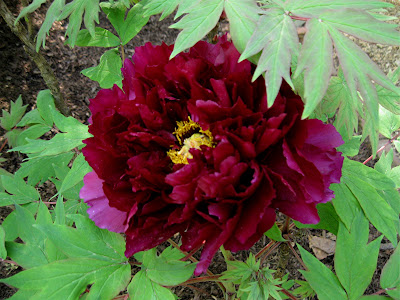 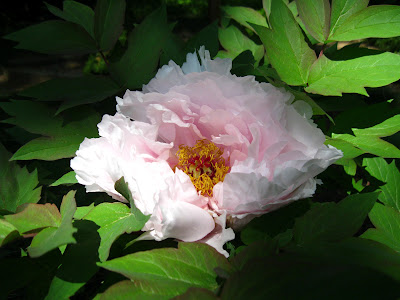 From the top; Paeonia (Gansu Group) 'Hui He'; not sure; Paeonia 'Yae-zakura'


The tree peonies are in prime bloom. A few very early ones are done, most of the midseason plants are in full bloom, and the late ones have a few flowers. The Tree Peonies in the Asian Collection are generally scattered about.  The GCA Circle has half a dozen plants, as does the area behind the Chimonanthus overlook. Along the path to the Pagoda there are another half-dozen or so. The balance are single plants and there are a lot of them!
Posted by ChrisU at 3:07 PM 0 comments

Today was volunteer day in the Asian Collections (this is the entrance to the Cryptomeria Walk?) 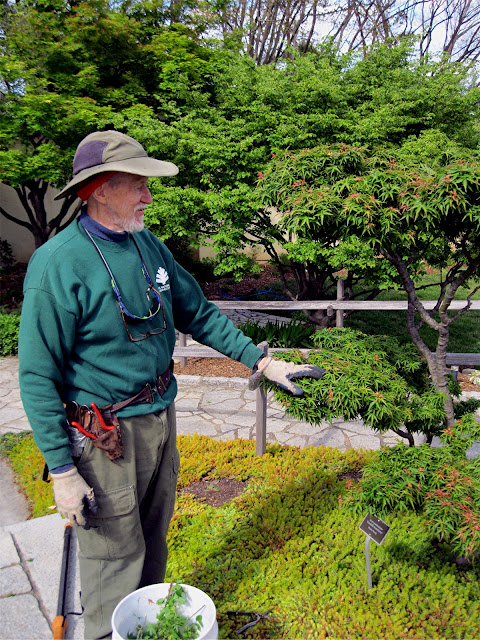 we had eight volunteers and the did a ridiculous amount of work. Heading in at the end of the day, I noticed volunteers at the entrance to the Bonsai Penjing compound. Richard Winchester was working on the Acer palmatum 'Goshiki kotohime'. He has a long range plan for developing the tree. Gardening requires both faith and patience. Oh yeah, time, it requires time.

This plant came originally from the Asian Collections where it had languished in low light for years until Pat took pity on it and dug it for relocation. It's a wonderful maple but as Richard observed, when a tree only grows a couple of inches a year, it takes a long time to make changes. We decided we both hope to be around long enough to see the realization of his plans for this tree.
Posted by ChrisU at 3:30 PM 1 comments

Yesterday I asked Joan what was photogenic in Fern Valley.... 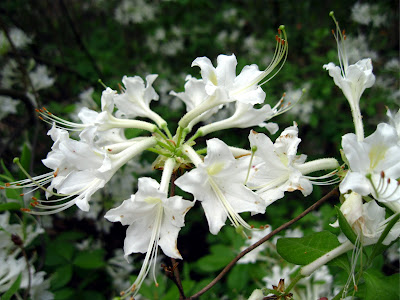 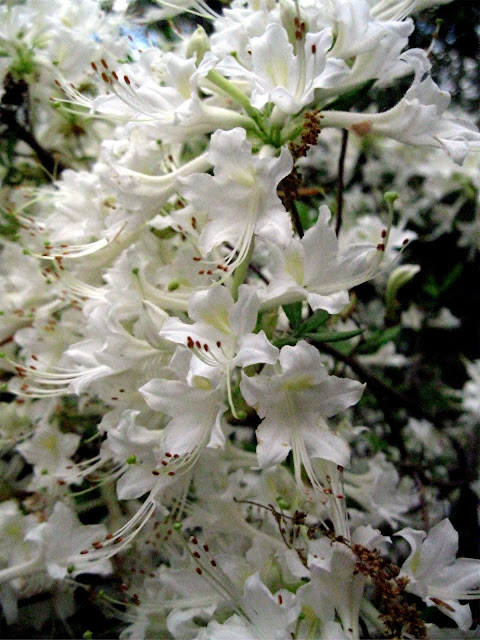 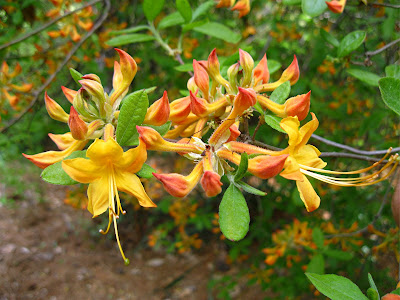 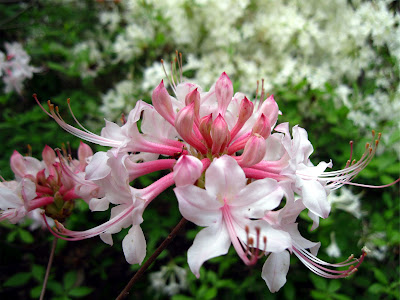 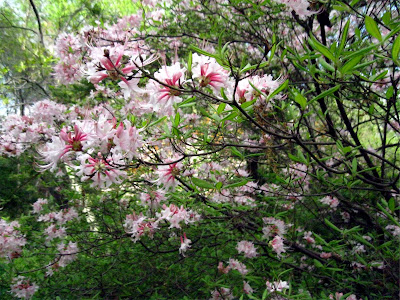 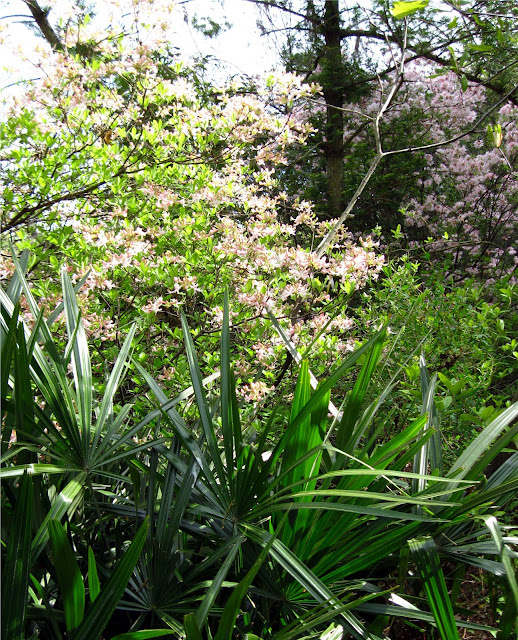 she told me the azaleas, and she was right!

They're in the Coastal Plain section  along the road at the bottom of the Collection, and you can see all these without getting out of your car. I got out though. They're all fragrant and today was cool and windy, not the best weather for smelling. I wanted to get my nose into the flowers.
Posted by ChrisU at 4:17 PM 0 comments

Jasminum fruticans flowered for the first time in China Valley 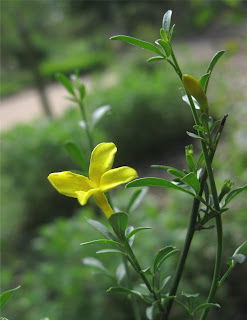 I guess I mean that Stefan's collection from Azerbaijan flowered for the first time. It isn't fragrant but the foliage is nice and according to what I read, the plants become relatively compact evergreens a few feet tall and not quite so wide. They are quite small now but growing. We shall see how large they end up!
Posted by ChrisU at 3:35 PM 0 comments 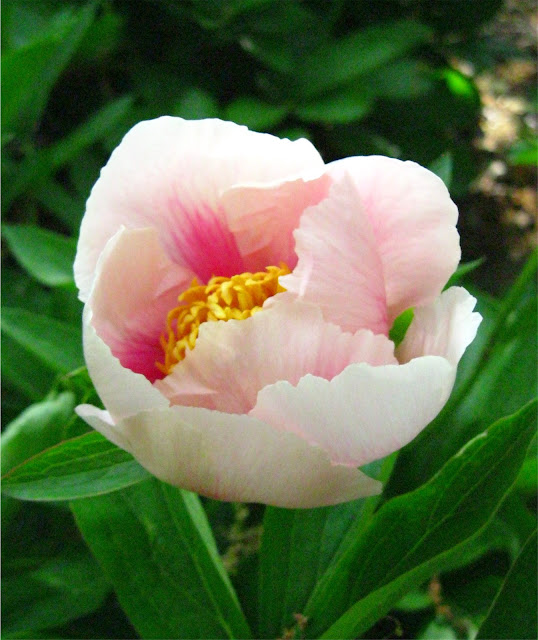 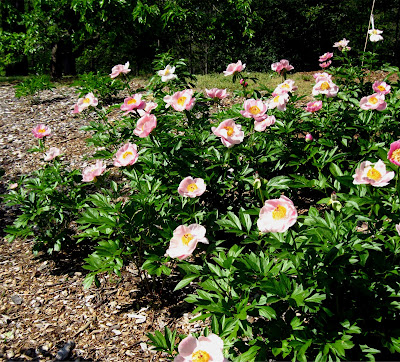 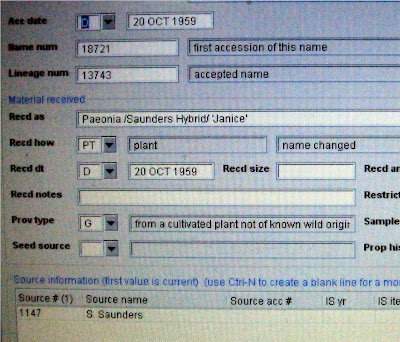 I looked in the records and discovered that we had  received this peony in 1959. Arthur Percy , or AP Saunders, through selection and hybridization, developed a load of peony cultivars: some herbaceous, some tree peonies, and others, hybrids between the two. I have seen references to him as the "father of modern peony breeding". He did produce a lot of wonderful selections. Though he died in 1953, some of the most beautiful peonies in gardens today a Saunders products.  'Janice', certainly one of these, is a cross between Paeonia lactiflora and P. peregrina. Saunders favored peregrina.

I don't know, but I would guess that the S. Saunders listed as a source is his daughter, Silvia, who continued to work with peonies after her father's death and that's pretty cool.
Posted by ChrisU at 3:31 PM 1 comments

Rocky stopped by today to visit in the collection...that was nice

and kind of appropriate because I'd already been thinking about how many people had worked in the Asian Collection, the sum of whose individual contributions combined to make the area what it is. We had a project today and two of the three gardeners assigned (plus Rocky) had previously worked in the collection. I like our projects; we really don't have to tell anyone what to do or how to do it because they've already been there.

Every day I try to arrive at the Arboretum 15 minutes early so I can drive through the Asian Collections. Every day I'm proud of the gardens and not just for the relatively minor part I've played in shaping them.

I suppose in some sense all publicly gardened areas, including public gardens, are the product of all their gardeners, designers, patrons, volunteers, contributing plant collectors....but I think it may be more true of the Asian Collections than most. I'm thinking there are at least 50 people who have made material contributions to the shaping of the garden. Some people have designed large parts of the collections; Barry Yinger and Lawrence Lee. Many others have done minor redesigns of smaller spaces.Still others have created small vignettes here and there throughout the space. Even more have made "adjustments". Adjustments can mean moving a plant from a place where it doesn't work to a site where it can sparkle. Or it can mean living with a space so long that one day an epiphany happens and you know the perfect plant for a particular spot. Or dividing a single plant over and over to create a spectacular drift, actually it's the realization that the drift would be spectacular and the subsequent creation of it. Bradley Evans and Stefan Lura acquired, over their relatively short tenures, an array of beautiful and or, curious and uncommon plants. We've been propagating those plants and using them ever since. Both also did useful relocations of number of plants. Most of the gardeners and some of the curators can show you plants they planted in the Asian Collections.

You might think that all of these different tastes would have resulted in a garden without a direction, a miscellaneous collection. That hasn't happened for some reason. Mistakes have been made, most corrected, but for the most part we have all bough into the existing design and worked from there.