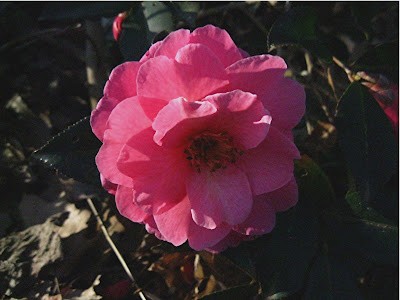 Warm weather continues though a bit cooler than the beginning of the week. Because the sun was out, 51F felt pretty good. In the morning I did inventory and mapped plants on Korean Hill with Joe Menes. We're combining inventory with mapping because many of the plants on Korean Hill haven't been mapped with our newest, accurate to  21", GPS. The unit was, for the most part cooperative (satellites will be satellites) so we made good progress. Joe did most of the work. In the afternoon, the two of us along with Carole, walked the collection to review points along a walking tour, that will also be a virtual tour, or vice versa. We decided that the collection is beautiful and that there is no simple route to see everything. I think we're going in the right direction though.

This camellia is flowering outside the entrance to the ladies room at the Asian Collections parking lot. It's only one of many spring flowering varieties out now. This one is actually suggested for USDA Zone 8 because it wants to flower in the middle of winter. According to our new Zone map we're in 7b. This winter it's more like 8b. 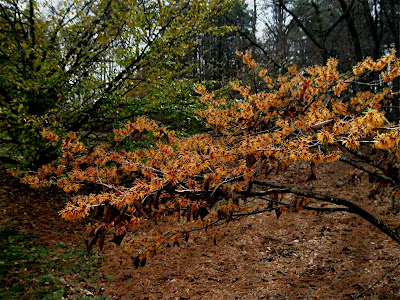 I've been so excited about the unusual flowers that our extraordinarily warm winter is bringing out that I forgot all about the plants that would be flowering now anyway. They are doing their regular thing except to a degree not often encountered. This witch-hazel kept catching my eye as I moved loads of CR-6 to the collection.

If you're interested in gardens in winter and you're within striking distance of the Arboretum, this weekend would be a good time to spend a couple of hours here. There are masses of Prunus mume and Hamamerlis flowering, plenty of camellias, hellebores galore, plus a miscellany of odds and ends.  This is as good as it gets in early February. 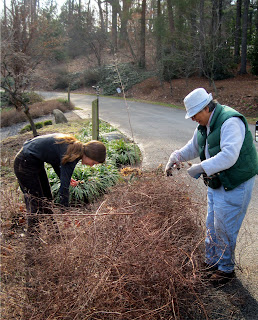 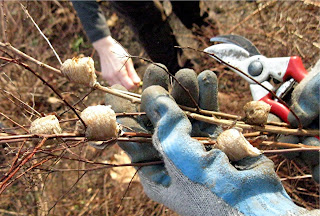 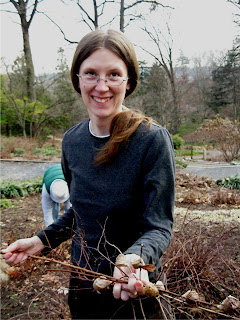 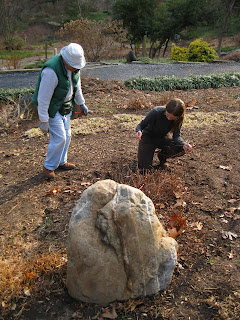 Eugenia and Angela came out in spite of the rain that fell until 11:50 am. Intrepid. They did a variety of things including much weeding, some cutbacks, and a bit of pruning which included a handful of small to medium spireas. As we got ready to load the debris (top picture) we noticed a mantis egg case, then another, and on and on. We decided not to sent them to the chipper so we went through and cut them all out. We found at least 20. The bottom picture is Eugenia and Angela puting them back into the bed.
Posted by ChrisU at 3:46 PM 0 comments 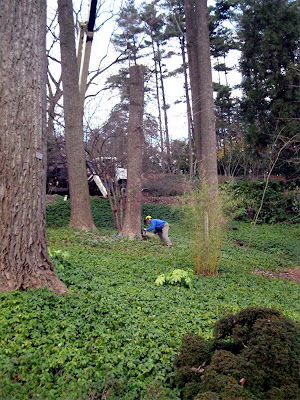 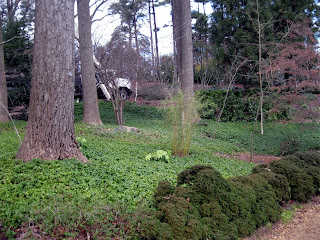 That's two from a fairly small space that contained seven  two years ago. Their wood isn't particularly strong so they're subject to storm damage; both of the trees we removed were damaged.

Liriodendron tulipifera has always been a useful tree for Washingtonians.  because their canopy retreats far up into the air, the resultant high shade is a great place for our "classic" DC gardens: azaleas, flowering dogwoods, hostas, bluegrass, and maybe yews or cherry laurels at the foundation.

High shade would be nice in this location but with seven trees in such close proximity the "high shade" became deep shade. Nothing much happened underneath. The thick groundcover is pachysandra and those are (old) dwarf boxwoods in the foreground. The site has always been a "calming" space. If the profusion and variety of the rest of the garden became overwhelming, this green view was always there. Your eyes could rest on the ground cover and the vertical trunks and your mind could stop trying to process particulars. Whether by design or happenstance this space is on the outside of a curve in the trail so, walking from either direction, one's gaze is naturally directed towards it. We added the Fargesia robusta (clumping bamboo) and the Fatsia japonica a few years back. They both seemed to fit the serene mood of the spot.

Something has changed. This last removal opened up the back of a mature Cornelian Cherry, Cornus mas (top center). With all the extra light from removing two canopies, it'll fill out nicely and in early spring or late winter the bright yellow blooms will be visible from the trail I'm standing on. That'll be pretty colorful of a calm green glen. Hmmmm. Those flowers will only be around for a few weeks so maybe not so much has changed. But no. There's more light and a more open look. We're going to have to reassess the space.

Reassessing, or reacting to change outside our control. is a part of gardening that I didn't think about much for my first twenty years as a gardener. Honestly, these sort of disruptions annoyed me; they were monkey wrenches in my well laid plans. Now, after forty-odd years in various gardens, I almost look forward to them, maybe not change for change's sake, but opportunity is an exciting thing. So I'm parking this space and it's issues in my mind and going on with the other tasks and challenges that this gardening year will present. If I'm lucky when I return to the subject maybe this summer, my mind will have some suggestions, or maybe an inspiration.
Posted by ChrisU at 4:34 PM 2 comments

4:46 Eastern Standard Time at the Capitol Columns and the sun is still up 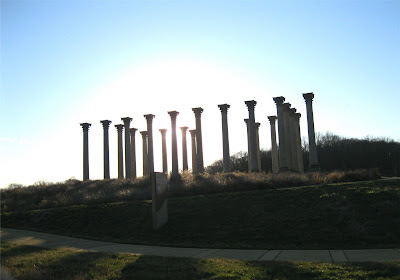 You can't exactly see it because I positioned myself so that it was behind a Capitol Column capital. Oops. It's a good thing that the sun's moving higher in the sky and staying up longer. I'm not so sure about the 65F high temperature we had today, the last day of January. We're all enjoying the warmth with some trepidation....waiting to see whether winter will arrive and wreak havoc on all the plants softened by this unusual warmth, or whether the whole year will be warmer. Gardeners are glass-half-empty kind of people.

From the second to the thirteenth of December, the sun set at 4:46 EST. Since then it has pushed back incrementally so that today it set at 5:28. That's real progress towards longer days. Unfortunately at the other end of the day (sunrise) we haven't seen that same energy and initiative. The worst, I mean the latest, sunrise was 7:27 EST; the sun rose at the time from December 31 last year to January 11 this year. Wow. Over the past almost three weeks we've gained all of 11 minutes. Sheesh.

Still it's nice to not have to rush out at 4:30 to get home before dark. And, starting tomorrow, we gain 2 full minutes of daylight every day.

Styphnolobium japonicum 'Gold Standard' at the US National Arboretum 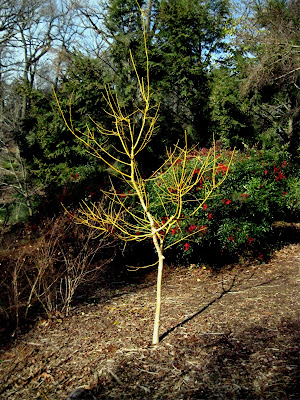 If you like outrageously bright colors, and we know I do,you're going to want to grow this crazy yellow twigged tree. We got ours from Don Shadow who brought it back from Japan where it's commoner in commerce than it is here. It's only a matter of time though. I can imagine them flying out of a big box store by the dozens.

We planted ours two years ago. I'm thinking it's more than  doubled in size since then. It's a selected form of The Scholar Tree, which used to be Sophora japonica. now Styphnolobium japonicum. They're related to our native Black Locust, Robinia pseudoacacia, and grow at nearly the same rate. The color viridesces with spring so the tree is green most of the year. When cold weather returns the color comes with it so that now, when the winter sun hits it from a low angle, it glows.
Posted by ChrisU at 3:29 PM 1 comments

Phalaenopsis from Florida 3 for $12 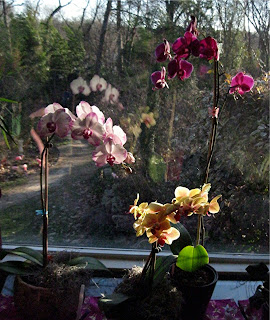 When we visit the Florida garden, we buy them in place of cut flowers and, when we drive, they come back to Adelphi. These came back, like I did, January 9. When I got home this afternoon they were enjoying sun from the southwest.
Posted by ChrisU at 4:48 PM 1 comments