It's hard to leave one garden, even to go to another one. As soon as Karen Upton and Sons return from their most prestigious maintenance job, across the street from Washington's "design house" of the year, we'll load up the dog and head south.

I walked the garden this morning; it's lovely when the sunlight cuts through from down the street and highlights this and that. The huge Jasminum x stephenense? on the corner of the deck is just starting to flower. The soft pink blooms have a spicy scent reminiscent of J. polyanthum. It's a rowdy plant that really only flowers once a year. Every year I consider removing it but never do. Last fall I planted a Bignonia capreolate at its base with the intention of removing the Jasmine and allowing the Crossvine to take over the corner. I probably won't do it: too soft-hearted. I'm thinking the Crossvine could be diverted so that it could cover the back rail west of the corner. Live and let live.

Canna 'Bengal Tiger' seems to have let me down this year; it's usually hardy but, excepting the plant at the Library, I don't see any signs. Canna 'Australia' did resprout. I never thought it would and saved a whole bagful of roots. Actually the survivor is growing so quickly that it's just about at the same place as the replanted dug roots. Usually the downside to "hardy" tropical here in USDA Zone 7 is the fact that they take so long to resprout that while you're waiting for them there are big holes in the garden. The Colocasia in the GCA Circle (at the Arboretum) are beginning to resprout but they're a month behind the plants that Brad gave us two weeks ago. So I'm going to watch C. 'Australia' and see if there's consistency to its hardiness. 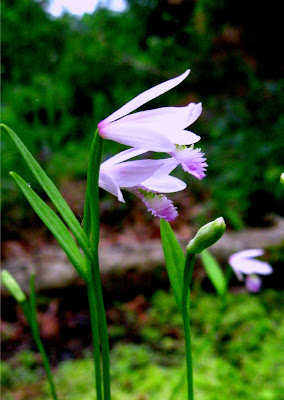 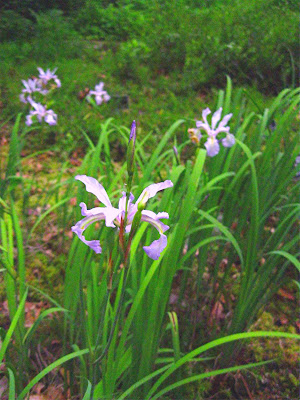 I walked down the path to see what the tree contractors were removing. It turned out to be an extremely diseased Tulip Poplar. I stopped at the bog on the way out and found these lovely petite wildflowers. There'll be more to come later in the year: more orchids, cranberries, crowberry, leatherleaf. etc.
Posted by ChrisU at 3:18 PM 0 comments 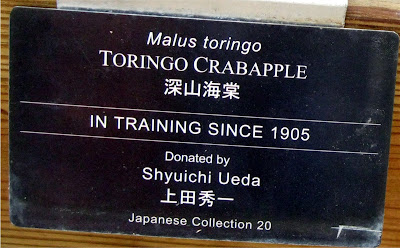 The trees are amazing and the shade plantings under the Cryptomerias have never looked so good even if the ghost of a former gardener is turning over in her grave at the coarseness of the mulch. Hey, we use what we have.....and she's not dead anyway so she can't turn over in her grave.
Posted by ChrisU at 3:10 PM 2 comments

I took my banana for a ride this morning....then I gave it away

I thought if it was going to live immobile for the rest of its life, as plants do, it might be nice to see some sights before settling down. The whole thing came about because the Musa 'Basjoo' that Amanda planted in China Valley last year inexplicably....well, didn't survive the winter. Now I don't understand that; the winter wasn't anywhere near cold enough to have killed the plant. It died somehow though and apparently another one died in a Bonsai planting. Oh well. Anyway I dug a pup from our home garden and brought it in. I expect it'll survive. I've planted them at all seasons and never lost a plant. I remember one fall a few years back when Home Depot sold 1 gallon pots for a couple dollars apiece. We bought a good number and distributed them. Some were planted as late as November and all of them survived.
Posted by ChrisU at 2:59 PM 0 comments 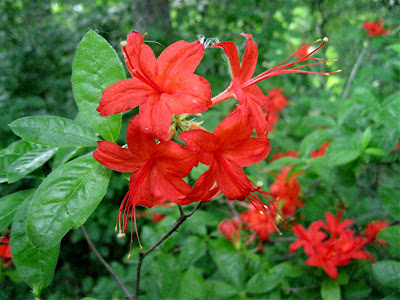 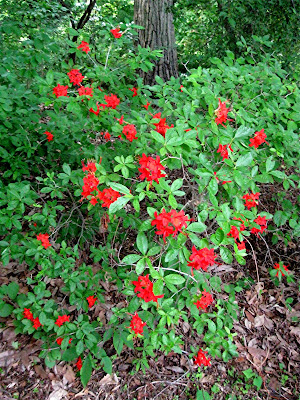 The early flowering native azaleas are pretty much done but there are a few later flowering types still to go; this crazy orange flowered species from the Southern Appalachians has been instrumental in the production of many hybrid cultivars. It's almost too much saturation even for me but hey, color is good!
Posted by ChrisU at 2:59 PM 0 comments

Pat Lynch spotted these eggs working on the Planting Project on the East Terrace. Lacewings are beneficial insects in the family Chrysopidae. Many of them eat aphids; indeed they often lay these oool stalked eggs near aphid infestations. 'I ought to have included something for scale beyond the coarse weave of the backgrund fabric. I'd guess the eggs were about 3-4mm apart.
Posted by ChrisU at 2:41 PM 0 comments 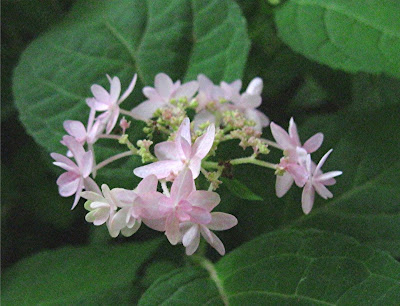 But it's beautiful and small; the plant isn't more than a foot or so high. Amanda propagated this plant last year and I moved a small one above the wall at the GCA Circle. It's growing very slowly!
Posted by ChrisU at 2:36 PM 0 comments

Weekend watering....I had a good time and saw the Herb Garden 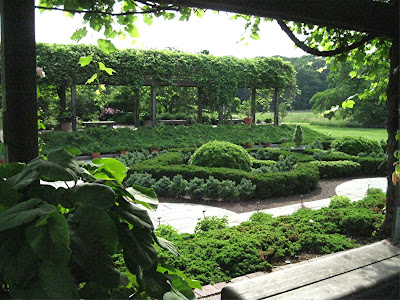 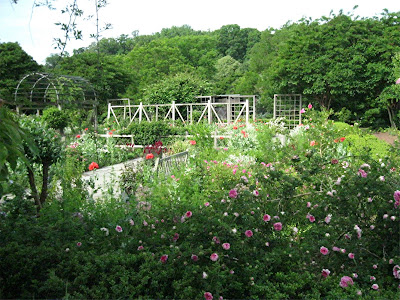 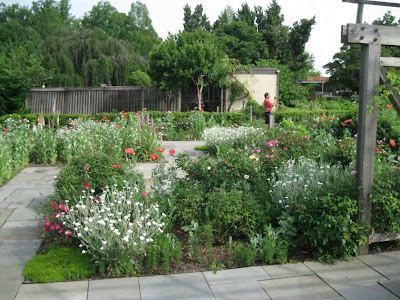 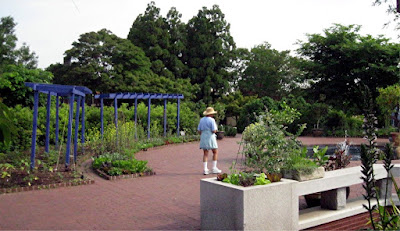 I watered last Sunday and barely had to lift a hose; we were still getting rain every other day and the temperatures were hanging in the 70's F. This week I got paybacks. The rain stopped Thursday so the moisture lasted through yesterday afternoon; then everything dried out. It was fun though. As usual, the Herb Garden was incredible. The new roses are coming into their own and so long as they can survive the competition of their "companion plantings" they'll be okay. The larkspur seems to have ebbed a bit but any vacancies have been filled by white Lychnis (Silene?) coronaria or the ubiquitous orange poppies. I'm always blown away by this garden that refuses to admit that it's operating with less than ideal staffing numbers. It looks like there are 3 or 4 full time skilled gardeners keeping it up.

I had a little bonus fun thanks to the vending machine that dispenses food for the Koi being out of order. Normally the Koi get their food via visitors that purchase it from the machine. Because the machine was down I had to feed the fish. I took the pre-measured bucket of food to the pool about 10:30 and, no surprise, a dozen children were drawn in by the fish swarming around the food. I only had to do two handfuls and before the recruits swarmed the bucket. A good time was had by all and the fish were amply fed. When their consumption slowed, we stopped feeding them. I came back again a couple hours later and, using the same ploy, disposed of most of the rest of the food.
Posted by ChrisU at 5:46 PM 1 comments