The Morrison Garden in the Azalea Collections at the National Arboretum 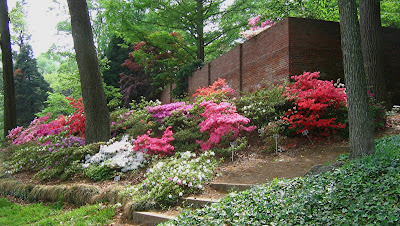 This was always going to be the peak weekend for Azaleas but the 4 90F degree days earlier this week guaranteed that anything close to being open would open. I ran through the collection this afternoon and it is beyond my powers of hyperbole to describe it. I don't post this collection a lot because you have to actually get out of your vehicle and walk into it and I rarely have much time in the mornings and well....I don't know about the afternoons, but it is definitely worth a visit this weekend. Don't be concerned about forecasted cloudy weather; the colors are actually a bit nicer when it's overcast (notice how my photographic skills fail to handle them in the sun!) If you miss this weekend there will still be plenty of flowers for the next few weeks. The Rhododendrons largely follow the Azaleas and they've just started.
Posted by ChrisU at 4:49 PM 0 comments

Daphniphyllum macropodum....When I first saw this plant in the Asian Collections in 1991 I loved it 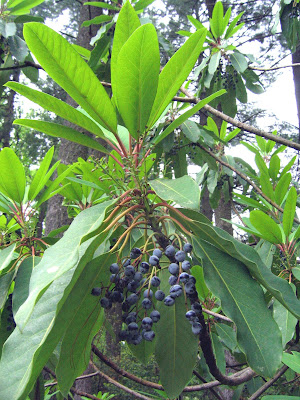 You know what? It's still a good plant. At a quick glance, it looks a lot like a Rhododendron, though the flowers are nowhere near as spectacular. Still, it doesn't have the same issues with fungi and drought that Rhodies do. When I first encountered it I seem to recall that it was considered to be a member of the Euphorbiaceae (it does have milky sap); now it's placed in its own famly, the Daphniphyllaceae. Such is taxonomy.

Anyway, the leaves are evergreen, the fruits are blue-purple, and the petioles are a wonderful red (this trait is seasonal: clearly they are pink now!). If you draw an imaginary horizontal line through the picture, last years leaves and last years fruit will be in the bottom half; above the imaginary line are this year's new leaves and this year's immature fruit.

I wondered 16 years ago and still wonder why this plant hasn't penetrated the retail nursery trade. Hey, it's a shade evergreen that deer don't eat! Of course there is the inherent conservatism of growers but maybe it's also because the hardiness seems uncertain north of USDA Zone 7. The literature suggests zones 7-9 but my own observations make me think it might handle at least a little bit of Zone 6. I have never seen any indication of cold damage and we do have cold winters once in a while. If you are intrigued, it is available from various on-line suppliers.
Posted by ChrisU at 4:23 PM 0 comments 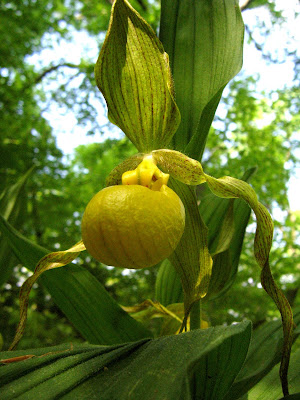 The easiest of the terrestrial Slipper-orchids to grow; 25 years ago I was thrilled to discover that the park four blocks away from our new house had a small colony of these orchids. They're still there in sandy loam growing beneath Mountain Laurel, Kalmia latifolia, 25 feet from a swing set.
Posted by ChrisU at 4:08 PM 0 comments 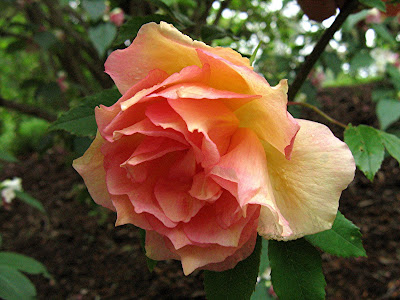 Tomorrow is May Day and there will be a few dozen flowers open on this sprawling heap of a rose. The few that opened today produced enough perfume to detect yards from the plant.

Discovered by Robert Fortune in a garden in China and introduced to Europe in 1845, this rose has been beloved by many generations of gardeners. Richly fragrant, blooming heavily in the spring, and generously endowed with thorns, it has an unfocused random vining habit. Without strict attention it can claim a good amount of territory, though in the end you might consider it land well spent.

Though only considered hardy to USDA Zone 8, our plants seem not to have been negatively affected by a winter where temperatures dipped occasionally to the bottom of the Zone 7 range. The ground never did freeze either deeply or for an extended period of time and that may be a determining factor. On our plants which were completely exposed, there was negligible dieback.
Posted by ChrisU at 4:30 PM 0 comments 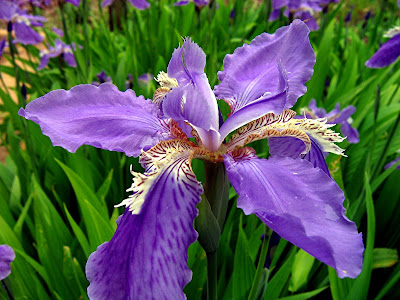 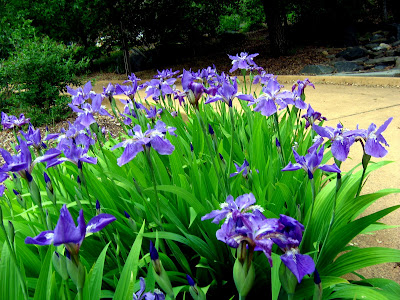 "Roof Iris" because it was traditionally grown on thatched roofs, "Crested Iris"....well, look at the picture! When we "recovered" the old Camellia area in 1991 we transplanted large number of these plants into the newly cleared area as groundcover. They are still there today still covering ground.

This planting is in China Valley growing full sun. They flower a bit more heavily than their siblings in the Woodland and, it seems to me, with better color, though that may be a subjective judgment. At any rate they are lovely.

Asarum delavayi, Chinese Giant wild Ginger....when you push the large glossy leaves aside, these stange spotted 2" flowers are clustered at the base 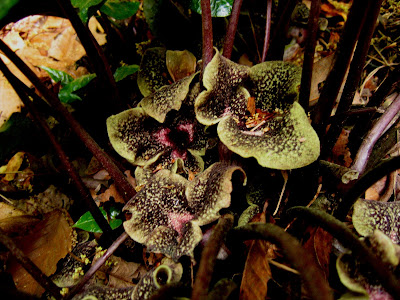 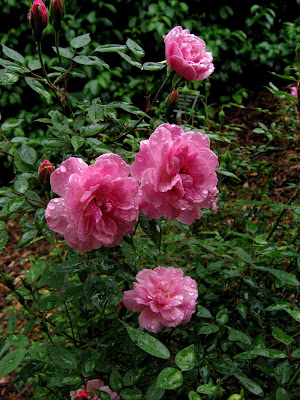 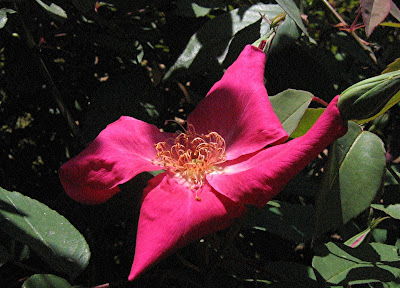 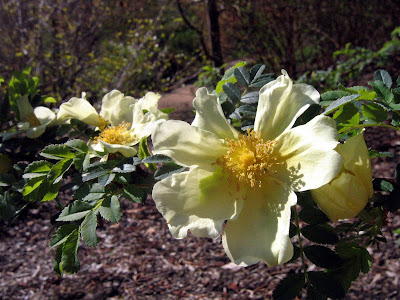 Each of these roses has something special going for it: R. chinensis minima is a small rose, ours is about 2' tall, with clean foliage and nicely fragrant flowers. 'Bengal Fire' is a thornless rose, honestly, completely thornless; you could dive naked into it, it's quite sizeable, and whatever other injuries you sustained, you wouldn't be scratched by a thorn! Its flowers have the beauty of simplicity and it is purportedly more resistant to fungi than the Knockout family. Wow. Rosa primula, the earliest rose in bloom, emits a light pleasant fragrance from both its flowers and its foliage.
Posted by ChrisU at 5:00 PM 0 comments

After a week or so you start to get blase about the whole Tree Peony thing, then you see something like this... 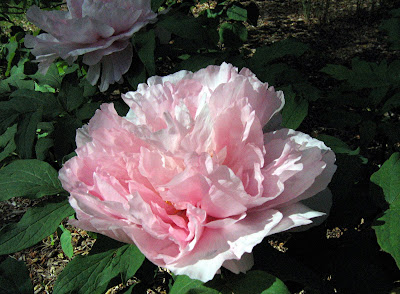 And the fragrance is better than the flower! Well, its wonderful anyway.
Posted by ChrisU at 3:01 PM 0 comments 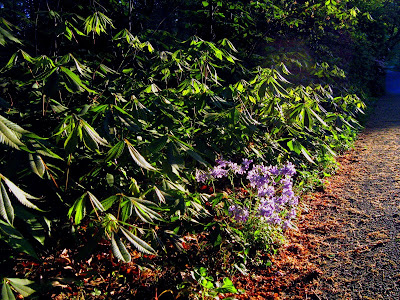 The developing leaves on the Aesculus have a peculiar droop and sheen that interact curiously with the morning sun. As the month passes I have to come in earlier and earlier to catch the sun low in the sky, but the light is wonderful so I'm going to keep on trying!
Posted by ChrisU at 2:57 PM 0 comments 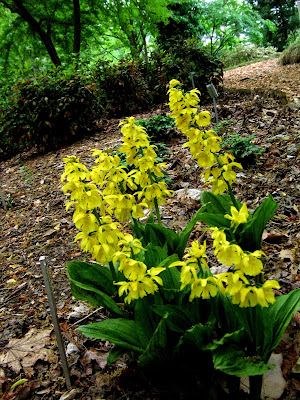 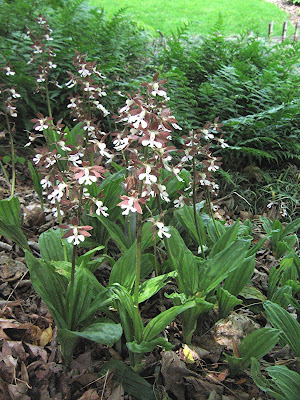 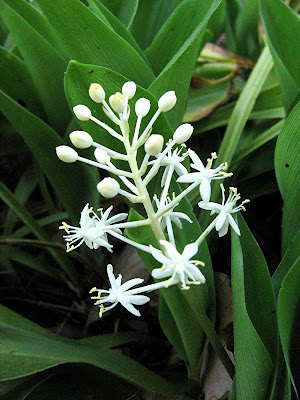 Its difficult to compete with Rhododendrons, Azaleas, and the other strikingly spectacular shrubs and trees flowering now. but.....if you want to take a break and look down there are interesting plants on the ground. Calanthes are in the Orchidaceae, the Orchid Family, and Speirantha is a member of the Liliaceae, the Lily Family.
Posted by ChrisU at 2:41 PM 0 comments 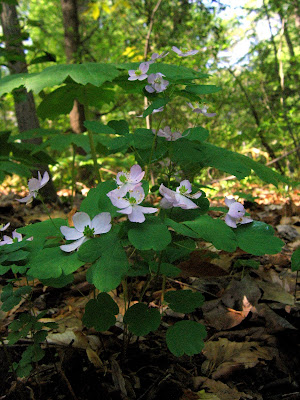 This plant was shipped in last May from the wild part of the Lura garden in Minnesota. If the photograph had been better, the pink color would be more apparent. It's a beautiful dainty little plant growing alongside the main path above the stream ~50' downstream from the stairs to the new platform.
Posted by ChrisU at 5:39 PM 0 comments 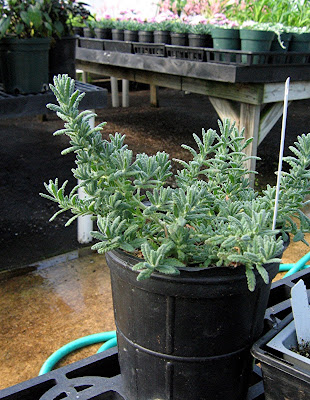 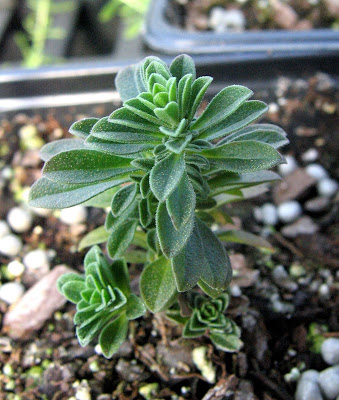 They're both in the mint family so they both have fragrance. Teucrium polium, Felty Germander, is an evergreen subshrub, you know how I feel about them, as is Ssatureja macrantha, a kind of Savory. And both of them likely to do well in this area. Wow.
Posted by ChrisU at 5:23 PM 0 comments

Skeletal hand thrust from the earth atop emerging culm 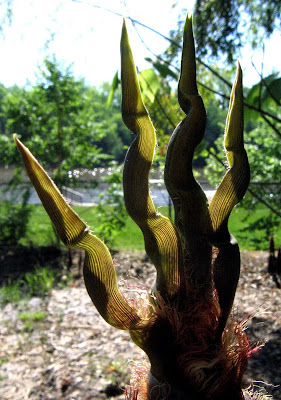 This is a big bamboo! It forms a stand of considerable spread on the SE corner of the Asian Collections at the bottom of China Valley. Some of the canes approach 5" in diameter. I have a more usual (smaller) form in my own garden; its first thrusts are not so interesting. Bamboo grows fast enough without the benefit of these 90+ degree days following a cool wet spring. I will check this particular culm tomorrow and see what progress it has made.

We have had three consecutive days with the high temperature in the mid 90sF. These are following a cool spring with more than adequate moisture. Plants have exploded. My Northern Red Oak has gone from flowers only (no doubt dispatching quantities of pollen) to 5" leaves in 3 days. Views have closed up all around as the forest trees hastily refoliate. If you stand still outside you will be coated in the greenish golden powder of pollen; Leaving the Arboretum this evening, the cars in the parking lot were all heavily pollinated.

I sneeze as I write this post. For much of my life I was unaffected by pollen. I suspect that continual exposure produces hypersensitization; or I'm just weakening as I age! I think the former.
Posted by ChrisU at 1:56 PM 0 comments

Tree Peonies are out this week at the USNA 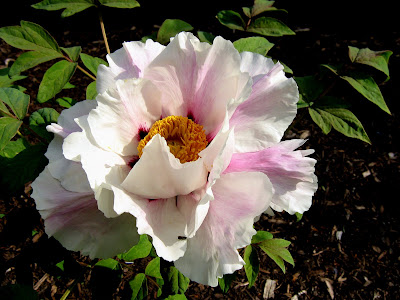 There is a collection of Tree Peonies in the Boxwood Area but there are others spotted around the Arboretum. The Asian Collection has many varieties. This plant is in the Herb Garden.
Posted by ChrisU at 10:52 AM 0 comments

Beltsville Library Garden wakes up with Dogwoods and bulbs 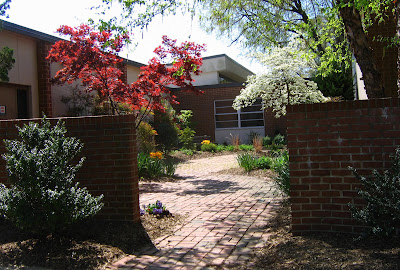 Rhododendron vaseyi and R. austrinum: the Native Azaleas have begun to flower in Fern Valley 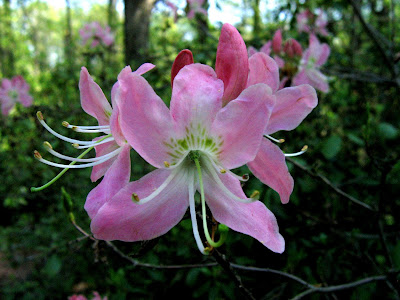 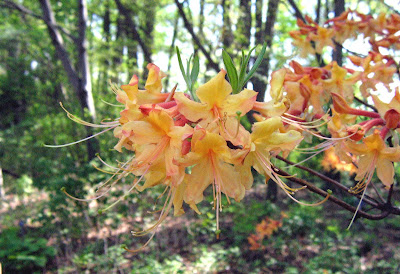 Pinxterbloom has been flowering for over a week; it's another pink one. All the spring-flowering natives are fragrant too!
Posted by ChrisU at 9:51 AM 0 comments