There was Art happening in the Asian Collections yesterday 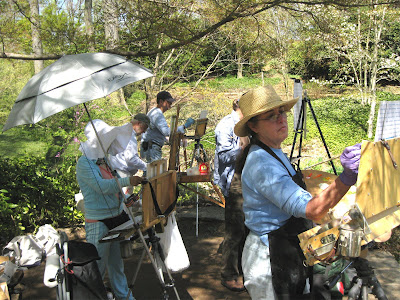 I'd like to see the paintings; I'm pretty sure I won't but they picked a wonderful site.
Posted by ChrisU at 10:23 AM 0 comments

Claytonia virginica, Spring Beauty: there are thousands of them in Fern Valley 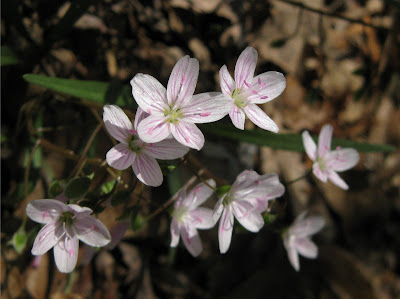 Spring Beauties, Toothwort, Virginia Bluebells, Trout Lilies, Wood Poppies; the floral progression is picking up steam. The native Azaleas will begin to open any day and the Paw Paw buds are swelling. Fiddle-heads are swelling and the Barred Owls must be near hatched. I've gotta get out there more often.
Posted by ChrisU at 4:15 AM 0 comments 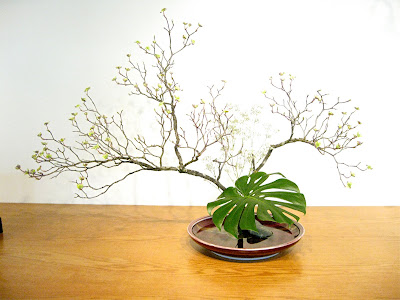 Though I make it a point to visit the exhibition at least once a year, I've never attended the opening ceremony because, well....,it's April and there's never time enough to do half of the things that absolutely need to be done in the garden. This year is worse than most what with the destruction wrought by our back-to-back blizzards and this sudden onset of early summer temperatures. So I figured, what the heck, it's like waiting until you have enough money to have children....if we did that there'd be a lot fewer people. If I waited till the garden was caught up in April.... So I did go and heard a few delightfully short, witty, and engaging remarks {aside: I know this sounds ridiculous, but, against all odds, I actually enjoyed listening to this presentation and didn't notice myself tapping my foot at all} from various dignitaries including our interim director Dr. Ramon Jordan and Minister HideoFukushima from the Japanese Embassy. 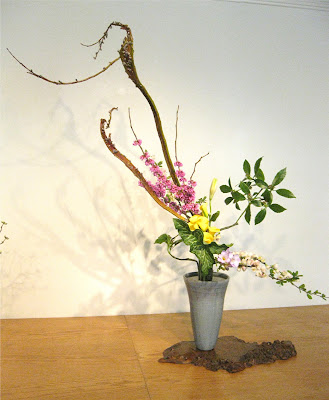 I'm not a student of Ikebana, but I have always enjoyed the arrangements. I see them at least once a year here and at the Philadelphia Flower Show and generally come away with my aesthetic sensibilities reawakened and revivified, upon going out into my regular world I see things differently for a while. An experience akin to going to an art exhibition. There are different "schools" each with slightly different rules and styles but I'm probably overstepping my knowledge base here! Anyway I believe I heard there are 8 schools represented in this exhibition. I tend to like the more minimalistic arrangements, though there weren't any that I didn't like. 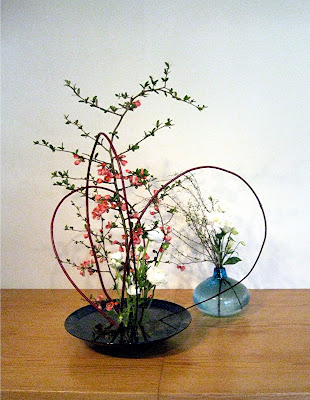 There were a couple, like this one that I almost felt I had to move to appreciate; it was different but beautiful as I passed from left to right. Of course I design gardens and while certain viewpoints are always important and addressed, it would be nice to think that a design could work, no matter what spot it was viewed from. I have yet to achieve that "holographic perfection" but it gives me something to shoot for! 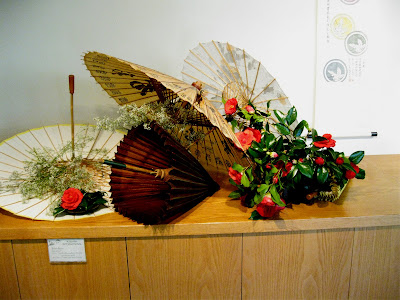 There were a couple very large arrangements that stimulated quite a bit of discussion. The exhibition continues for another 3 weeks or so, with arrangements changed, I think, weekly. Even in the midst of a Washington spring, which is a wonderful thing, it's worth a trip.
Posted by ChrisU at 3:27 AM 0 comments 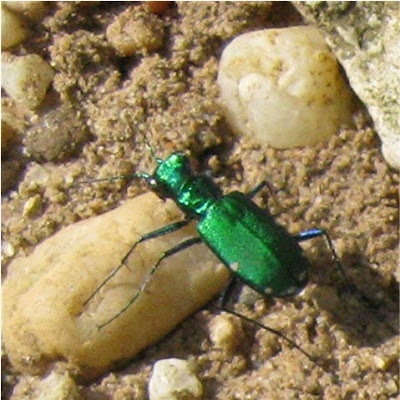 It seems to me I usually see these beetles later in the year, often in the heat of summer....and normally they fly away if you get within 10 feet of them.
Posted by ChrisU at 4:04 PM 1 comments

This is not a tasty cheese and egg dish, it's what happens when the sap oozing from a cut stump ferments in 80+ degree temperatures 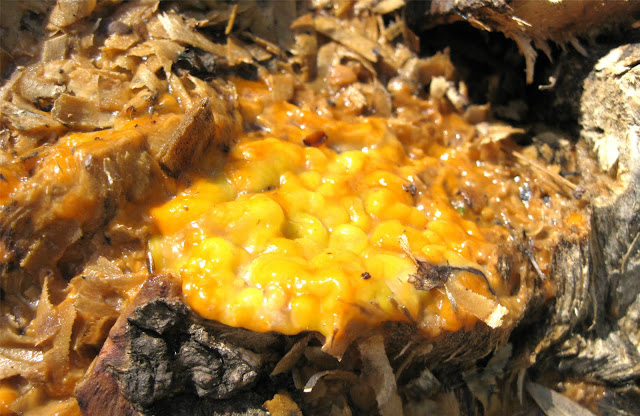 We had droves of visitors today; two of them spotted this festering ooze on Korean Hill where once a Styrax japonica had stood. They noticed it from the road possibly with their noses; it smelled mighty bad.

Visitors and flowers were everywhere and the pollen is so heavy you could almost taste it.  A few regulars, including Mary Pat, mentioned that it seemed like "visitorship" (my word, not Mary Pat's) has been up significantly  this spring. I've had that same feeling myself but it could just be the wonderful weather following our winter from hell. I had the same feeling much of last year though. Im taking a good read on this and think two things: one, that we, staff and volunteers, have made, over the last ~3 years, significant net improvements to the appearance of the Arboretum; and two, that it is having an effect on local visitors. Two trips a year, or three, or four, or five instead of none or one or two. It's a more interesting place (see Brad's plantings around the Administration Building, the new improved Herb Garden, Fern Valley, Capitol Columns, and on and on) and a much better maintained place, see the New York Avenue fence line,many of the Research Nurseries, the Ellipse, the  R Street gate and adjoining fenceling, the Friendship Garden, the Flowering Tree Collection, the peripheral areas around Holly Magnolia, areas around the Asian Toolshed..... I could go on, the edges of the Beech Woods, the Prunus triangle, Hickey Hill Overlook, Mt. Hamilton Road, the backside of Fern Valley, the Grove of State Trees. All these areas look significantly better than they did five years ago.
Posted by ChrisU at 3:37 PM 0 comments 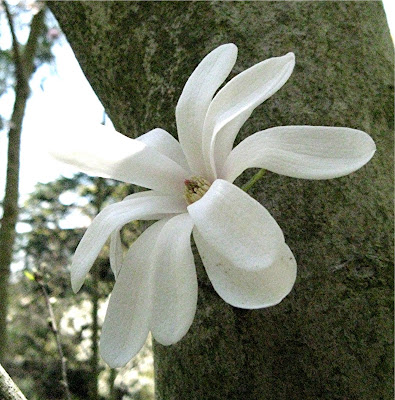 It's not unusual to see the odd flower or two on the trunk of deciduous Magnolias, but this one had over a dozen. It's sort of a nice effect.
Posted by ChrisU at 3:44 PM 0 comments

We (the Asian Collections) got a new volunteer last week, Tatton Blackner: I gave him the most difficult, physically demanding job we had 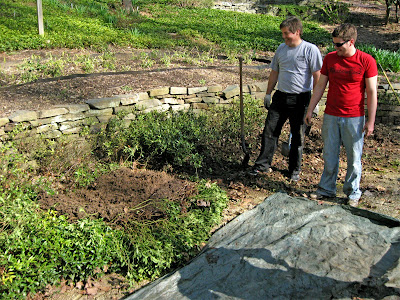 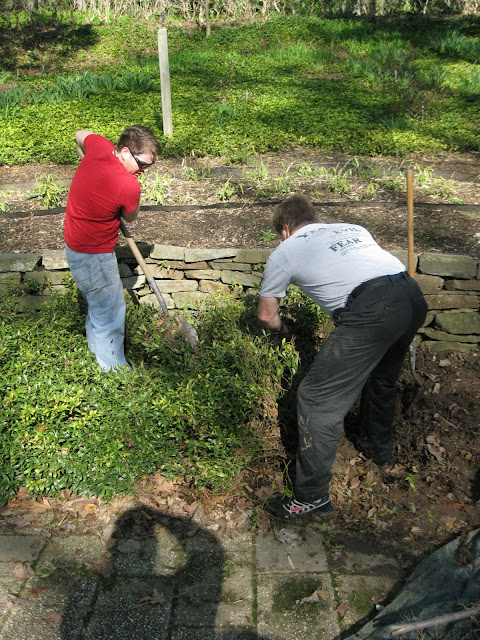 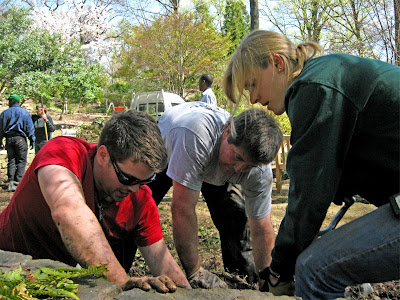 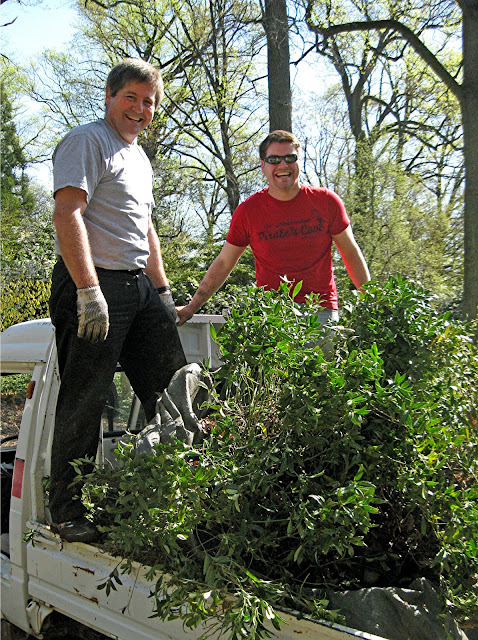 Tatton came back this week to finish the job that I selfishly saved for him, and brought his parents, Rod and Diana to help.  They were in town from Paso Robles, California innocently visiting. Wow.They may not make that mistake again!

We're redoing some of the area surrounding the Garden Club of America Circle and that involves a few removals. A semicircular bed of Sarcococca lay between the paved circle and a low terracing dry stone wall above it. Sarcococca is a perfect plant for the site; it's a low evergreen with pleasantly fragrant flowers. The only problem is that one side of the circle is much wetter than the other and Sarcococca doesn't like that much moisture. The planting was beautiful on the south end, but less happy the farther north you went, finally becoming embarassingly patchy for its last 20 feet.We decided it had to go. Between a thick root system and the heavy mud it was growing in,removing it was not easy.

In conquering the Sarcococca,they followed the steps outlined in the pictures. First they analyzed the situation, then undercut, then pulled and rolled, then loaded it, finally standing triumphant over the vanquished groundcover. We didn't compost everything; we used portions of the healthy area to patch another Sarcococca bed.
Posted by ChrisU at 3:32 PM 1 comments

I feel bad not knowing who this is working in the pool, but, hey!, look at that hat and those gloves and the long sleeves and boots??? 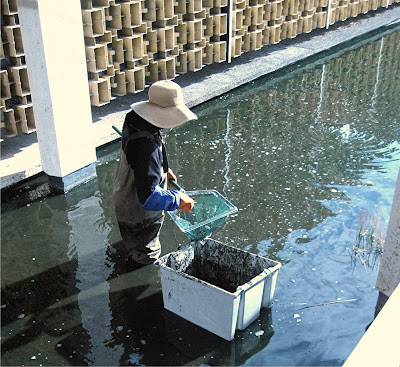 I guess I could have asked, but I was in a hurry. I do know it's one of Brad's dedicated volunteers skimming junk. I only get glimpses of what goes on behind the scenes to keep the pool beautiful, the fish healthy, and the whole system running smoothly. From those snippets, I know the tolerances are small, it requires constant attentton and tweakng, to avoid that natural  tendency towards increasing entropy that can result in disaster. Still, we don't have major disasters and the pool is unfailingly beautiful.

I'm looking forward to a Koi round-up later this month. Sort of.
Posted by ChrisU at 3:54 PM 0 comments 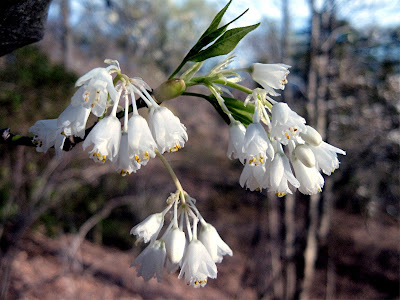 There is a superabundance of flowering trees and shrubs displaying their wares  now, but this one can surely hold it's own!
Posted by ChrisU at 3:44 PM 0 comments

Epigea repens: I was just minding my own business, poking around in the Fern Valley seed flats and look what I found 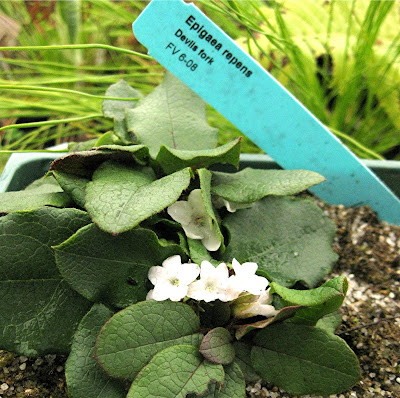 Trailing Arbutus in bloom. Grown from seed collected from wild (non-cultivated) plants. Wow. This is one of just about everyone's favorite native plants; it has a wonderful fragrance. It's also pretty finicky about where it grows. I think of some plants, including this one, as "chameleon plants" not because they can change color, but because, like chameleons, out of every 1,000 that are planted in the garden, or (in the case of chameleons) put into cages, at least 999 are dead in some short period of time. Still....we're experts and I have every faith in Joan's ability to select an excellent site. There is supposed to be a small colony (naturally occurring?) on Mt. Hamilton, but I have never succeeded in locating it.

I do remember collecting this seed with Jeanna and Joan. At some point somebody's going to have to bite the bullet, and get these plants into the ground.....though even I see how there could be a natural disinclination to change something that's working. Still, I believe they germinated a whole seed tray of Epigea last year from the latest collecting  trip. In numbers we may generate the  courage to take the bold step.
Posted by ChrisU at 3:32 PM 1 comments

"Great supperating pustules, Batman, I don't think it's supposed to be doing that!" 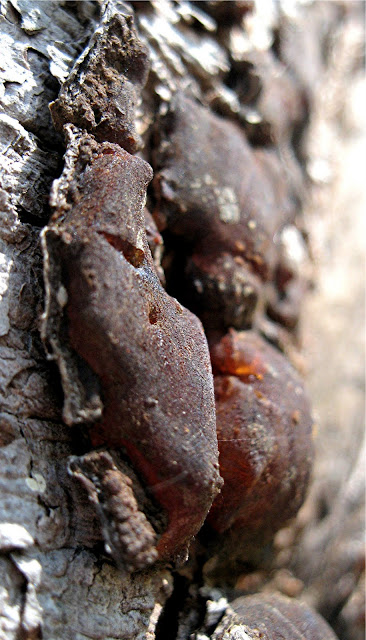 "No Robin, you're amberigenic analysis is correct. And take a look at that 9 foot canker. Here's another Cedar not long for this world." 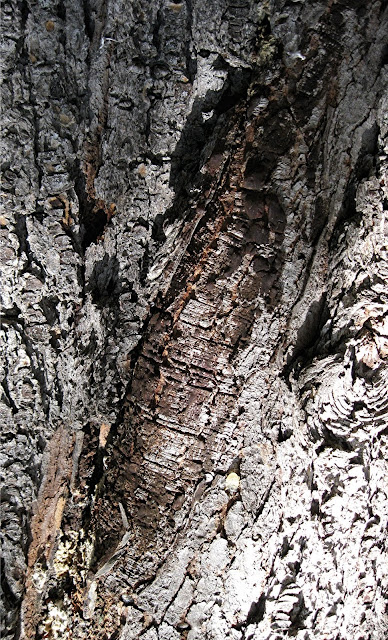 "Batman, do you suppose that there are mosquitoes trapped in that resin have fed from the blood of the Asian Collections staff?"
"I wonder, Robin. Possbly some day in the distant future, if that resin petrifies and becomes amber, scientists could use it as a source for DNA to reassemble this crack team"
"That would be something!"
Posted by ChrisU at 3:11 PM 0 comments 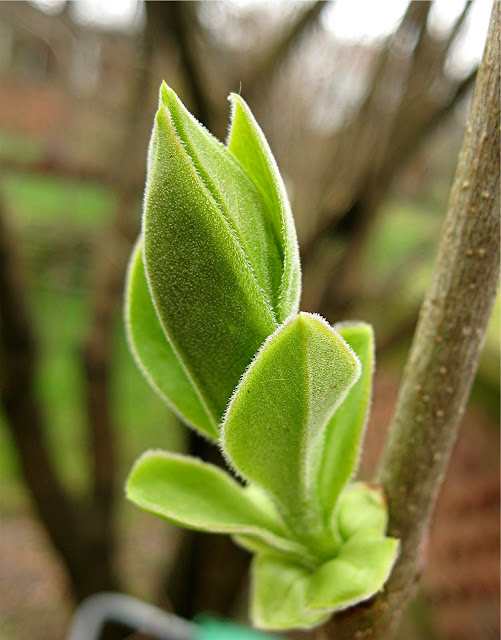 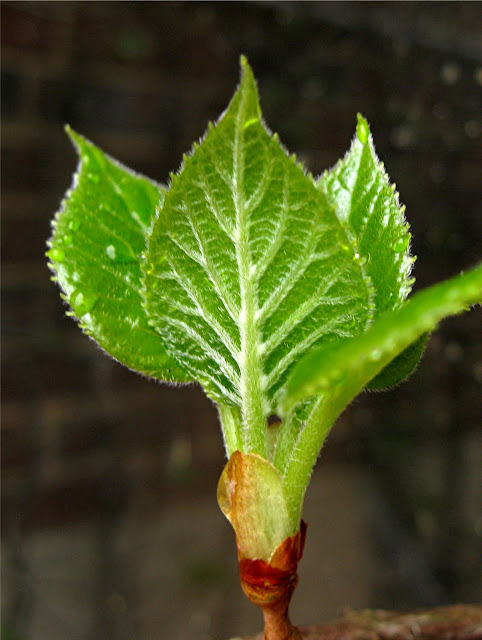 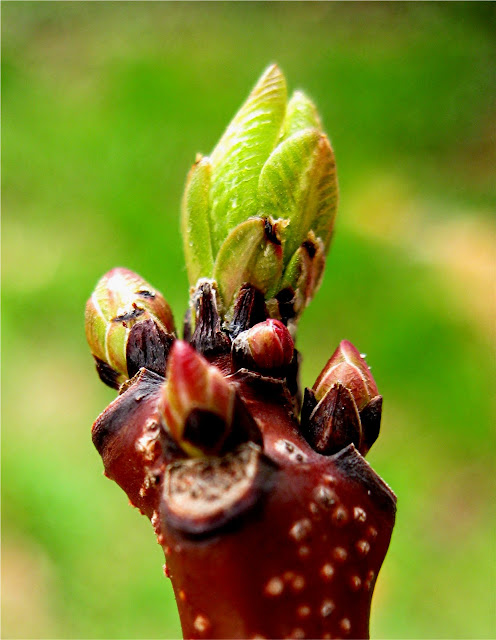 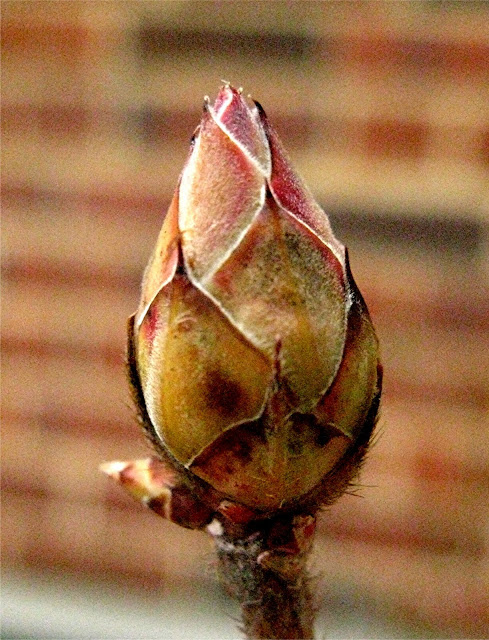 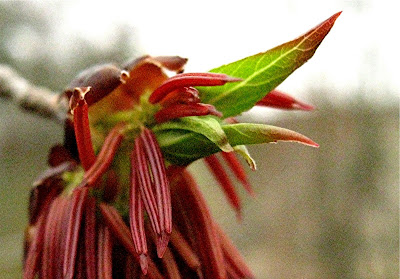