Hemerocallis fulva....an invasive species!!?? This time even I have to vote against the protectors of the environment 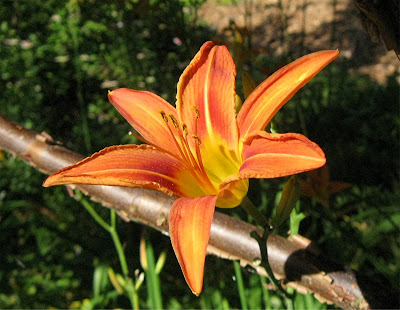 For God's sake, it's a sterile triploid. You do see them by roadsides everywhere, but it's not as though they take over whole fields. Can a plant truly be invasive if it is incapable of reproducing by seed? I suppose Hedera helix, Lonicera Japonica, surely Kudzu can do damage without seeding, but H. fulva??? It's almost endearing in its ability to persist. Hiking the Appalachian Trail, I've encountered it in the middle of the wilderness and known immediately that I had entered what had once been a homesite. It lives forever, marking these places where once families lived. And passed without leaving a trace, save the daylilies. Sometimes Lilacs are there, but they can and do die. Apples last decades, maybe more than a century, eventually succumbing to disease or old age, but Daylilies persist and I admire them for it.

Hemerocallis fulva is a runner. Almost all of the modern cultivars we admire and grow in our gardens are clumpers. And it isn't a great garden plant. The flowers are beautiful, but they don't self-clean and the plants have already begun to look mangy even as the flowers are reaching their peak. Still, there's something about it. One of the gardens that Karen and the boys maintain has a row of these plants right down the middle. It's a wonderful garden, a splendid half-acre exactingly conceived and meticulously maintained in a part of the city where 1/4 acre is a huge garden. And they don't favor reds or yellows, certainly not oranges, yet there's a place for 50 feet of these daylilies.

Francesca Huxley had a row of them beside her driveway in Chevy Chase. I've found room for a clump in my garden though mine pales beside Marions's. The plant in the picture is part of a colony that lives more or less under the Acer griseum above the GCA circle where the path intersects the road. If you look at the picture you will se a small branch of the maple with its distinctive exfoliating red bark. We just killed  back a large part of this colony, but decided to leave a small clump and I think we did the right thing.
Posted by ChrisU at 2:38 PM 1 comments

I know the plant is Apocynum cannabinum, I think it's a Cabbage butterfly 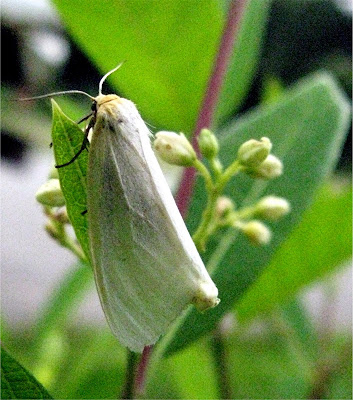 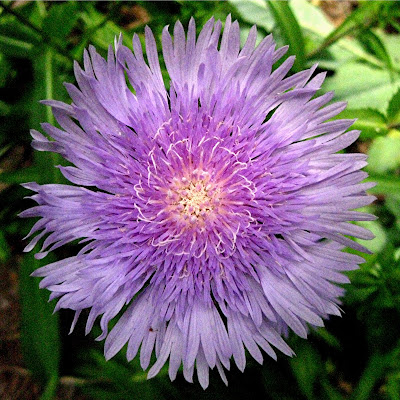 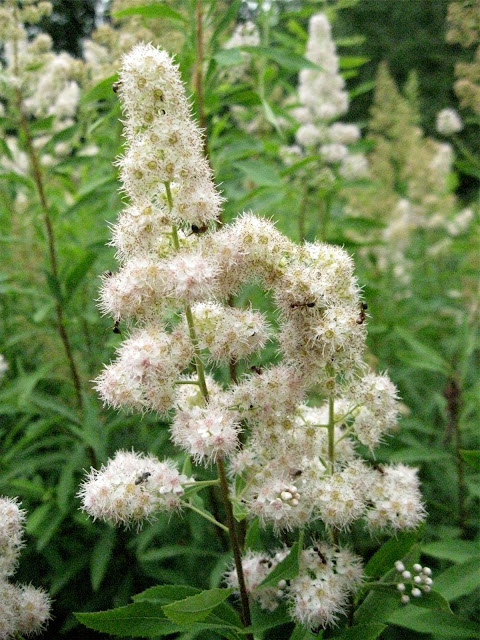 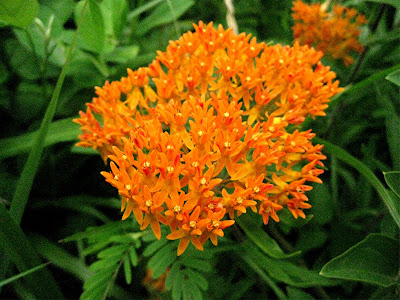 The meadow is just coming alive and the Butterfly weed is everywhere.
Posted by ChrisU at 3:33 PM 0 comments

Allbizia julibrissin 'Summer Chocolate' and the species....we get a lot of questions about these plants 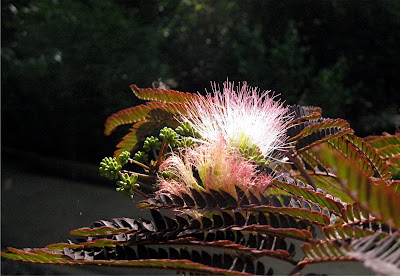 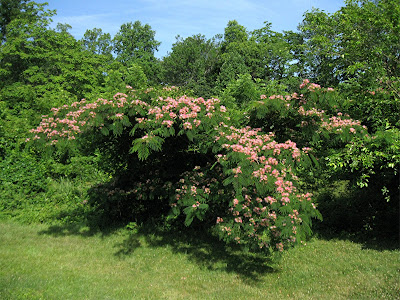 Some plants just don't get any respect and this one must be at the top of the list. I get it farther south. It is a bit invasive from say Richmond all the way to Florida, but not here. Here it seeds about a bit, grows quickly, gets its disease (Mimosa vascular wilt) and dies.

I love the form of the tree, like an Acacia on some tropical savannah, it arches gracefully, arranging its delicately dissected leaves for maximum exposure to the sun. The pink powder-puff flowers have a pleasant fragrance and attract hummingbirds.

Someone asked me today where to buy it and I don't really know. The maroon-leaves variety in the top picture, 'Summer Chocolate' is available in nurseries, but it's pretty expensive. Farther south you see it in nurseries, even a selection or two. Still hereabouts I don't remember ever seeing anything but the dark cultivar. My advice is to locate a mature tree, that's not in a park or arboretum, and dig up a small (1-2') seedling and grow it on. Expect at least two feet of growth per year for a few years. It'll be a tree in no time.
Posted by ChrisU at 2:26 PM 0 comments 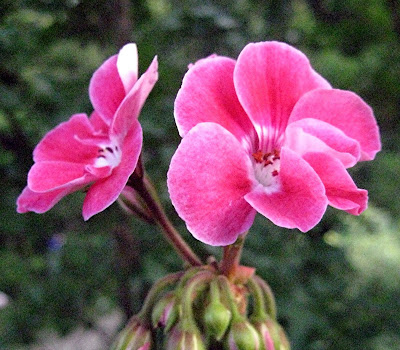 I got home kind of early and finished my posts before it got dark so I took some pictures in the garden. I don't know what this Pelargonium is, I probably threw the label away when I planted it the first year, but I like it becuse the single flowers take rain better than their fancier double relatives. There's a nice double pink on the other deck but I find myself cleaning it daily and that's not one of my favorite gardening tasks. The Gardenia is a standard; it's lived here as long as we have (~25 years). It winters in the unheated section of  the basement. The Veronicastrum I just got from Lazy S's last year. I've always liked this plant but assumed it wouldn't like dry sand. Pete told me his stock plant lived on a dry embankment so I decided to give it a try. So far  so good though it's admittedly been a moist 14 months. We'll see.
Posted by ChrisU at 4:21 PM 0 comments 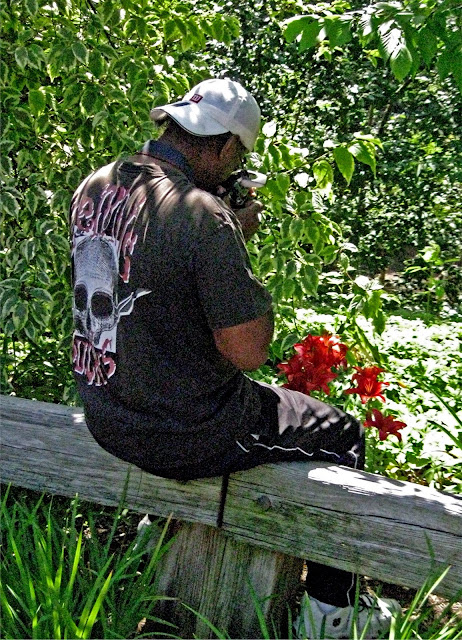 Actually he was a very pleasant fellow.His shirt just grabbed my attention; it's not what most of our flower photogaphers wear. The lilies are beautiful and the morning was sunny and comfortable, if I hadn't been working I would have been somewhere in a garden probably taking pictures.
Posted by ChrisU at 2:55 PM 0 comments 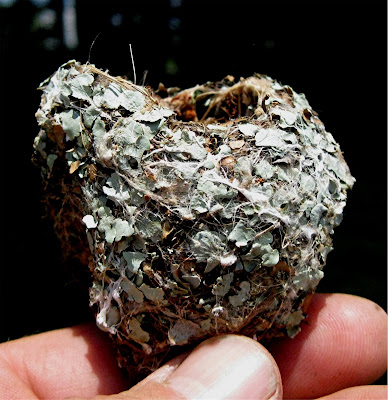 Hummingbird nests are cool. they're woven of fine plant fibers, sometimes with moss, lined with spider webs and plant down (Joan found Sycamore "lint"), and the outside is covered with lichens.

I remember trying unsuccessfully, many years ago, to photograph a nest that I canoed up to on the C and O Canal. The nest was about the level of my head and the sitting hummer didn't spook at my aqueous approach, but I was unable to hold the canoe steady and take the picture. Very frustrating.
Posted by ChrisU at 2:49 PM 1 comments

I read about the medicinal qualities of Angelica last week.....I missed the part about it's being a Soldier Beetle aphrodisiac 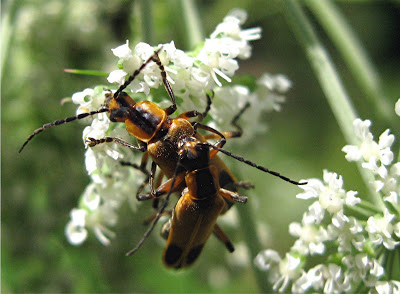 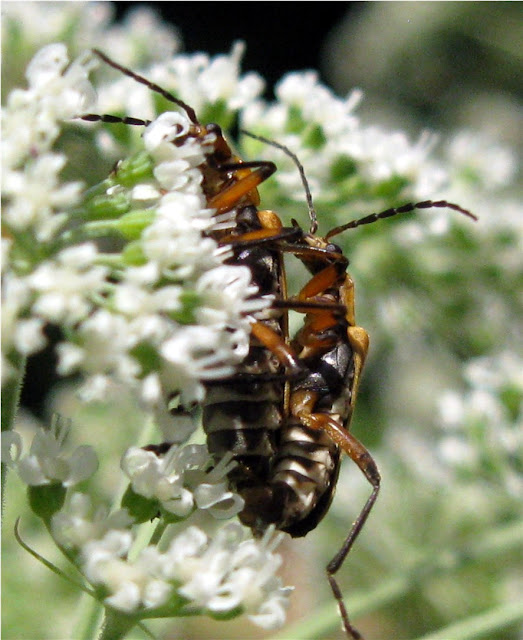 There were dozens of pairs on the Siberian Angelica at the top of the Bloodgrass Dragon in China Valley. The damned weevils are wreaking havoc on Rohdeas and I just noticed they've eaten half of the Vernicia fordii. Still, I just couldn't bring myself to slaughter them mid-coitus. You know what though, I wouldn't mind using whatever the relevant ingredient is here and creating a weevil trap.

Weevils are serious pests of various plants; I associate them with their charcterist notched chomping on Rhododendrons, though they seem to enjoy a wide variety of leaves. There isn't currently any good way to control them, or at least there wasn't the last time I checked. They sure love the nectar of these Angelicas though.....there must be some way to use this weakness against them.
Posted by ChrisU at 2:43 PM 0 comments

Neal potted up many plants today including these Cornus quinquenervis 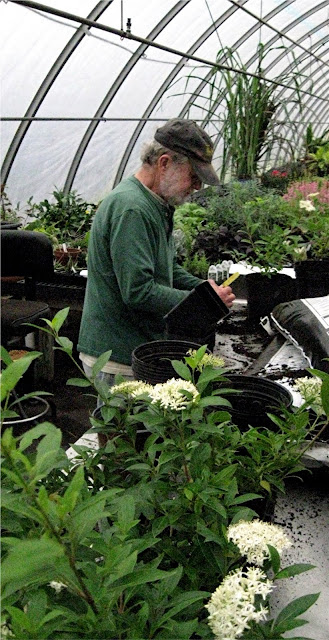 We've been putting of bumping these plants up for weeks and weeks; since rain was forecast all day today this seemed like the perfect opportunity. As I write this at 10:00 pm, it isn't raining and so far we've got .06" of rain. Oh well. Maybe later this week. Or not.
Posted by ChrisU at 6:42 PM 2 comments 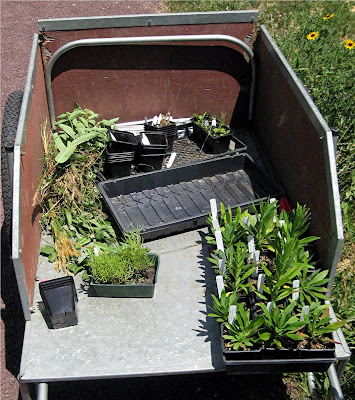 I saw them, FV staff and volunteers, from the road a few times and finally stopped to see what they were doing. They were planting various things in the Meadow and Prairie. I see New England Asters and Talinum in the cart and I heard talk of other Composites. Michael stopped long enough to show me the Rattlesnake master they had planted last year.which have since grown into good-sized flowering specimens.I have photographs of us, Joan, Amy, and I, collecting the seed in Alabama a few years back. 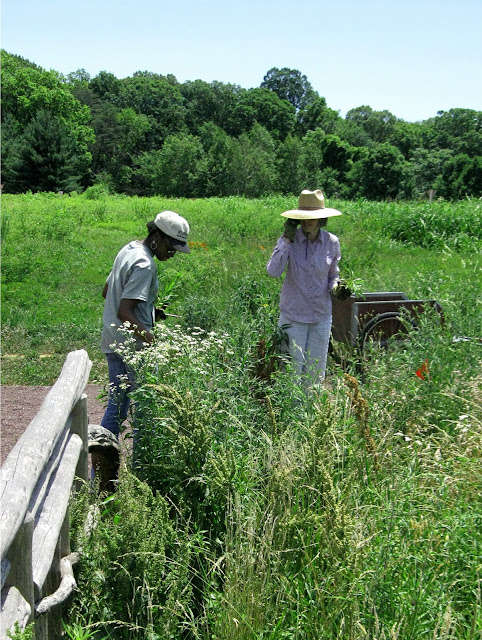 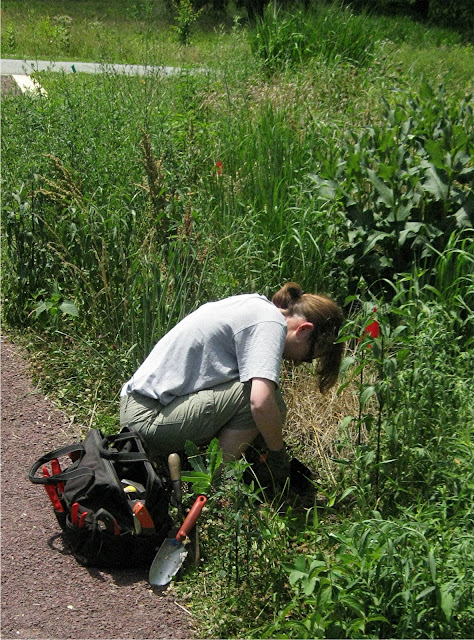 Apparently the soil had dried and was like concrete. I'm not complaining about the spring; though some areas are still retaining moisture, others are beginning to get to the point where some supplemental watering will be in order. At least for new plants.
Posted by ChrisU at 3:08 PM 0 comments

View into the Central Valley from the lower overlook 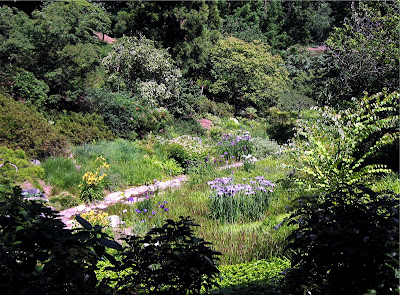 It's pleasant to sit in the shade in the afternoon and enjoy the Japanese Iris baking full sun as I did for a few minutes this afternoon.

It set me to thinking though, that many of the original plantings are still intact, albeit miserably so, on the far side of the watercourse; it's drier over there. Years of curators, gardeners, interns, and volunteers have addressed the wetter "China Valley side" but I have to believe those Azaleas, Nandinas, Japanese Maples,  Quinces, and pedestrian groundcovers have just lingered on.

I'm sure we can do something more attractive and interesting there.....so much ground so little time.
Posted by ChrisU at 2:48 PM 0 comments

Ratibida pinnata in front of the headhouse. I can see one in my front garden out the window. 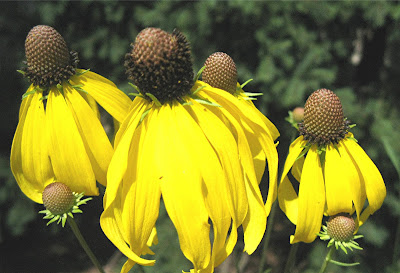 This plant used to irritate me because it was one of only two native plants in all the plantings around the headhouse. Actually it still is, but Brad is extensively planting/replanting areas around the Administration Building and he is using native plants in good numbers.
Posted by ChrisU at 2:40 PM 0 comments 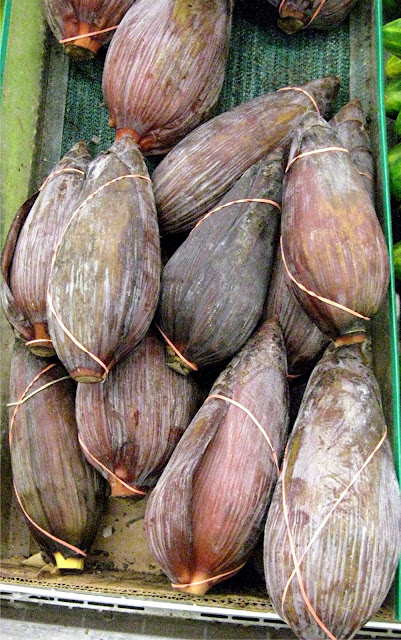 Banana flowers, buds really. Though tempted, I passed on these. I had no idea what to do with them. 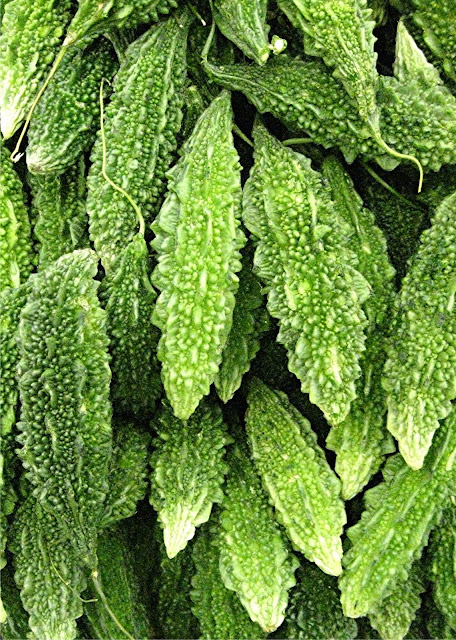 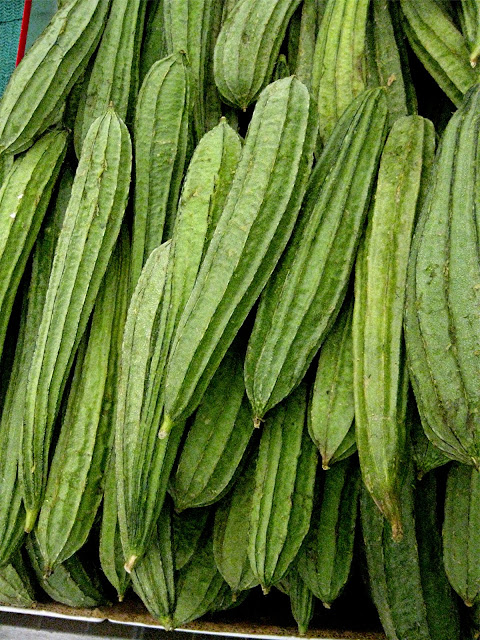 Chinese okra. And there were dozens (100+?) of other exotic fruits and vegetables, a good fish market, and aisles and aisles of dry and canned good from many many places. This is not a paid advertisement. This is just a cool place. The store used to be a large Giant Food store so the variety and quantity are ridiculous and as with most of these specialty grocery stores, the prices are below those at the chain stores.
Posted by ChrisU at 2:15 PM 1 comments

Bletilla ochracea in Washington DC, USDA Zone 7....it's been hardy these past 20 years 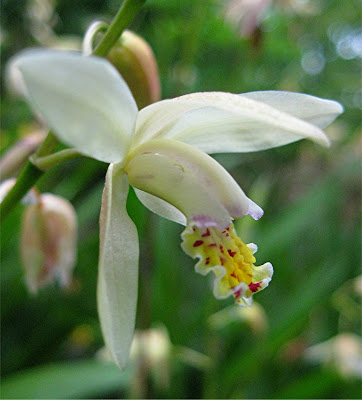 B
Skip March collected the seeds in Japan in 1980. The plants were in pots in the greenhouse in 1991, and planted over a period of years. The initial plantings have become colonies and have survived a few serious Zone 6 type winters. I took this photograph near the red Pagoda.
Posted by ChrisU at 4:39 PM 2 comments 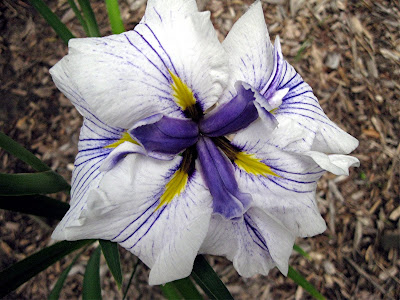 This one is beside the stone steps that lead from the red Pagoda to the China Valley trail.
Posted by ChrisU at 4:29 PM 1 comments