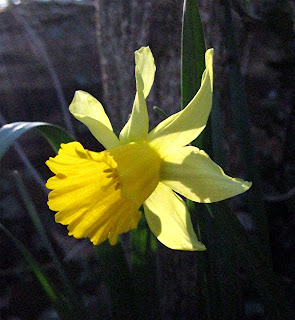 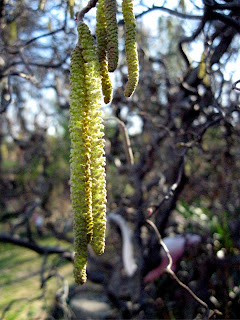 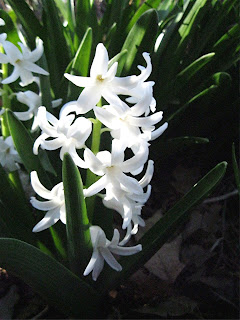 I walked through the garden a dozen times today but didn't take any pictures until the sun had dipped pretty low in the sky. I like regular old hyacinths. They're strongly fragrant, early, dependable, and they neither die out nor proliferate madly.
Posted by ChrisU at 2:10 PM 0 comments 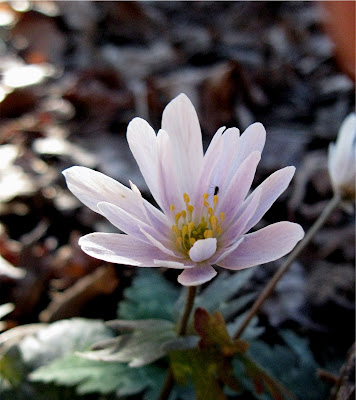 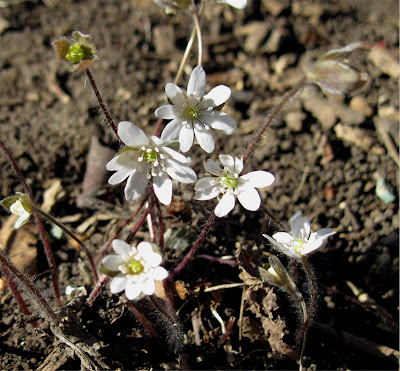 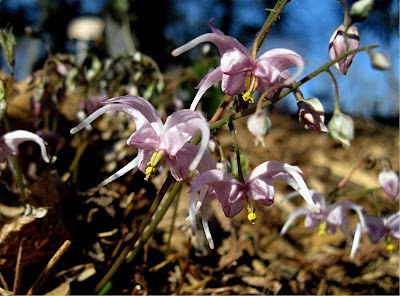 The camellias, cherries, corylopsis, and other trees and shrubs are  hard to miss but there are more subtle elements creeping into play. These are all low woodland perennials. We have, what's the technical term, a bazillion? different epimediums but this is the first. And it's got good-sized flowers. Plus it was wild collected. Seeing the hepatica cheers me up and depresses me at the same time. Within my lifetime, our native hepatica, which had been a predictable resident of open deciduous forests, has basically disappeared. Deer ate them all. I suppose there are isolated survivors, but you can't go for a walk in the woods now in late winter and expect to see hepatica.

Today's temps were reasonable for this time of year, but we're in a cold period. By next Thursday we're looking for 86F, 30C. That's seriously warm. I'm thinking we're 2-3 weeks ahead of schedule, and the odd thing is that I'm not worried about a late frost. It's going to drop to around freezing tonight, a few degrees above or a few degrees below, but that won't hurt anything. I guess I'm foolishly challenging fate by being so confident, but cold just doesn't seem like what's happening this year......Now ask me if I'm worried about ridiculously high summer temperatures and I'd have to admit that that has crossed my mind. The Washington Post weather blog just posting to the effect that very warm winters are normally followed by cool summers. I'm not completely convinced.
Posted by ChrisU at 3:21 PM 1 comments 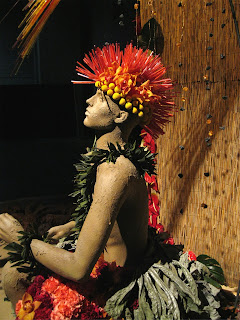 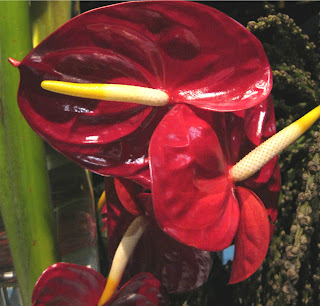 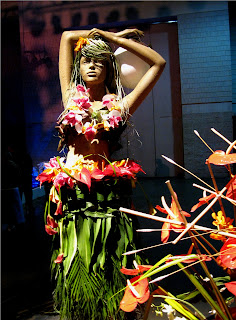 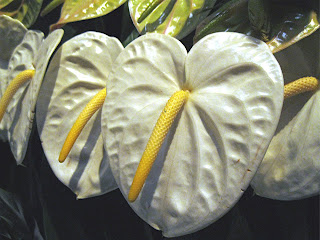 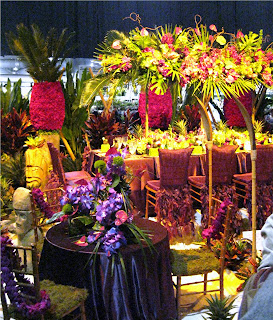 This is my kind of show: serious colors, hot colors.    Anytime more than one display uses the multicolored, orange/red/yellow/green variegated crotons massed as calming elements..... I liked it.

A few years back we developed a game plan of leaving late, arriving mid-day, eating lunch in Chinatown, and only then going to the show. This allowed time for the masses of early arrivals to disperse towards the back of the show leaving the major exhibits less crowded. At least it did for a few years. This year things didn't seem to open up till late afternoon. I suppose more attendees is good news for the flower show but not so much for individual visitors. Still it was a good show and I enjoyed it.

I stopped by the Dragon Agro Products booth to say hello and bought a plug of one of the new hardy banana, Musa 'Mekong Giant'. It's reputed to grow to 40 feet but I'll be happy with anything over 15. Still forty would be nice. I also picked up a flowering 4" pot of Pavonia multiflora, Brazilian Candles, a cool member of the Malvaceae which, until now, I had known only from a picture in the Logee's catalog. I passed on the Worselya procera, the blue Amaryllis, though it seemed like a steal at $400.00. Well, maybe it was a bit out of my range.
Posted by ChrisU at 6:39 PM 0 comments 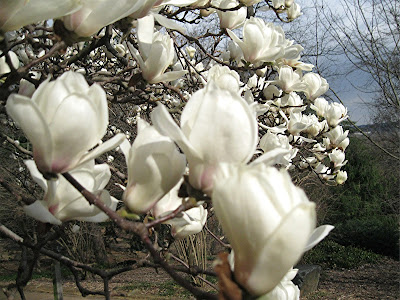 29F last night didn't blacken the magnolias; they look as good as they have ever looked. Starting tomorrow night it's going to be above freezing for a while. The thing is, that leaves tonight; tonight the forecast low is 26F. That is so on the edge. Actually it's a degree or two too cold. But maybe we'll get lucky. It doesn't look too good. Right now it's 41F with strong winds from the NW. That's where the cold comes from. It'll all be over in 15 hours one way or the other.
Posted by ChrisU at 2:37 PM 1 comments 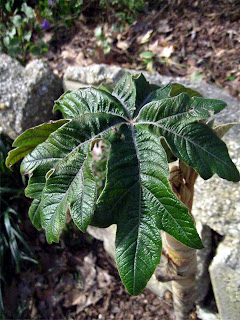 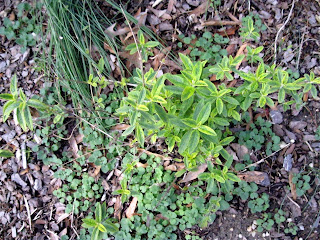 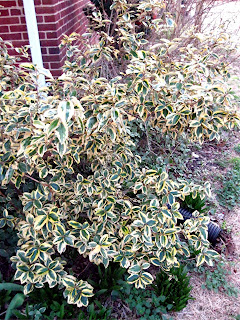 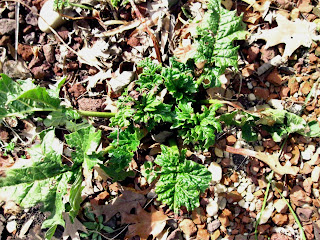 They aren't pretty; they are expressions of this exceptionally warm winter: things I've not seen before in the 26 years I've worked in this garden.

From the top Tetrapanax papyrifera, while dependably hardy, has not, before this year survived above ground. Buddleia is perfectly hardy here and often retains some small percentage of it's foliage through the winter. I planted this variegated cv. last fall and not only has it not lost a leaf, it has actually grown leaves during the winter. Elaeagnus x ebbingei 'Gilt Edge' has lived on that nw corner for 20 odd years and has never before gone through a winter with it's leaves intact. They typically scald sometime in January or February so that he plant is hideous for the balance of the winter. Finally at the bottom is Acanthus mollis that has never, in ~15 years, kept an evergreen presence throughout the winter.

As I notice other instances I'll add them to this post so that, by spring, I'll have a more complete list of this winter's anomalies.
Posted by ChrisU at 8:05 AM 0 comments