Mum in the Asian Collections 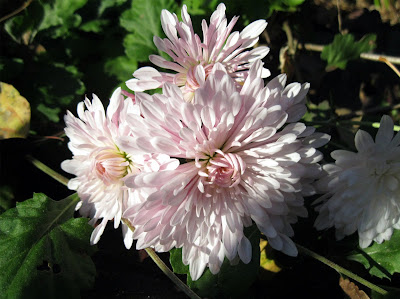 Well, this is embarassing; no, it's Diuranthera major 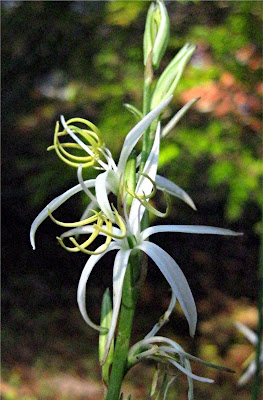 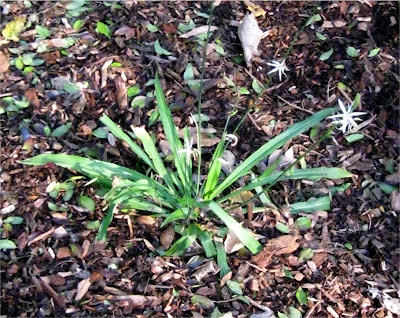 I didn't have a clue until Amy told me what it was. With the name in hand I googled it, but save, as she observed, it's entry in The Flora of China, and a few scientific papers, it seems like it barely exists. It's right there in the middle of China Valley and I had no idea what it was. There were a few other people at the Arboretum this afternoon, who shall remain nameless, who also didn't know what it is. Still, it's my job; I really ought to have known and I feel.....well stupid sounds harsh. Ignorant, I feel ignorant.

It's an intrepid thing, flowering past the middle of November. Between the combination of late flowering and the curious configuration of the flowers, there's a place for this plant in the gardens of the "Plant Geeks".
Posted by ChrisU at 3:31 PM 4 comments 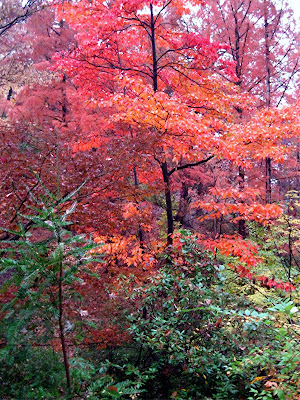 This is for real color. The saturation may be, well is, exaggerated because it was a dismal gray day, but that's what it looks like. This grows in the central valley. I took this picture from the ridge on the south edge about 50 feet beyond the pagoda. I have always loved our NA native Sassafras albidum which also has great fall color and I like this Chinese species too. The leaves are a little bit different; most are 3-lobed and the lobes are tipped. And it's not as fragrant as its NA counterpart but it's a fun plant.
Posted by ChrisU at 4:17 PM 1 comments

Leaves can be nice on the ground too.....but you've gotta look fast 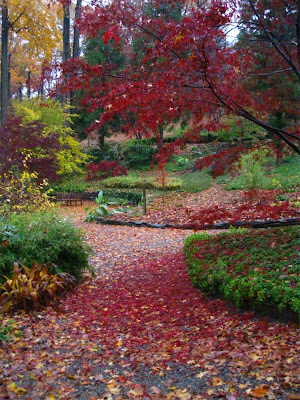 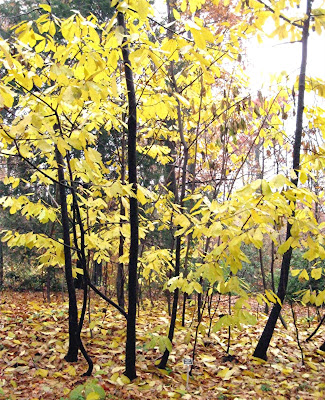 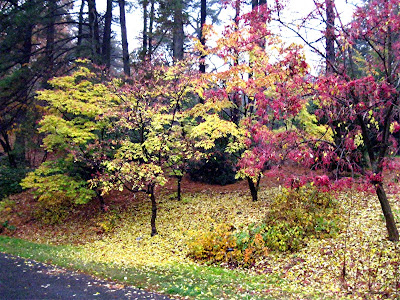 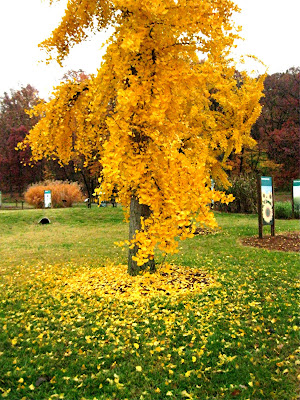 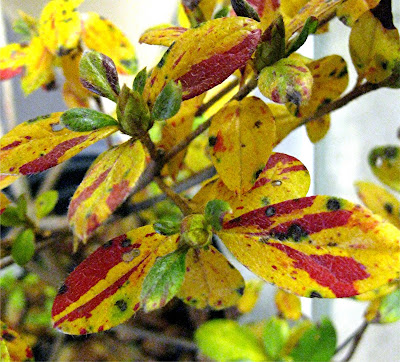 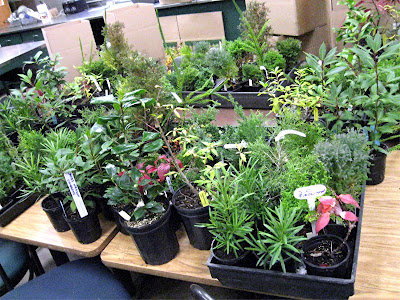 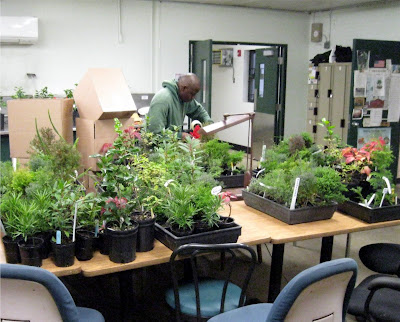 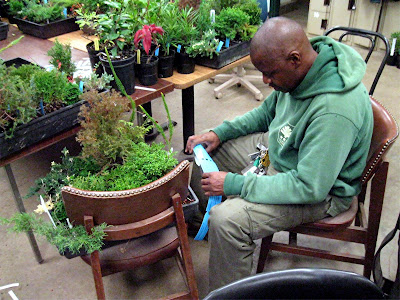 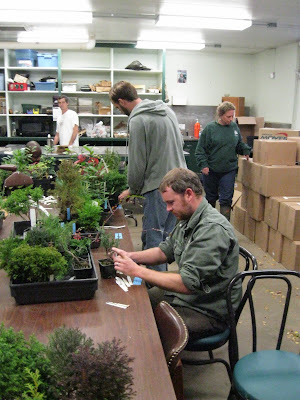 We did a lot of sorting and labeling and packing and addressing today and eventually shipped out 30 some boxes of plants. Camellia x 'Anacostia' is our introduction. Stachyurus praecox var. 'Matsuzakii' is not our discovery but we highly recommend it. The various conifers are plants that we produced as part of the monumental reconstruction of the Gotelli Collection. Chris, Mariya, George, and a few propagators have been working for years taking cuttings and growing them on to produce plants to replace many of the existing Gotelli confers that have outgrown their aesthetic. It's a huge project and one that the rest of the staff is watching with interest. Since it's been going on a few years many of the older larger plants have been removed and their replacements are beginning to have enough size to exhibit some "presence" in the garden. It's going to be along process but we're (they're) far enough in that it's beginning to be exciting. Anyway there were excess cuttings and we've now distributed them to a variety of public gardens and Universities.

Seeing all the plants on the table increased my respect for Mariya's and George's abilities as growers. I order a lot of plants and sometimes I'm happy (mostly) sometimes not. If I opened a box to find one of these assortments I would be more than satisfied.

Part of our shipping includes boxes of paired azaleas: 'Dimity' and 'Bagatelle'. These are Glendale hybrids. Barbara Bullock, the Azalea Curator, is working to reintroduce the Glendales to the commercial world and we distribute two new old ones every year. The top picture, with the oddly blotched fall foliage, is 'Dimity'.
Posted by ChrisU at 3:46 PM 0 comments 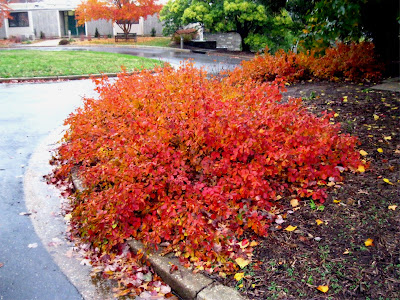 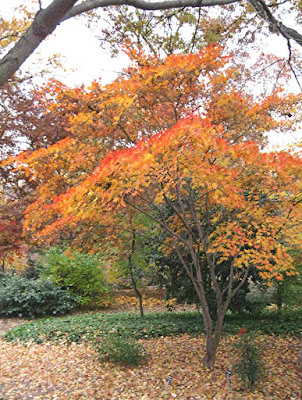 Got a lot done in two days. Not everybody's idea of fun gardening jobs. We weren't deadheading roses or planting pansies or doing a bit of minor weeding. Yesterday Telly and I spread 10? tons of CR-6 on trails and tamped it down. Today I blew leaves all day. Aggghhh! The good thing about blowing today is that the leaves are at least half down, dry, and fluffy, and so easily moved. It's going to rain a lot tomorrow so today we moved leaves where we'd like them to stay permanently. If things go as planned the rain will mat them down and they can commence decomposition.
Posted by ChrisU at 3:55 PM 0 comments 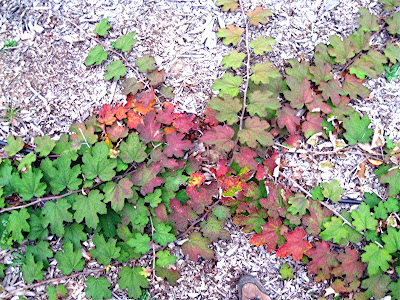 If I recall correctly, I planted this towards the end of June this year. I seem to remember it having something like seven or eight leaves. It has grown. It has a span of about 15 feet right now I ought to have put something in the picture for scale; each leaf is 5-7" across. It remains to be seen whether it's evergreen, but in every other respect, this seems like a megahuge Rubus calycinoides. Can't wait for the fruit next year.
Posted by ChrisU at 3:44 PM 0 comments 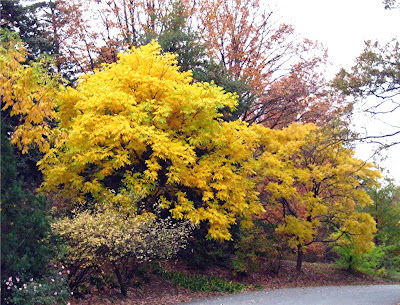 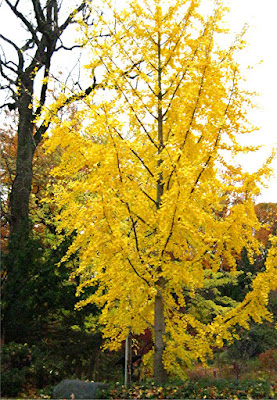 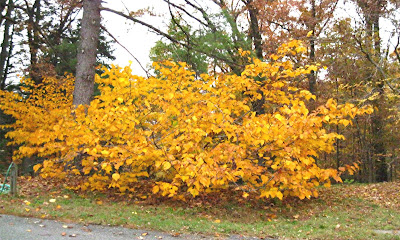 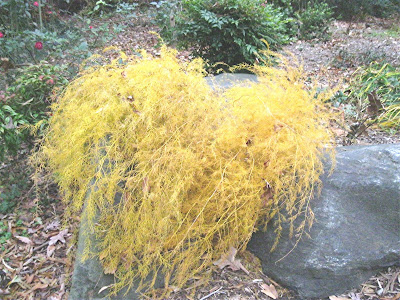 Sapindus is a wonderful small tree. Drought tolerant, disease and pest free, and it always seems to assume an attractive shape. The architecture of trees is important. Here in the US, we generally, present company excluded, tend to plant our trees then let them grow/go their own way. Every garden culture is different; some, present company included, start pruning when from the time the tree is planted and decreasingly but regularly until it's no longer in our care. Our goal is to produce a perfect specimen of whatever individual we're working with. We want the Platonic Ideal out of the cave and in the garden. The plant becomes then, a product of our conception and execution. To be a good gardener requires a large component of ego! Anyway, Soapberry is a tree that tends not to need a lot of pruning, a tree that can be trusted to reach maturity without a lot of input from us gardeners. 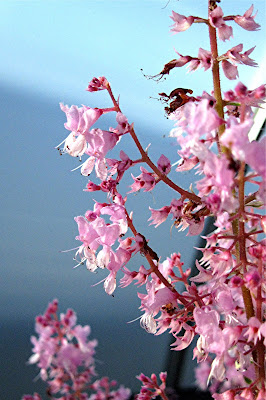 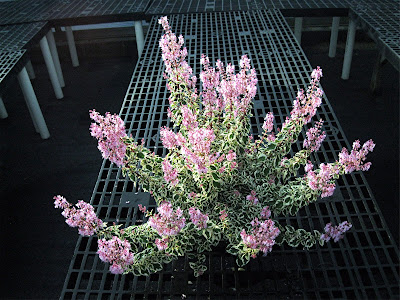 I'd never seen this plant before today. I had weekend watering today and there it was in Polyhouse 7, looking like a rangy variegated wintercreeper with pink flowers. I didn't touch it but research tells me that the leaves are fragrant as leaves of members of the mint family are wont to be. It's really almost too much. Like the variegated Weigela that was on the cover of the Spring Hill catalog for so many years. Actually almost exactly like that on a smaller scale. Are they out of business, Spring Hill Gardens? They used to ship plants so small they were barely more than rooted cuttings, or tiny roots with the barest of shoots. When I was landscaping I had clients from time to time who would order quantities of plants from their seductively colorful catalog, then call me to plant them. You know what? If you get 'em in the ground before they dry out, a surprising number of those macropropagules actually lived. Go figure.

Anyway, I never heard of this plant before, or the genus, actually either of the genera. From South Africa, it's a sub-shrub in the Lamiaceae, growing to almost 2m in height. This plant was identified as the cultivar 'Candy Kisses' which almost makes it worse. Apparently it has made it's way to Australia and to North America too; Brad got hold of this from somewhere.
Posted by ChrisU at 2:06 PM 3 comments