Beltsville Library: the question is, do I let the Black-eyed Susans take over the whole garden? It is the Maryland state flower 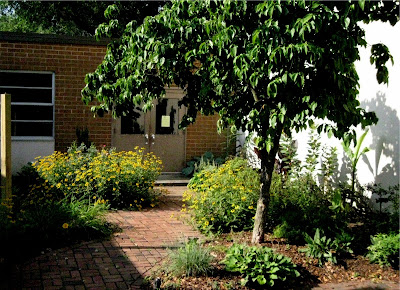 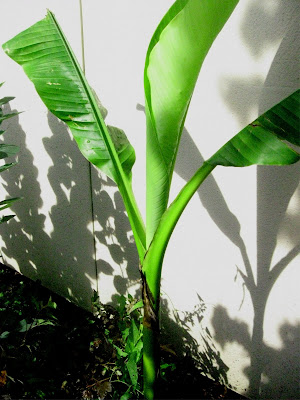 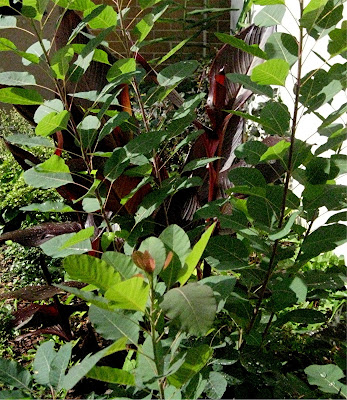 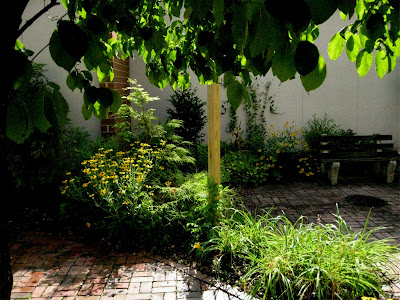 It rained last night, less than 2/10 inch, so I went ahead and watered at the Library. It was great to see that the Basjoo banana I transplanted a few weeks ago had finally taken hold and actually pushed out a new leaf. I ought to have chosen a smaller plant to move in the middle of the summer, but I wanted this one gone from where it was and it seemed like it would be nice to start with a 4 foot plant so... It languished for almost three weeks until we got all that rain last week (>3"). Now it's off to the races. Actually, that rain seems to have been a signal for all the tropicals in the DC area to explode. In my own garden I think the leaf surface on tropicals has doubled in the last week. Bananas, the big Aroids, Philodendrons, Cannas, Gingers of all sorts have all gone wild. It's an amazing phenomenon, the transition of a northern temperate area in to a place so hospitable to equatorial flora. It's hard to believe we had over 2 feet of snow on the ground 5 months ago. For the next two months it'll be like living in Zone 10 or 11even.

We're going to Florida Thursday next; I've got a list of plants that'll go into the garden including several new palms. Because the weather here is so tropical now I often bring back Heliconias and Gingers for the balance of the summer. Hey, you can get a 1 gallon Heliconia for under 5 dollars. I can't help myself. Did I say that? I sure did. My intent is always to let them go with the frost, but it's hard for me to let things go. I usually end up nursing them through the winter in semi-dormancy in the cool section of the basement.
Posted by ChrisU at 12:49 PM 0 comments

Ipomoea quamoclit (in a container at the Scott Arboretum) , Crinum x powellii and Phygelius x, (both in Adelphi) 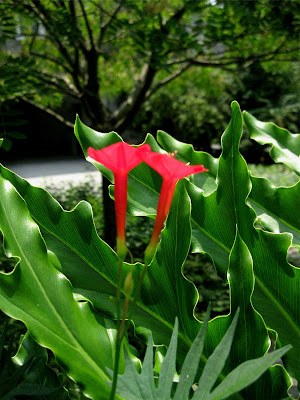 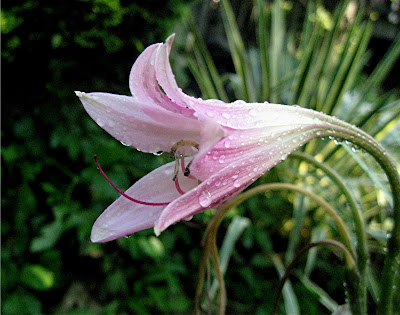 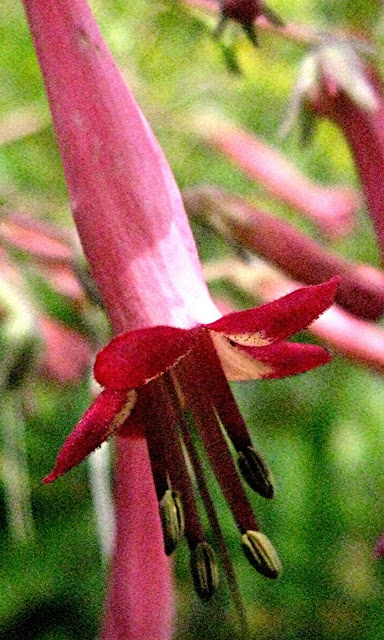 Just pretty flowers. We're approaching that time of year when gardens are beginning to look frazzled and blowsy so we have to excise bits of beauty from the chaos! Fortunately there are plenty of them about.
Posted by ChrisU at 10:16 AM 0 comments 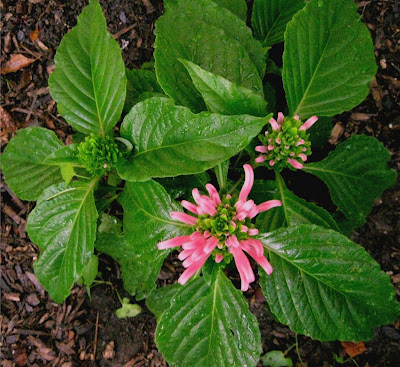 Usually considered a flowering house plant, I got this at a plant exchange with the claim that it had overwintered several consecutive times in New Jersey. I planted it in the courtyard garden at the Beltsville Library a year and a half ago. It made fairly good growth last year, flowering towards the end of the summer. I had always known it as a Zone 9 plant so I wrote it off as an annual. Recent research reveals that its pretty generally considered a USDA 8 now. If I'd bothered to find that out last year I would have mulched it heavily; I didn't. Last winter was a moderate winter but there were a couple of single digit days so I'd have to say it was a legitimate Zone 7. Of course one year doesn't even begin to tell the whole story, but indications look good for Zone 7. It emerged fairly early this spring unlike many of the "hardy tropicals" that often don't show their noses until late June of July. Also, it didn't start the season with that look of "recovering from a "near death experience" that I often see on tropicals that survived but probably won't for more than a year or two. It came out vigorous with good color, acting like enough root system had survived to allow it to function from the moment it broke ground. If I had to guess, I'd say this one will be dependable.
Posted by ChrisU at 10:06 AM 0 comments

I stopped by the Agricultural Library this mornign and Wow, somebody did a lot of weeding 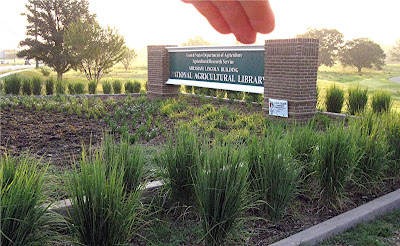 The planting is way bigger than it looks, My hand is just there to prevent the sun from blasting the picture.

I'm sue it was Karen and an assembled team. They did a great job. The plants themselves are doing well. Panicum 'Northwind' isn't my favorite Switchgrass; it's real vertical and real big, which are good characteristics here. The building itself is so stark and vertical the grasses are appropriate. Normally I like the steel blue of 'Heavy Metal' but this cool green work well with the teal on the sign. Invisible, but around the perimeter are the dwarf Waxmyrtles, wonderful plants for a tough site. The perennials, with the weeds gone, are looking goog. Fron the Left Sedum "Angelina, Kalimeris ;Blue Star', Lovegrass, and mostly behind the sign Black-eyed Susans.I think, after this wonderful weeding, that I can walk away and all will be well.
Posted by ChrisU at 4:09 PM 0 comments

This is just from last night, it doesn't count the 1 inch that had fallen over the previous week 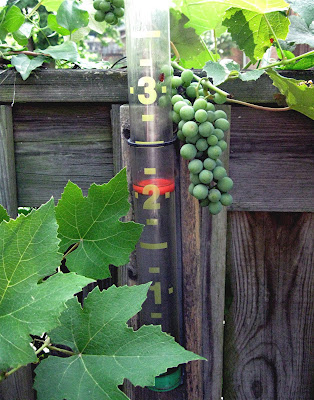 So we're pretty happy, the gardeners and the plants. I'm actually thinking that at this point in the season, the big trees are okay for this year no matter what the rest of the summer is like. They've done their summer thing, this year's leaves, and while they'll (the trees) need to be hydrated this fall for the winter, I think we can relax about them for the next 6-8 weeks.

It had gotten quite dry but the foliage of established trees and shrubs was looking pretty good, dark green and relatively clean and uneaten. George remarked at lunch how, even after three inches of rain, most areas were far from sloppy wet. Turf is just beginning to green despite a good soaking on Saturday. I stopped at the Library Garden on the way to work and a Basjoo Banana I had transplanted from home 3 weeks ago was finally putting out a new leaf. It had looks pretty sad heretofore. I can't imagine what it will do in that sheltered location with generous watering. It'll be a heft clump by the end of next summer I'm sure.
Posted by ChrisU at 3:33 PM 1 comments 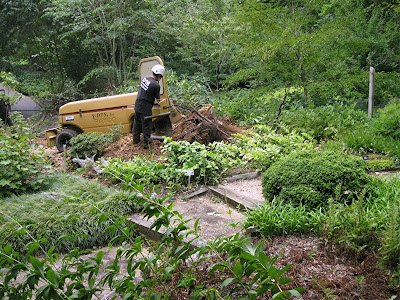 Contractors ground the stump today. Right foreground toasted Ferns speak to the absence of shade, but curiously, across the path behind the the grinder operator at the left side of the picture, is one of the biggest Kirengeshomas I have ever seen and it seems to be doing fine in this exposed oven of a site. We have made extra efforts to keep it watered but still....

We had a project in the collection today; Ed and Michael worked with Nate, Amanda, Neal, and I to mulch the area past the Red Pagoda. We put ramps over the steps for the wheelbarrows and used fairly coarse wood chips. Neal, of course, scoffed; he feels that nothing but the best mulch is good enough for the Asian Collection. I like this blend though. It isn't a highly visible area and we may not get back there for a few years so we need something that'll stand up.  Anyway we were in great position to observe the stump grinding that took place about 50 feet from where we unloaded our wood chips.
Posted by ChrisU at 3:17 PM 0 comments 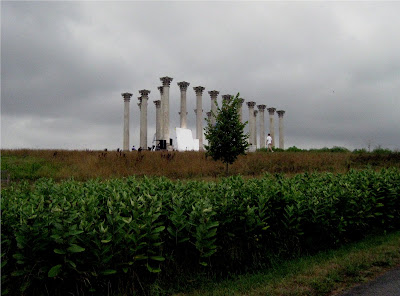 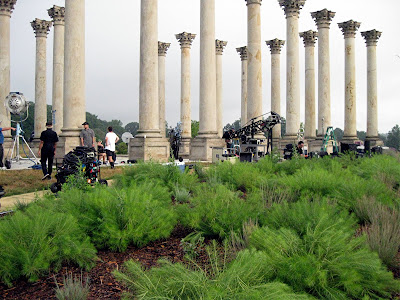 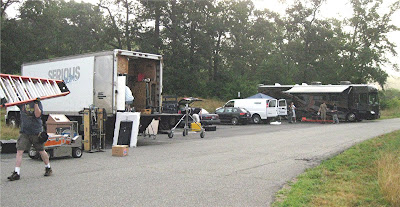 But it looked to me like they were signaling an alien lifeforms on a spaceship. I got to work a little before 7:00 this morning and there were 50 people milling around between the Capitol Columns and the small parking lot adjacent. They ran huge cables everywhere,set up  banks of 10 foot parabolic reflectors, a huge boom, enough light to light the ellipse in the dark, and, get this, a food service. I was impressed but I wasn't hungry. They went about their business all day and were still there when I left just after 4:00.
Posted by ChrisU at 3:56 PM 1 comments 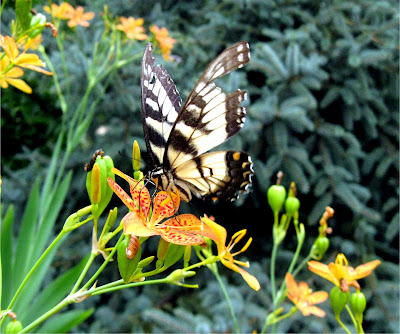 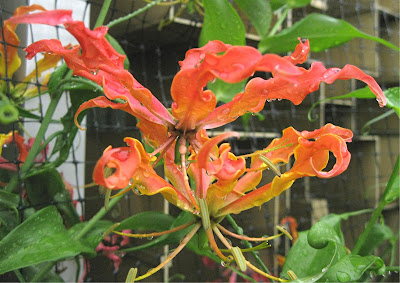 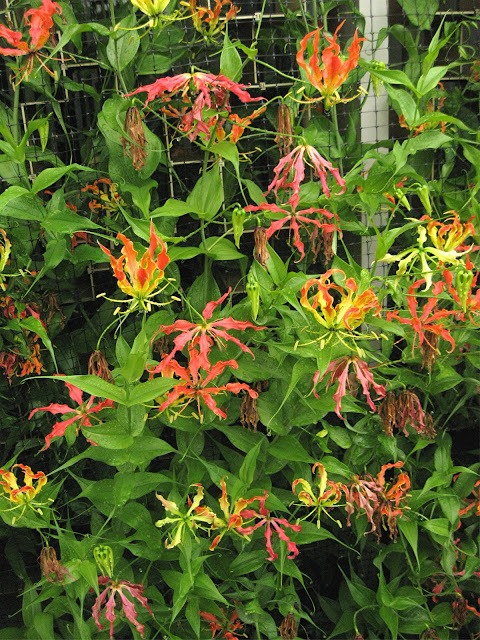 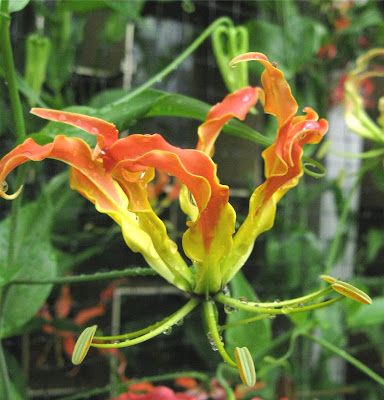 These are so over the top they make me self conscious. This giant planting is to the left of the entry walk to the Administration Building at the USNA. Gloriosa Lilies aren't dependably hardy here (in DC in Zone7) or at least they weren't until recently. This is quite a sheltered location and this planting has been getting larger and larger for years. It's quite something.
Posted by ChrisU at 3:46 PM 0 comments

Joan sows fern spores that she collected on a recent trip to Linden, Virginia 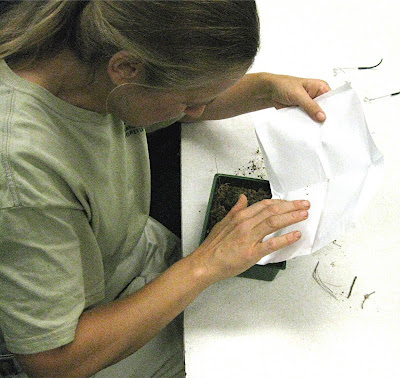 She and Chris Carley traveled to the G. Richard Thompson Wildlife Management Area  a few miles this side of Front Royal. It's a large site, just under 4,000 acres, and apparently a hot destination for hikers and nature enthusiasts.Trilliums were the target species and they collected a good quantity of Trillium seed,  but they got a number of other things as well, including a white Monarda and this Fern. Joan managed to get completely permitted....for collecting plants and seeds. She did mention to me that there's something that they just missed and she'd like to go back and get it. Lopseed?

There seems to be a lot of Fern production via spores at the USNA lately. I noticed Stefan has produced 3 different flats of plants, Joan has started this flat, and Amanda is going to sow spores from a wonderful Asian Fern that live alongside the path to the Pagoda. First grafting, now spore sowing....we're all over the board.
Posted by ChrisU at 2:58 PM 0 comments 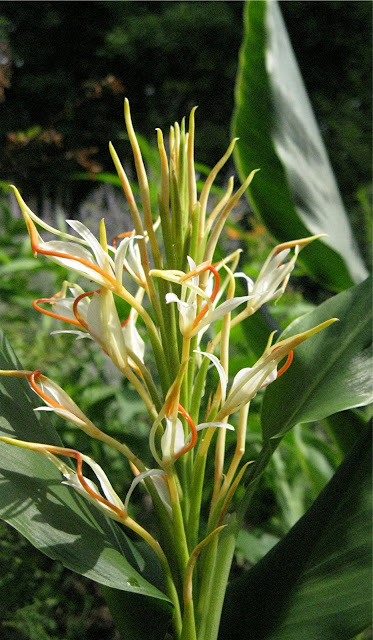 It's the first Hedychium to flower, even beating our old Hedychium coccineum which has always been first. The more I know this plant, the better I like it. The flowers are colorful without really having any substance and they're pleasantly fragrant, strong but not overwhelming. The plants are shorter and hardier than most species and seem to multiply more rapidly.
Posted by ChrisU at 2:38 PM 0 comments 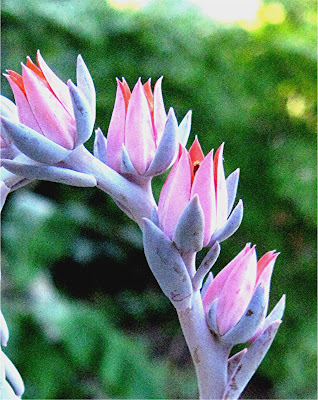 It's one of my favorite plants. The bloom on the leaves and stems is wonderful, the color and shape of the flowers are great, I could admire the arc of the flowering stem for the 6 weeks it's in bloom, and it's so easy. I abuse it all winter; it goes back and forth between etiolating when I water it and dropping leaves when I don't but here it's flowering again just like I'd treated the way it deserved to be treated.
Posted by ChrisU at 5:29 PM 0 comments 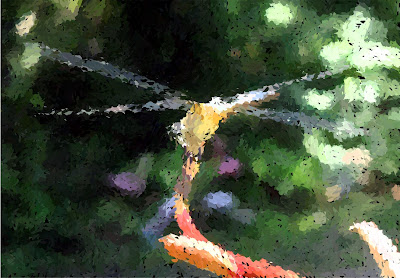 All right....I was finishing a design and doing the plant list and this dragonfly perched for, oh an hour or so right outside the window. My first thought was that if I went out to photograph it, it'd spook and so it was better to just keep working and check it out off and on. Well, after an hour I decided what the heck, I'd try to photograph it and I got one shot before it flew and the shot was okay, actually I liked it but it was from the back and seemed sort of odd. I like to play with the filters every few months so I tried about twenty of them and I sort of liked this one. If you use your imagination you can tell the plant on the right is a Pelargonium. I know it's offensively....ersatz? or something, but I like it anyway, and now it's out of my system for another six months.
Posted by ChrisU at 5:13 PM 1 comments