Gardening is alive and well in the City....Maxwell tills in Leafgro 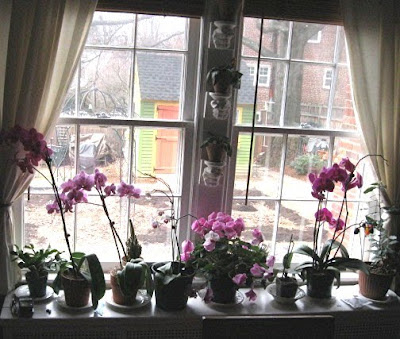 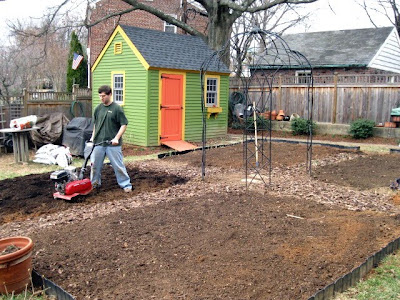 Max had a bit of tilling to finish up this morning so I rode with him. He and Peter have been working in this garden for a few years now. They dug the beds initially and now till in Leafgro a time or two a year. We've had a bit of rain over the past few weeks and I was a bit concerned that the soil would really be too wet to work, but they've improved it so much that it seems to drain and consequently was in good condition to work.

The vegetables, though the space is good-sized, are the lesser part of this garden but I'll save the ornamentals for another time. There's a good view of the vegetable garden from the dining room but you have to look over the Phalaenopsis. I love the shed.
Posted by ChrisU at 2:16 PM 0 comments

Sorry Carole, I cut your face off! 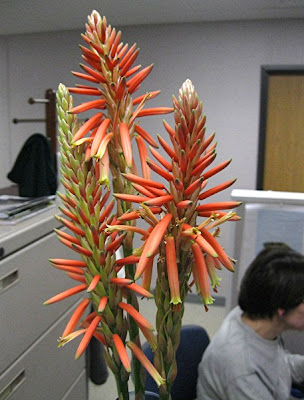 Who ever heard of cut Aloes? Well, until we get the Adminstration Building back, some plants will flower in the greenhouses. Brad cut these aloes and I like the way they add a touch of color to our essentially colorless temporary quarters.
Posted by ChrisU at 4:44 PM 1 comments

Magnolia denudata, Yulan magnolia.....it's going to flower this next week 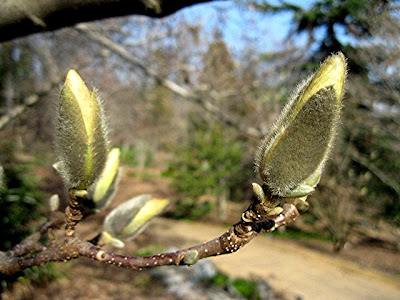 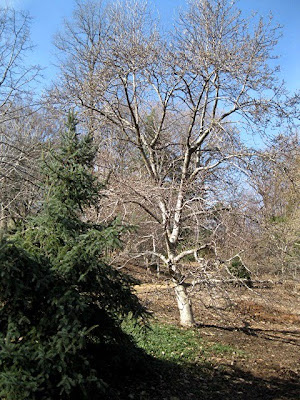 Magnolia zenii, Magnolia biondii, Magnolia kobus, stellata, officinalis, fordiana.....we've got a lot of magnolias in the Asian Collection. There are a lot more in the adjacent Holly Magnolia Collection, not to mention the native species in Fern Valley and the cultivars spotted around the grounds.

The early, i.e. "precocious", (a technical term so far as Magnolias are concerned) will begin flowering any time now. The large flowers of the early magnolias are almost all fragrant....wonderful plants except that occasionally a late frost will nail them, turning their flowers to brown mush. The good news would be that the 17 day forecast has essentially no freezing nights, except maybe one at 31F and another at 32F. It should be another good season; that will be our third in a row. I probably shouldn't have said that....tempting fate and all that. Oh well, too late. come and see them anytime from mid-March to early April.

Many previously independent generea have been collapsed into "Magnolia". If you want to take your magnolia knowledge to another level, register for our April 2 Magnolia Study Day with Andrew Bunting, who is the president of the Magnolia Society International and the curator of the Scott Arboretum at Swarthmore. Just hours ago, Carole told Pat and I that we could show up for the festivities and I'll definitely be there.
Posted by ChrisU at 4:23 PM 0 comments

Stewartia rostrata, Beaked Stewartia....now I get it 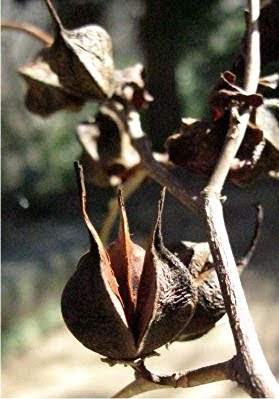 If I ever saw a "beaked" fruit, that's it. This Chinese stewartia lives alongside the path to the Pagoda on the China Valley side. It looked pretty miserable last summer, likely because, ofter the big Cedar came down last winter it was all of the sudden in full sun. The leaves bleached and large portions of them died. There wasn't really anything we could do about it. I'll be curious to see how it does this summer. My guess is, a lot better. This site isn't punishingly exposed; I bet it can adjust. Anyway, this year I'll pay closer attention.

I'm embarrassed to admit that I've sort of ignored it heretofore. The flowers are supposed to be quite large, and that sounds right, but it's also supposed to be fragrant and I just missed that! Even among Stewartias, or Stuartias as the British have it, this species is quite uncommon, a rare species in an uncommon genus.
Posted by ChrisU at 2:12 PM 0 comments 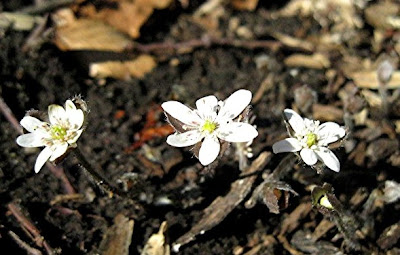 The flowers are about the size of a nickle; some spring effects are subtle.
Posted by ChrisU at 4:28 PM 1 comments

I was sad much of Wednesday

I spent most of the day depressed by this post on Garden Rant. When I looked again in the evening, I felt a little better; the comments seemed to have reached a nadir, then slowly arced towards the sane or reasonable. Is there a significant difference between a species being driven to extinction or only to the brink of extinction? Aren't we just splitting hairs?

There have been tree-like plants on this planet for almost 400 million years, insects appear somewhere around that time. For the duration of history, that is to present times, plants and insects, then other animals, as they appeared, have coevolved in a complicated, entwined, convoluted dance. The species that exist, the subspecies, are delicately tuned, finely connected in a web of interdependent relationships that we've only begun to explore. The reason organisms are beautiful, fascinating, complex is because they had to be to fit into the fabric of life.

I'm a gardener, not because I like huge peonies, or lilacs, lilies, or roses, (which I do), or because I want to grow my own food, which I do, but because I, selfishly, want to cultivate those fascinatingly complex and beautiful products of half a billion years of evolution. I want to spend every hour of every day of every year watching and absorbing the intricacy that is life. The plants in my garden come from Australia, Africa, Asia, Europe, and both Americas. The insects that fertilize and or feed on my plants are as beautiful and as interesting as the plants.

When I listen to arguments "against nativism" I smell sophisty and demagoguery. I'm not a "nativst"; I'm a "plantist" or maybe an "ecosystemist". I realize eradication is futile and a great waste of resources but at the same time it seems like we ought to work to preserve functional remnants of ecosystems. Maybe that means being a little bit careful about what we plant where. To do that we have to be honest about the behavior of all plants and animals. Our native White-tailed deer is more destructive than the worst "invasive non-native". Let's be honest about the effects of that small handful of plants that do do tremendous harm to sites that are already stressed by other factors. This is where I take issue with

There is no "Science" in upper case that speaks for whole disciplines. There are only scientists who make observations, ask questions, devise experiments, draw conclusions, and make theories. From there on, it's up to us. We have to decide which conclusions we accept and relate those abstract concepts to reality. I haven't read How the Government got in Your Backyard (I look forward to it), but it seems a bit misleading to emphasize the fact that no non-native plant has ever driven a native plant to extinction and deemphasize the fact that an few enthusiastic handful have helped push many to the brink.

I read and reread Peter de Tredici's book and flirted with the idea of rebutting his contention, implicit and explicit, that there are no invasive plants that seriously affect unaltered environments, but refrained. I suspect he intentionally excluded the southeast from his book. Otherwise how do you respond to tens of thousands of acres of Ligustrum overrunning everything, Kudzu, Lonicera japonica? Of course he glosses over the effect of Norway Maples in the northern Appalachians and Hedera helix in the mid-Atlantic.

I guess I just love the world the way we inherited it. I know change is inevitable and it's the way of evolution, but it's hard to see so much biological diversity disappearing in my own lifetime.
Posted by ChrisU at 3:21 PM 1 comments 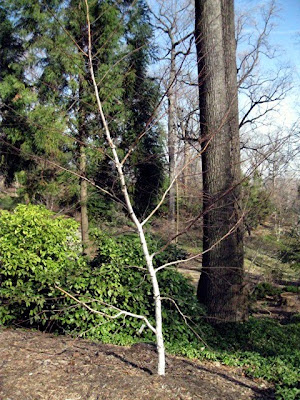 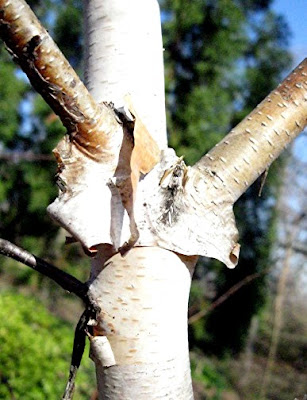 Seed wild collected in 1994. This Birch was introduced in 1880 but is, to my knowledge, mostly unknown in this country. The bark is clearly nice and so far we haven't had any of the typical Birch problems: no borers, nothing on the leaves. This plant is growing on the road where the path to the pagoda begins. I remember when a huge evergreen oak, Quercus myrsinifolia, grew on this site. The stump is almost in the frame on the right hand side.
Posted by ChrisU at 3:11 PM 0 comments 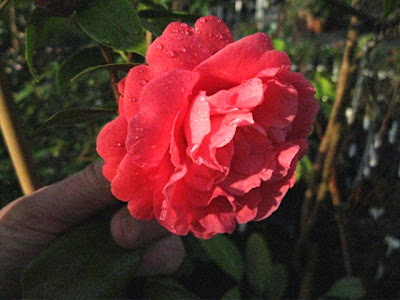 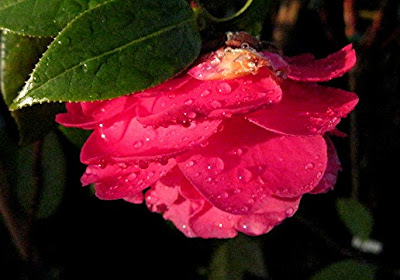 They're nice, but I think I like the partially open buds.
Posted by ChrisU at 2:35 PM 0 comments 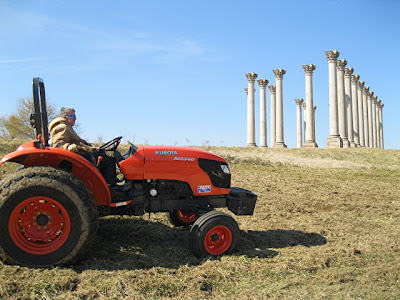 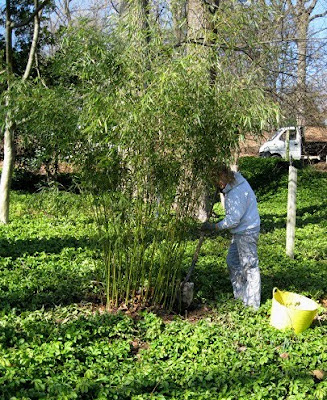 We decided to only make 4 divisions from the Fargesia robusta, leaving half of it in the hole. We moved one piece, the one next to Amanda, across the path and the other across the GCA circle. Nathan took a piece too which he definitely earned by supplying the muscle to actually effect the divisions.

After break, Amanda and I finally dealt with the cutback Berberis thibetica. We divided it into two pieces and put them, facing each other, on slopes at the bottom of China Valley.
Posted by ChrisU at 2:26 PM 0 comments

This is not your grandmother's Amaryllis (it's a Hippeastrum) 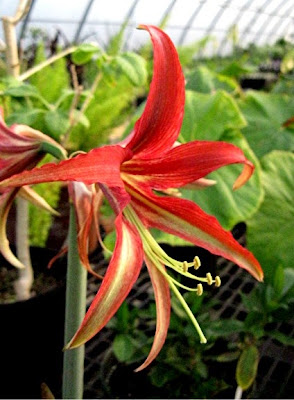 This tag suggests it was in the Director's office when Dr. Elias was here. In 2004 the Arboretum staged a huge Amaryllis show. I'm sure this plant is a survivor of that show. I'll have to ask George (Waters) about it because he's Mr. Hippeastrum and knows all things Amaryllis.
Posted by ChrisU at 3:07 PM 0 comments 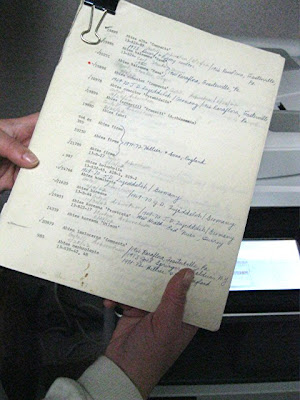 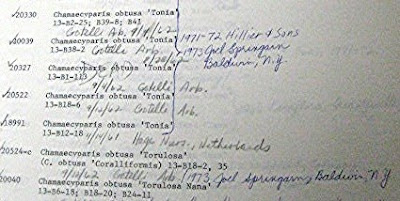 It's an early listing of the Gotelli Collection, that includes data that isn't in BGBase. Many of the original sources are penciled in, or presumably that's what they are. At any rate it's interesting to see an historical inventory of one of our collections with data "new" at leas,t to Chris Carley, Mariya, and me .
Posted by ChrisU at 3:05 PM 0 comments

Fargesia robusta prepares to be divided 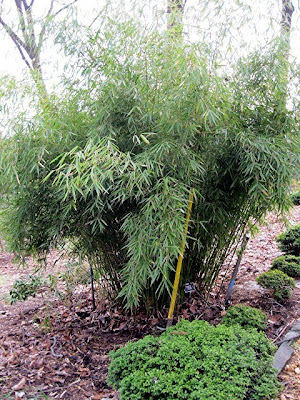 I spent an hour digging this plant this morning. Then the cold front blew in, the sky darkened, and the downpour commenced. It didn't fool me this time though. Not like Friday when I got soaked. If the same sequence of events happens only three days apart even I will spot the pattern....most of the time. The good news is that the forecast 70mph winds didn't show up and the tornado watch came to nothing. It's going to be a good week!

This is a wonderful clumping bamboo, maybe my favorite Zone 7 clumper. It's beautiful isn't it. It' just grown too much. It's invading the path and overpowering the plants around it. Hydrangea 'Domotoi' didn't even flower this past summer. I bet I can get at least 6 good sized divisions from it. Plus a few small ones. I'm going to try to site 3 in this general area; I like my triangles.
Posted by ChrisU at 2:54 PM 1 comments