It started snowing this morning around ten o'clock; it seems to be ending up now at 6:00 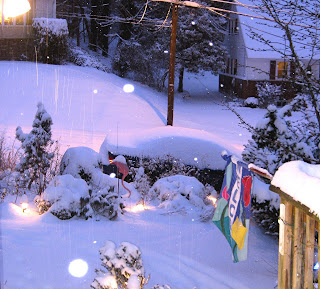 More snow. Like that first big storm (1 1/2 feet before Christmas) this is light and powdery. I'll try the backpack blower tomorrow since it won't be melting any tonight at 13F. If I was a groundhog, I might prefer to stay in my burrow Tuesday and wait for the end of the week when we're supposed to approach 40 again. Oh well....I started a fire Friday night and it'll burn through Sunday night. Joan went skiing and Nate is off to snowboard so I guess winter has its uses. Still, I await spring eagerly.
Posted by ChrisU at 3:33 PM 0 comments 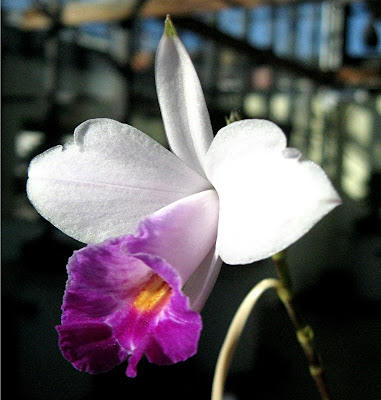 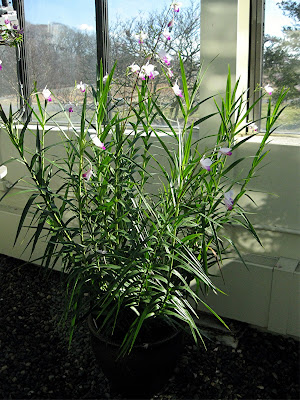 Still flowering in the Tropical House at the Bonsai and Penjing Museum. It's been flowering for so long I don't remember when it started. With the pot it's over 5 feet tall; it would be an attractive plant without the flowers so now....wow. It's an Asian, native from India and Nepal, through Southern China, and south into the Pacific.
Posted by ChrisU at 3:13 PM 0 comments 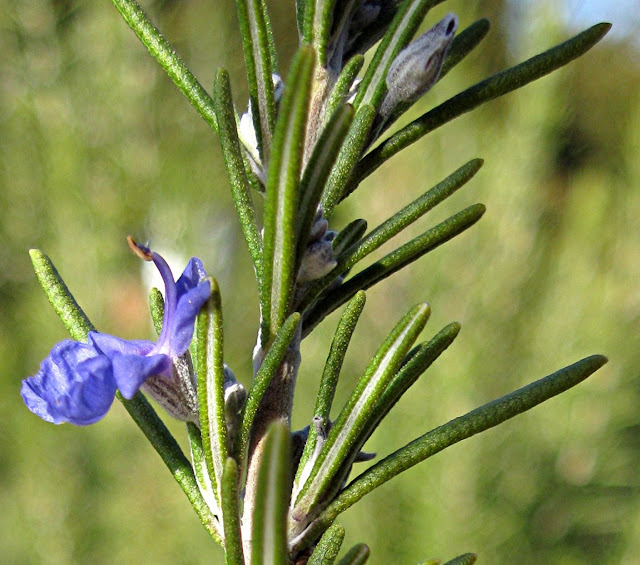 We're apparently going to have another little shot of winter with temperatures falling into the teens tonight and only getting into the mid thirties tomorrow. Another two or three days and it'll warm back up to "seasonable" temperatures which will be by then 43 for the high and 29 for the low.

Rosemary is an excellent evergreen shrub so long as you choose a hardy variety and site it so that it'll stay fairly dry in the winter.
Posted by ChrisU at 3:03 PM 0 comments 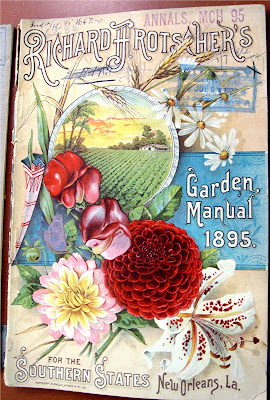 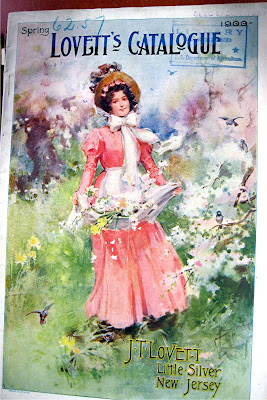 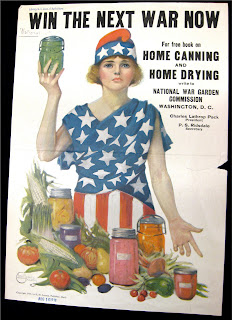 I went to the National Agricultural Library today; I'm going to help with a design for the space around their new sign on Route 1. Oddly, it's been almost exactly a year since I toured the facility with a coalition of my garden clubs. Weird. Or not. Susan Fugate, my contact for the design is in charge of Special Collections. This includes rare books, a collection of seed catalogs, art including an incredible collection of pomological watercolors originally done as scientific records, posters, et alia. I got another nice walk through and snapped a few pictures. The two colorful catalogs are over 100 years old and the poster dates from WW1.The poster resonated with me, not because we're at war, but because....well, everybody's growing vegetables! I wonder if the big pink jar is rhubarb? 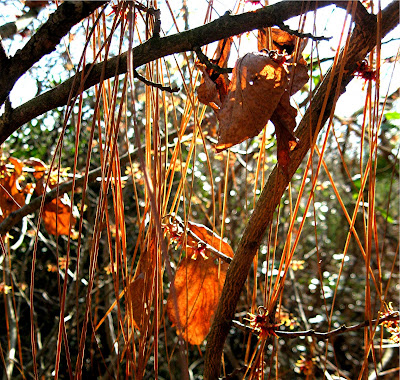 It's nice that often people call me when they see something interesting or beautiful enough that they want to share.The light shining through the Hamamelis flowers, leaves, and the Longleaf Pine needles was really beautiful. You can get a sense of if from this photograph but as always I fail at some level. Still, Joan had a full house of volunteers so lots of people were able to appreciate the curious vignette.

Today's project helped him move towards that goal. There were a good number of us on the project and we cut down a lot of interlopers, chopped them up, and transported them to the brickyard. I grabbed this picture because you can see, if you count the two in the mirror, four vehicles in a row: mine, Nate's in front, and the two reflections. We're all on our way to the Brickyard with branches or rounds (pieces of tree trunk).

When you look down Hickey Hill from the overlook, you see part of the DC skyline framed by tall pine trees. The opening is fairly narrow at the top of the hill and widens towards the bottom. Over the years deciduous trees seeded in along the edges and gradually grew into the opening. They both obscured the view, and interrupted the uniformity of the pine forest. Not so much anymore.
Posted by ChrisU at 4:45 PM 0 comments

Big project today on Hickey Hill involves a lot of tree cutting and removal...we reopened the view from the overlook The  first thing you do when you're going to cut down a big tree is discuss strategy. Two or three heads are better than one ; Pat talks with Nathan about felling a good sized Willow Oak. Our job, or more accurately Pat's and Ed's jobs were made easier today because we were removing trees growing along the margin of pine woodland. Attempting to grow towards the light, all the trees were leaning away from the pines into the clearing. It's much easier to drop a tree that's already leaning in the direction you want it to go! 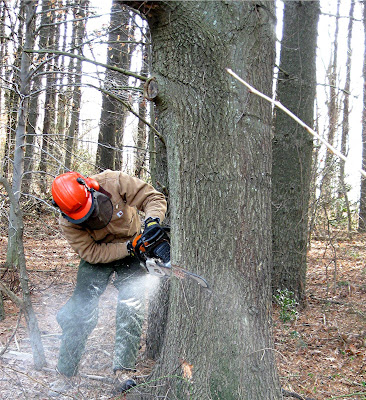 After deciding on a safe, practical, and practicable strategy, Pat began by cutting a notch, or face cut; there are a few different types/shapes of face cuts. I think he used a Humbolt notch.When the notch was finished, the back cut removed enough wood so that the tree tipped forward on the remaining wood (the hinge), the weight of the tree broke the hinge, and the tree fell just where it was supposed to. Note the large cleared area around the tree. It's important to be able to move freely without tripping or stumbling. A 45 degree angle to the back allows for a safe retreat when the tree begins to fall. It's halfway down in the picture below. 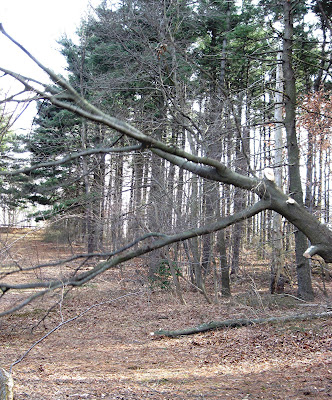 Cutting up a downed tree, or "bucking" is at least as dangerous as dropping the tree, again requiring strategy and safety consciousness. Pat "bucked" this one particularly efficiently and the rest of us loaded it up and drove the pieces to the brickyard where they will be turned to wood chips and ultimately to mulch. 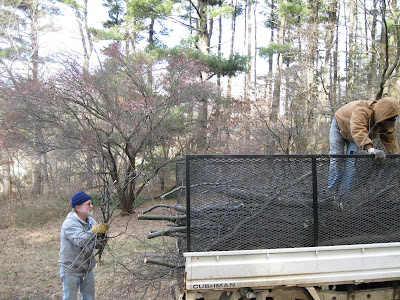 Amanda Schutte, the new China Valley Gardener, is in China on vacation 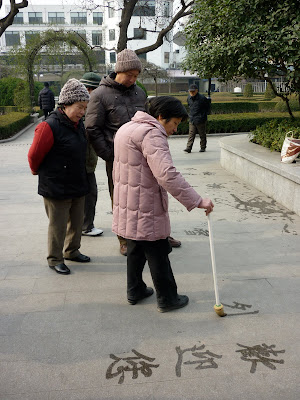 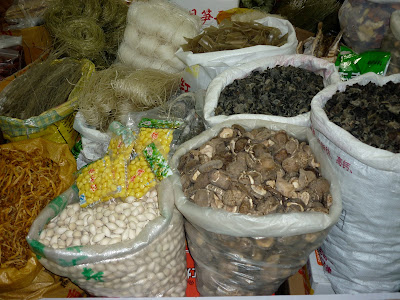 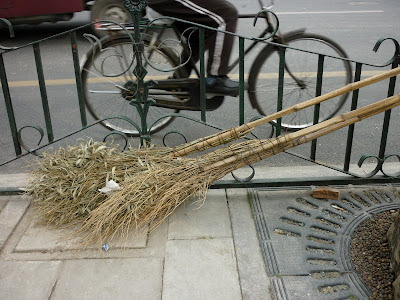 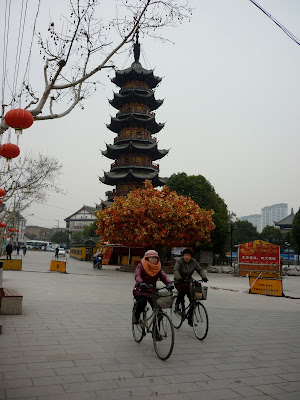 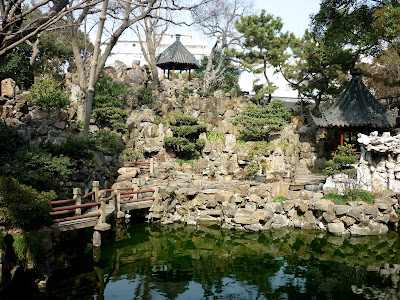 She tells me that she knows most of the plants, thanks to her tenure in the Asian Collections and that cut branches of Chimonanthus praecox are for sale everywhere. Ours, at the Arboretum, are exploding into full bloom now too.
Posted by ChrisU at 3:56 AM 0 comments

Polyhouse 7 is a cheerful place in the winter...if you come in the back way, you enter under this Calamondin standard, x Citrofortunella 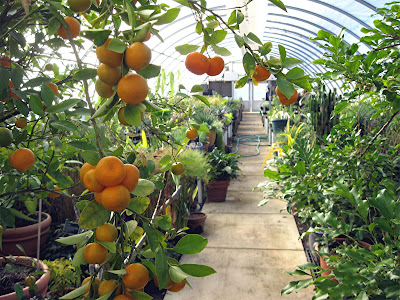 Since learning that a Lime tree may not be doable in the Florida garden, I have become more and more interested in Calamondins. I've know this plant all my life but had considered it to be just an interesting ornamental easily flowered and reliably fruited (often heavily) as a houseplant. All you needed was a south window with or possibly without summering outside. Conventional wisdom seemed to be that the fruits were too sour to be of much use, and I never questions it. At Behnke's we used to always make an effort to have a good supply for the Chinese New Year....often we sold several hundred in the weeks preceding.Possibly I should have gotten a clue, but no.

After a little research, I now know that the rest of the world considers this an extremely useful and tasty fruit. It is juiced, cooked into marmalade's and chutneys, added to drinks for flavor, eaten whole, and used for a variety of medicinal purposes. I suspect that the Lime I planted this summer in Florida, that looked so good at Christmas is now black and dead, a victim of  two nights of sub 20F temperatures. Later this year, I'll plant a Calamondin as a replacement, and happily anticipate future explorations of its gastronomic potential.
Posted by ChrisU at 3:29 PM 0 comments

Acer griseum in the island bed in the Asian Collections 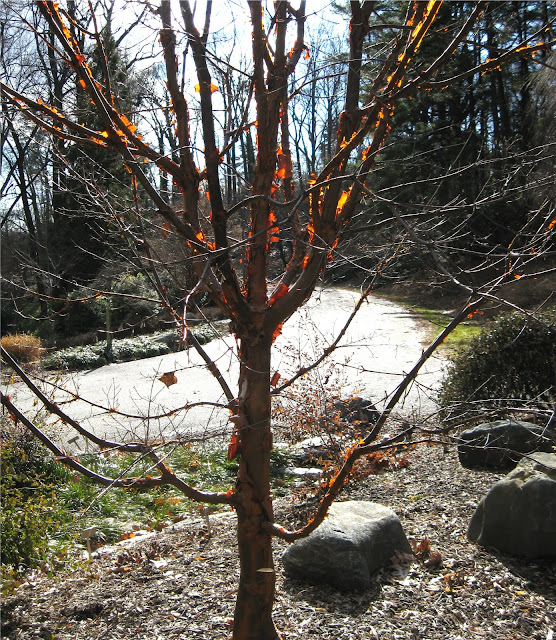 This is the only plant that I really intended to have in my garden and, after 25 years don't have. There just isn't a place. The afternoon sun  inflamed the exfoliated curls of reddish bark this afternoon. I remember when the "winter garden" was planted at Brookside Gardens. Acer g. was among the original plantings along with Chimonanthus praecox, a blue-caned Rubus, and I don't remember what else.
Posted by ChrisU at 2:49 PM 0 comments

Prunus mume 'Nishiki Ume', Flowering apricot.....we have a good collection of Umes at the Arboretum 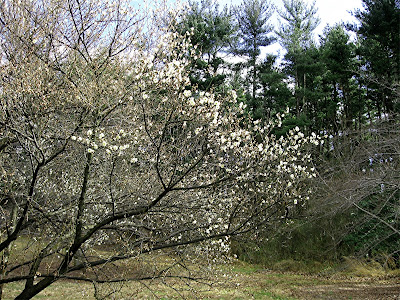 Prunus ume is a wonderful wonderful plant with subtly but strongly fragrant flowers in January, or at least February on a manageably small tree. Depending on the way the temperatures run in any given season, you can get a bit of bloom as early as December, a sprinkling of sparse flowers off and on in the winter, and finish up in early spring with a tree full of flowers. All this without the diseases and pests that typically plague member of the genus Prunus. Every garden ought to have one.
Posted by ChrisU at 2:38 PM 0 comments 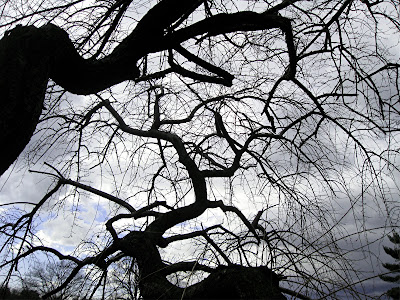 Today's weather was wild and woolly. Rain in the morning, sunshine midday, and a few cold showers just as I was going home. Sustained winds of 20-30 mph were interrupted by the occasional gust to 45 mph. When the overcast broke up mid-morning, the remaining clouds raced across the sky at a frightening speed. 61F is not only unseasonable for 6:00 in the morning in January, its warmer than it's been for....months? And it got warmer and warmer till mid-afternoon when the clouds darkened and huge ice-cold raindrops fell in bursts of a minute or two between long dry stretches. Odd day.

This Cherry is right on the road from the Administration Building to the Gotelli Collection. You come upon it as you move from an open meadow to Gotelli.
Posted by ChrisU at 2:20 PM 0 comments

Sedum rupestre 'Angelina'.....in a good location, that is, a bad location, this evergreen succulent flourishes to the point where it becomes a functional groundcover 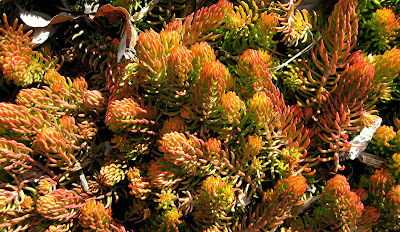 These greens and oranges are even more attractive than its bright yellow summer color! All you need is poor soil, heat, no water, and full sun. Brad was out cleaning, checking, and tidying and he took time to point out how beautiful this sedum was. It's growing near the Tram Kiosk in the Administration Building parking lot, and no doubt appreciates the extra heat that re-radiates from the asphalt surface in warm weather. I have used it for ground-cover in sunny containers and it overwinters nicely here in Zone 7.
Posted by ChrisU at 2:02 PM 0 comments