You Darkness by Eva Saulitis.
Posted by ChrisU at 3:06 AM 0 comments

Things change gradually but we notice them suddenly

My gardening life is going through changes. I'm not shopping for miatas or mistresses but things feel different than they did just a few years ago. I'm transitioning from installing a garden to finishing off and maintaining a garden. I did love the exuberant excitement and anticipation, even the feeling of power (I admit it Thomas), that went along with making beds, creating hardscape, installing new plantings...but much of that is finished now.

This past weekend the dogs and I spent a lot of time in the garden, my home garden that is. Where I used to see infinite possibilities I'm now looking at a somewhat confused actuality. The space has turned on its head over the past 27 years. Two tiny concrete stoops are covered with two large sunny decks that despite how they feel to me, aren't new anymore. Terracing (by hand with shovel and wheelbarrow) has totally reconfigured the topography of the back garden. Eight fairly large trees are gone, victims of storm or chainsaw. We had three removed (two dead, one too close to the house) since summer. Maybe that's whats prompting my introspection. It's getting a bit late in the game for me to be planting major trees. 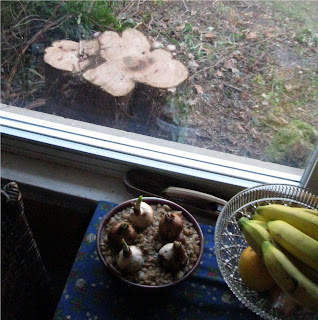 Not to worry; we still have plenty of trees. With two horticultural professionals in the house there's been no shortage of plants flowing into this garden and some of them were trees. Several times I essayed attempts at planning the garden on paper, prompted by an intellectual awareness that ultimately all this planting, when it came to fruition, ought to lead to a coherent conclusion.  In all  those attemps though, I failed miserably at confining the garden to paper and ink, so we forged ahead and the actual garden came out rather nicely. I expect because experience, experiment, and repetition are good teachers. Spending 27 here years has taught me some of the subtleties of light, drainage, and soil particular to this site.

So I'm thinking that now I'm in the "finishing" phase; the earth moving has been done, excepting the large (~80 x 75 foot) compost area at the back of the property which I will leave to the next generation. Beds have been created. Woody plants are in place and and many have begun to approach mature sizes. Slow colonizing perennials and bulbs have been in the ground long enough to establish themselves.Still there's work to do but it's a different kind of work; it's maintenance. It was exciting planting small trees that I knew would eventually overtop the house but it's also satisfying to tend plants you've already planted. Pruning, deadheading, occasional fertilizing, hand watering during droughts are all enjoyable tasks that allow me to be part of the garden.
Posted by ChrisU at 3:22 PM 0 comments 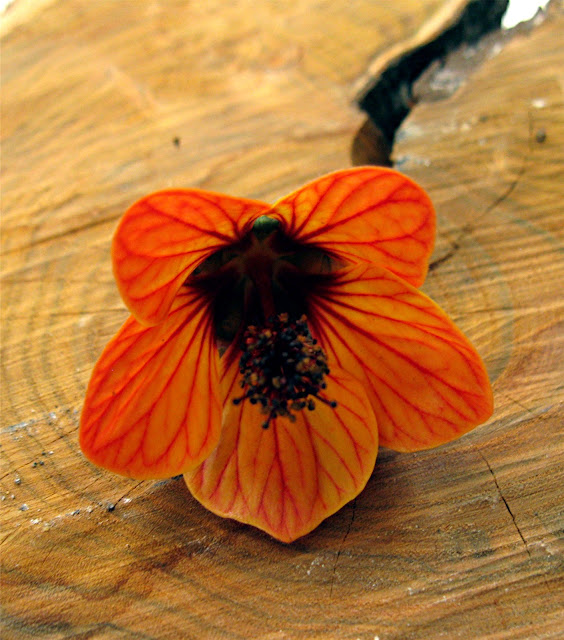 People bring odd things to the large table in the headhouse where we eat lunch. I liked the veins in both the flower and the wood. 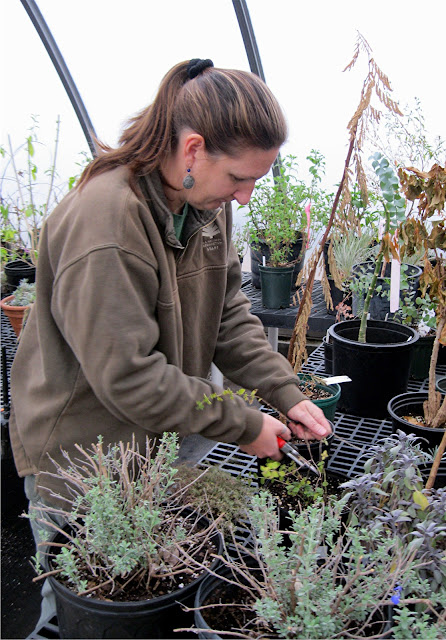 The roundhouses are covered and the tropical containers are inside for the winter. The salvia and lavender cuttings have been taken, and Brad has potted up the tropicals that spent the summer planted in beds. As a group we've cut back a lot of perennials and moved a lot of leaves. We'll move a lot more over the next three weeks or so and by the last week of December the gardens will be pretty much ready for winter. I'm sure I speak for the rest of the horticulturists/gardeners when I say we prefer being in the garden to being in the office. Today was cold and rainy and despite making a few forays into the collection I spent most of the day uploading, labeling, and editing photographs: good practice for the next few months. The rain stopped and tomorrow the sun will shine and it'll be warmer,. I'll get back to moving leaves and cutting back perennials. ..
Posted by ChrisU at 3:53 PM 0 comments

Something happened Saturday....but the sunrise was beautiful this morning 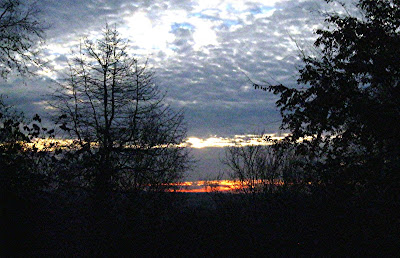 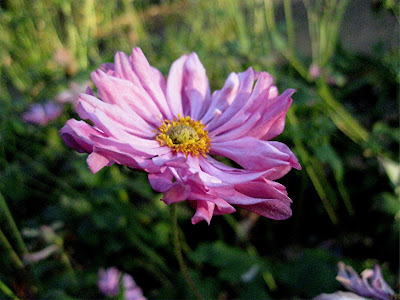 A big wind blew, the rest of the leaves fell, and everything changed. We went from mid-fall to late-fall. Look down at the pictures from Wednesday. There's rich color and lots of it. Now the situation is bleak. There are still jewels here and there like this anemone flower. Two weeks ago this was part of a 100 foot drift and one of thousands of flowers. Now it has a few companions but not more than a dozen. It's okay....this is the order of things. Winter is coming but then spring will come. And the camellias defy winter.
Posted by ChrisU at 2:34 PM 2 comments

What won't they think of next?
Posted by ChrisU at 5:26 AM 0 comments