It's tough getting old; I think my testosterone levels are okay...my cupidity is failing though 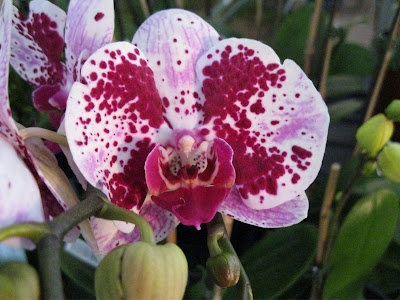 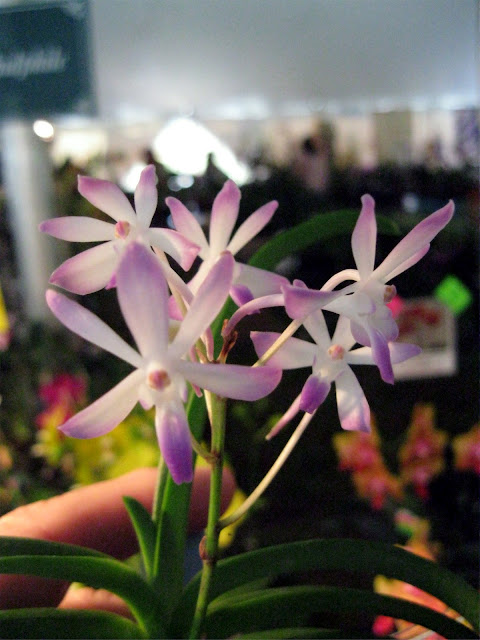 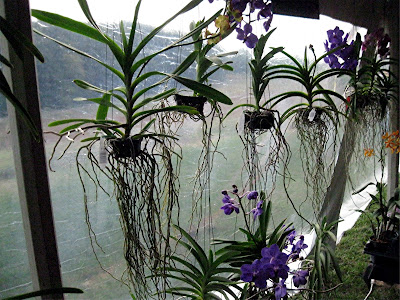 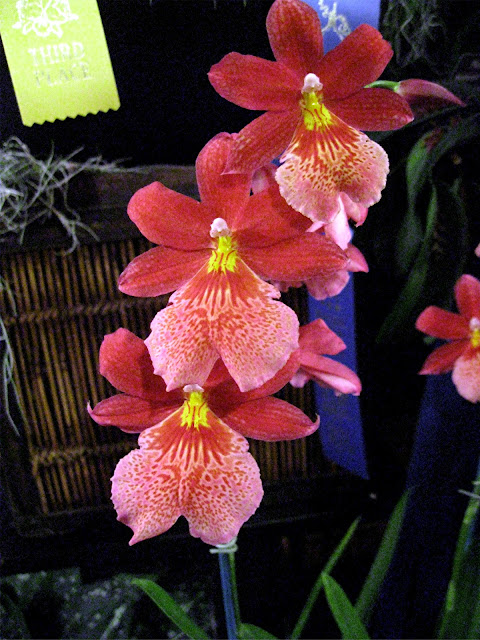 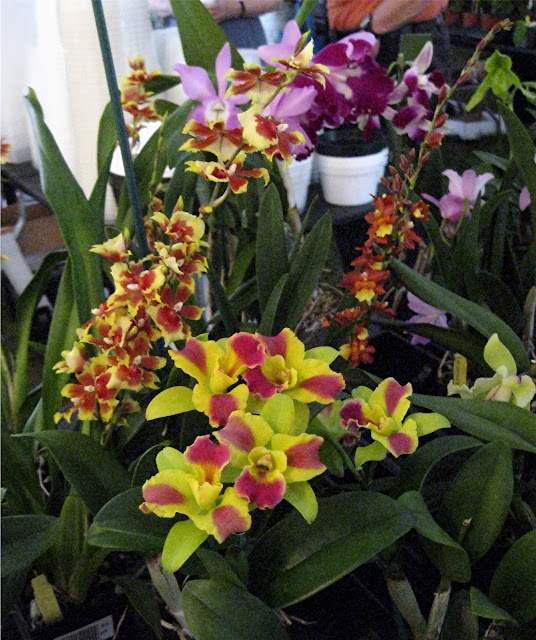 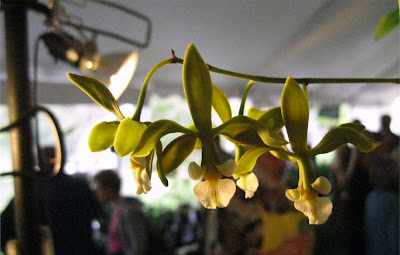 Not stupidity, I'm still doing fine with that. I just don't have the same drive to acquire that I used to have. I still love pretty much all plants.. Pat asked me yesterday at lunch if I was planning on walking through the Orchid Tent. Every Columbus Day weekend, the NCOS, National Capital Orchid Society, has a show and sale. I did. Karen and I went today and I didn't buy anything. The plants were beautiful; I think there were significantly more flowers than usual. I was just happy to look at them.
Posted by ChrisU at 12:31 PM 1 comments 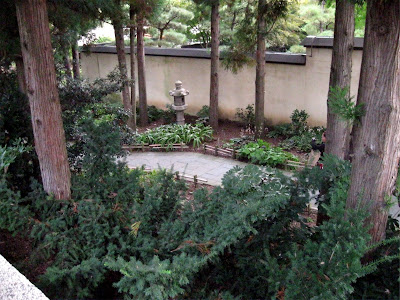 I don't remember if it was 5 years ago, but there was a project here that included "limbing up" the cryptomerias. Aarin and I were responsible for the severity of the pruning. Our choices were not universally popular at the time but I think, in retrospect, we did the right thing. There is more light for the ground level perennials, and certainly this view down from the east terrace of the Administration Building is wonderful.
Posted by ChrisU at 12:04 PM 2 comments 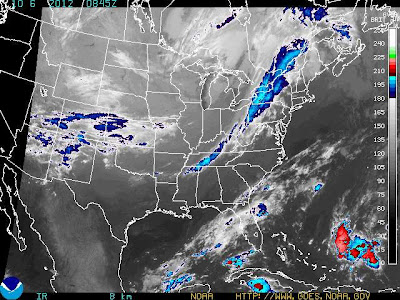 The National Weather Service has forecast an 80% likelihood of rain in Washington DC this Sunday. They're right; it's going to rain hereabouts. It's just not going to rain at the Arboretum or in Adelphi.

To look at that front moving east, you'd think that in the city, we'd be expecting some rain. "Expecting" would be the key word. That front stretches from Mississippi to Canada. No matter. We won't be getting it. You can see where it's beginning to break up at the western edge of West Virginia. I wish I had the radar from yesterday before that break began to appear.

It's not as though it'll end up being a big opening. Typically areas 20 miles north of us get heavy rain; the same 30 miles south. Often, as the front passes the city and approaches the open waters of Chesapeake Bay and the lower Potomac River, the moisture generates precipitation, even thunderstorms, so that the rain has, in essence, opened a gap for Washington and then reformed 20 miles to the east, as soon as it gets past the city! My friend Pat has suggested the culprit is a "heat island effect" related to the fact that Washington DC is a gateway to Hell. I think it has more to do with the specific topography of the Appalachians but it's still tantalizingly frustrating. Agghh!!!

We go through this scenario many many times every summer. I ougha learn but there's always a little ray of hope
Posted by ChrisU at 2:56 AM 1 comments 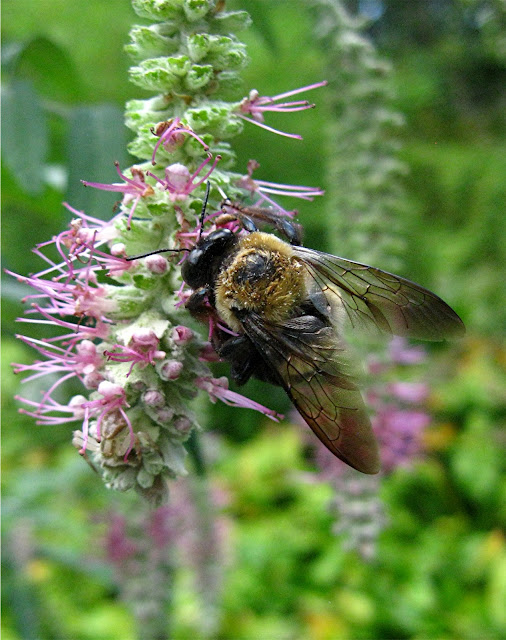 This box turtle can't be stopped 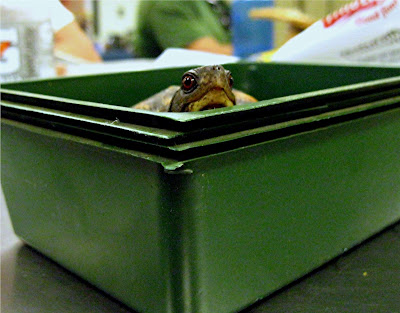 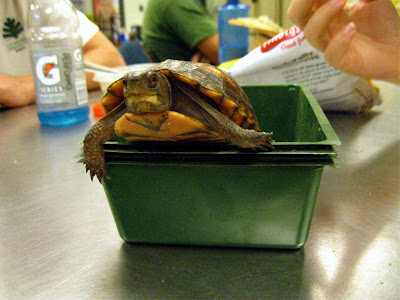 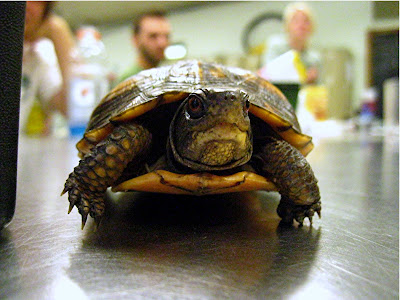 I was terrified. Well not really, but we were all afraid he's fall off the table. He just kept coming and coming and coming. And always pointed east. He seemed to know where he'd come from. Pat took him back the the Holly Magnolia Collection after lunch.
Posted by ChrisU at 3:03 PM 1 comments

It's a little bit coarse, the plant not the flowers, but I like it. This is one of the group that the volunteers transplanted this summer.
Posted by ChrisU at 3:13 PM 0 comments 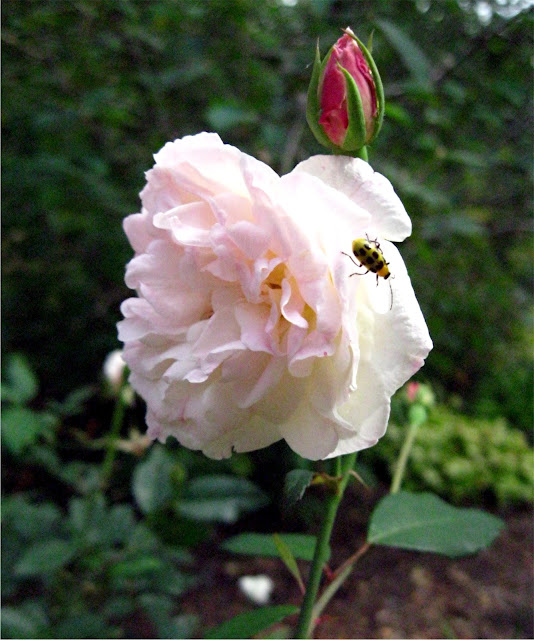 This rose is blooming its head off right now by the GCA Circle. About 30 feet away 'Hume's Blush' is flowering almost as heavily. These roses are very similar in appearance. My new friends at Rose Petals Nursery in Florida claim they're the same rose. I'm not a sophisticated enough rosarian to have an opinion, but I'll check with Stefan. Anyway, they're both clean, flowering, and fragrant.
Posted by ChrisU at 3:02 PM 0 comments

Fall is for grasses....these two are North American natives 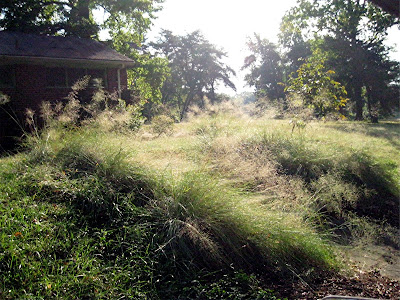 You almost had to be there...Fall is here and flowering grasses are one of the best things about fall. I remember many many years ago when I realized that I was going ot have to stop using invasive non-natives like miscanthus how upset I was. No matter; now there are any number of native or near native grasses to choose from.
Posted by ChrisU at 2:55 PM 0 comments