I can't really blame her; it's beautiful out there 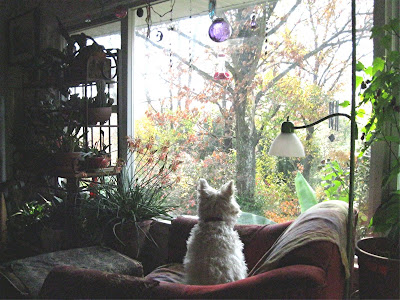 Jingles has taken my chair, but it's really too nice a day to read anyway. I'll go out and putter in the garden.
Posted by ChrisU at 7:36 AM 1 comments 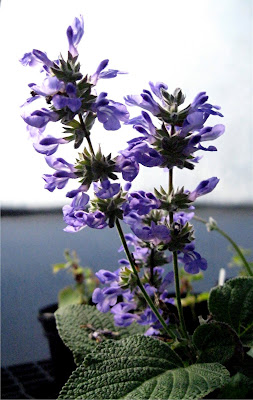 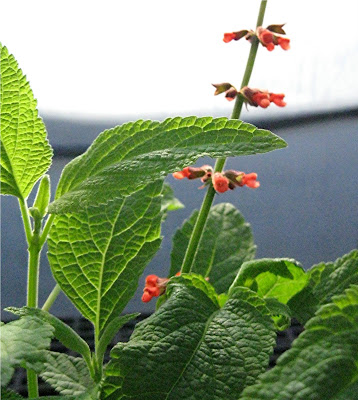 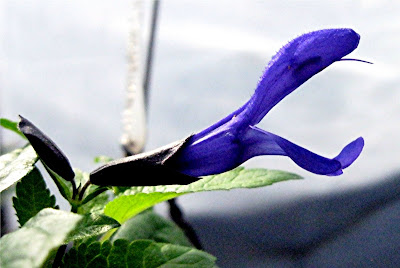 I've been admiring the Herb Garden Salvia in the greenhouse again, and their sporadic bursts of fall flowers.
Posted by ChrisU at 5:10 AM 0 comments

Metapanax delavayi in the greenhouse 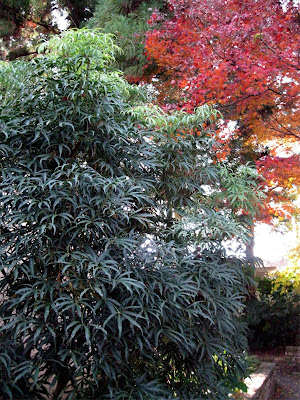 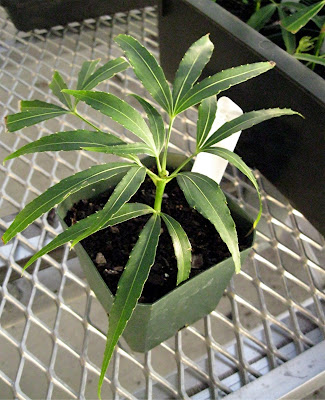 We know it's happy here in an enclosed courtyard; now we need to get it out into the open garden.
Posted by ChrisU at 5:06 AM 0 comments 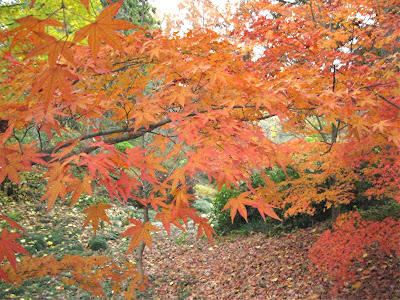 These smallish trees are visible from the road if you look down over the GCA Circle and to the right. The foliage is stunning.
Posted by ChrisU at 4:16 PM 0 comments

The Herbarium echoes.....Now I know how the cats felt 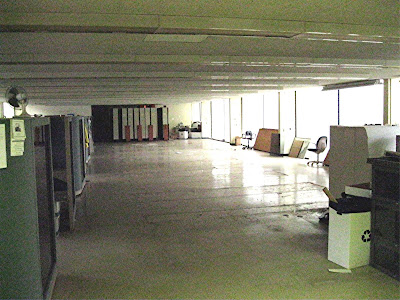 Apparently cats don't like bouncing around in empty spaces....or probably change in general. That makes cats conservatives? I guess I always suspected that. We'll just have to agree to disagree, the cats and I..

When I was in High School I worked for a moving company owned by a friend's family. Friendly when we arrived in the morning, as the day passed and their houses emptied of furniture, cats panicked. Dogs didn't care; their complacent trust allowed them to calmly watch as we stripped their houses and loaded their owner's possessions into a truck. But the cats....oh my. By the time the van was loaded they were distraught and weren't consoled a bit by being unloaded into the new empty house. Being locked in an empty room as they usually were, didn't help. I'm sure things got better after a while but l always dreaded arriving at a job, finding cats, and knowing by the end of the day they would be miserable
.
Posted by ChrisU at 3:40 PM 0 comments 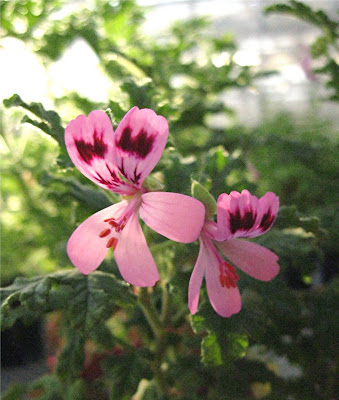 Here's the thing....I have to check a few of our plans in Greenhouse 7 so I see the scented geraniums at least once a day. This one has been flowering all week. Imagine my surprise to find it's named 'Wildwood'; Wildwood, Florida is the location of the Florida garden. God is saving code again.
Posted by ChrisU at 3:35 PM 0 comments

Cotinus obovatus: these are the fruit of our collections in Tennessee 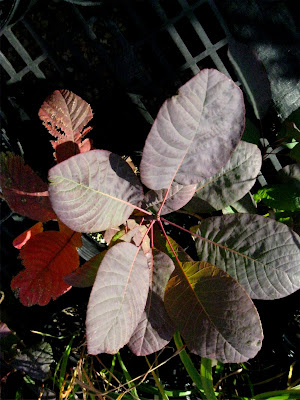 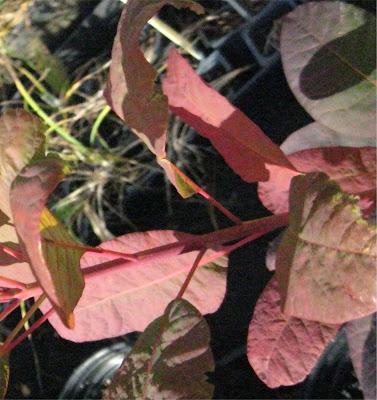 Actually, I guess they were grown from the fruits we collected, Joan, Amy, and I. I was walking past one of the Fern Valley cold frames this afternoon and noticed them. While most mature Cotinus have shed their leaves already, these were looking good. I truly like this plant and feel like it does have a future in gardens.

The seed germinated, after an acid pre-treatment, about a year ago and by this time next year these plants will be ready to be planted out.
Posted by ChrisU at 2:39 PM 0 comments 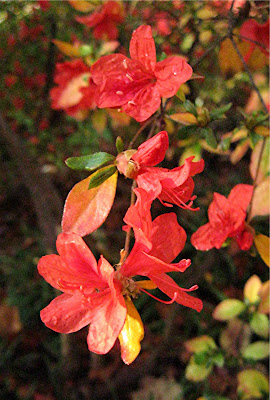 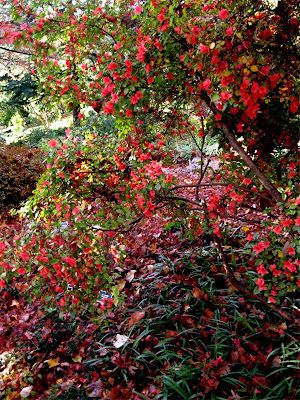 These always rebloom a little bit, not always this heavily. It's a good color for the fall.
Posted by ChrisU at 2:32 PM 0 comments 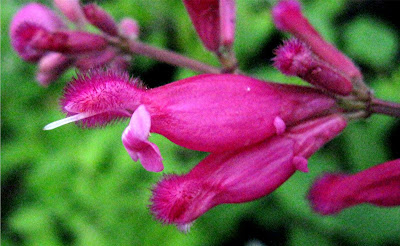 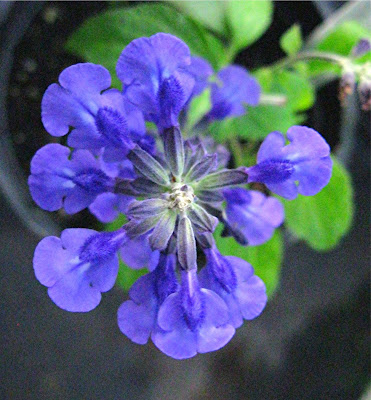 In the middle of a gloriously colorful fall, this single leaf caught my attention in the greenhouse 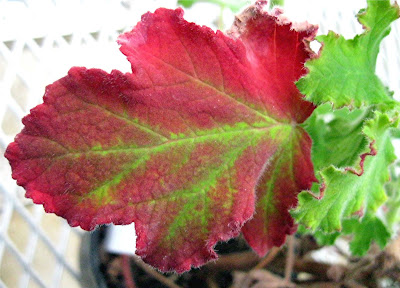 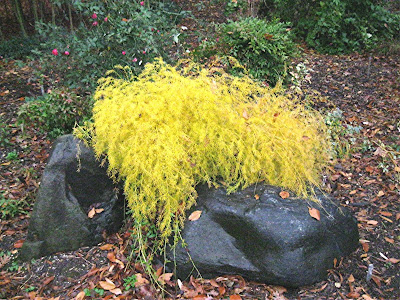 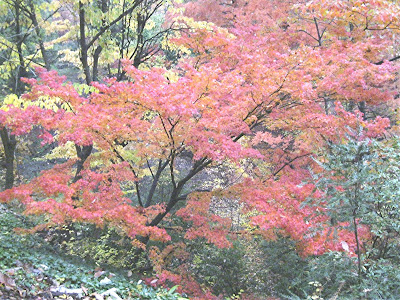 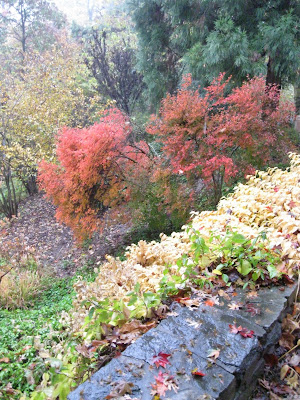 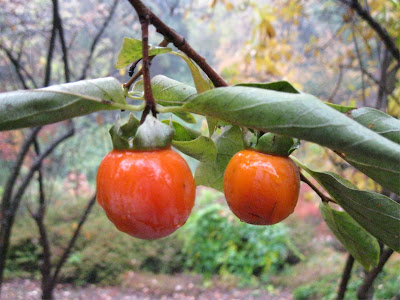 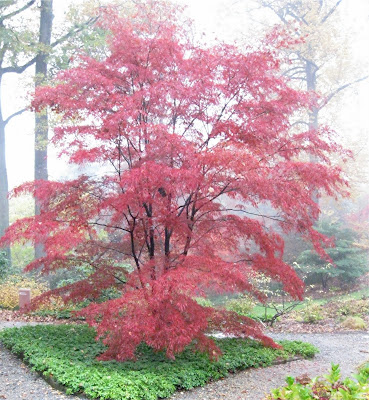 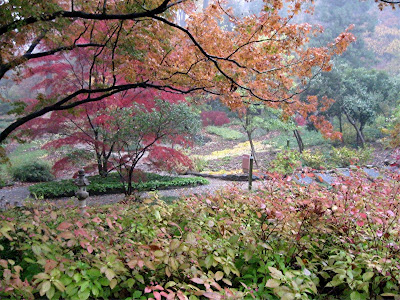 How about an ornamental Asparagus (Asparagus cochinchinensis) for fall color (in the top picture)? The Persimmons are pretty but not yet tasty.

There's a lot to do: pruning, transplanting, removals,.... Still the garden is beautiful.
Posted by ChrisU at 2:36 PM 0 comments 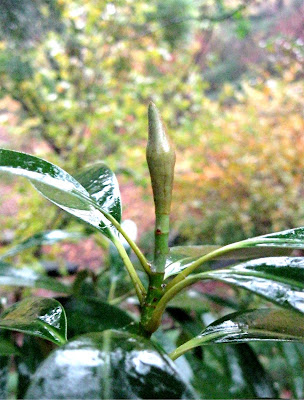 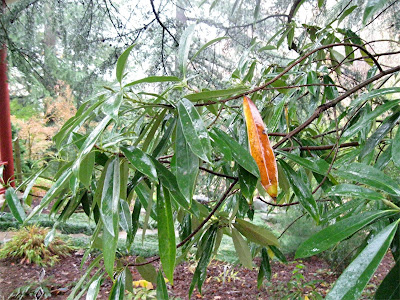 This plant has been here more than 20 years and it's more than 20 feet (6 m.) tall. . I don't remember seeing flowers on it last year, but I'm old and could have missed them or forgotten. Probably not. I'll watch these buds through the winter. We have another species, M. yuyianensis, farther down China Valley; those plants are also budded.
Posted by ChrisU at 2:22 PM 0 comments 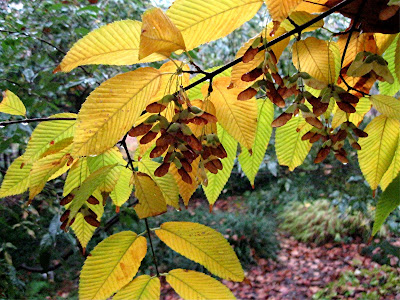 This is a nice little plant, well, maybe not little...medium sized. This plant was grown from seeds collected in 1982 in Japan; it's 20 feet tall give or take. The leaves definitely resembling those of Carpinus look odd on a Maple.
Posted by ChrisU at 1:47 PM 0 comments

It's my blog and if I want to post pictures of my garden, I can. 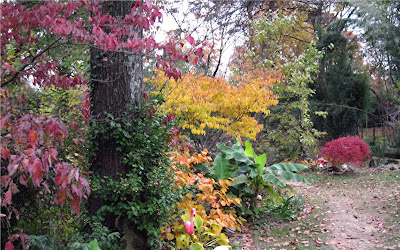 This is probably the last one this fall. It's supposed to rain tonight and tomorrow and the insane colors will disappear as the leaves drift tot he ground. I still like the effect of the unfrosted bananas amidst the maelstrom of fall color.
Posted by ChrisU at 2:52 PM 1 comments

Fall foliage color is one reason we like Acer Henryi 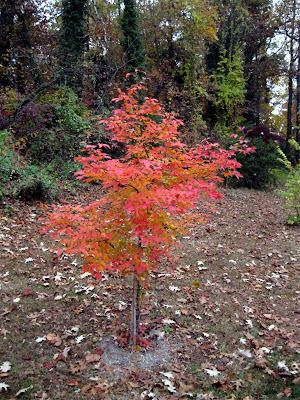 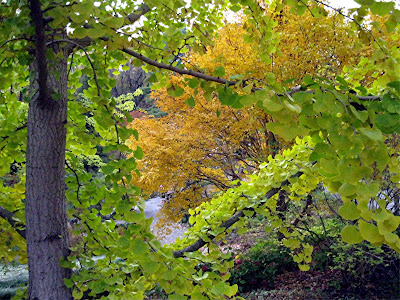 This is a beautiful trifoliate Chinese Maple. It puts me in mind of our native Boxelder, Acer negundo. Chalky white branches define the form of the tree. Beautiful pendant racemes bear attractive flowers that produce beautifully arrayed samaras. It's a fairly fast growing maple; it can hold its own with Silver Maples and Boxelders, and it seems to recover from injury well. A specimen in China Valley grown from seed collected on the 1980 Sino-American Botanical Expedition, as a mature tree, lost nearly half of its top growth when a large Cedar fell on it. You can't detect the damage now.

We seem to have two forms: the SABE plant has golden fall foliage whereas the plant in the top picture, grown from seed collected in Shanxi in 2002 (Carole's trip) has...well look at that foliage! The red pigmentation shows itself also in new leaves and wings of the samaras. Chris Carley brought back seed from the most recent NACPEC trip and though the plants are less than two years old they seem to exhibit the attractive red pigmentation.
Posted by ChrisU at 2:08 PM 0 comments

Moving day approaches; that's a lot of boxes to fill 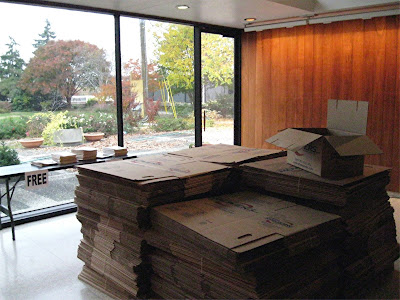 Actually it's this Saturday. Firm. Carole and Chris have been ordering furniture for the cubicles in the trailer; the measurements (of the cubicles) keep getting smaller and smaller. I'll be, I'm sure, the only person going into a larger spac than they occupy now! Everyone is worried but I'm sure it'll be fine. Close quarters will force us into our best behavior.
Posted by ChrisU at 1:58 PM 0 comments