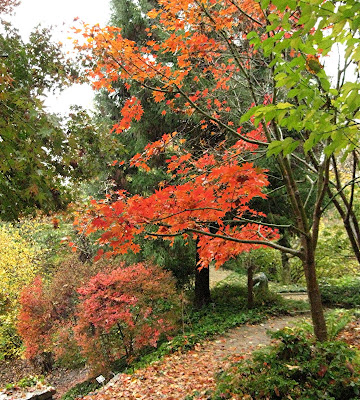 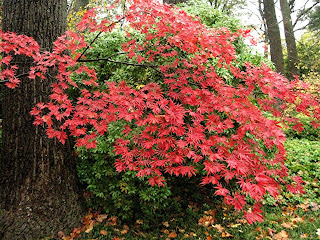 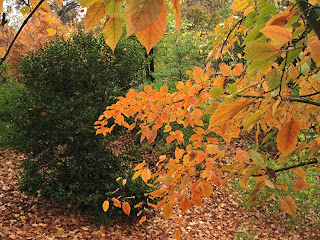 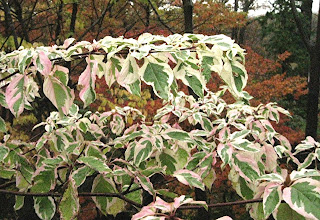 Fall has taken a turn towards the bleak. A cold steady two-day rain and 20-30 mile per hour winds today have finished stripping most of the leaves from the canopy. Of course, there are still Oak leaves, and many of the understory trees are pretty leafy, but we must be approaching 60+% defoliation. For much of the seson the weather has been warm and friendly, the colors bright and cheerful, but not so much lately. Still, that's what fall is about and eventually it'll be winter. While the predominant colors are umbers, ochers, and russets, there are still some clear oranges, reds, and the odd buttery yellow. In some way, rain, fog, and gloom serve to heighten the impact of the lingering specimens.

The top picture is Acer ceriferum, an obscure Chines Maple that I've had no prior experience with; nice orange foliage. Trompenberg is an old standby in the trade....go figure. We have a number of different Acer davidii; this one has an especially nice display of fall color that is significantly later than most of the others (many of whom are mostly defoliated now). Cornus controversa 'Variegata' is a tree that is beloved around the world in zones 6-7-8. In the fall a pink overlay infused the creamy variegation of the leaves.
Posted by ChrisU at 2:45 PM 0 comments

Cyclamen coum 'Something Magic' This one cames from Terra Nova, allegedly the first tissue cultured Coum 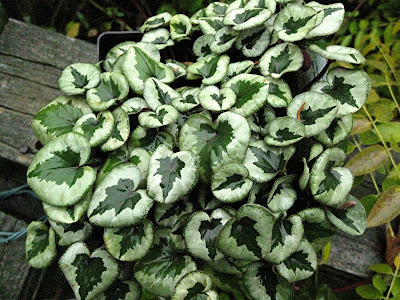 They certainly picked a beautiful form to produce. It is one of the "Christmas Tree" types (the green interior of the leaf vaguely resembles a Christmas tree). Karen and the boys snagged it while they were picking up plants for an installation job. That's an occupational hazard, spending so much time at Garden Centers. I'm glad they picked it up, its a beautiful little plant.

For us, C. coum flowers in the spring, or at least late in the winter. The other hardy Cyclamen commonly grown in the Washington area is Cyclamen hederifolium. Both leaf out this time of year, but hederifolium begins flowering as it leafs out; we have dozens of flowers on various plants now.
Posted by ChrisU at 1:23 PM 0 comments 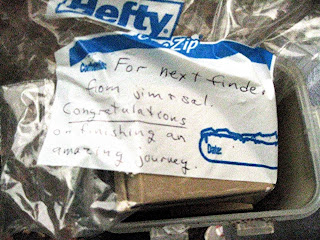 Nate, Neal, Alice, and I did some more peripheral reclamation (I'm going to stay with this euphemism, it's explanatory and implies neither culpability nor previous neglect) and while we mostly encountered Asian Viburnums, Mulberries, and three truckloads of Greenbrier (Smiliax), we also found a few small interesting things.

Apparently there was some sort of contest, rally, game? a few weeks back with clues, riddles, etc, the obect of which was to end up on the top of Hickey Hill. I remember seeing one group of people being photographed and heard some nebulous rumors. Well today Alice found a waterproof box that contained a pad and pencil to be used by the successful to record their presence. It seems only only four groups made it. Apparently it is traditional to leave a small gift/prize for whomever arrives after you. We found a Teddy Bear stamp??!! After examining the contents of the box we replaced it though I don't expect there will be any more finishers.

We found a number of colonies, including hundreds of individual plants, of Chimzphila maculata, Pipsissewa, a lovely little evergreen native in the Pyrolaceae (subsumed in current taxonomy, into the Ericacee). They are charming little plants, and I agree with Michael that they would be excellent subects for Young to include in her Kusamono.
Posted by ChrisU at 5:54 PM 2 comments

Stachyurus praecox var. Matsuzakii....I love this plant, I just can't take a picture of it that shows what I want to show! 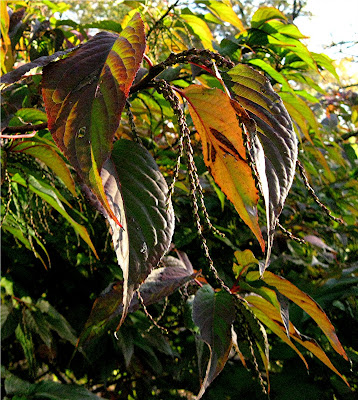 I saw my first Stachyurus when I first worked in the Asian Collections 17 years ago. I was floored. The plants are spectacular in late winter when the buds on the pendulous racemes swell and an entire large shrub is covered with vertical strings of green pearls. I took the lesson with me and, I put some number of these relatively unknown plants into....well a lot of my commercial landscapes. It is a striking plant in winter as the buds swell and through spring when the flowers open.

This particular plant (which lives across from the Asian Parking Lot) has good fall color s a bonus.
Posted by ChrisU at 2:46 PM 0 comments

Salix chaenomeloides....what can I say? i've always liked this plant 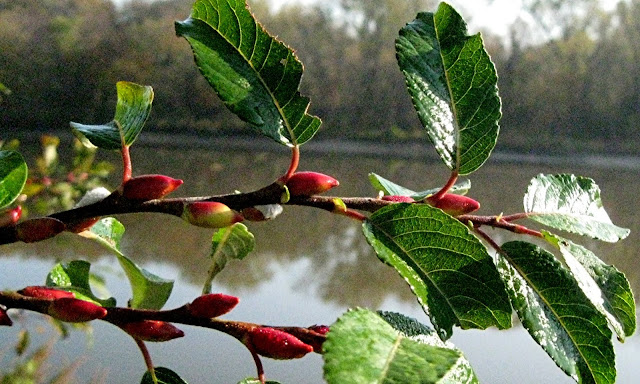 I used to have hope that it would someday enter the florist industry as a cut stem for winter. The red buds are over a half inch long. When the catkins expand they are quite impressive, frequently two or more inches long. Easily grown, it doesn't seem to be invasive, and you can coppice it for profit. Still, no one seems to have run with it.

This plant is growing beside the Anacostia River.I posted it last winter but had to fight my way through vines to get to the plant. We had a cleanup project this summer and three people sweated and bled for several hours to free this plant; Amanda, and I think Jeanette, but I don't remember the third person. I'm sorry I forgot, but grateful they did the dirty work. We (read mostly Nathan) have been staying on top of the area with a bit of weeding, a bit of spraying, and a bit of mowing. At least for the short term things look good.
Posted by ChrisU at 2:21 PM 0 comments

Dawn Redwood...fall color in the morning sun at the south entrance to the Bonsai Penjing Museum 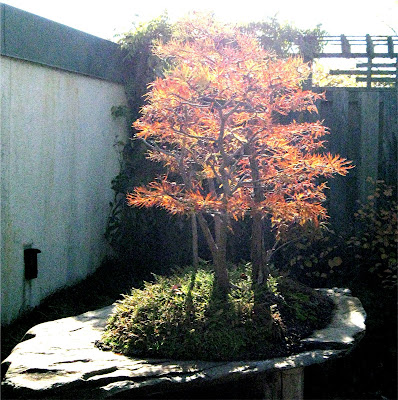 One of the bonuses of spending a whole day in one place is that, as the sun arcs through the sky you get to see the varying effects of different angles of sunlight. These trees were beautiful all day, but stunning in the morning when the sun first crept over the wall and ignited them with the background still in deep shade.

I worked in the Bonsai/Penjing Museum again this weekend and for the first time felt as though I had some grasp of which plants needed water and which didn't. Heretofore I haven't really felt that any of them were dry (actually, they weren't) but this time some definitely were. I like to water plants that are ready for water; conversely I am made very uncomfortable when I'm assigned to water a large number of plants and none of them need water. Curiously many of the dry plants were pines; the last few times I watered I don't think I watered any of the pines. Sometimes I find it helpful to think of water as a chemical, toxic to plants, that they nonetheless require in certain quantities. But I'm a bit odd.

I was the weekend waterer in the Greenhouse complex (and the Herb Garden), but didn't have a lot to do there.  Tony watered yesterday and he is meticulous, scrupulous, and thorough.
Posted by ChrisU at 3:06 PM 0 comments