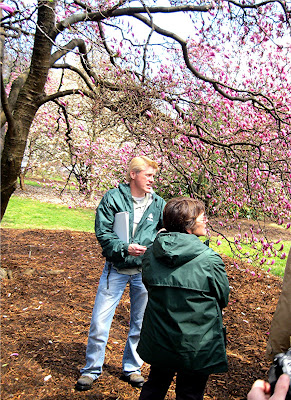 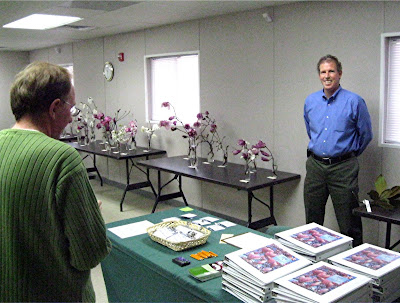 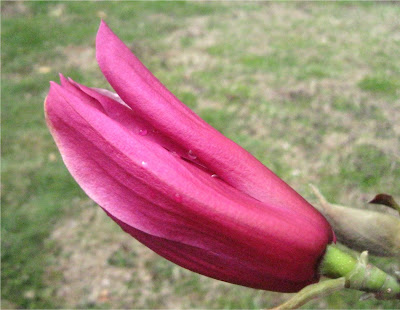 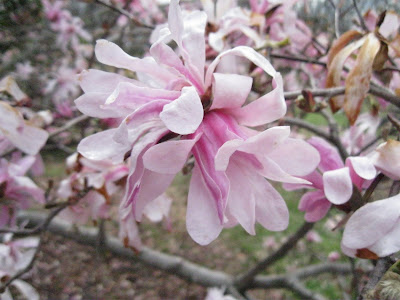 After a week of frantic, well intense anyway, preparation we had the Magnolia Study Day. Despite a slow start to registration we ended up with a full roster (plus 1?). Andrew Bunting is the new president of the Magnolia Society International, and spoke about magnolias in the landscape. He grouped cultivars by their relationships and his survey included both classic and brand new selections.

Mostly we were local though we had one attendee from way upstate New York, just a few miles from the US/Canada border. It was interesting to learn from him that they grow far more of the yellow Magnolia acuminata hybrids than we do. Because they're hardier obviously. Gordon Hagen came from Thurmont, Maryland where his collection, by his own estimate, consists of somewhere from 300 to 400 plants. Chris Carley had invited attendees to bring samples either of interest or for identification and Gordon brought a number of interesting branches. Janet Draper brough a branch of an unknown Michelia type from her garden at the Smithsonian. Andrew picture messaged it to Dick Figlar who is the preeminent magnolia expert in this country. He identified it as Magnolia cavaliete macropetala. That process was one of the coolest things I've seen in a good while.

After lunch we toured the collection which was exciting. The sun hadn't been out since Monday but it did make a brief appearance in the morning. At lunch we heard reports of hail. And wonder of wonders, while it was sunny for the bulk of the tour, the sky blackened and we were hit with some kind of solid precipitation just as we returned to our cars ofter seeing almost 100 taxa of magnolias.

Thanks to the diverse and knowledgeable group we heard some interesting anecdotes. For example we found out that Magnolia x kewensis 'Wada's Memory' was named for a Japanese nurseryman who collected seed from the hybrid that occurs where the ranges of Magnolia kobus and M. salicifolia overlap. The story goes that the cultivar, named at the Washington Park Arboretum in 1959, was intended to honor K. Wada posthumously. It turned out he wasn't actually dead and at some point actually visited the plant. Good stuff!

I feel that the format really worked and would be well applied both to other formal collections and even other taxa that we have good collections of. One of our exit survey questions was "what other collections would you like to see present study days?" I didn't fill out a survey but I'm voting for camellias and Dr. Ackerman.
Posted by ChrisU at 3:56 PM 1 comments

It's been slow going pulling out of the dry season, but that's going to make the monthly total look a lot better! I'm going to have the best weeds by the time we get down in May. The real plants will be good underneath them though. And we have gift tickets to Bok Tower: a good garden and a "Florida scrub" trail.
Posted by ChrisU at 2:35 AM 0 comments 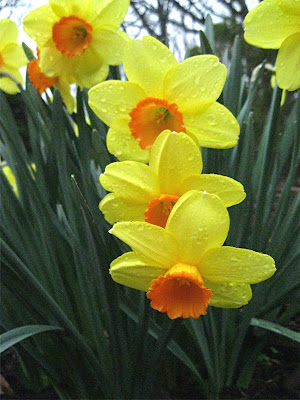 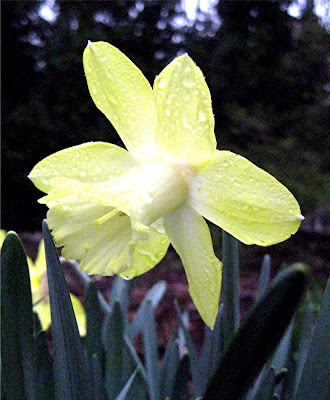 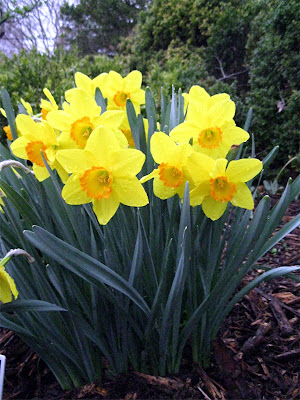 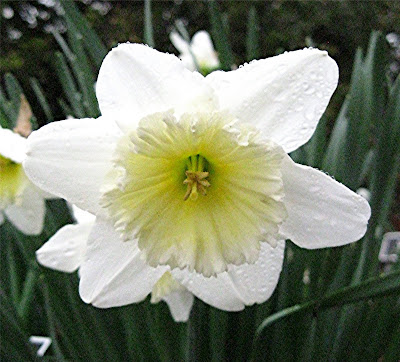 I walked through the Daffodil Collection today. The day was gloomy so the light wasn't great but many of the clumps looked wonderful. We're having such a cool spring that sequentiality of bloom will be the order of the day. While the cultivars were fully opened, there were other varieties that hadn't even begun to flower. That's good because it means there'll be something good going on for the next few weekends.
Posted by ChrisU at 3:18 PM 0 comments

Hey it's not me, it's the plants that are in such a hurry for spring, I can wait forever 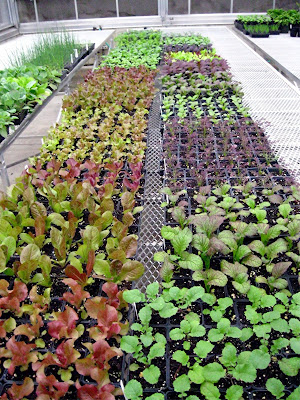 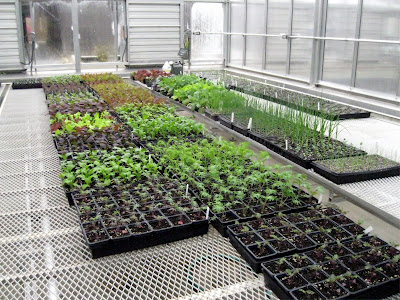 They're covering the benches, filling the aisles, and gathering at the greenhouse doors. Many of these Youth Garden greens only have a week or so to go in their containers. I don't mind these cold nights and grey rainy days. I'm fine with daytime temperatures in the low 40's F. It's those plants doing all that complaining. They can't wait to get their roots into the ground. I swear it's okay with me if it stays cold till June......well....not really.
Posted by ChrisU at 3:06 PM 1 comments 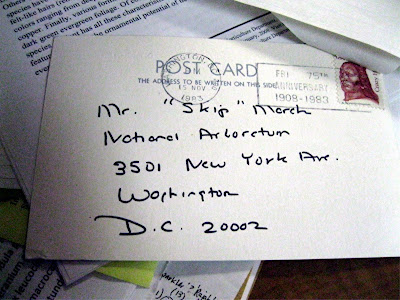 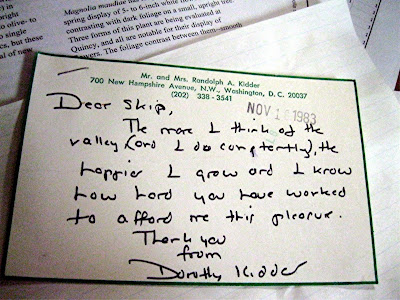 Apparently Ruth Dix (retired USNA shrub breeding) was going through some papers and this old postcard turned up. She sent it to Carole Bordelon who passed it on to me. I love it because it shows how thoughtful a person she was. I don't know exactly what she's talking about but suspect it has to do with either the inception of China Valley or the installation of the watercourse in the Central Valley. Skip was apparently administrating a project funded by Dorothy. She not only donated generously in her lifetime to the Asian Collections, but showed a deep and constant interest in the gardens, visiting regularly often with friends and always with her miniature dachshund. Posthumously, a foundation she endowed donated annually enough money to allow for the funding of three positions including Nathan's and Amanda's. Of course we now know that foundation has chosen to direct their giving elsewhere precipitating something of a funding crisis for us. I was glad to see this note and be reminded of just how generous and considerate Dorothy had been.

Times definitely change. Can you imagine anyone mailing a postcard with their phone number on it now?!?
Posted by ChrisU at 2:35 PM 0 comments

Vibutnum sympodiale: I've always been fond of this plant with it's large flowers so early in the year 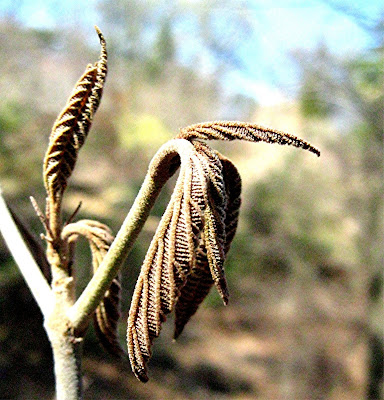 But you know what? Those leaves just unfurling are pretty nice too. I've been reading about Magnolia classification and it turns out that one of the characters of some use is "vernation" which is not a misspelling of veination, but a technical term referring to the way leaves are arranged in a bud, and by implication, the way that they unfurl. Anyway, it will take a bit of dissection on my part to determine the type of vernation here, but whatever it is, it's damned attractive. (maybe involute?)
Posted by ChrisU at 4:31 PM 0 comments 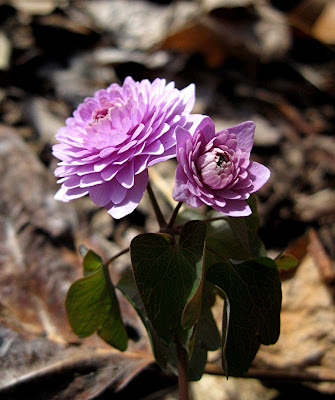 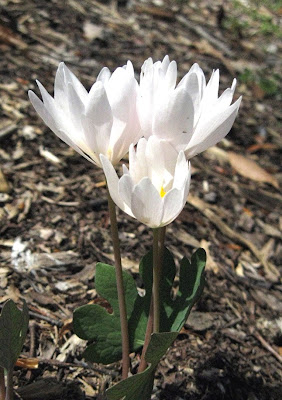 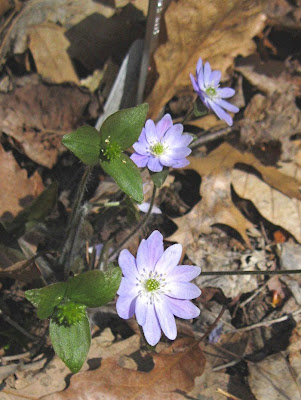 Guess which one of these plants hasn't had a name change recently. You can't go by the names in the post title because I couldn't make myself type "Anemone" for "Hepatica", oops, I gave one away. Anyway, it's hard enough to keep up with the specific epithets for hepaticas, now the genus is changed. It does look like an anemone though. Except for the non'anemoneish leaves. So Hepatica becomes Anemone, and Anomonella becomes Thalictrum....Sanguinaria remains unchanged for the time being. Aghhhhh.

They're not big but they are beautiful, easily enjoyed by people with good vision (not me). I actually caught myself wishing I were about a foot tall to truly appreciate them. The problem is, at that size it would take a lot of time to get from the bloodroots on the main path to the hepatica and the rue=anemones in the shady cultivar area. I guess kneeling and peering are going to have to work for me.
Posted by ChrisU at 4:17 PM 0 comments 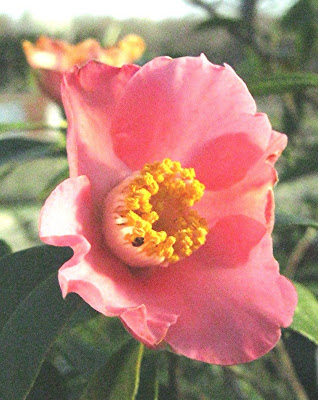 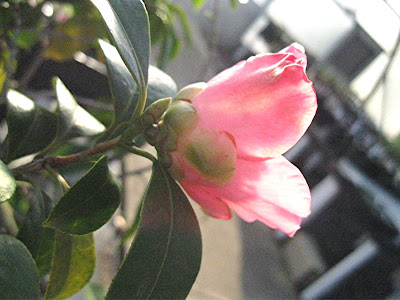 They're interesting looking, maybe what might be expected from a cross between a franklina and a Camellia japonica. We also have a seedling from this plant with fat buds that won't open for a while. It's obviously a double flower; I'll be curious to see what it looks like. The cuttings from the plant in the picture above rooted, and were potted up last fall. They seem to have rooted out through the small pots they're in but are showing no signs of growth. Possibly they want more warmth, but that isn't typical of Camellia japonica. Franklinias in a warmer greenhouse, haven't begun to grow yet, so it could be a reflection of that side of its heritage. Or it could just be we potted the cutting up too soon and they're being a bit recalcitrant. I expect time will tell.
Posted by ChrisU at 4:14 PM 2 comments 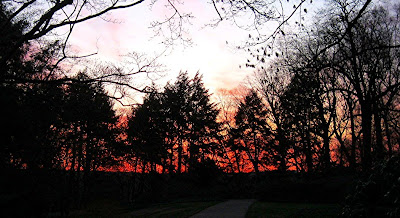 This is a view east from the Dogwood Collection parking lot down the walk. The air was clear and the silhouettes of the trees were preternaturally disctinct against the fiery sky.
Posted by ChrisU at 4:10 PM 0 comments

We worked in the (Holly) Magnolia Collection today 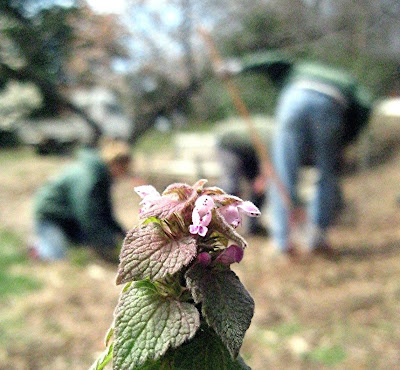 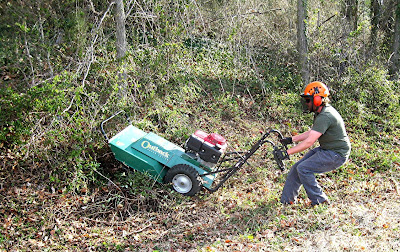 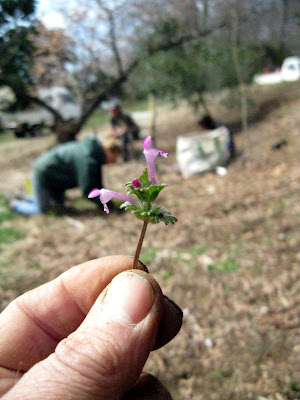 Michael used the walk behind bushhog, Ed chainsawed, I weed wrenched, everyone weeded. It's going to look good for this Saturday's magnolia study day.

Most of the weeds we pulled were "winter annuals", that is, plants that germinate in late summer or fall, grow through the winter, flower in late winter or early spring set seed, and die. Lamium atropurpureum and L. amplexicaule are both pretty, but we pull them. I leave many of them in the Adelphi garden.
Posted by ChrisU at 3:14 PM 0 comments

Here's the story: I have every expectation that this 'Heritage' birch will live to a ripe old age 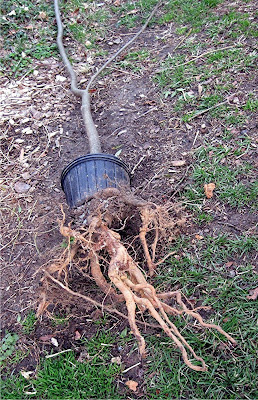 Sure, things could have been done differently; it could have been potted up two years ago, or lined out, or better yet, planted, but it's going to be all right. I'm not a plant pamperer, but that doesn't mean I think it's a good idea to push them to the limit. I do think though, that it's important to understand what those limits are, just how far things can go before....we really have to worry.

This was a gift from a friend, Lynn Title, who had neither a use for it nor the heart to get rid of it. We're replacing an 80 x 60 truncated triangle of bamboo that formerly occupied the back of the yard with more civilized plantings. The birch will be part of that project.

I guess my point really is, that sometimes we do more than we need to for our plants, provide unnecessary inputs. Plants are tough, many of them very tough. They'll live if you give them the slightest chance. Maybe not lady slipper orchids, or franklinias, or daphnes. There are demanding taxa, but most of the plants in our gardens are survivors. They've been evolving for over 300 million years and in that time have accumulated some skills and strategies for getting thorough lean times. We aren't doing them a favor if we overwater or overfeed, we're just creating spoiled individuals that are less able to stand up to adverse conditions when and if they do occur.
Posted by ChrisU at 1:05 PM 0 comments