When Mike Dirr tells you your garden "was a joy".....well, that's a good thing

That would be the Asian Collections at the US National Arboretum. And when he follows it up, in the context of a discussion about universally diminishing resources with the comment that, "you can tell the people who work here know what they're doing and care", well....whoopee

I picked a bad day to leave my camera at home! Ten fire engines at 7:00 then a visit from the author of the Manual of Woody Landscape Plants and the godfather of the same. Oh well.

I try to not carry my camera once a week. I don't always succeed. I think I see the world differently when there's no possibility of photographing it.  Things are a lot easier than they were 25 years ago so that carrying a camera isn't the terrible responsibility it used to be but it's still a burden. Back then it took from an hour to all day to take a decent close-up of a flower. Now I bet I can do it in 25 seconds. And that includes taking out the camera case, opening it, turning the camera on, changing a couple of settings, framing the shot, and taking the picture. My pictures are, I say once again, snapshots. The exposure is acceptable, the image is usually sharp, and the composition is generally pretty good. I can take credit only for the composition. I owe the rest to technology.

Oh yeah, the fire engines were a response to a smoke detector tripping inn the new greenhouse complex. Amanda and I heard the alarm when we arrived just before 7:00. Because she's conscientious, we checked it out and smelled a little smoke. There was no fire. We contacted Security who checked the alarm and called it in. Very quickly there were ~10 units on site. Most left quickly when no active fire was discovered. They cleared the area and we were back in withing the half hour. I never found out the source of the smoke but it smelled like bearing in a motor or a pump.
Posted by ChrisU at 2:28 PM 1 comments

Anemone hupehensis.....we have a lot of "Japanese Anemones" in the Asian Collections 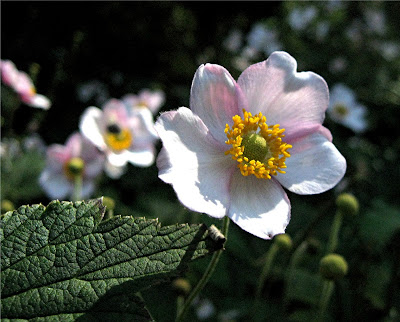 These are Chinese and descendants of plants that I moved there in 1992. They live near the middle of China Valley between the bend in the path and the dry streambed on the south end of the collection. This is a wonderful plant for fall. You can cut it or just enjoy it. Obviously it's a long lived perennial without many issues. I have seen anthracnose on the leaves in cold wet springs, but nothing serious.
Posted by ChrisU at 3:12 PM 0 comments

Okay, it's not a florist Gloxinia, still it's an attrative enough flower....Hemiboea subcapitata 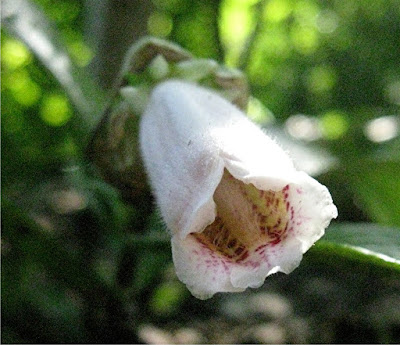 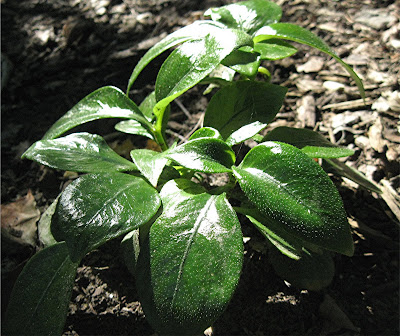 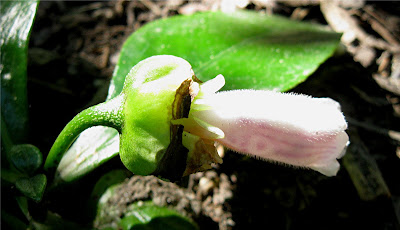 The few references I found seem to give the flowers no respect. I guess everything's relative. We got these plants last fall and wintered them over in the greenhouse. They were evergreen inside; this winter we'll find out how they do in the weather. The leaves are pleasantly glossy and dark green. They are thriving in the two places we put them. Neither site has great soil. Both do have consistent moisture and some sun, more shade. If this plant is hardy it could make a quite pleasant groundcover. Ours have grown rapidly and have the sheen and color of happy plants. Stay tuned for next April!
Posted by ChrisU at 3:04 PM 0 comments

Oh no it isn't. Not in the Asian Collections.......it's Vitex negundo var. cannabinifolia 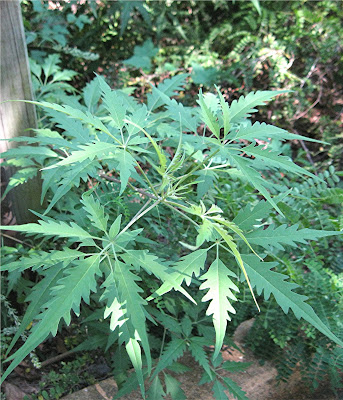 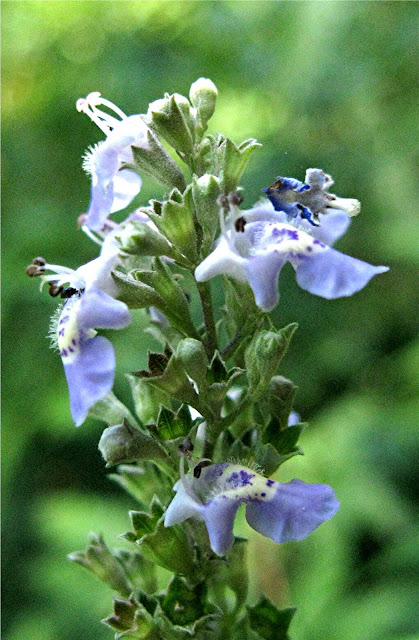 Even the common Vitex (agnus-castus) is regularly mistaken for marijuana but this one is even creepier. Vitex are fast growing deciduous shrubs/trees that take drought, full sun, don't have issues, and attract butterflies. Sound perfect? Well, the leaves have a kind of pharmaceutical smell that I find unpleasant. So I don't smell them. Good plants for hot summer gardens.
Posted by ChrisU at 2:57 PM 0 comments 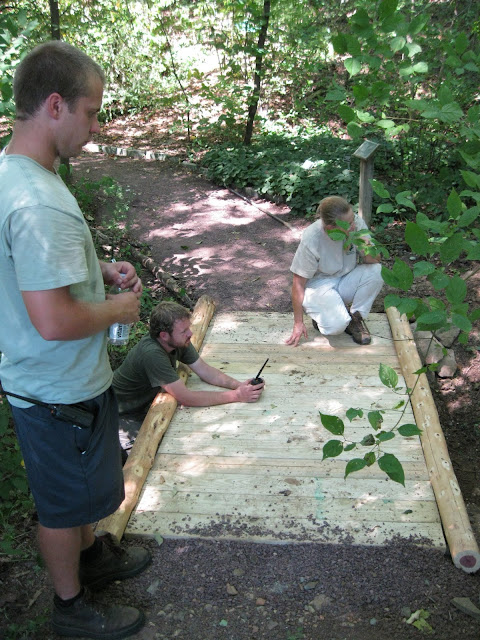 It's orders of magnitude more attractive, more functional, and safer than its predecessor, whose loose planks could flip up and hit you in the backside.
Posted by ChrisU at 3:45 PM 0 comments 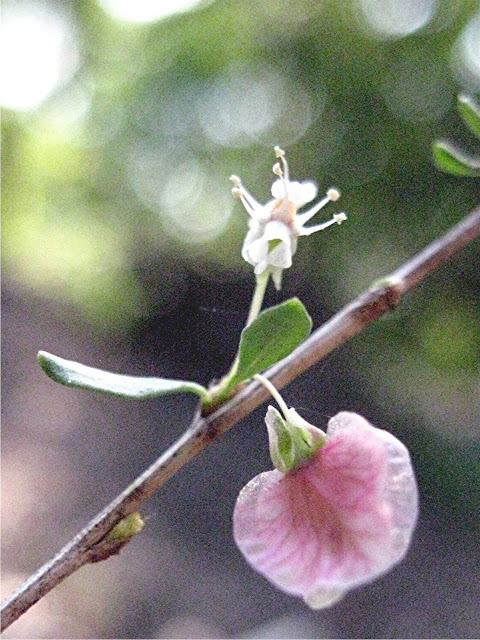 This picture shows one flower and one developing achene.Heavier flower set makes it a much more colorful plant.We planted it on a dry sandy uncongenial slope which is just the kind of place it likes. The plants are surviving but don't seem especially happy. It's possible that it needs to develop a good root system, as some xerophytes do, at which time it may look nicer. Still it's interesting to have this very uncommon plant in the garden.
Posted by ChrisU at 3:42 PM 0 comments

Arisaema consanguineum, one of the taller Asian Jack-in-the-Pulpits 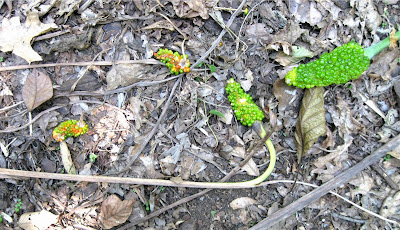 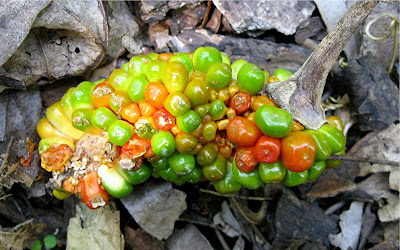 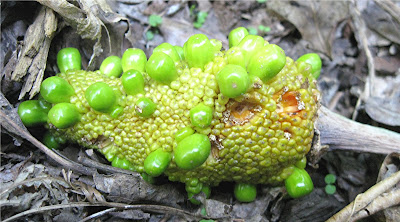 I was just walking through the middle of China Valley and there were all these fruiting inflorescences collapsed on the ground. Kind of gruesome but interesting. Sometimes in my own garden I extend the ornamental life of the fruit by cutting the stalk just below the head and impaling it (the head) on a small length of bamboo stake. I push the stake in the ground and voila. I know it's wrong but hey, they fall down like this and you don't get to appreciate them otherwise. And these seeds aren't just for show, this one seeds around for us.
Posted by ChrisU at 3:34 PM 0 comments 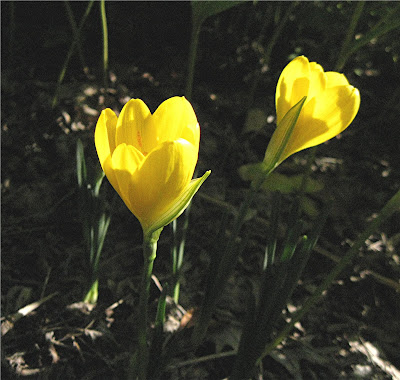 Amanda and I both transplanted a number of these last year from the original planting. None of the transplants are flowering but many plants are nosing out of the ground. You have to be patient to be a gardener!
Posted by ChrisU at 3:07 PM 0 comments

More Benches and a new Bridge 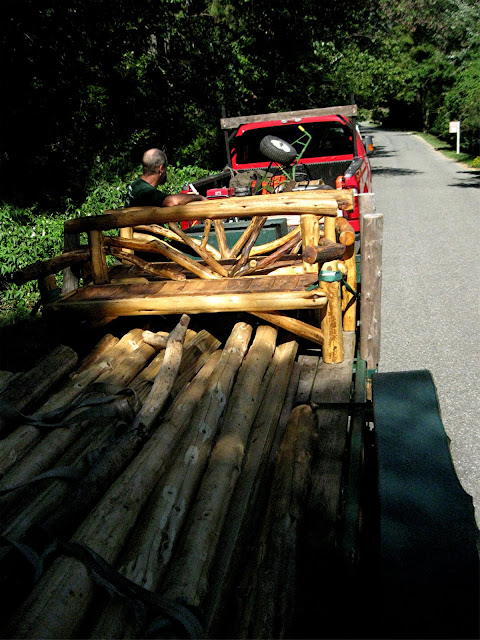 Who should I meet parked by the lower end of Fern Valley but David Robinson, creative artist, master craftsman, superb carpenter, and proprietor of Natural Edge. He showed up to deliver two more of those wicked benches and build a decent bridge over the stream at the lower end of Fern Valley. The reason I never attended to that task was because I had always hoped for this exact resolution of the problem (and I'm lazy). Now it's going to happen.

He didn't seem depressed at the fact that half a dozen large trees had fallen on a portion of his earlier work. Job security I guess. Maybe it goes along with being able to juggle all those roles, but David has an interesting perspective on the world and a personality that resonates with me. I'm glad to see him back!
Posted by ChrisU at 3:03 PM 0 comments 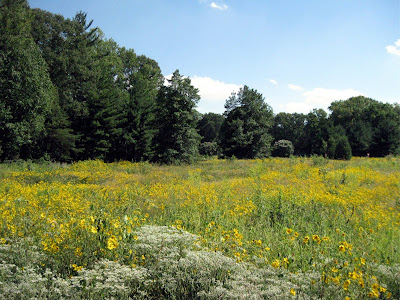 Not in the good way (maybe this winter) but figuratively. This Bidens has run through the Meadow/Prairie like wildfire.  It's leapt the road and begun to take over the ellipse. It's already a sight to behold. Two years from now......
Posted by ChrisU at 2:48 PM 0 comments 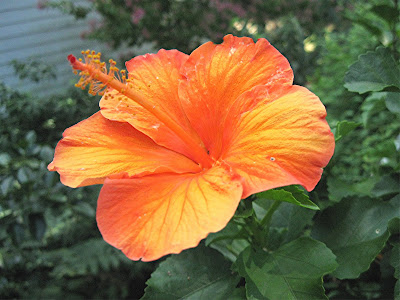 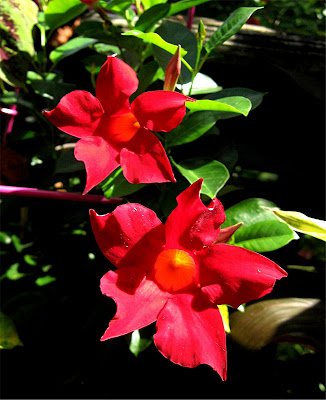 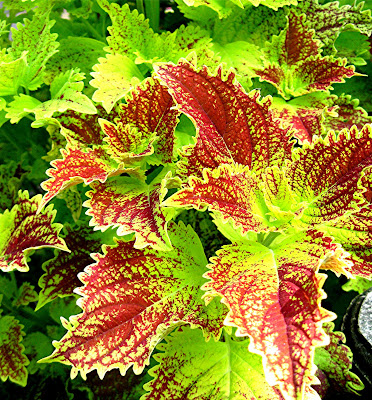 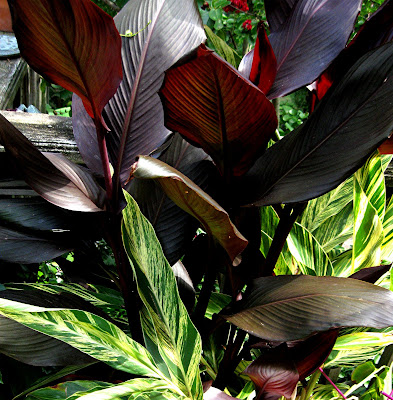 It must be an effect of the holiday weekend. Anyway, I'm going to have to explore some subtle effects later this week.
Posted by ChrisU at 11:01 AM 1 comments 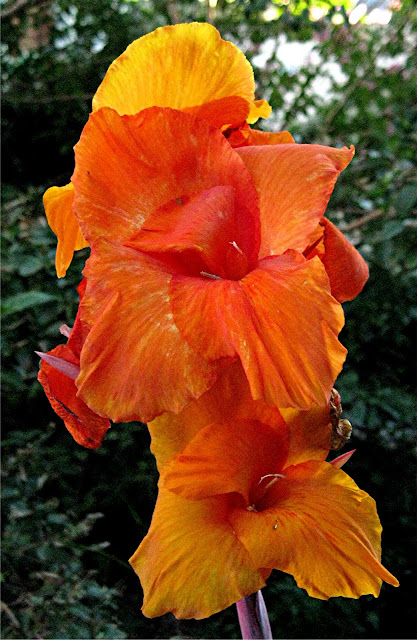 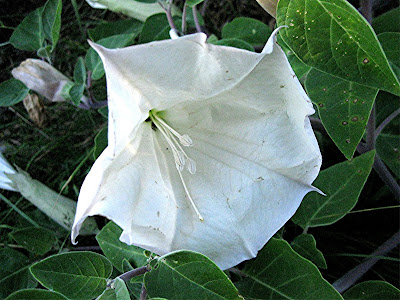 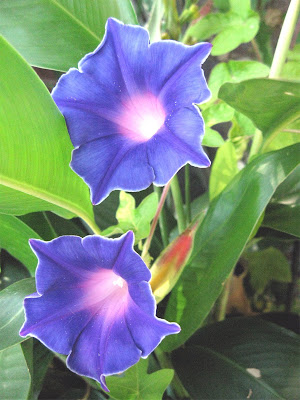 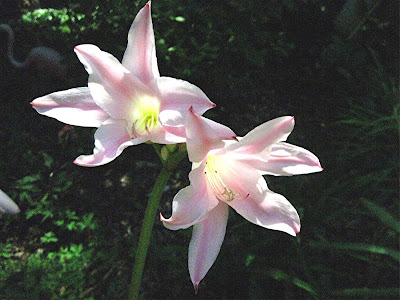 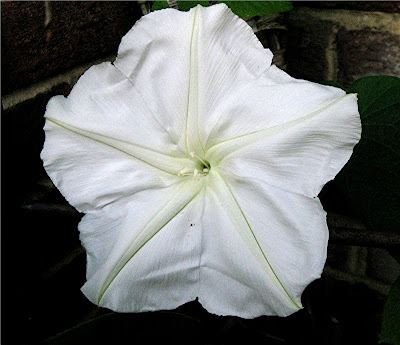 They stand out so clearly amidst the chaotic explosion of vegetative growth that we experience here during the summer. I make my way through the garden haltingly using these flowers as referents and waystations.
Posted by ChrisU at 7:02 PM 0 comments