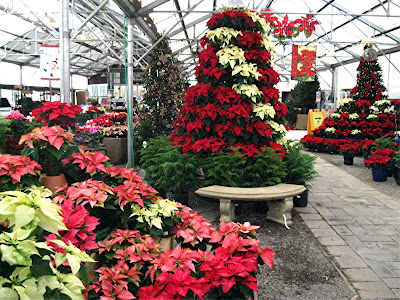 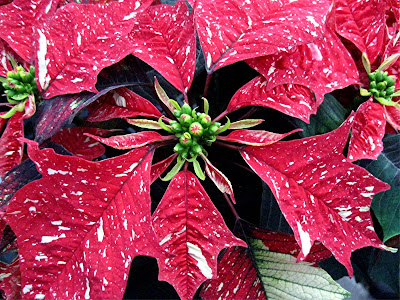 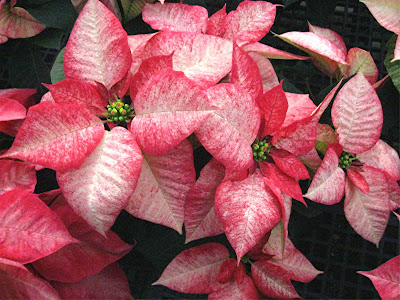 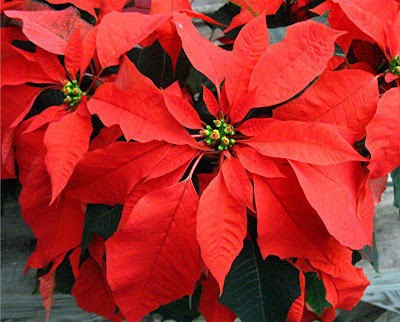 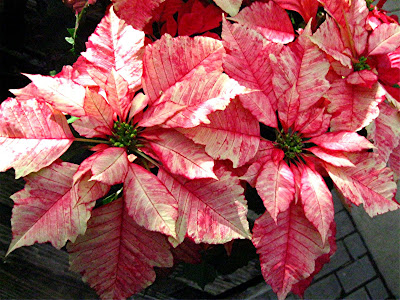 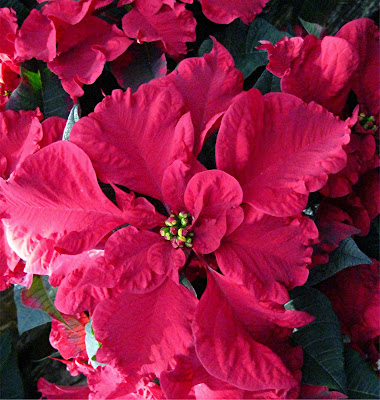 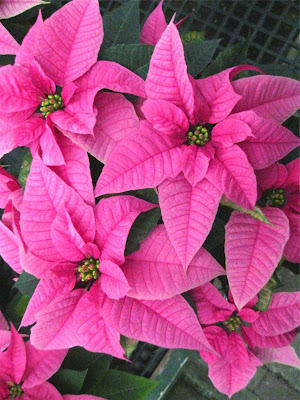 They had plenty of traditional reds and whites, but I was intrigued by the "novelty" varieties. The poinsettia trees bring back memories.
Posted by ChrisU at 10:52 AM 0 comments

This little Lacebark Pine got me thinking....always a dangerous thing! 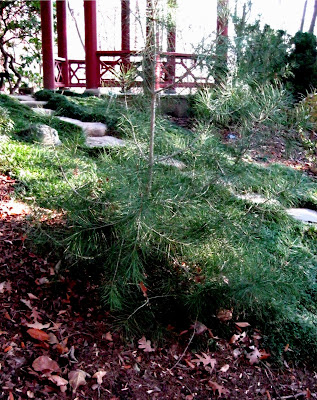 I like gardening as a metaphor for life; both require us to spend a lot of time dealing with loss

I've been meanign to remove at least one limb from the large Cedar that overhangs this juvenile Pinus leucoderma. It's actually within 15 feet of two mature Cedars. I expect it was planted with some hope that it could replace one or both of them when their time comes. Of course they are immense, drop good sized limbs pretty reliably in heavy snow or ice events, and so are almost certain to destroy this small tree before it can fulfill its mission.

If dealing with loss is a part of gardening, then unfounded optimism constitutes our defensive posture. We're just going to proceed as if that Lacebark Pine were planted in the middle of a field and tended regularly by three super gardeners. If it works out, fine. If not, then we'll deal with that when it happens.

We actually did have a mature Cedar fall this past winter and if you hadn't known how things had been, you'd have to read the clues carefully to know a catastrophe had occurred. The large Poliothyrsis sinensis, is suspiciously one sided and there's a bank of shade perennials across the path that toasted in the extra sunlight. Stewartia rostrata burned up too this summer but I bet that doesn't happen next year when it will be more acclimated to its new conditions.

If I hadn't seen them first-hand, I'd have trouble believing all the good things that have happened to that space since February. The tree contractor took three tries to remove the bulk of the material, but left the bole. An ASRT project cut the trunk into manageable slabs. After the contractor ground the stump and roots, Nathan graded the area with the Bobcat. I can't say enough about what Amanda has done since. She took advantage of the sunny area to transplant a handful of plants from places they really shouldn't have been. She pruned the damaged understory plants, added some interesting perennials, and mulched it. The space is so beautiful that I wonder if my optimism is not unwarranted.
Posted by ChrisU at 3:57 PM 0 comments 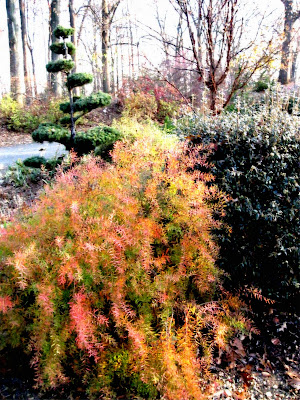 I like it for foliar texture, the chartreusy yellow color of the leaves in season, and this good fall color. This particular planting began life as a trio. After a few years they began to crowd each other so this spring I transplanted the other two. One went across the street and past the weeping Katsura, the other across the street from that one. Now there's a golden triangle to step you visually through the area. Nothing subtle about my designs.
Posted by ChrisU at 3:13 PM 0 comments

Colocasia 'Diamondhead' & 'Blue Hawaii' are taking part in an experiment 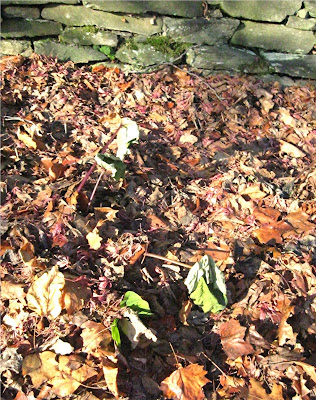 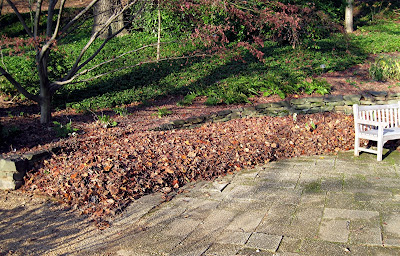 That's 'Blue Hawaii'; it doesn't look good does it? We're hoping the roots are snug beneath those leaves. We planted a mixture of those two varieties this year between the paved terrace and the semicircular low stone wall. The wall ranges in height from about a foot to almost 3 feet, and faces just about due east. Rather than dig the plants and store them over the winter we decided to see if they could make it through the winter under this deep leaf mulch (we pulled leaves down from above the circle and mounded them on the bed.. The east facing wall ought to help as should the fact that any roots penetrating under the wall are all of a sudden way underground. I'm thinking that from the point of view of temperature all ought to go well after all, Tony says they're zone 7b and that's about what we are.

I have noticed though that chipmunks live in this wall and I hope we haven't created a sort of a root cellar for the little rodents.Hey, Colocasia esculenta! I've noticed that anything that we eat always seems to attract extra attention from herbivores. If so, we've set things up nicely; if the snow is too deep, they can just tunnel over through the leaves. You're welcome guys. 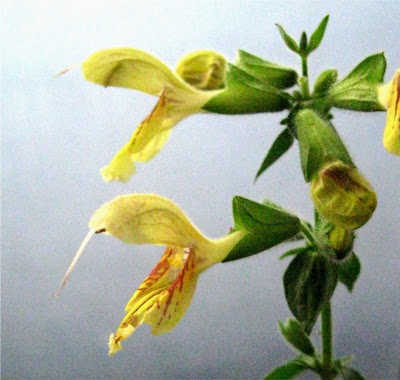 This is a European Salvia. Most of the other's I've posted over the past few weeks are from our side of the ocean. Not too many of them are yellow either.
Posted by ChrisU at 3:10 PM 0 comments 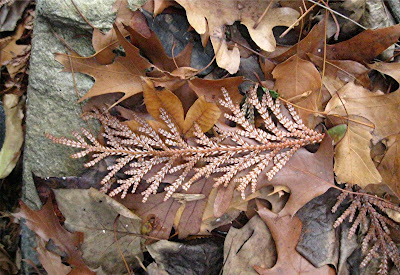 Betty and I were cutting back perennials and doing some pruning near the Chimonanthus overlook today and noticed that yesterday's winds had blown dead branches from the Thujopsis everywhere.
Posted by ChrisU at 3:03 PM 0 comments

This caught my eye in Gotelli as the sun caught it 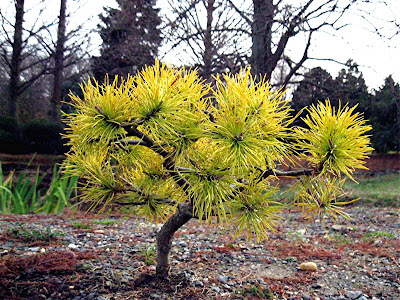 I think it's one of those golden selections of Pinus sylvestris, maybe 'Gold Coin'.
Posted by ChrisU at 2:56 PM 0 comments 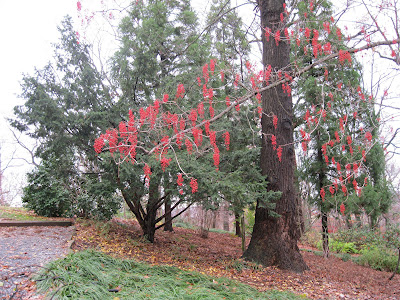 Today was a miserable day so I appreciated the effort this plant had gone to to bring color to the garden. The tree is quite tall so we're fortunate to have this descending branch. Idesia is just a cool plant. If I had 5 acres, I'd plant a grove of them, maybe even 1 acre.
Posted by ChrisU at 2:32 PM 0 comments 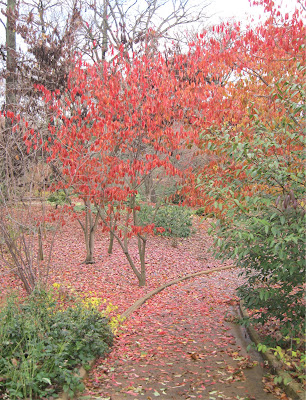 Today was bleak but there are spots of color here and there throught the Collection.This plant is one of a grove; its seven siblings are pretty much defoliated. I can't begin to explain it. So far as I recall they moved at roughly equal pace last fall so who knows what's going on. The biological world is so incredibly complex we watch things like this without a clue as to the explanation At least I do.
Posted by ChrisU at 2:27 PM 0 comments 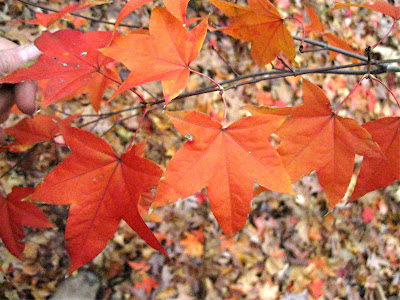 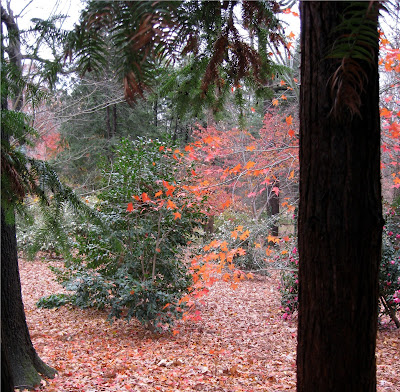 December color actually. This is a nice smallish Chinese Maple noted mainly for it's interestingly liquidambar shaped leaves and it's good fall color. This was grown from seeds collected on the 1996 NACPEC trip. I'm peering at it through the trunks of Cunninghamia. (in the Asian Collections US National Arboretum)
Posted by ChrisU at 2:20 PM 0 comments 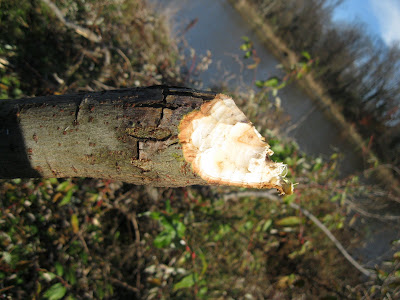 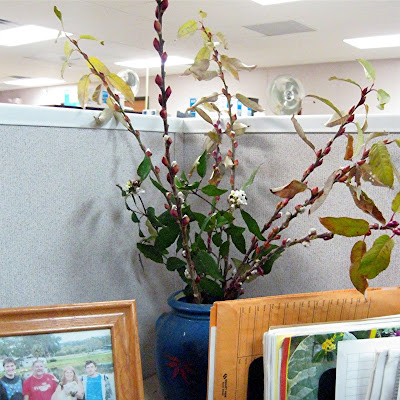 Can't say as much for the beavers who've cut two large stems off of the Salix chaenomeloides growing on the Anacostia River floodplain. So I cut the nice stems for my cubicle. I like them cut for the winter holidays. Their giant red buds are interesting additions to flower arrangements. I brought this big crockery urn in anticipating winter branches, and it's doing a good job holding these up.
Posted by ChrisU at 3:15 PM 0 comments 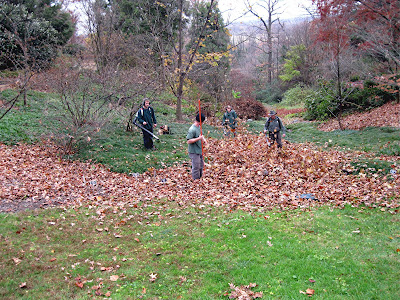 One of my favorite tools for "leaf management" is "leaf team". In the late fall/early winter, all the gardeners work together twice a week on the leaves in a particular collection. Every collection gets one day and this was ours. We did a lot including blowing the leaves off the Camellias on the west side of the road, clearing the groundcovers in the Japanese Woodland, and removing leaves from the groundcovers, including turf, around the GCA circle. In the picture Amanda, Michael, and Coley finish blowing the leaves into a pile; Nathan has already began to tarp.

I would estimate that today, of all the leaves we addressed, we "rearranged" about 65 percent, and so only put about 1/3 out for pickup. Even these leaves will eventually be returned to the garden after being ground and slightly aged.

We lucked out totally so far as weather is concerned. The rain forecast for today held off so that we were able to get out project in. If it falls tonight, two inches, it'll serve to mat down the leaves that we moved to other places; hopefully enough so that they'll stay put and decompose in place. That was good, but better still was the fact that 3+ weeks ago the leaves on the large trees were green and by today they were pretty much down. That means they were still largely dry and hadn't had time to work their way into twiggy traps. They were easy to deal with. Some years are good, some bad, and I guess most somewhere in the middle. This has been a great leaf season so far.
Posted by ChrisU at 2:53 PM 0 comments

Hibiscus mutabilis trying to flower in USDA Zone 7(b?) 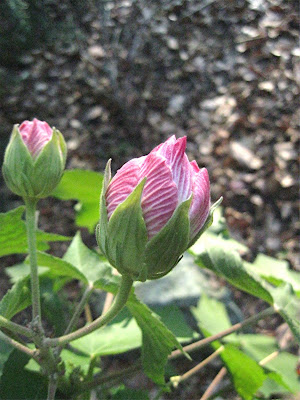 Its a good thing the buds are beautiful because I don't think it's going to make it. We've got one more warm, albeit wet, day and then the nights begin to consistently go to freezing or below. And what is it about the architecture of Hibiscus buds? I love 'em.
Posted by ChrisU at 2:37 PM 0 comments 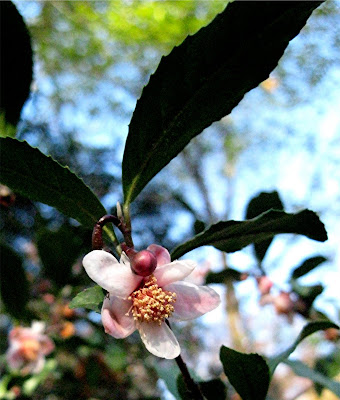 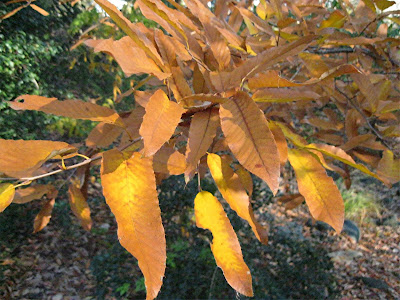 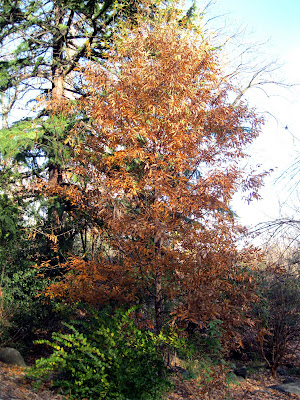 This tree was grown from seed (acorns!) collected in 1994 in Wudan Shan. It's . beginning to get some size and seems healthy and well-formed. All of the Asian Oaks don't do well for us, but this one looks good.
Posted by ChrisU at 2:13 PM 0 comments

Stewartia x ?....it's last leaves of the yeaer 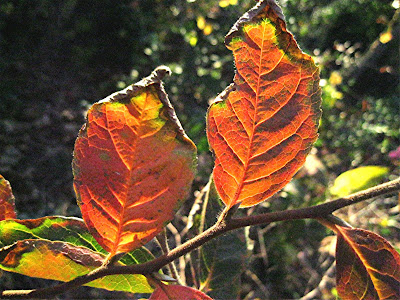 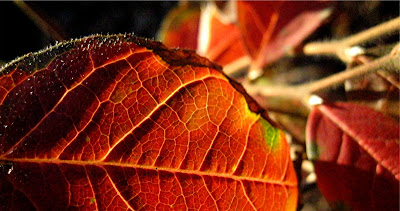 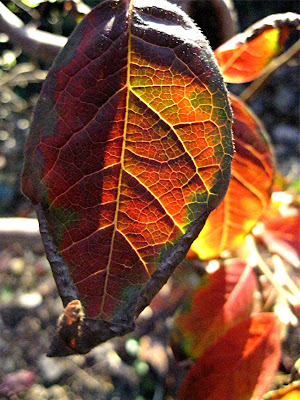