The thermometer reached 41F yesterday then dropped to 22 last night; we had a super frost! 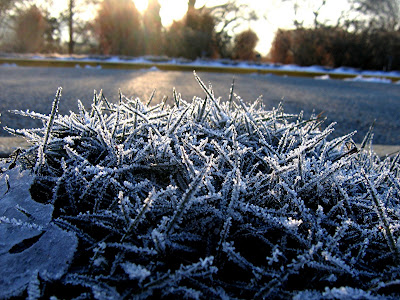 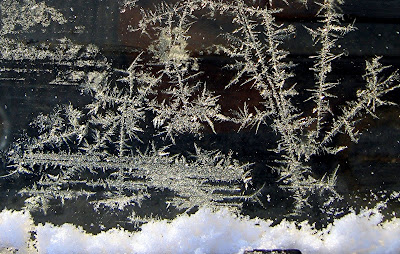 I'm not really a "winter guy" but this morning was something! Of course the Dianthus is beautiful, they're used to being beautiful . I think it was a new experience for the ancient Misubishi service vehicle (even if it was just her windshield).
Posted by ChrisU at 3:28 PM 0 comments 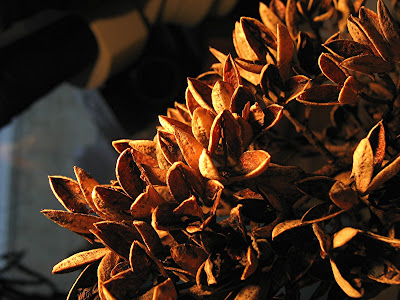 This is an obscure Asian large shrub/small tree in the Flacourteaceae or the Salicaceae depending on your system. It's an interesting plant with large, coarsish leaves and panicles of fragrant flowers in the summer. Easy of cultivation, it seems to be tolerant of heat, less than outstanding soil, USDA Zone 7 winters and a certain amount of drought. Of course I like the fruit.

It was bleak yesterday (and it's bleak today!) 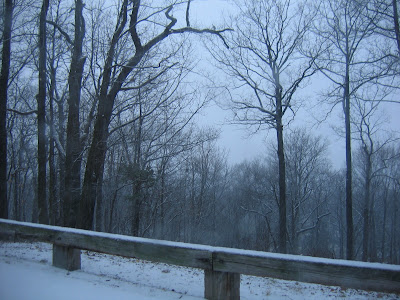 If it weren't snowing you could see the Capitol Dome and the Washington Monument from this oerlook. The snow was pretty though. 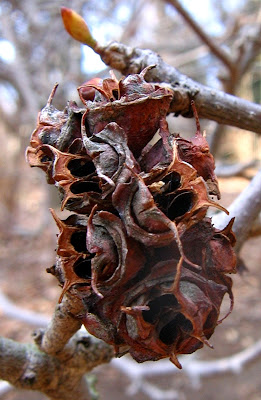 Hey I'm a sucker for dehiscent dry fruits. This one isn't quite so geometrical as the Trochedendron I posted a week ago but its curved bilateral symmetry has almost a more organic feel. Of course I might not notice them at all surrounded by the floral bounty of spring or among the glorious colors of fall, or even in the heat of summer, but that's okay because they're here now. And we need to find things in the winter garden to provide the delight that comes so easily in other seasons.

It snowed a bit today, maybe an inch and a half. After a hiatus of a few hours it is supposed to come back with snow, sleet, and freezing rain. Oh boy. The days are getting longer though. This is the last day for months when we will only add 1 minute. From now on out we gain either 2 or occasionally 3 minutes a day until sometime in late May. The sun is slowly moving higher in the sky and on Groundhog day (next week!) the average daily low temperature will rise from 27 to 28F degrees and the average daily high will go from 43 to 44F. These are, of course, baby steps but on cold snowy days I need something to grasp at!
Posted by ChrisU at 3:50 PM 0 comments 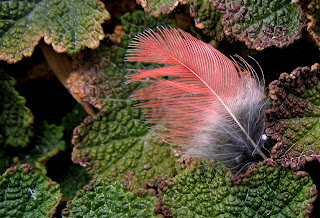 It's tiny, about an inch long, and I don't know to whom it belonged. Your guess is as good as mine! Pileated woodpecker? I don't know but I noticed it today towards the bottom of China Valley. I quickly looked around to see if it had drifted away from the remains of someone, some bird I mean. I didn't find any remains. Anyway it looked good against the Rubus calycinoides.

It felt far colder today than it was (~30F); there was a dampness in the air that penetrated. We had light snow off and on though not enough to amount to anything. Because it barely reached freezing the flakes didn't melt and I was able to examine then with a lens, but the beautiful crystals had been compressed into little "snowballs". More snow is predicted for late tonight and most of tomorrow, but not in any quiantity; we are expecting less than 3 inches. Still, that would be more snow than we had last year. Thanks to my obsession with weather, I know that temperatures are supposed to be cold but not too cold for about a week and a half and then heat up. AccuWeather predicts 4 days in a row with temperatures in the mid to upper 50s! starting Friday next. I know enough to take this optimistic forecast with a grain of salt, but it will be the second week of February by then and spring will be on its way so anything could happen. Temperatures in the mid-twenties last week in Wildwood, Florida somehow didn't disrupt plumbing in the Florida house. The tenants are in and happy; their first day it got up to 81F apparently an improvement over the weather in Buffalo.
Posted by ChrisU at 1:52 PM 0 comments

The Gotelli Collection on a cold day in late January 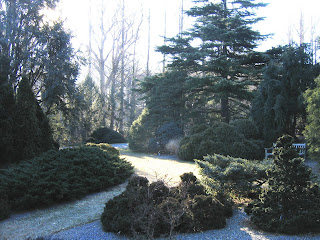 Friday I spent the morning in the Gotelli Collection as part of a group project doing winter pruning, cutting back lodged grasses and mangy looking perennials, and generally spiffing things up. Chris Carley, the acting curator, is giving an important tour this March to a big group that will include a large contingent of local horticultural professionals We want the collection to sparkle! This is the view towards the road from the small area where I spent most of my time. It's literally sparkling in the photograph as the low morning sun glances over a heavy frost.

I am struck, every time a project pulls me into this collection, by just how spectacular a place it is. There are hundreds of different taxa, some very large, up to 100', others, scores of years old but less than a foot tall. All shades of green are represented in the needles, and there are blues, silvers, golds, and yellows. Forms range from the classical narrowly pyramidal upright forms of spruces and firs to completely prostrate junipers and every possible variation in between. There are dozens of weeping forms including one of the largest Blue Atlas Cedars that you will likely ever see. Many of the cultivars are quite rare and unusual and though some of them are more common in the trade now than they were when Gotelli planted them, it is certainly unusual to be able to see so many mature specimens in one place.

P.S. In the background of this photograph you can see the dennuded branches of Metasequoia glyptostroboides, the Dawn Rredwood. This giant deciduous conifer was discovered in China in the mid 1940s only a few years after it was described from fossils that dated to the Cenezoic era. That means, of course, that all of the trees in cultivation (and it isn't an uncommon tree) are less than 70 years old. Wow. This grove is certainly one of the oldest in cultivation and they are big. The bases of the trunks with their curiously distorted root flares are worth a trip themselves, but go ahead and look at the rest of the collection if you're here anyway.
Posted by ChrisU at 4:38 AM 0 comments