Installing the hardscape begins on the intern project 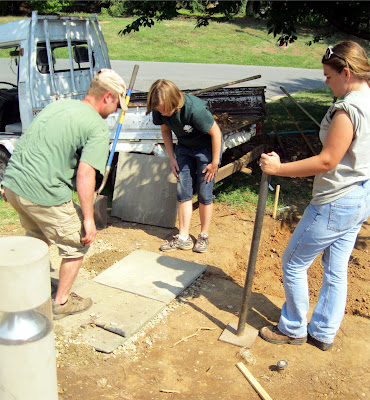 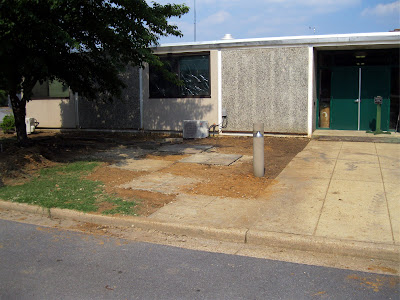 Everything is so simple in theory....well, maybe not everything, but many a plan is more easily formulated than effected. The interns began installing the hardscape for their design today and were introduced to some of the unpredictable glitches that frustrate the best laid plans. The design seems so simple, so unambiguous; they always do. But then it turns out that the topography of the site affects distances, or the walkway isn't perpendicular to the building, or the road isn't exactly parallel to the building, or any of a seemingly infinite number of unpredictable snags arise to complicate an otherwise straightforward job. One of the things that differentiates us from experienced masons, or craftsman of any ilk, is the fact that they've encountered all these snags many times and learned how to best deal with them.....tricks of the trade. I remember an old friend, who actually was once a mason, but who now designs high-end kitchens telling me that good cabinet installers could earn in the six-figure range. Well maybe not anymore, but you get the point. Kitchens aren't square either!

All's well that ends well; we fought our way through the difficulties we encountered and the project came out perfectly. Nathan mentored, I observed and did some helper stuff, and by the end of the day the interns were setting pavers themselves. An hour of cleanup and backfill will make that site shine. What with the heat and the humidity and working in front of that west-facing wall in the afternoon, none of us were inspired to stay late, but it'll happen. And when they add plants, it'll be special. I'm psyched.
Posted by ChrisU at 5:44 PM 1 comments

The Tropicals are having a good time this summer 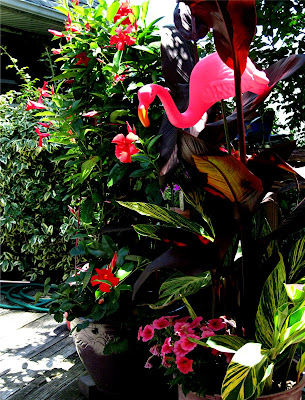 I thought we were having a hot summer until I heard from my brother in Oklahoma City; they've had 28 (29 now?) days over 100F (~38C). Wow; I don't hear so much demagoguery lately on conservative talk radio about the "fallacy" of global warming. It feels a bit like the world is coming apart at the seams: crazy heat waves, vulcanism, earthquakes, unprecedented numbers of monster tornadoes. I've always maintained that the "pathetic fallacy" wasn't a fallacy.....I can't explain it but the physical world does sometimes seem to reflect our human condition. Microcosm/macrocosm thing I suppose. The world is a curious place.