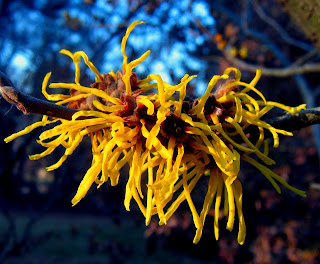 Even in the middle of a moderately cold winter there are plants flowering here at the Arboretum. This is a cultivar of the Chinese witch-hazel. Most witch-hazels that you encounter in the nursery trade are hybrids of the Japanese and the Chinese species. Dirr observes that the crosses exhibit hybrid vigor and produce stronger larger plants.

It is my observation that the Chinese species has a much stronger tendency to hold its foliage than either the Japanese or the hybrids but this is anecdotal on my part. I do remember though, two winters in the early 90s, spending several days on a ladder clipping off hundreds of brown leaves one at a time from a specimen of Hamamelis mollis that used to live at the entrance to the Asian Collections below the Dove Tree. That allowed visitors to enjoy the flowers without the distraction of brown leaves. We did some serious gardening back then! The curator, Lawrence Lee, who directed that project has long since departed, returning to his home state of California. The plant was also removed at some point during my absence, but I'm back! What can it mean?
Posted by ChrisU at 4:20 PM 1 comments 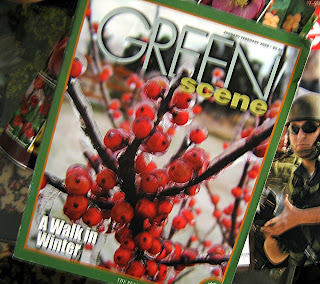 Green Scene came today; it is the magazine of the Pennsylvania Horticultural Society. We have belonged to PHS for 20-odd years, in the beginning because the cost of membership is roughly equivalent to the cost of two tickets to the Philadelphia Flower Show (the two tickets come with membership!). It's the oldest and largest Flower Show in this country and maybe the largest in the world? I'm not going to do the research, but I seem to remember that. Anyway it's a wonderful show. The theme this year is Bella Italia; I expect lots of lavender, stonework, and grapevines. The show has gotten more and more crowded over the 2+ decades we have been attending it. Our strategy at this point is to arrive in Philadelphia around noon, eat lunch (no cheesesteak for me anymore....the last few years its been Pho), and wander into the show about 2:00. The show is open til 9:30 during the week and traffic seems to thin out as the afternoon progresses. This year the dates are March 1-8 so, with any luck its going to bump up against spring but its still worth the trip.

But that's not what I started out to talk about! It's the magazine. I have subscribed to a lot of gardening magazines over the years and read a good many more. Green Scene is definitely in the top 10. There is an awareness of what is new and hot that I don't find in other publications. They really do know what's going on. There are more great public gardens in the general area of Philadelphia than anywhere else in the US and their staffs are regular contributors to GS. The magazine reminds me of American Horticulturist of the 80's; that was my favorite gardening magazine of all time. Not only that, you don't just get the tickets and the bi-monthly magazine, there's more. Reciprocity in the form of free admission to many many great gardens and arboreta, is itself worth the cost of membership. Hey I'm pimpin' it cause I like it!
Posted by ChrisU at 2:28 AM 0 comments

Some years we look forward to it and some years we just go but this first week of January is MANTS time for Nurserymen and Horticultural professionals within striking distance of Baltimore. Held at the Baltimore Convention Center and featuring nearly 1000 exhibitors, this is a huge trade show. I have been going for at least the last 25 years, either as an employee of Behnke's Nurseries, Karen Upton and Sons Landscaping, Senator and Mrs. John D. Rockefeller, or The National Arboretum. Actually, I have gone on my own occasionally; it's well worth 15 dollars to have access to the displays of plants, gardening tools, heavy equipment!, and whatnot. Information flows. In the Mobjack display I saw an incredible specimen of weeping Styrax japonica that was at least 6' tall.

Today it was a great place to be while we were getting some of what begins to look like 2.5" of rain. The show runs Wednesday, Thursday, and Friday. I usually avoid the first day (today) because it is normally the most heavily attended. It wasn't crowded today though. I am picturing companies that maybe used to send 15 people sending 1 or 2 or 3. It was nice to be able to talk to Don Shadow (Shadow Nurseries) for 10 minutes before another customer stopped....usually you have to wait in a huge crowd just to say hello!

The Research Unit and the Gardens Unit did nursery outreach today at the show. We went out in teams of two to distribute information: a sample of the new Arboretum Introduction Callicarpa 'Duet', and posters featuring our plant introductions to targeted nurseries. I was paired with Margaret Pooler from Research. Margaret is a research geneticist and shrub breeder, obviously the brains of our team. After distributing the largesse to our targets, we discussed the condition of the industry with them and solicited recommendations for things we could do to improve the state of things. Good conversation but no epiphanies. Our first stop, Hawksridge Farms, has always caught my attention. Among more usual offerings, they list some very cool and very unusual plants. I asked Rick Crowder, the General Manager, how those plants, the plants I like, fared in the marketplace; apparently they aren't the greatest sellers, but he vowed to continue to grow them anyway.

Here's the thing; I have heard that story before. I heard it later that day from a friend, Cindy Watson, of Cam Too Camellia Nursery. They have been growing some less common Stewartia species but gave them up because there was no demand. The problem is that there is a demand; there are people who want those plants. There may not be as many customers for the exotics as there are for the more common taxa, but we are out there. The problem is making the connection between the source and the demand. I have no ideas!
Posted by ChrisU at 4:13 PM 1 comments