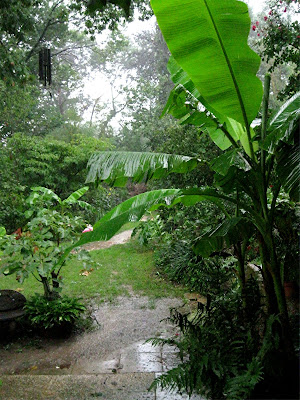 It's been raining steadily since late this morning; the rain gauge shows about 3/4 of an inch (18 cm.). The wind has been steady without any spectacular gusts. One of the major bands must have arrived because over the past 15 minutes the rain has become quite heavy and the gusts have increased enough in velocity so that every few minutes one is audible. I'm guessing they're around 40mph. The worst is yet to come but it still feels like, as far inland as we are, this won't be a horrible storm.

Actually, she's headed towards the mouth of the Chesapeake Bay but that puts us well within the radius of her effects. The strongest winds are forecast for right around midnight tonight. By morning the storm'll be headed away and I'll be headed in because I'm the weekend waterer this Sunday! I never actually post from work but if I have time, I'll sneak in a small one.

The storm has actually decreased considerably in strength both in terms of where she was yesterday and where she was predicted to be today. It begins to look like the horror that we had feared won't come to pass. There was some thought yesterday that damage would be serious enough that the government would be shut down here Sunday and so I wouldn't even go in. I'm thinking that's not going to happen. Still, trees weakened by a prolonged semi-drought, turgid with two weeks of good rain, and standing in saturated soil, won't so hard to push them over as they normally would be. We'll have to wait and see. 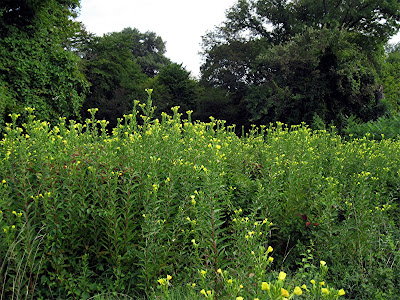 I don't remember it being there at all before and now it's, it's, it's taking over. I enjoy watching these explosions where a particular plant will suddenly dominate an area. Joan's yellow Bidens has been threatening to take over the Arboretum and now it would seem to have some competition.

The funny thing is that though I've always admired this plant, I've wavered about whether to let it into the garden here in Adelphi. I relented last year and so have a dozen or so stems flowering under the large Yucca rostrata in back. It seems like such a token gesture beside these huge stands! 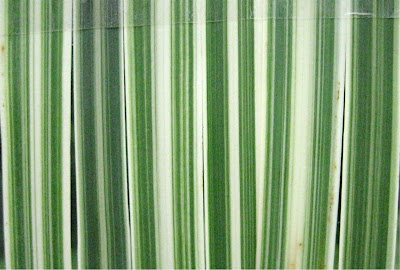 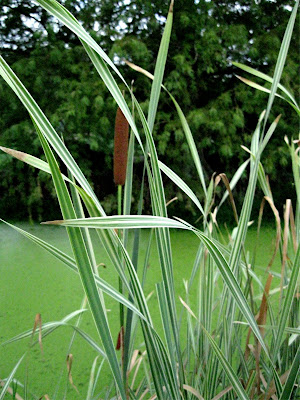 This is a very cool plant that grows in the small pond near the road in the Gotelli Collection. Hey, iti's a cattail so it'll be.....vigorous, but is that such a bad thing?

Nice combination at the top of China Valley 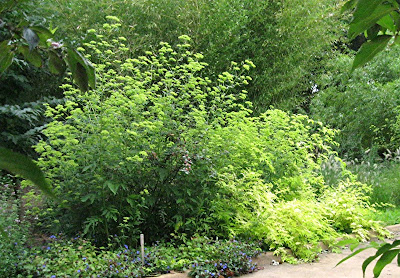 Jasminum officinale 'Fiona Sunrise', Patrinia scabiosafolia, and Ceratostigma plumbaginoides are coexisting agreeably below the nodding culms of one of our "contained" bamboos. This is thanks to our recent rains and the earlier efforts of our Volunteers. Several months ago they attacked this area which had been a confused collection of weeds and overgrown accessioned plants held together by hundreds of seedling Patrinias. I didn't give much direction and, as I expected, they did an outstanding job of weeding, transplanting, pruning, and general grooming. This week is the payoff.

Today only Betty and Eugenia came in and they were forced out by the weather but we got a good bit done along this same stretch of trail.

Musa Basjoo, another hardy banana in the Asian Collections 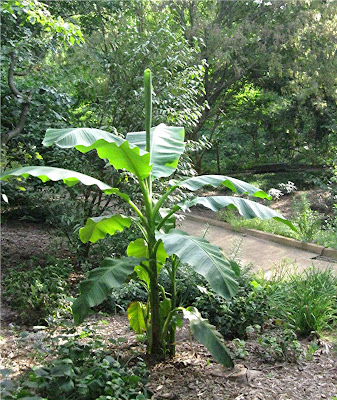 I donated this plant from my own extensive collection this spring. It was about 3 feet tall when Amanda planted it. Clearly it has thrived. Next year, with luck, we can get it up to twelve or fifteen feet. That would be the top of the leaves. I've always suspected that bananas are properly measured, to the growing tip. That would explain why I can grow Basjoo to 18 feet when it's only supposed to get from 10 to 15 feet tall. I don't care; until I'm personally corrected I'm measuring to the top of the plant. To get maximum height, it's necessary to remove the suckers from around the main plant. Or to fertilize and water so much that everybody can reach their maximum potential. You often see large clumps of Basjoo where the main plant tops out at 8 or 9 feet.

Just as Rhapidaphyllum hystrix is the only palm that's guaranteed to be hardy here in Washington even if you plant it on an exposed slope, Musa 'Basjoo' is the only banana that I can say I've never lost to winter. I've planted them in November, given them to friends who have brown to black thumbs, had them planted by clients from whom I know they received less than optimal care: never lost one. There are now a bunch (ha ha) of bananas that are considered USDA Zone 6 plants. I'm working on them at home and at work but they tend to require good siting, return so slowly in the spring that they're sort of useless in the landscape, or even die off in our harsher winters. Not Basjoo.

There's one downside to Basjoo that I know of and that it its tendency to droop and wrinkle when the air is dry or windy; even on days of average humidity it tends to sag and look tired in the afternoons when the humidity drops below 50%. Ensete/Musella lasiocarpa (yesterday), on the other hand, had those smaller, thicker, bluish leaves that remain perfect through pretty much whatever weather happens so long as the plant gets water once in a while. It doesn't get as tall though, and frankly isn't as hardy. So I guess we'll continue to grow both. Plus a few more including Musa sikkimensis, Ensete glaucum, and a new plant Brads getting next year. Still not enough for a calendar, "Bananas of the Asian Collection", not to be confused with "Girls of the SEC". 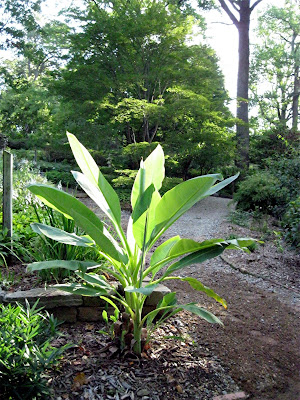 We survived our second earthquake of the past year and a half (ever) Tuesday with no visible damage. It was a 5.8 but the epicenter was 80 odd miles away so we just felt gently nudged back and forth for....way less than half a minute. In the same way that we aren't "snow savvy" in the sense that Maine or Minnesota or Wisconsin are, we aren't "earthquake ready" like say California is. First reports suggest that some older buildings sustained mostly minor damage, though the Washington Monument is closed because of visible cracks. Nothing much seemed to have been affected at the Arboretum, though, along with all other government installations; we closed for the day. Horrible traffic, cell phones inoperable due to overload, and general disorder astronomically out of proportion to the small tremor we experienced no doubt make us look foolish to the Left Coast. Oh well.

It did interest me that, as like last summer's small quake, no potential mechanism or causal circumstance was suggested by the experts to explain why an earthquake would happen here. I do remember while studying geology in college, hearing that there was a low level thrust fault subtending much of the coastal plain. Hey, the Atlantic is spreading and oceanic crust is heavier than continental crust. Incipient subduction zone? I don't know and the bad thing about scientists, and the good thing, is that they don't speculate a lot. I suspect that much research will begin now.

I love this banana that used to be Musella and don't really understand why it's now an Ensete. Carole promised to sent me the relevant paper. I'll let you know. 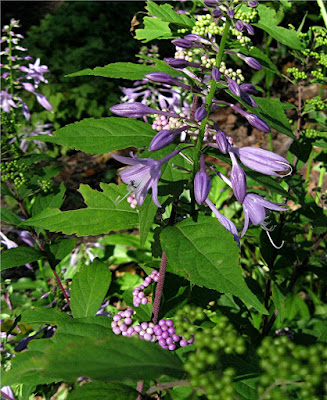 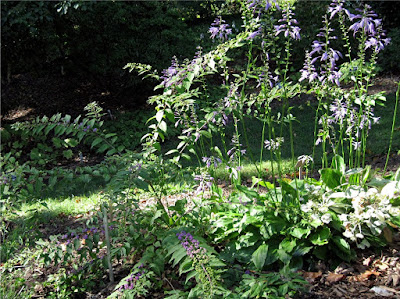 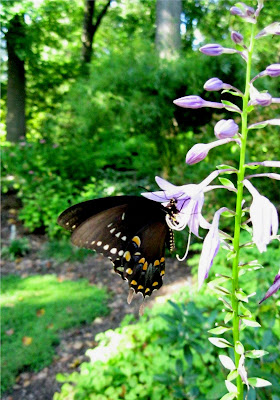 Barry Yinger, a past curator of the Asian Collections, collected seeds from this Hosta in 1985 on a collecting trip to Coastal South Korea. It was named for him some years later. This plant is labeled as being from that collection so that's cool. I don't know how many plants we have that were named for past Arboretum staff. I'll have to do research. Or ask Stefan.

There are a handful of species of Callicarpa including the North American native, C. americana. All are deciduous shrubs that flower on growth of the current season and produce berries in shades of purple, violet, or occasionally white. I grow the native plant both in our Adelphi garden and in the Florida garden. It's an incredibly tough plant and an important constituent of the dry understory in wild areas near the Florida garden. It grows larger than any of the Asian species. Of the Asian species, so far as I know them, C. dichotoma is the smallest, and so it may be possible to maintain it at the small end of this bed. For a few years I can cut it back completely since it flowers on new growth.

Kohleria x 'Clytie'.....look what I found hiding on the back deck. 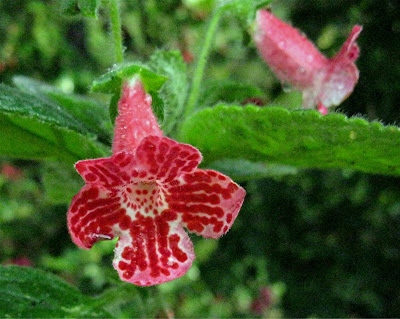 When I bought this for a dollar and a half? at the Beltsville Garden Club Spring Plant Sale, it was just a small rooted cutting in a 3" plastic pot. Not knowing exactly what to do with it, I stuck it pot and all, in one of our large mixed bowls on the back deck. I figured it would get enough water to survive and at some point I'd deal with it....Well I forgot completely about it till this week Karen pulled out something and there it was. It had more than doubled in size and was flowering. Go figure.

Because it's a gesneriad, the fuzzy leaves and colorful tubular flowers make sense. Ever a fan of the overstated, I love the brilliantly bicolored spots and stripes. There are apparently a number of species in the genus, formerly Isoloma, all native to Central or South America. I've read the name before but not seen a specimen previously. This appears to be an easy plant to grow and would seem to be a good candidate for a flowering houseplant.