The "upper" terrace of the Adelphi garden September 25, 2010....now that sounds overly pompous 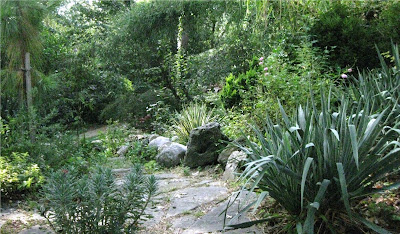 My motto, one of them anyway, is "if you clean your garden up for a tour or a party, take pictures before entropy conquers it again. We had a party last weekend so it still looks pretty good". Of course it will look a lot better if we actually get some rain this coming week.
Posted by ChrisU at 8:20 AM 0 comments

Orange in the September garden 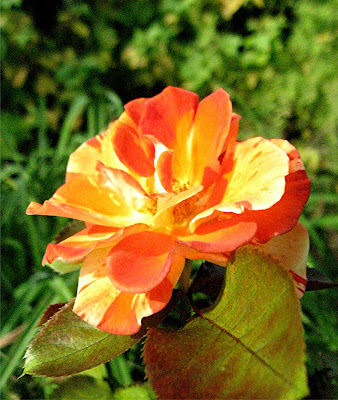 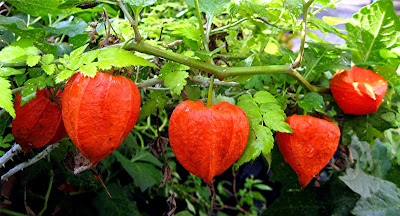 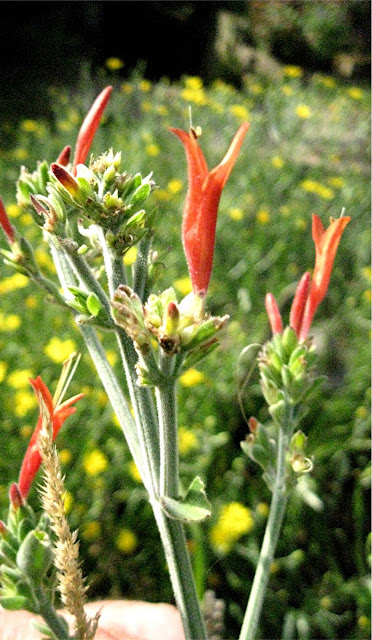 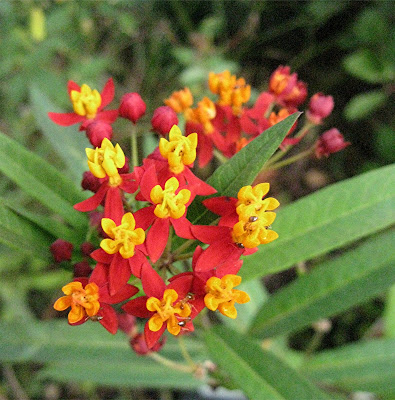 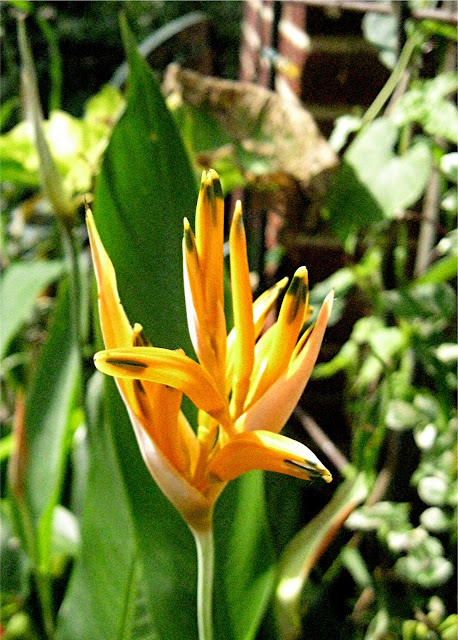 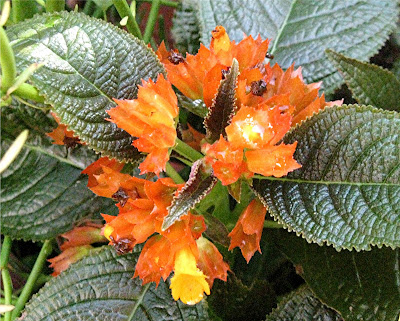 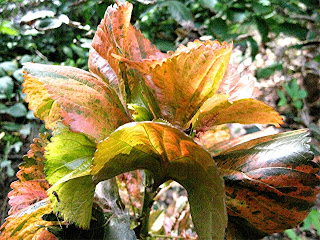 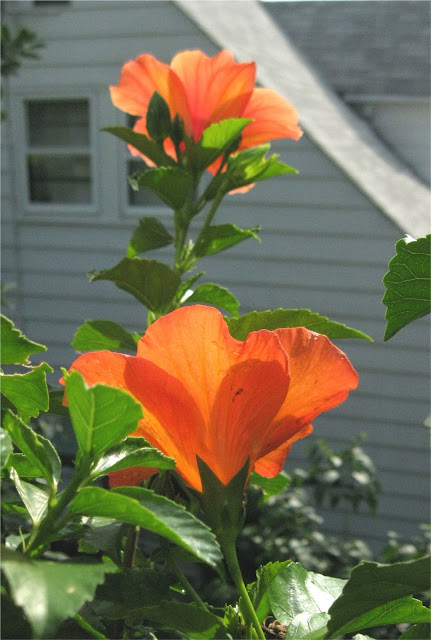 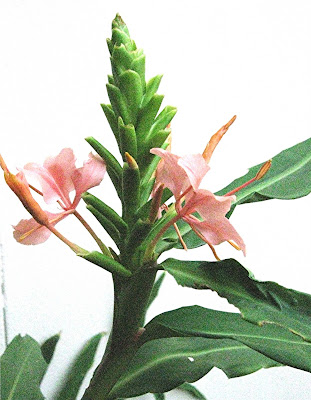 I like orange in the fall garden. Hey, who am I kidding? Everybody likes orange in the fall garden; I love orange all the time. It's so...so...so bright. It cheers me up; or maybe it's the tropical association as most of these plants are tropicals. They are, from the to down, Rose 'Oranges 'n' Lemons'; Chinese, or Japanese, Lanterns, Physalis alkekengi; Dicliptera suberecta; Asclepias currassivica; Heliconia psittacorum, Chrysothemis pulchella; Acalypha wilkesiana, Copper leaf, or better yet, Fire dragon; Hibiscus rosa-sinensis 'Florida dawn'; and finally Hedychium 'Elizabeth'.

The Dicliptera and the Asclepias are very marginal perennials here in Zone 7 but, of late, they are becoming more and more a sure thing. Thank you global warming. 'Oranges 'n' Lemons' is an easy "landscape rose" requiting only regular rose conditions. Chinese lanterns is an enthusiastic plant almost too enthusiastic. Mine happily shares a large container on the east-facing deck. It's been there four or five years. Hedychium 'Elizabeth' is a tropical ginger that's completely root hardy here. This picture was taken today, but not in my garden;   Mine is a week or so away. Elizabeth is a notoriously late-flowering cultivar.This plant is at the Beltsville Library garden where the space heats up more and likely accelerates floweringn. The others are strictly tropicals. Sometimes I winter them over, sometimes I replace them with plants brought back from the spring visit to the Florida garden. Chrysothemis is a gesneriad; it produces tubers so that you can dry it off in winter and revive it in spring. I truly love this plant. It flowers non-stop and retains its colorful bracts after the ephemeral flowers pass. Both bracts and petals are nicely set off by the richly dark foliage. Good plant.
Posted by ChrisU at 8:12 AM 0 comments 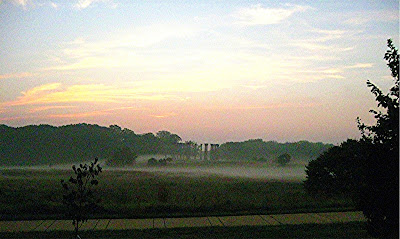 The cricket begged, but Nathan was strong and merciless 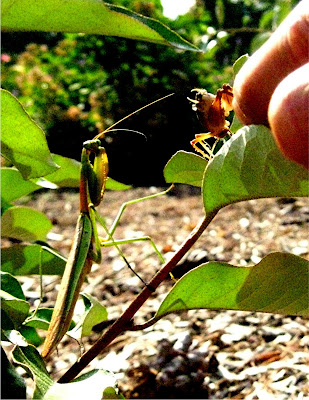 The mantis was merciless too  but her attack lacked accuracy; she lunged and missed. Nathan's finger paid the price. The cricket escaped in the confusion and lodged in a leaf axil. the mantis turned menacingly towards her potential prey. Outcome unknown. We had work to do.
Posted by ChrisU at 4:29 PM 0 comments 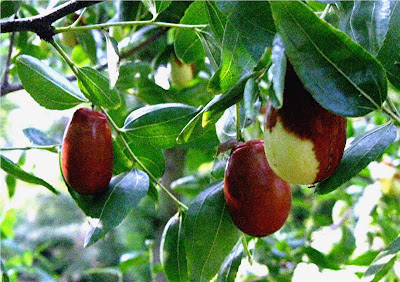 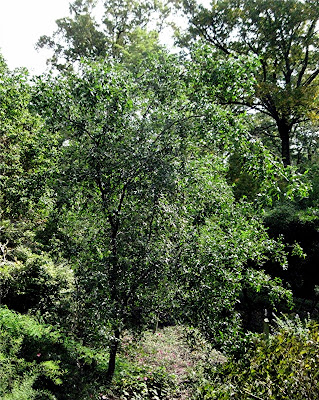 The fruits look like dates and when they begin to go soft, rot?, they taste a bit like dates. This tree is just behind the Acer griseum along the road at the main entrance to Asian Valley. We are about as far north as it can grow but there are a number of good-sized trees around the city. The fruits are definitely tasty. Where the tree is grown for fruit, from the Middle East to China, it's used in many ways; it's candied and confected, used medicinally, made into wine (China), and even used in teas.
Posted by ChrisU at 4:26 PM 0 comments 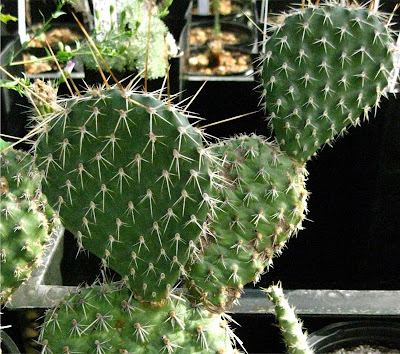 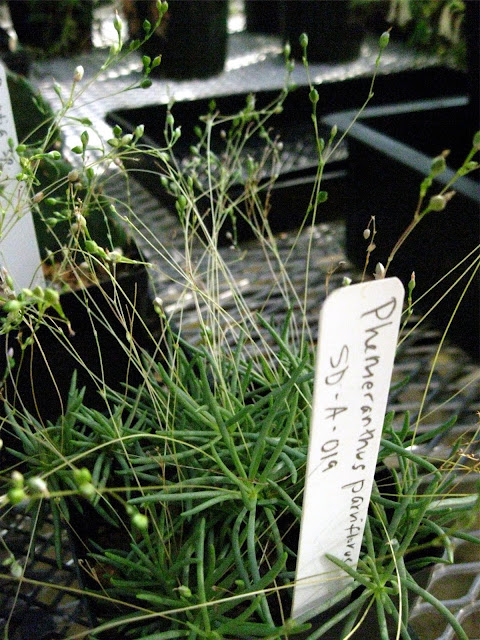 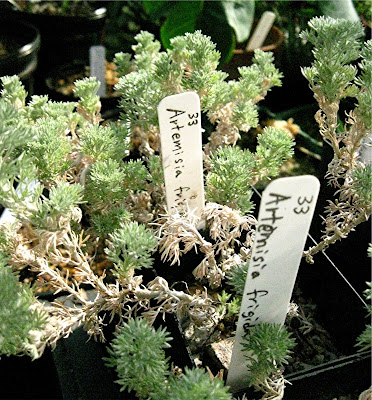 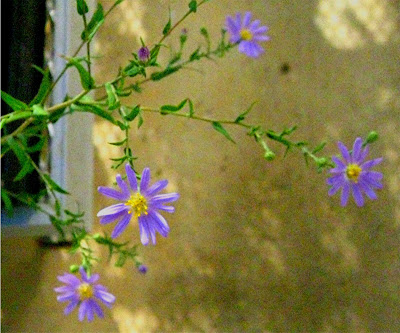 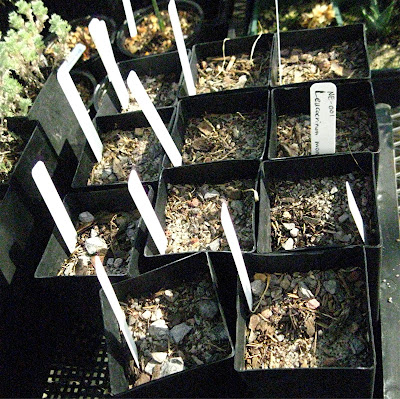 I've been intrigued by these guys ever since they appeared in the greenhouse; they are the plants that Scott, Kevin, and GrayC collected in South Dakota. The bulk of their collections were seeds so these are just a taste of what's to come. They collected in areas that experience extremes of heat and cold far beyond the norms of our area combined with low rainfall, and, as I understand it, some humidity in the summer. Potentially some of these plants could be added to the palette of green roof plants. Many of us are concerned that green roofs have become monocultures of sedums and iceplants. The roofs would be more interesting and attractive with more diverse planting, and monocultures make us all uneasy. While some green roofs are out of sight, others are highly visible to the point that they become roof gardens. In those gardens diversity of form, color, texture, and bloom is important.

Leucocrinum montanum, Sand Lily, (the empty pots in the last picture)  is a pretty exciting plant. It's dormant now but puts up grassy foliage in the spring and 2" white flowers in late-spring/early-summer.  Phemeranthus parviflorus, Prairie Fameflower, is my kind of plant; it's a tough tuft that blooma with an abundance of smallish pink flowers. The first plants I grew were desert plants and I'm still drawn to plants that can hold their own against adversity.

I've been working on a list of North American natives that could be useful roof garden or green roof plants. I'm happy to see Opuntia polyacanth in their collections. It's one of the most widely distributed prairie Opuntias and a beautiful cactus. In the east, we're used to O. humifusa, which is an attractive and tough. enough plant but lacks the beautiful spination and upright habit of O. polyacantha.The Aster, Symphiotrichum laeve var. geyeri is maybe not a roof garden plant but still beautiful and tough.  Artemisia frigida, Prairie Sagewort, is a smallish Sagebrush with silvery aromatic foliage. That would be cool in a roof garden! There are some exciting plants I didn't photograph including a dwarf xeric clematis with full sized flowers.
Posted by ChrisU at 3:08 AM 2 comments

Daybreak over the headhouse at the Arboretum 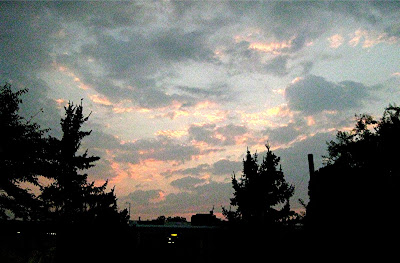 And so it begins....a few yearsof construction at the Arboretum 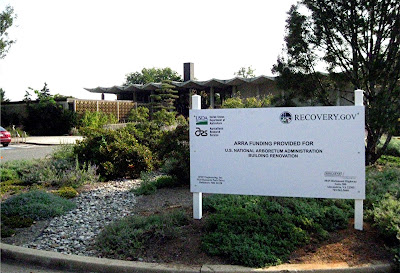 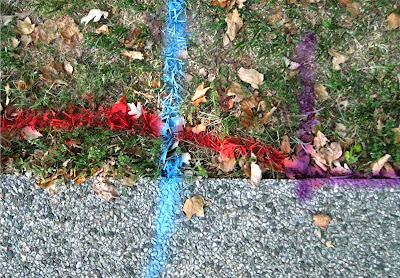 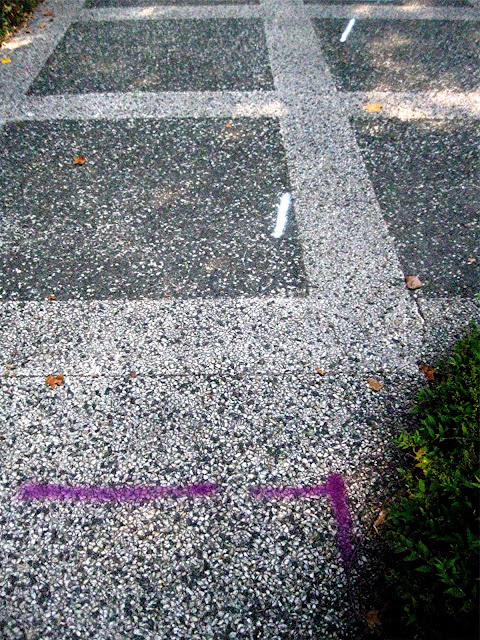 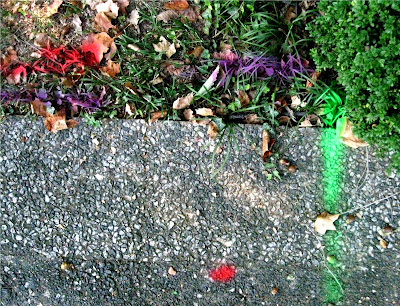 Stimulus money at work gutting and reconstructing the interior of the Administration Building at the US National Arboretum. First we put up the sign, then we mark the utilities....purple?
Posted by ChrisU at 3:13 PM 0 comments 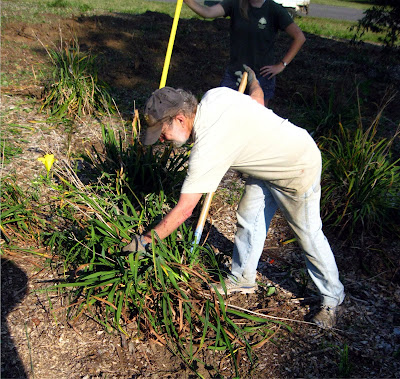 For Neal, lit by the morning sun,  it was ust a convenient was to take hold of the plant. Yesterday a half-day project cleared most of the material out of the cut-flower bed. The balance of the Korean Daylilies will go to Kevin Conrad who has a plan. The  Prunus mume were removed stumps and all Those iris that hadn't made the cut were removed. We graded the  sit and all that remains to be done is to kill the odd weed or two.
Posted by ChrisU at 1:52 AM 0 comments

Nathan isn't taking a break, he's waiting for Amanda to tell him whether we need this plant or not 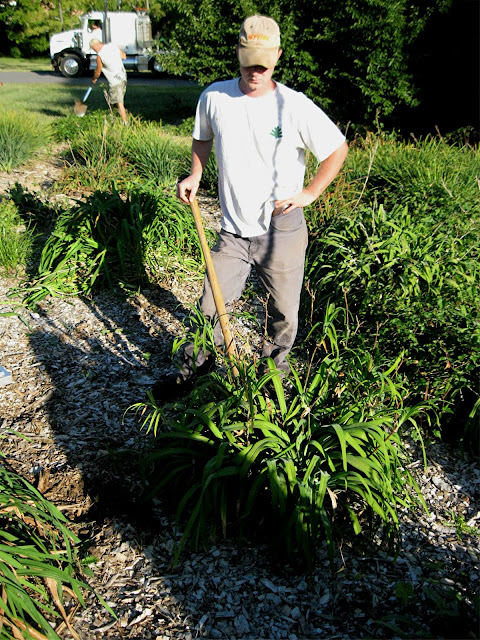 We were back at the Korean Daylilys and this time we had a system; we didn't go all willy nilly. Nate read label and dug sometimes, Amanda checked whether we needed the plant, I wrote labels, and Neal cleaned the divisions and put them in flats.

We stayed organized through the planting and record-keeping part of the project as well. Amanda wrote labels, I wrote log pages and followed Pat, Neal and Amanda while they planted. Amanda had the inspiration to plant them around the rocks beside the road near the large weeping Katsura so there's a bit more sense and structure to our planting scheme this time. Plus a good number of the plants will be easily accessible in a relatively small area. And, not least importantly, they'll look good against those rocks and add a repetitive visual element to the garden while in flower. The morning went well!
Posted by ChrisU at 3:06 AM 0 comments

Bamboo and the Anacostia River at the bottom of China Valley 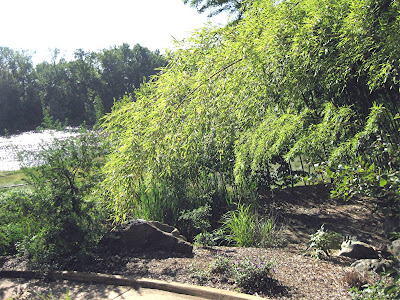 Summer is so much about the heat I forget that gardens are really about the light! The river  sparkled Monday and so did the arching cane of our big bamboo. It's a great bamboo. While cleaning it up this spring we cut a few pieces fully 5" in diameter. The photograph doesn't show it but this cane is rooted at least 40 feet away on the facing slope; the entire culm moves constantly in the wind gracefully inhabiting what would otherwise be a troublesome void.

Ever the obsessive gardener I have already checked the weather forecast this morning (Tuesday 5 am) and see that we are looking at 3 more 90 F degree days this week. That sounds worse than it'll be miserable but,. so long as nighttime temperatures fall into the 60's or low 70s hot days aren't so bad; the short days and low humidity of late September ensure this nightly cooling. All 90 degree days aren't the same; the air is drier now which makes heat less oppressive and the ground and building and trees and vehicles all cool at night so that when you move into the shade in the afternoon its often comfortable. In August when I walk out the door on my way to work the bricks of the house are warm to the touch. I'm shivering now sitting at an open window.

Low humidity is a godsend to us; not so much so for the plants.Transpiration rages and new or shallow rooted plants are stressed. In another few weeks to a month, temperatures will fall and rain will fall (we hope). Then we'll be able to do our fall planting and transplanting.
Posted by ChrisU at 2:56 AM 0 comments 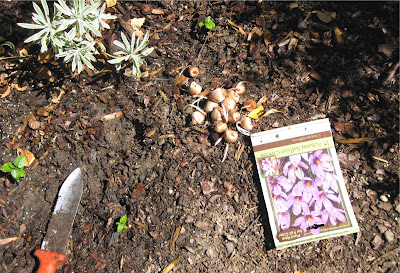 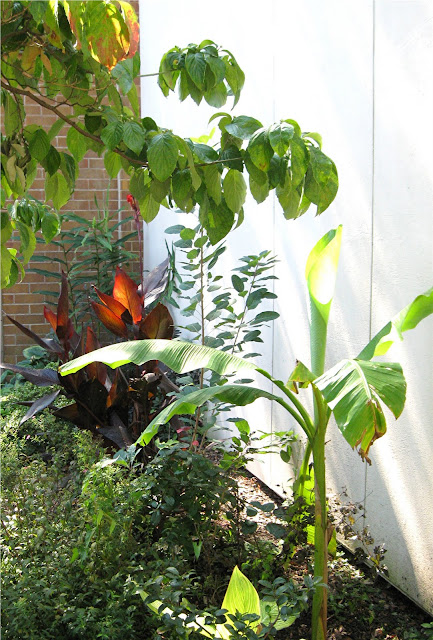 I planted two bags of Autumn Crocus, Crocus speciosus, and a 'Black Lace' Elderberry, Sambucus nigra 'Black Lace'. It's a relatively new selection with almost black foliage. It ought to be great against this beigh "stucco type" wall. Actually it's on the wall facing this one. In order to make room for it I shifted the Fothergilla 'Mt. Airy' around the corner against the north-facing brick wall. I moved the Wax Myrtle, Morella cerifera off that wall to a sunny west- facing site. The Bayberry will be happier, the Fothergilla will look fine with a brick background and the ebony tracery of the Elderberry will have a complementary light background.

While I was at it, I flipped five Sedum 'Autumn Joy' for five Salvia nemerosa 'May Night'. The Salvias weren't getting enough sun and the Sedums were getting too much. It's a giant improvement.

In addition to the Crocus and the Sambucus, I planted three old rose selections: Champney's Pink Cluster, 'Little White Pet', and 'Little Pink Pet'.
Posted by ChrisU at 2:36 PM 0 comments