Litte River Canyon: Lynn Overlook: There's something exciting about plants that have to deal with adversity! 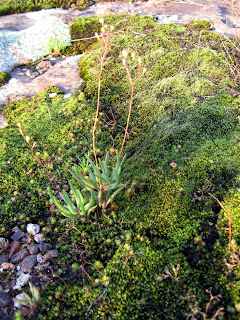 The Little River flows its entire length on top of Lookout Mountain; the rock of the falls and the exposed cliffs is a Pennsylvanian sandstone of the Pottsville Formation that overlays a thicker limestone sequence. Sandstone is a rock much more resistant to weathering (both physical and chemical) than limestone . Most waterfalls are sandstone, lots of cliffs are sandstone, and most arches are sandstone. The road here actually splits around a peculiar erosional formation, "Mushroom Rock."

The area around Lynn Overlook includes one of my favorite types of plant communities.The plants subsist on thin soil, gravel, or on the sandstone itself. They are tough xerophytes, mostly small by nature, further dwarfed by circumstance. Opuntia, talinum, schizachyrium, liatris, senecio, mosses, lichens among others, produce a tapestry of texture and subtle color whose effect was only enhanced by the early morning light. The overall appearance and the plants themselves were similar to what we had seen on the dolomite glades farther south but these on Lookout Mountain were not limited to species able to deal with levels of magnesium that would be toxic to most plants.

We wandered down a trail and across the road and encountered yet another wonderful plant association; the topography was such that enough water accumulated to allow the growth of Sphagnum, Polygala, Gerardia, and a vaiety of wetland species. As ususal we didn't locate the pitcher plants. I think I could spend the rest of my life studying the plants on an acre or two here. Wow.
Posted by ChrisU at 10:34 AM 0 comments 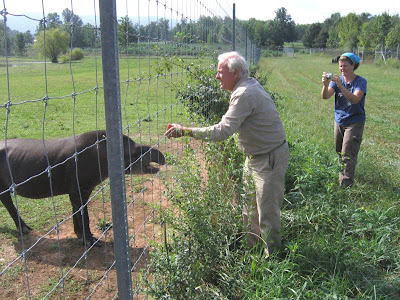 If I showed you a picture of Anniston Army Depot, they would have to kill me so this is Little River Falls, our next stop 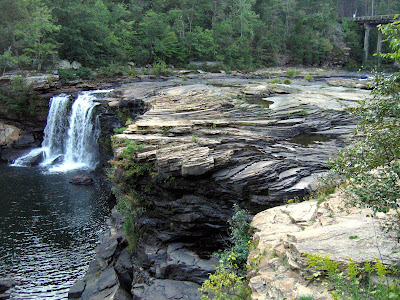 We spent most of the day at Anniston Army Depot still collecting seed. We got seed from Short-leafed Pine, Pinus echinata, a plant I like a lot for the Washington, DC area; there are two in the National Grove of State Trees (they are the state tree of Arkansas) and they have been beautiful for the last four years. This is a timber tree in the south but seems like it would be a good landscape specimen in the warmer parts of Zone 7.

We also collected an unknown Holly, that we tentatively believe to be Ilex longipes. It is a beautiufl deciduous plant with large, shiny, longstemmed, red berries. Beautiful.
Posted by ChrisU at 8:38 PM 0 comments 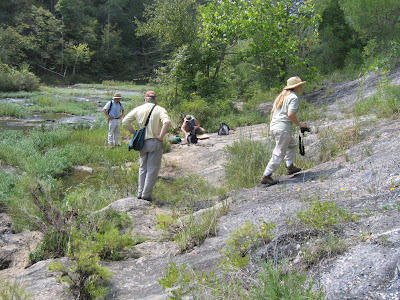 We collected along the Cahaba River in Bibb County Alabama on Wednesday. Incredible plants. We saw most of the recently discovered endemics and collected seed from some of them. The Spigelia gentianoides var.alabamensis was obligingly but inexplicably in flower.

More later!
Posted by ChrisU at 4:09 AM 0 comments 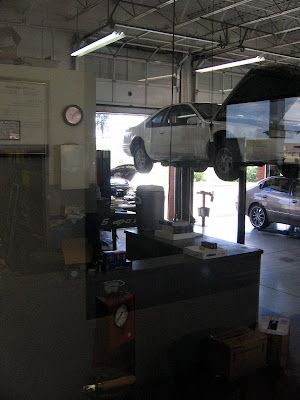 Joan and Amy and I left the Arboretum this morning bound for plant collecting in Tennessee and Alabama; signs were mixed. The van wouldn't start out of the parking lot and a quick look suggested it still had its original battery which would be about 9 years old. We jump started it and stopped a few hours later to buy a battery. Good plan, it turns out. It took less than a half hour to buy the battery and have it installed. Traffic was great, the weather was fine and we got to Chattanooga by 8:00.

With three drivers, four if you count Joan twice, there's plenty of down time on a long drive so I amused myself with The Roadside Geology of Virginia, one of a cool series of guides that describe and explain local geology in terms of what's visible from a moving vehicle. I have a few of these guides and highly recommend them; with more lead time, possibly I could have covered the area south of Virginia, but hey, its sort of more of the same! Paleozoic sedimentary sequences including lots of Limestone, and the odd exposure of Grenville (pre-Cambrian) metamorphics.

These are old mountains trending NE/SW folded, refolded, peneplained and reeneplained, intruded multiple times. They are complicated but scenic. Three orogenies not to be confused with erogenous. I will have to bring back a rock, but the choice will likely be difficult.
Posted by ChrisU at 9:09 PM 0 comments