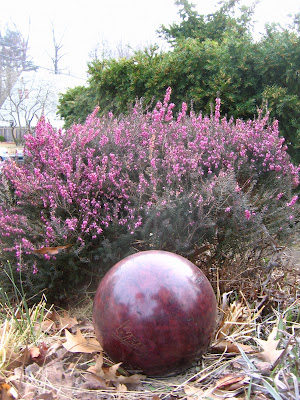 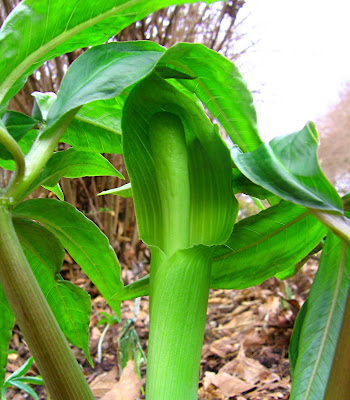 If there's one thing I remember from my first term in the Asian Collections, it's Arisaemas. Actually that's not one thing, it's a lot of things! We had a lot of Arisaemas: in the collection, in pots in the greenhouse, in small seed flats and large seed flats, and in a constant influx of seeds that we meticulously sowed. I remember once, probably about this time of year, some species, I forget which, had prematurely pushed out of the ground, and with temperatures predicted to drop into the mid-20s, we covered dozens of plants with upended 15 gallon nursery pots and mulch. Why the universe would allow me to remember this and not the outcome I cannot begin to imagine but I assume everything worked out all right. As it doubtless would have without our intervention. Oh well.

This is the first Arisaema I have seen this year and it is barely open. And when I look at the label, there's Larry's name, Lee that is. I may have planted this plant but I don't remember it.
Posted by ChrisU at 3:09 PM 0 comments 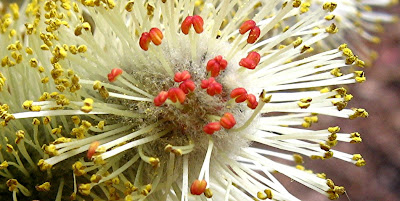 You really have to click on this one to appreciate its absurdity!
Posted by ChrisU at 3:06 PM 0 comments

Epimedium lishihchenii: comes through a tough winter unscarred and Hey! what would you expect to find under a Tree Peony? 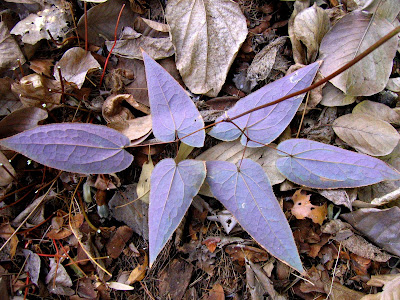 Epimedium lishihchenii was collected on the 1994 NACPEC trip to Wudang Shan, of course, in China. It is the second species I have observed to have come through one of our more challenging winters completely unscathed. I photographed it upside down because of the pleasant purple suffusion...it's the little things!

I have been leaning up the Tree Peonies since their buds are swelling. I break off the petioles and prune away suspect shoots. I always remove this debris and throw it away (I don't compost it!) since Peonies are so prone to systemic fungal problems. The flower buds on diseased shoots are much smaller than those on healthy shoots. The diseased stems themselves appear thinner and less vigorous. I found this seedling growing curiously with the seed elevated almost an inch above ground!
Posted by ChrisU at 4:40 PM 0 comments

Magnolia zenii...I can't help it, you get two pictures for the click of one! 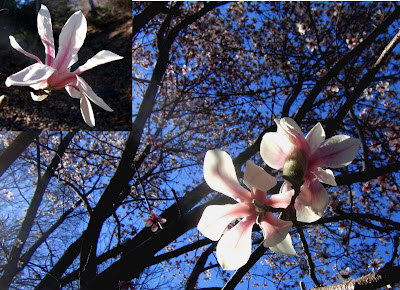 This rare endemic originally entered the US in 1980 as a gift of a small number of seeds from the Director of the Jiangsu Institute of Botany and Botanic Garden to two visiting botanists from the US, Steven Spongberg of the Arnold Arboretum, and Ted Dudley of the USNA. Our seeds produced two plants that were recently planted in the ground when I arrived in 1992. One was planted in a swale and the soft ground eventually resulted in it's falling. I staked it and it came back for a while (it was alive when I left), though Asian personnel tell me that it eventually did fall for good. The other plant, the one pictured, is planted at the base of a ~north facing slope in fairly good soil. It has clearly flourished and is now over 50 feet tall. Most of the flowers are high up in the air but this one hung low enough for me to photograph up.

The flowers weren't open last Friday and judging from their condition, I would guess that they began to open Saturday. There are half a dozen species or cultivars of Magnolia open today, a handful of Cherries, and all of the Flowering Apricots. It was a fragrant day in the gardens.

I remember Ted Dudley from my previous stint at the Arboretum; I would have liked him even if he hadn't used his position as an Editor for Timber Press to allow his USNA co-workers to purchase Timber Press offerings for cost. If I reach my hand out now, I can touch Krussmann's three volumes on woody plants that I would probably would not have been able to afford at full price.
Posted by ChrisU at 4:14 PM 0 comments

Crocus tomasinianus: I have heard people call this weedy, but really..... 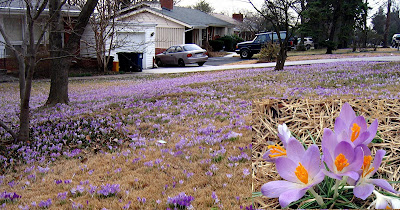 I have lived within a few blocks of this drift of crocus for almost 25 years and I still look forward to it every spring. They are tough little plants; the zoysia doesn't even faze them. About a block of houses on Riggs Road just where it diverges from Powder Mill have some amount of these in their yards. This is a particularly large and thick section. Obviously it spreads by both corm proliferation and seed.

Crocus tomasinianus, actually sometimes called "Early Crocus" is an eastern European species, and clearly a good choice for naturalizing. Possibly we should exercise caution naturalizing near wild areas, but I expect that there is no much harm in this planting in the middle of suburbia.
Posted by ChrisU at 8:02 AM 0 comments