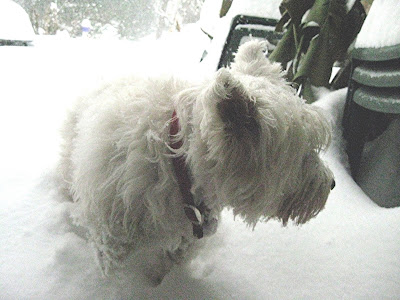 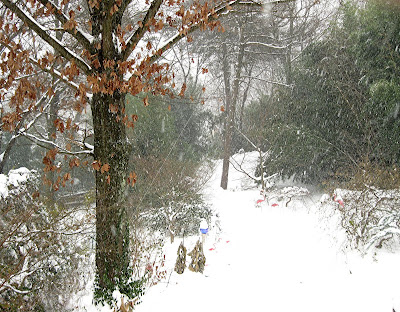 Jingles enjoys the snow with some reservations. Apparently it's more fun if the snow depth is less than her height, though she did barrel through a drift or two. Karen and Peter had a job scheduled for this morning, tieing up boxwoods to prevent snow damage. They moved it to yesterday afternoon. Good call!

In general though, as far as plants and gardens are concerned, I like heavy (accumulations) of light (dry, fluffy) snow. It's a good insulator, keeping roots at 32F and doing a bit to prevent heaving of perennials and premature growth. This is a good storm. This snow is light and fluffy so it won't break branches. We aren't technically in a blizzard, but we have had winds up to 30mph, snowfall at 3"/hour, with  a temperature of 25F. The winds prevent enough snow accumulating on evergreens to do any damage. All I'm doing is adding logs to the fire.

I've never driven away from deep snow to go to Florida, but I think I can handle it. We're going down this week and I'm pretty excited. The winter visit is always fun because it's been raining regularly since the last vist (in July). There'll be weeds, but the plants will have grown nicely and a number of them flower heavily this time of year: Odontonema stricta, Schizostylis coccinea, Cuphea micropetala, Osmanthus fragrans, Kalanchoe blossfeldiana, Aloe saponaria (a hummingbird magnet), et alia. Others will have some flowers. I erected a couple of trellises last trip; one for a Bougainvillea, and the other for Lonicera sempervirens. The plants ought to have made good strides towards concealing their new supports.
Posted by ChrisU at 10:45 AM 0 comments 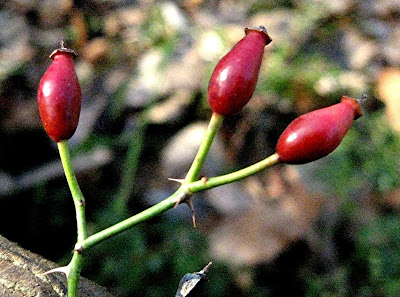 I have read and reread the literature without really understanding the relationship between this and Rosa wichuriana. I think that R. luciae and R. wichuriana are synonymous but that begs the questions of variety luciae. Our rose, like Wichuriana, is a prostrate scrambler, rooting readily as it creeps, that flowers in late summer through early winter. The plant itself is frightening in its vigour and the ease with which it sends down roots, but the hips are nicely urceolate and a pretty glossy red.
Posted by ChrisU at 3:30 PM 1 comments 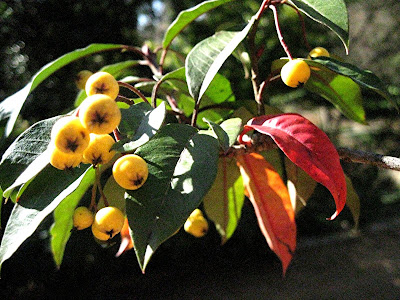 This medium sized evergreen shrub leaps out in winter; the foliage is mostly green, but yellow fruit, and the occasional scarlet leaf or two make it hard to miss. This plant is on the uphill side of the path that leads from the Davidia to the Chimonanthus overlook.
Posted by ChrisU at 2:49 PM 1 comments 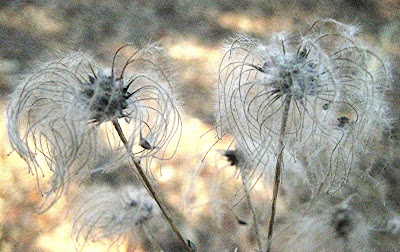 Amanda cuts back Japanese Anemones with the new reciprocating saw 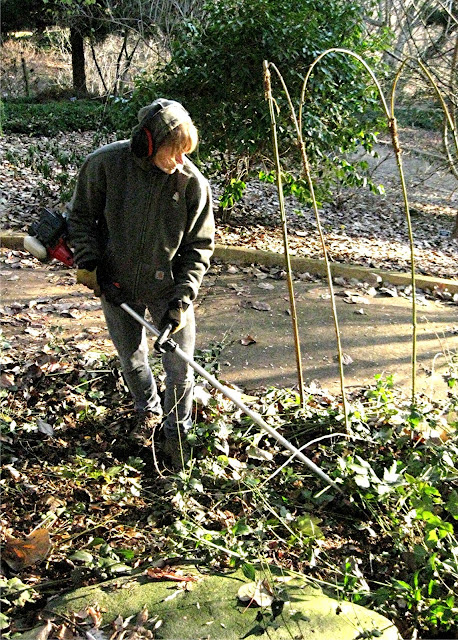 It's like a string trimmer but instead of whipping with a nylon string, two blades that look like large gears chop fiercly with a reciprocal motion. It cuts fairly cleanly and we don't have to get down on our knees on frozen ground. I like that part. Amanda chopped, I raked, and we did what would have taken three people most of the day in three hours.We like anything that allows us to do more in less time.
Posted by ChrisU at 2:33 PM 0 comments

Quercus falcata outside Fern Valley Prairie...it's a big one 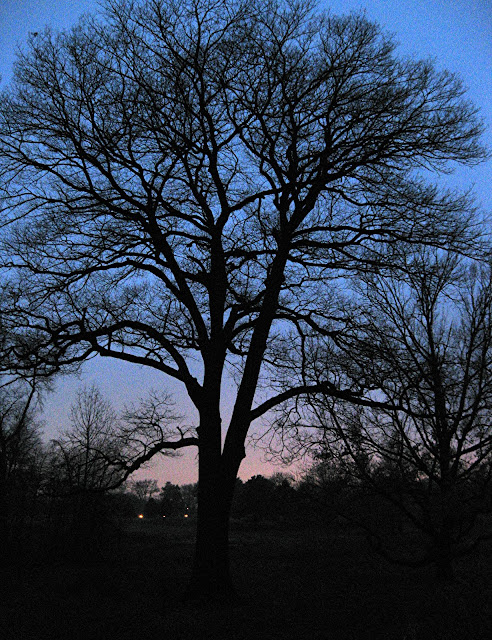 I like this tree a lot. Spanish Oak has a fairly distinctive profile. Since the camera is pointed SW, we know that the rosy pre-dawn glow isn't the sun below the horizon; it's the artificial lighting from downtown Washington.
Posted by ChrisU at 1:34 PM 0 comments

Tillandsia usneoides is ready to take on another Washington DC Winter 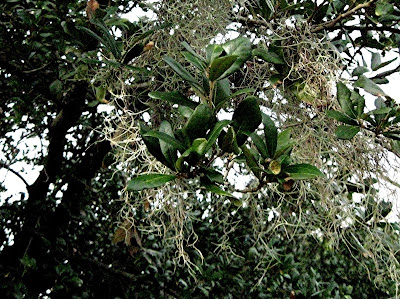 Jeanna and I planted….well we tucked actually, the Spanish Moss into branches of the Live Oaks in the National Grove of State Trees mid-summer 2008. They lived through last winter which included a few nights of single digit temperatures (Fahrenheit).


Generally, when it’s given a hardiness zone rating, Tilia u. is rated a USDA Zone 8 or 9. Widespread throughout the south, there are regular references in the literature, to its occurrence in Maryland though its more likely to be encountered in extreme SE Virginia.  After years of observation, my, untried, conclusion/guess is that while temperature is definitely a limiting factor,  a lack of winter moisture is what really draws the line.


During winter visits to the Florida garden, I noticed that a combination of unfrozen water, humidity, and nighttime temps that regularly drop below the dew point without freezing, combine to produce heavy heavy dews. It isn’t unusual for the windows to be opaque until the sun dries things out. Regularly Tree frog tracks in odd arcs, ornament the sliding doors. It largely evaporate later in the day, but every morning all the plants including the Spanish Moss are dripping wet. These conditions coincide with the dry season, dry in the sense that it doesn’t rain. Still, moisture is moisture. 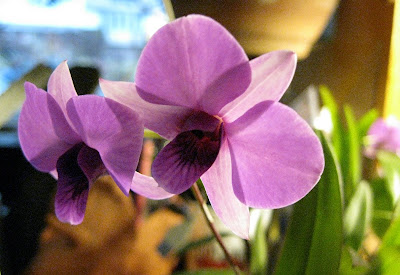 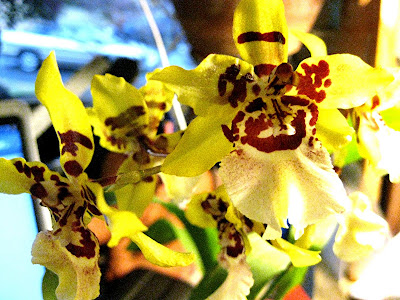 The top plant is an unnamed Dendrobium, w/ 'Fire Coral' as a parent. It came from a NCOS (National Capitol Orchid) show three years ago. I've long since lost the plant label, but materials science being what it is the adhesive sticker on the side of the pot with the price ($20.00) is still in perfect condition despite being watered at least 200 times. Wow. The yellow and brown flower is...well I don't know what it is; maybe an Oncidium? It came from a Flea Market in Florida and cost 3$ about three years  ago. It was likely a culled plant from a cross. Flea Markets are good outlets for the 995,996.997?  seedlings out of a million that don't make the cut.  Still, it's a nice plant.
Posted by ChrisU at 2:58 PM 0 comments