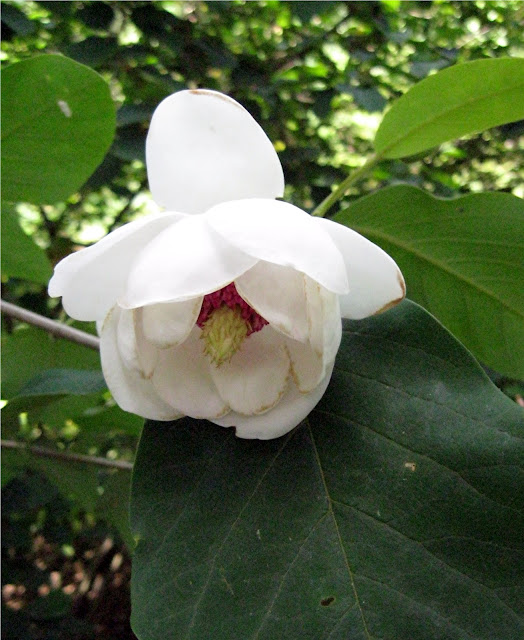 Had weekend watering today. After two days of low humidity and high winds there was a lot to water. Rewarded myself by walking through the collection on my way home. I love this magnolia. It's so subtle and umassuming compared to it's siblings. Who I also like.
Posted by ChrisU at 9:42 AM 1 comments 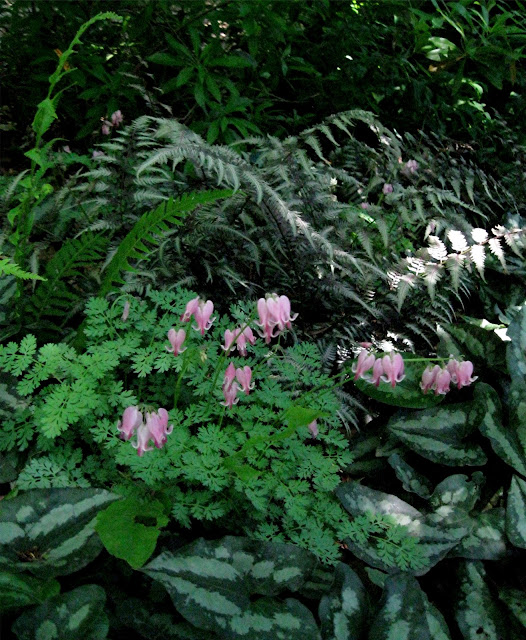 King of Hearts is a complex hybrid between D. peregrina (Japanese) and two North American species. It holds that lovely dissected foliage through the growing season, reflowering sporadically. In this planting, Nathan has combined it with Asarum splendens (variegated ginger) and Athyrium nipponicum pictum (Japanes painted fern). It's a great combination of foliage colors and textures; the dicentra blooms make it perfect. I only hope we can keep the asarum from eating everything up!
Posted by ChrisU at 1:21 PM 1 comments

Paeonia lactiflora, the species, growing in the Japanese Woodland at the US National Arboretum 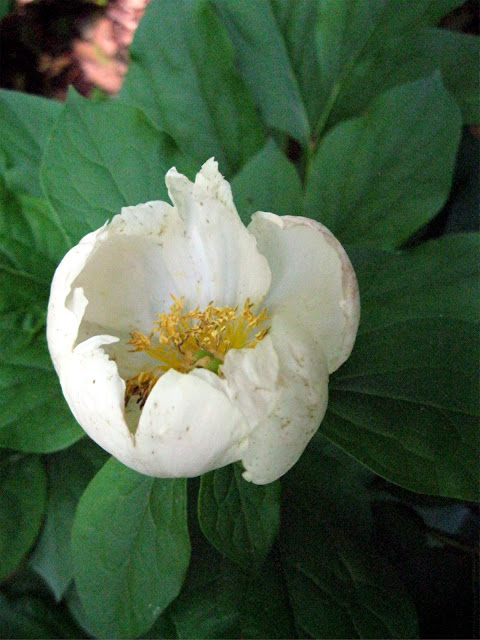 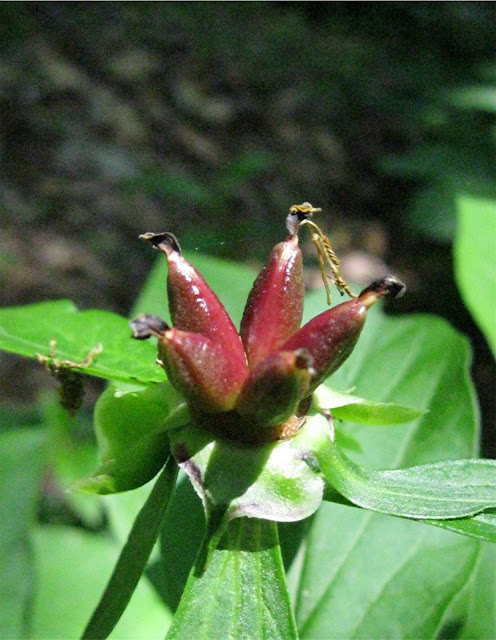 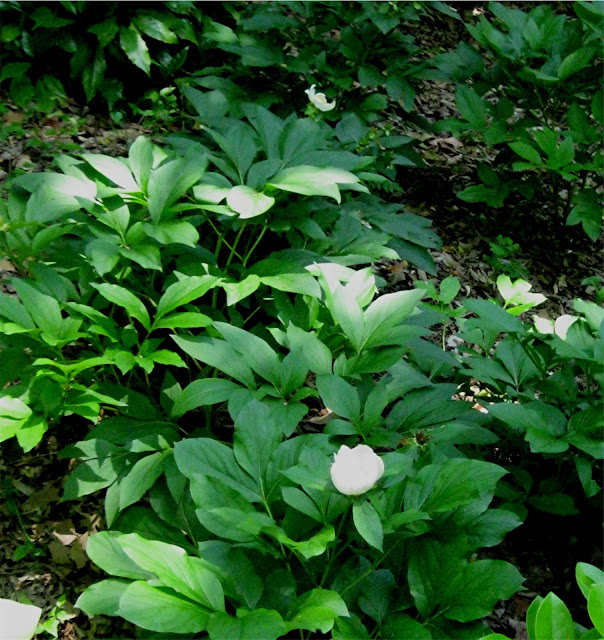 This species is the basis for most of our Chinese herbaceous cultivars. Many are quite colorful with a vast proliferation of petals. The species itself has a simple beauty.
Posted by ChrisU at 1:12 PM 1 comments 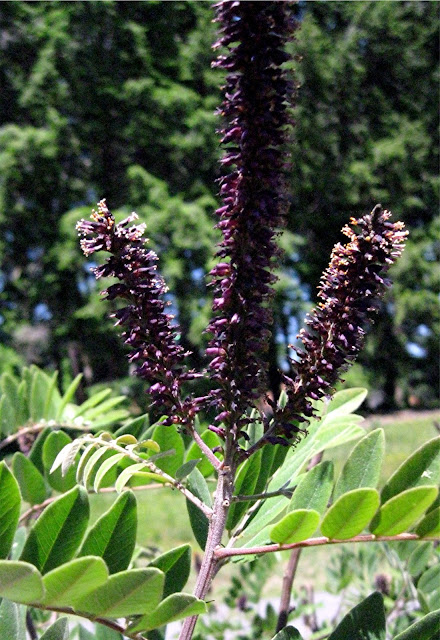 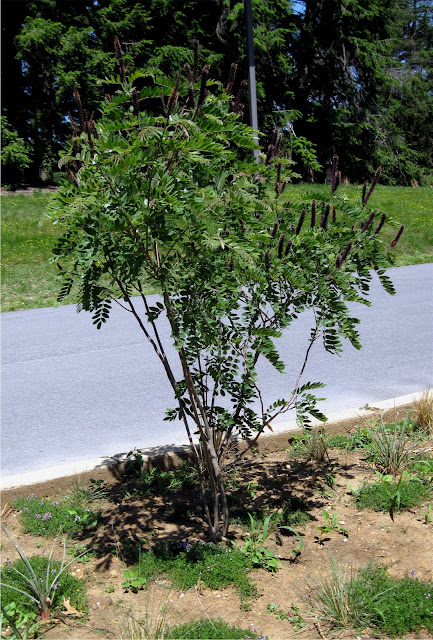 Native to Texas, Oklahoma, Louisiana, and Arkansas, this curious suckering shrub is in the pea family. Brad put three of them, seed wild collected by Ron Lance, into his parking lot island planting outside the headhouse. They are underplanted with Muhlenbergia capillaris, Hesperaloe sp., with the prostrate Thymus as a groundcover.  I offered him seedlings of Hieraceum villosum. I don't know whether he'll use them or not. It'll be a fun planting either way.
Posted by ChrisU at 1:02 PM 0 comments 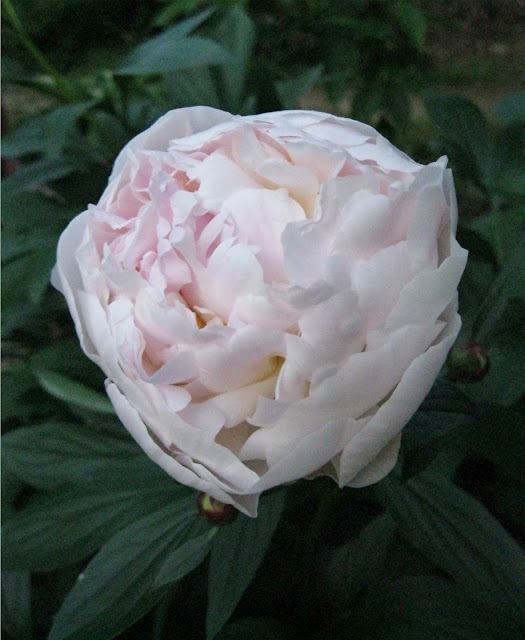 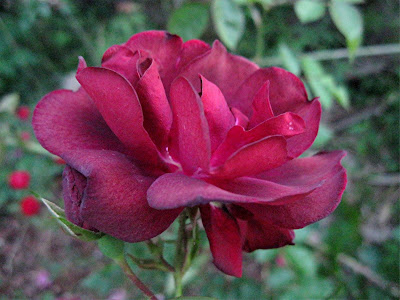 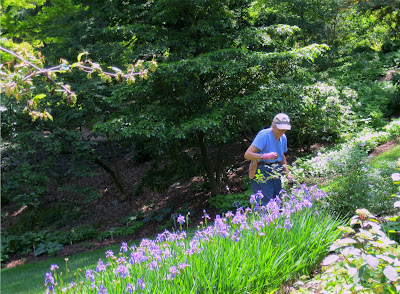 Last week Pat took a picture of some of us at the overlook. This week I took a picture of her deadheading the China Rose 'Hume's Blush'. The drift of Iris sanguinea is peaking right now.
Posted by ChrisU at 4:48 PM 0 comments

Acer campbellii subsp. flabellatum at the top of China Valley 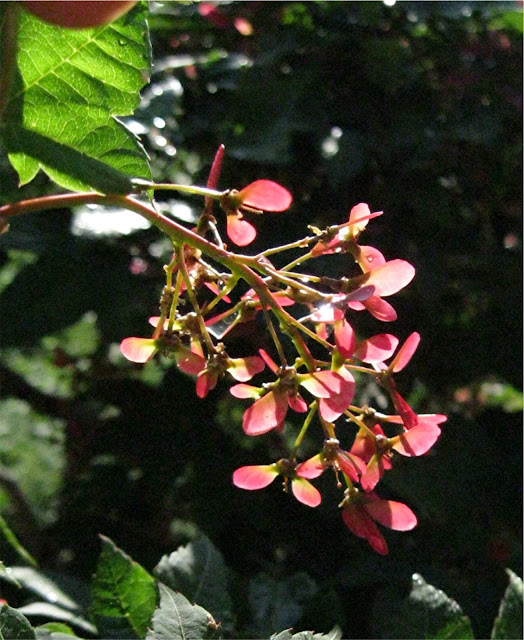 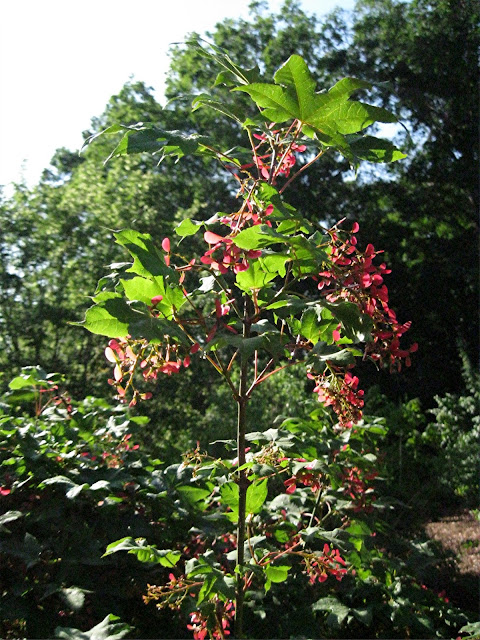 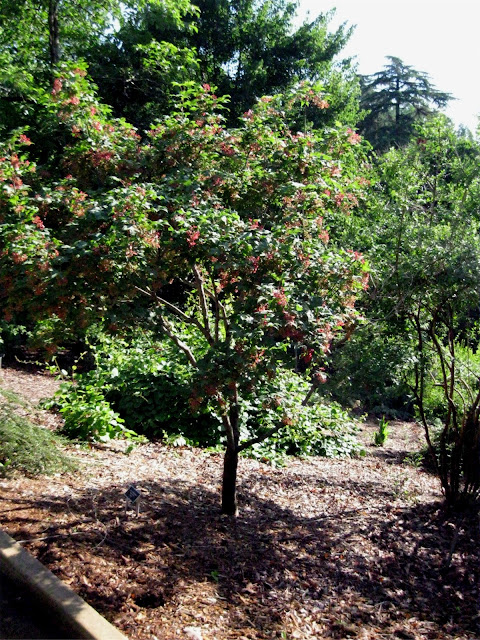 I admire the red samaras on this maple every year. If I had the room, I'd grow it in my garden just to watch the morning sun shine through them. Come to think of it, lots of maples have red parts at some time during the year and they all look good with the sun shining through them.
Posted by ChrisU at 4:40 PM 0 comments

Ain't she a knockout? 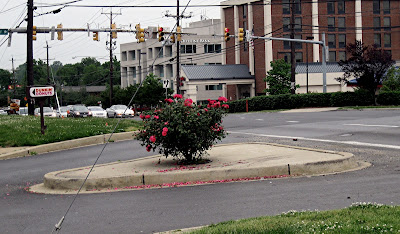 Of course she is; aren't 7 out of 10 roses knockouts? Still, it's cheerful and I admire the use of space. I'm standing at the door of our vet's office so I see this rose with enough regularity to know it's been there at least three years.
Posted by ChrisU at 3:28 PM 0 comments 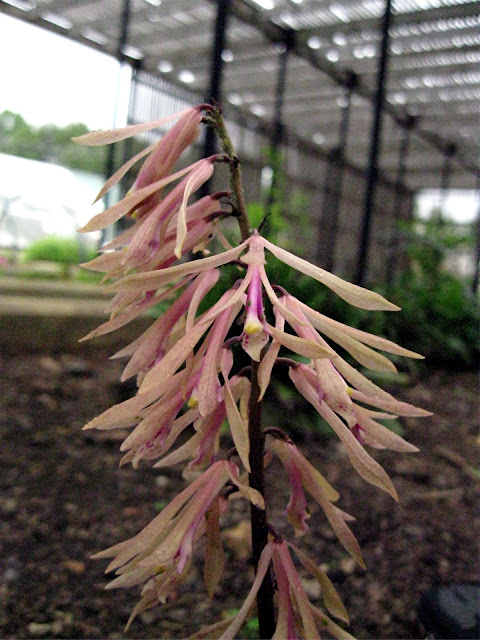 This is a terrestrial orchid from East Asia. We keep it in a lath bed in our production areas in the hope that someday it'll form a large enough clump to divide into pieces. Then we might risk planting one out in the Collection.

While looking for information on this very uncommon species, I happened into Shikoku Garden Rare Plant Nursery.  It's a Japanese Nursery with a great English language site. You will want all the plants!
Posted by ChrisU at 3:10 PM 0 comments 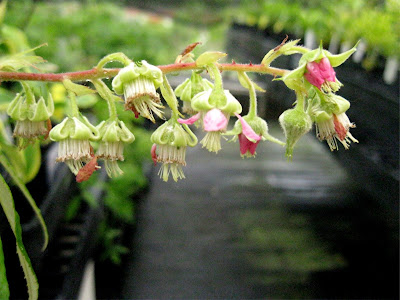 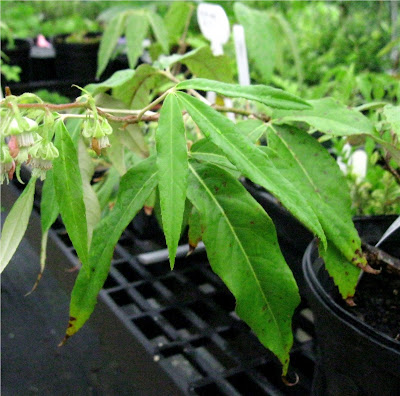 Pat Lynch donated this last year and it's still in the polyhouse. The floral architecture is undeniably interesting if not classically beautiful. The leaves are fun too, unusually shaped for a rubus. The literature tells me that it normally grows in stands of bamboo where the bambooesque appearance of the foliage combined with an ability to clamber up to 20 feet in the air, must allow it to insinuate itself convincingly into the bamboo. I'd like to give it a chance in some of our bamboo, but it is a rubus and they are "enthusiastic" growers. I'll plant it on one of the larger stands that's contained behind a root barrier. And keep an eye on it.
Posted by ChrisU at 3:01 PM 0 comments

Bed "J-1", bed one of the Japanese Woodland 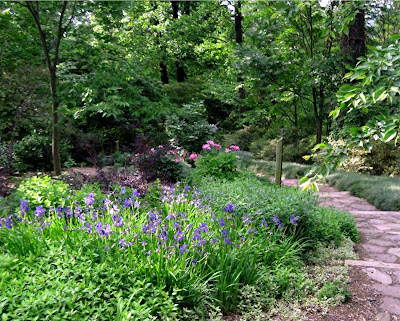 This end of bed J-1 has always been awkward. The bed adjoins the parking lot and so is one of the first things many visitors see.  Nathan has been working on it for 3? years, and it's starting to come around. The paved stairway helps; it replaced trampled grass and a steep eroded pathway with 12" high steps. The bed itself is obviously deep and not too long. As far as I can remember it's been planted exclusively with perennials and has always been a bit, well....wild and random. Nate has added some shrubsand a small tree and it seems to be heading in the right direction. I know the peonies and iris are beautiful today.
Posted by ChrisU at 2:47 PM 0 comments 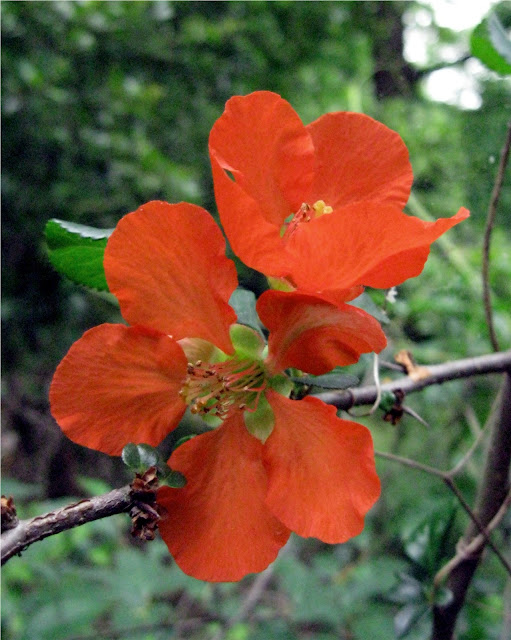 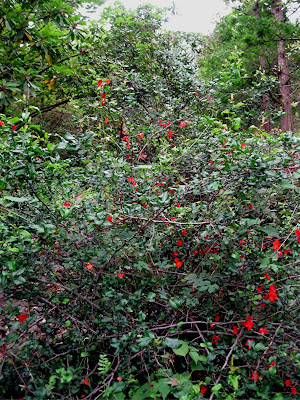 This quince lives way down in the Central Valley; it isn't really visible to most of our visitors. We worked around it today on our project and it's striking. The color is as advertised in the top picture. I am normally not a fan of warm reds (at least until they get to orange) but I'm definitely making an exception for these flowers. They're crazy. The label tells us that we got the plant from the Arnold Arboretum, and when I went on line looking for information about this cultivar I found an interesting article from Arnoldia. Apparently the plant...."originated as a seedling at the Clark Nursery in San Jose, California where it was selected for introduction into the trade in 1947." The Arnold got two grafted plants in 1950  By 1993, one of those plants had grown to 8' high by 15' in diameter. The plants we received came as own rooted cuttings. Almost twenty years later ours is 6-7 tall and maybe 6 feet across.

I'm not sure how I feel about quinces in the garden; they are plants that will take their space. For sure they belong in every old fashioned garden. Their root system is strong and the roots themselves are not as hard as iron, but it's not a plant you will relish removing especially if it has grown to any size. The flowers are wonderful; once vernalized, the branches are easily forced in late winter or early spring. Many of the colors are over the top. We just planted three new cultivars from Proven Winners with colors that can stand up to 'Mandarin'. Sometime they make those odd apple like fruits that I remember eating at my grandmother's table canned and colored green or red. The fall foliage color, well, there really isn't any and the form of the plant is acceptable at best. Still, there's something about them. It's good to have flowers in the winter, even the late winter. Just be careful where you site them. You can't stop of slow the growth; once you're committed, you're committed. Even with all those misgivings, I have to admit that I have planted a quince in our 1/4 acre garden, so I guess I must think they're worth the space!
Posted by ChrisU at 3:04 PM 2 comments

Project in the Central Valley today...at the bottom end of the watercourse 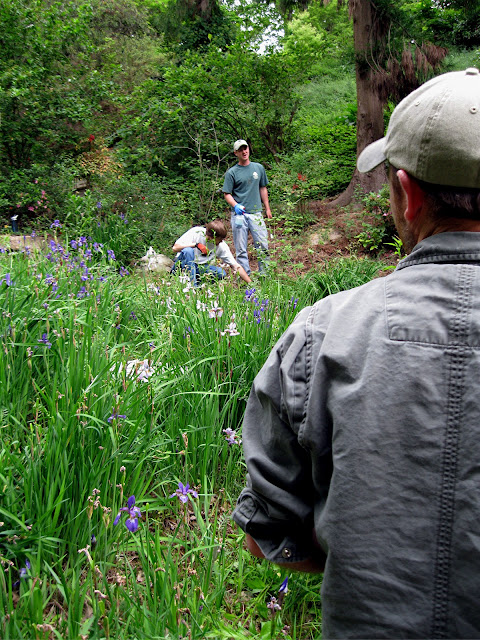 I think this is the third, or fourth?, time we've worked in the lower part of Asian Valley, ASRT's and Asian staff together. It's beginning to make a difference. This is likely the least well attended part of the entire collection. It's not visible from any normal viewpoint, most of the summer it's hot and steamy to the extreme, and there aren't a lot of plants down there that are of any importance that are in danger by being neglected for long periods of time. Not that this is how we'd like things to be. When we have more staff, we'll do a better job here, but in the meantime these twice a year projects seem to be allowing us to keep a handle on things, even make cumulative gains.
Posted by ChrisU at 2:43 PM 0 comments