Polyphemus Moth, Antheraea polyphemus.....it's turning into quite the Lepidopteran summer 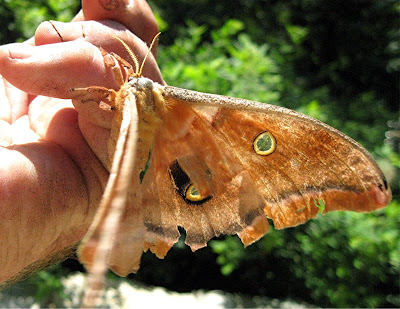 Butterflies are everywhere, not just on "butterfly plants". Walking through the gardens they flutter around your head and light on wet spots on the paths. The PiDolyphemus, of course, is a moth; working during the day we don't see so many moths and I'm afraid this one was on it's last legs. They look like flying Tarantulas close up with their giant hairy legs and body. Dirty fingernails just go with the territory?
Posted by ChrisU at 8:39 AM 0 comments

Lilium longiflorum, we see them more often in pots around Easter, but as long as they stay virus-free they're great garden plants 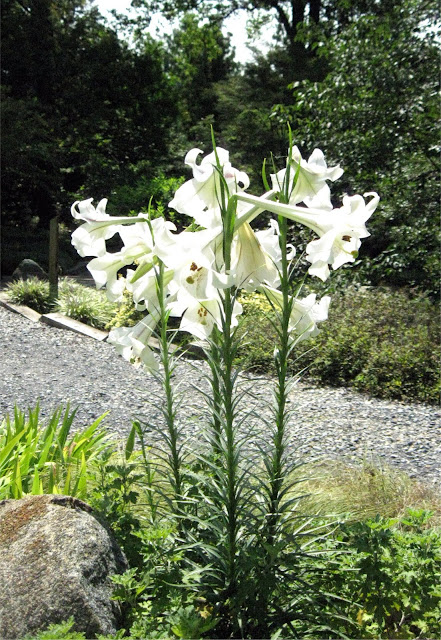 Somebody sited this plant wonderfully near the road in the Asian Collections. The sun lights it up all day and the shady background sets it off all day. It's great when plants can be made the center of attention like this but in any garden you can only create that situation a few times.
Posted by ChrisU at 8:28 AM 0 comments 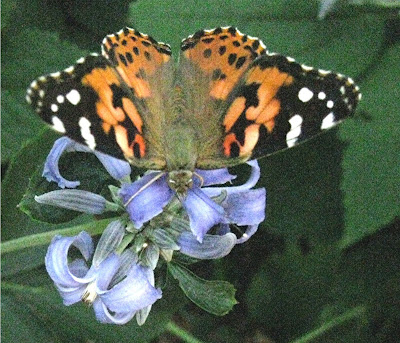 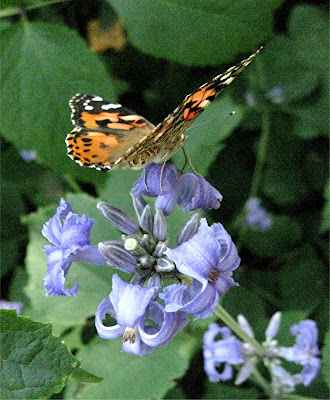 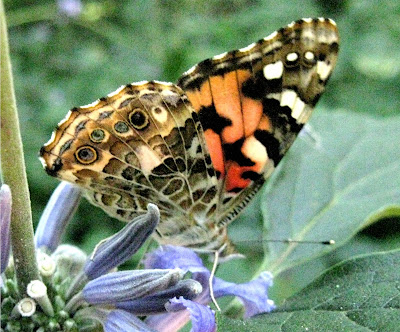 There are plants that I love but don't have any idea what to do with. This is not the typical vining Clematis; it has woody based stems that meander upward 2-3 feet and flop gracelessly. They are topped, in the summer with these beautiful blue flowers that really need to be viewed from a short distance.. The advantage of getting in close is that you are better able to appreciate what is one of my favorite floral fragrances. Who'd a thunk it? And the butterflies clearly appreciate the nectar.

This patch has been growing in the older section of the Asian Collections at least since the early 90's and has grown in so thickly that the relatively lax stems are able to support each other hence making a pleasant planting that flowers wonderfully in filtered sunlight.  Still, it's not much most of the year so maybe is better used in larger gardens. I put it into a number of designs when I first met it, but never really integrated it particularly well. Still....it's worth trying.
Posted by ChrisU at 8:11 AM 0 comments

Abelia chinensis.....when I get old, older, and less mobile I'm going to want to have some good nectar plants to attract butterflies 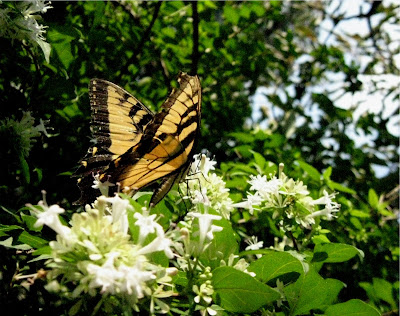 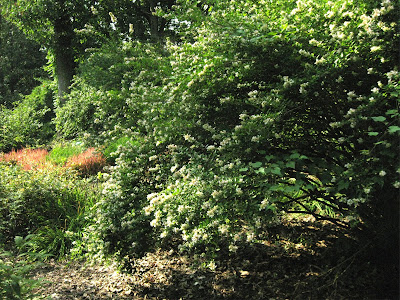 There isn't anything better than this plant. We have a drift of them in China Valley; they flower for a couple of months in late summer/fall and there are always butterflies and other nectgar feeders.
Posted by ChrisU at 3:10 PM 0 comments 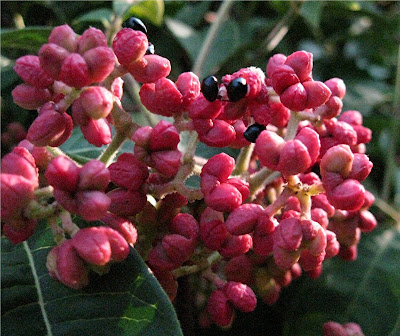 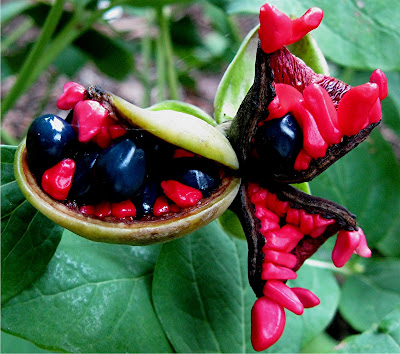 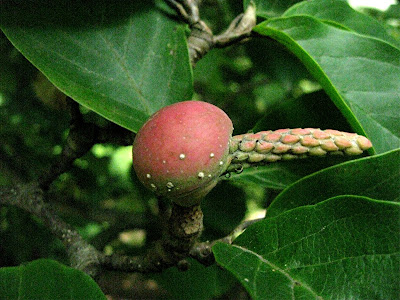 It's late August and many fruits are beginning to color up. Here are some nice ones!
Posted by ChrisU at 3:06 PM 1 comments

Plumbago europea....Stefan collected this in Azerbaijan. We're growing it just below the cut through path from China Valley from the Central Valley 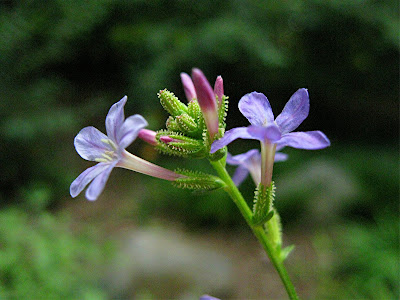 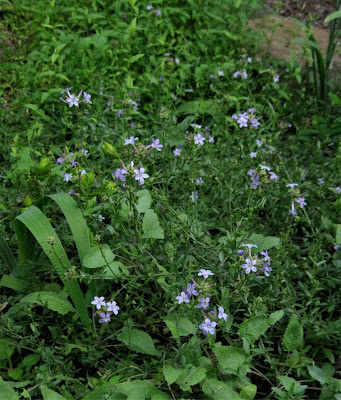 It's a pleasant and vigorous plant. The flowers are small but plentiful and the leaves are clean.
Posted by ChrisU at 3:03 PM 0 comments

Clathrus columnatus?....those eggs are what the aliens throw out of the spaceship 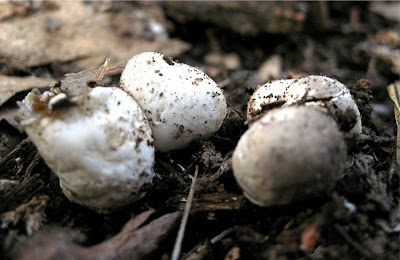 Then they hatch and the foul-smelling stinkhorn fungus hatches and grows out of the egg. Not really.

Neal and Amanda found these odd stinkhorns yesterday in the Hamamelis collection. They smell much worse than the more common Dog Stinkhorn.
Posted by ChrisU at 2:59 PM 0 comments

Amanda, Neal, and I worked at the intersection of bed 3 and 5 in China Valley this past Tuesday and Wednesday. We took up where Betty and Eugenia had left off last year. They started at the path and went about ten feet back and covered maybe 30 linear feet of path including the curve. The three of us worked from their area back into the winderness. It had been, without doubt, the most loosely maintained part of China Valley. It's hard to understand, much less explain, how areas like that happen and continue. It doesn't matter cause it's beautiful now. I found this caterpillar on a Corylopsis just as we were finishing up. I have no idea what it is but it has some impressive black and white bristles on it's posterior end.
Posted by ChrisU at 3:03 PM 0 comments 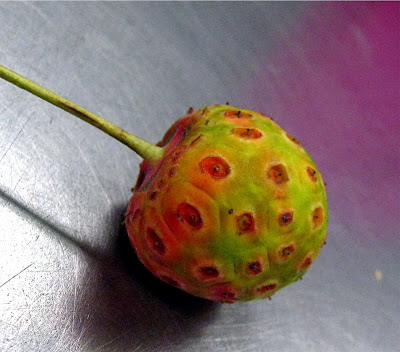 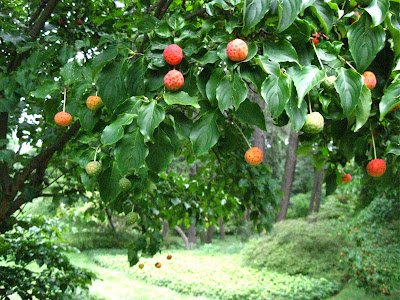 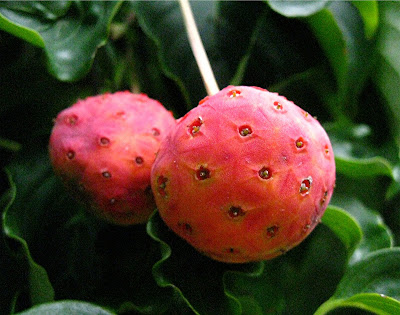 We started talking and he told stories of trees so full of ripe fruit that their branches sagged dangerously. And apparently some of the Kousas were even reblooming. I had to see it so I stopped by after work. It was as George had described. I ate a couple dozen fruit....good flavor, juicier than usual, but still with a distinctly mealy texture. On balance they were tasty. And Cornus kousa 'Gold Spot' was flowering as advertised; not just a flower here and there, but heavy with blooms. George says it has done this three years in a row and still retained enough buds to flower nicely in the spring. 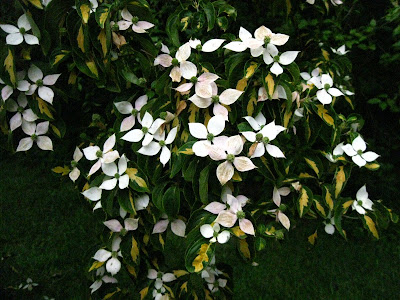 Smartweed caterpillars are a month earlier this year than last year..... Acronicta oblinita 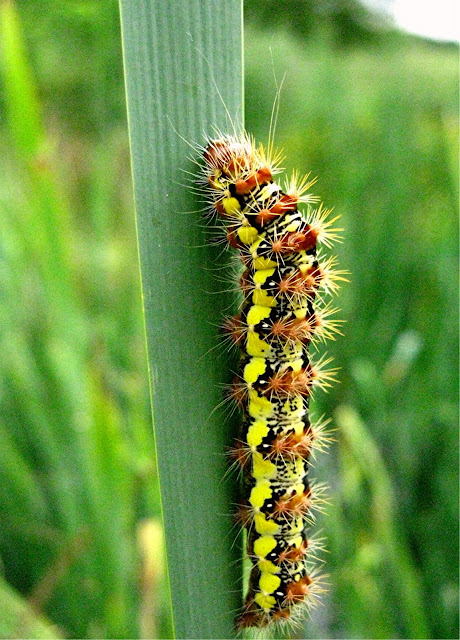 This is a pretty caterpillar, but you wouldn't believe how plain the moth is! Last year I photographed the caterpillars on native Smartweed but I've seen them more frequently on Cattails.

Last summer was a little cool and this summer is, was until yesterday anyway, a lot hot. Every insect stage seems to be accelerated. Last year I photographed these guys in the same place (near the Fern Valley Wet Meadow bridge) on September 28. These guys may be pupated and metamorphosed by September 28. Wow.
Posted by ChrisU at 4:37 PM 0 comments

George is propagating full speed ahead, both for Gotelli and the Dogwood Collection 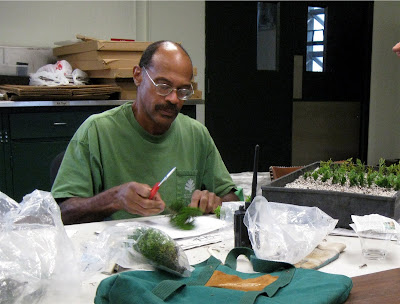 y
Young Choe is almost gone for good now. She has been our propagator, courtesy of FONA, for a couple of years now, but she's moving to Florida and couldn't come up with a reasonable commute. Now we'll have to make do for ourselves. George is a very good propagator happily; Gotelli is undergoing a lot of change that will involve multiplying many plants. It's a good thing we have our new greenhouse (it's still new isn't it?) with all the mist benches.
Posted by ChrisU at 4:23 PM 0 comments 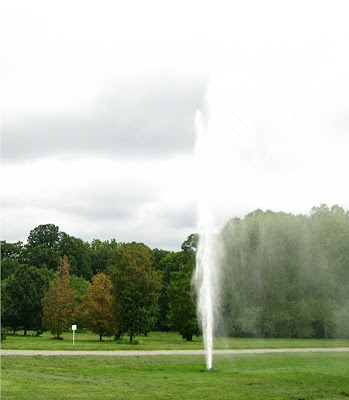 There was an unfortunate interaction between a mower (contract) and a water pipe today and.....well, actually it was spectacular. Everyone who saw it thought it was beautiful and wondered if we could keep it. Facilities came quickly, shut the water off, and it looks like a fairly simple repair. The grass had grown so tall that the spigot wasn't readily apparent......we have some serious water pressure! It's difficult to see the top of the geyser against the milky sky but if it wasn't 100 feet, it didn't miss by much. Good times.
Posted by ChrisU at 4:14 PM 0 comments 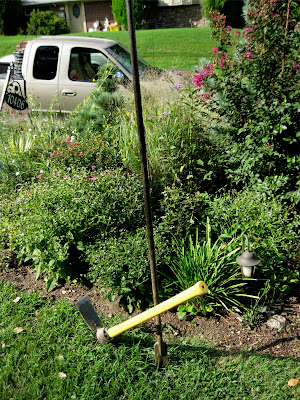 I have had this vision off and on for more than thirty years. Ever since, actually, I worked for an IGC. Washington, where I live is a city with a lot of turnover. New people come and people go. Many of the new arrivals came from areas of the country where there is soil. Where you could dig a foot or two with two or three spadefulls.

Full of enthusiasm and ideas they came to the Nursery. After a few hours they leave with 30,40,50 plants, soil amendments, mulch, maybe new gloves......I picture them pulling up to their house, eating lunch, unloading the car. They pick up the long-handled spade that worked fine in Minnesota, or Iowa, or Oregon and put foot to shovel. Clang and nothing. Possibly a cloud of apprehension passes over their brow and they try again with a bit more effort.......the shovel doesn't dent the baked clay/subsoil that is to be their garden.  I picture them looking apprehensively around at the plants that had seemed cheered them so a few hours ago.

I don't think builders really scrape topsoil off of new lots and sell it anymore......if they ever did. I do know though, that many houses in the DC Metropolitan Area are surrounded by either subsoil or solid clay. It would have been a good thing for the salespeople at the IGC to have recommended the purchase of a "cutter mattock" and a "digging bar". The Nursry I worked at, and that I still love, didn't ever carry either. There are maybe 10 box stores in the immediate vicinity and maybe each has 6 mattocks and 6 digging bars.

The IGC's want to maintain the illusion that "gardening" doesn't involve manual labor. That it's a "refined" pursuit and gardeners are "special people". Well we are, but we have to do hard work sometimes and to do that we need good tools.

The tools are the worst part of most garden centers. They carry cheap, gaudy, flimsy, completely impractical tools by the hundreds. To deal with the soils we are dealt, we need the digging bar and the mattock. We also need the traditional long-handled spade, hard rake, and leaf rake. As far as small tools are concerned, they ought to carrry the good Union trowel and a Japanese weeding knife. All the cheap trowels are worthless.

Weekend watering again today; boy we have a lot of scented Pelargoniums! 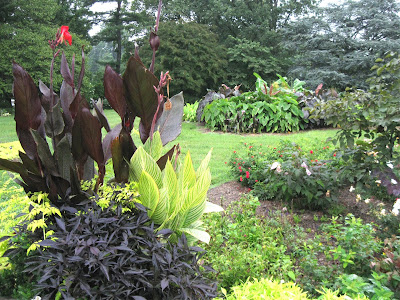 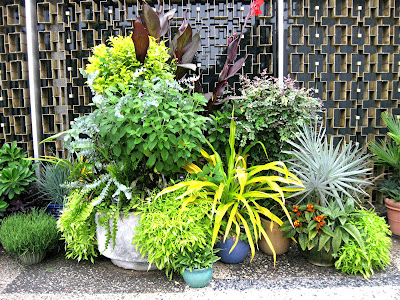 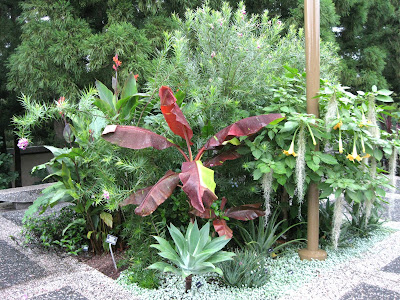 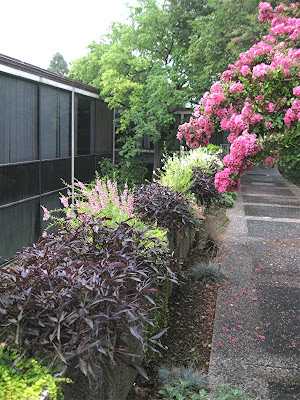 It was raining when I arrived; maybe I wouldn't need to water much? Well, the rain stopped after about half an hour so I did rounds. I was able to not water a number of things but I didnt get off Scott free. Actually that's a joke because Scott watered Saturday; he didn't leave anything dry but I checked everything and watered a handful of plants. 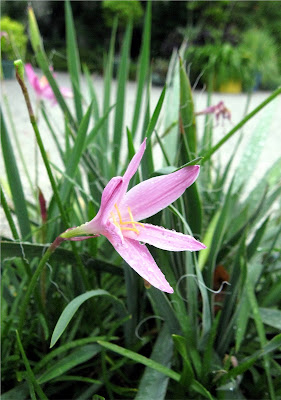 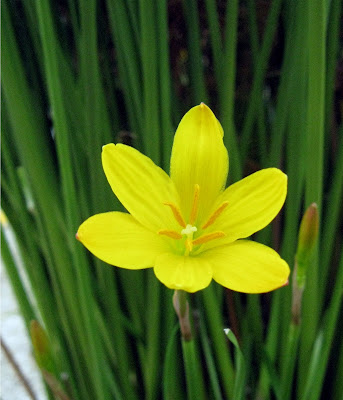 The plantings around the Administration Building are loving summer. The tropicals are loving all the rain. This is the first time this season I've spent any time with them on a cloudy day....the colors show better in this light. Brad chose a good year to put Rainlilies in some of the containers. We've had our fair share of rain and the plants have responded.
Posted by ChrisU at 10:52 AM 0 comments