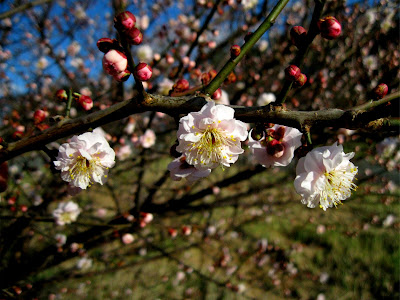 I hope they don't all flower out before the middle of March. I'm giving three walks to track the progress of spring and the first one is March 18. No matter how much winter is left there'll be any number of blooming plants by then. Some years that would be a peak period for the Flowering Apricots, but apparently not this year.

During the course of finalizing the announcements for the Spring Schedule, I noticed that the cost for the walk is $12.00. Hey, if you read this blog much you must have sensed that I have the potential to be obnoxiously arrogant.... But wow. I know I'm worth six dollars an hour. Hey, I'm a bargain at that price.
Posted by ChrisU at 2:04 PM 2 comments

George is sticking Juniper cuttings on a cold windy day 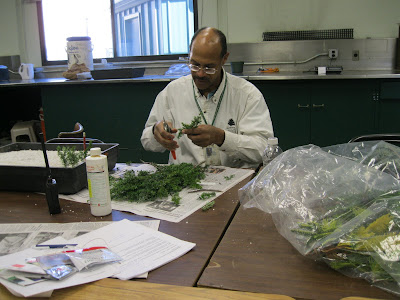 He checked with Sue Martin and her recommendation was the third week of January when buds are fully formed. The extra warmth we've had this year allowed the buds to form up a little early so he should be good to go. When he finished sticking them, he'll move them to a cool house with mist and bottom heat; the cool air will keep the buds from sprouting before the cuttings have rooted.
Posted by ChrisU at 1:58 PM 0 comments 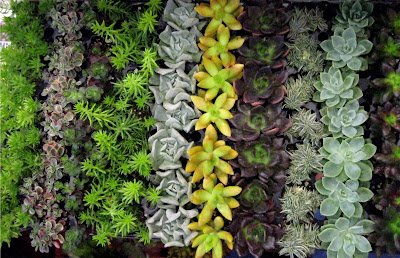 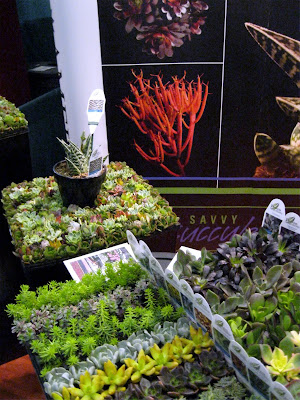 This was one of the fun booths. They are in some way associated with Proven Winners but I can't explain it. Maybe they own "Proven Winners"? They hire, license, and contract growers but beyond this I don't have a clue. The complexity of the business has eclipsed my knowledge base.

Anyway this would have been a useful item for me this past fall when I planted mixed sedums in our new steps. I did it the hard way; I bought seven or eight pots of hardy succulents and deconstructed them. They'll work, but these little plugs would have been nice.
Posted by ChrisU at 3:53 PM 0 comments

Arrrrgh.....Pirates are about. Don Shadow and Kathy Jentz at MANTS Spring Show 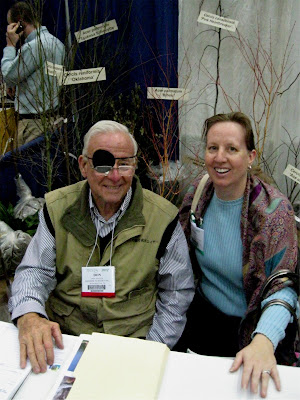 The plants and products are fun and it's great to get stack of new catalogs for the new year, but I think most of us go to trade shows to see people we might not see otherwise. I see Kathy pretty regularly because she's...she's...she's, well everywhere that gardeners gather. She's the editor, publisher, and one of the authors, ... of Washington Gardener. I see Don Shadow only now and then. Don is the dean of nurserymen/persons?; he has discovered, introduced, imported more exciting new woody plants than the rest of the trade put together. Well maybe almost that many. It's always fun to talk to him and I was amazed to find him alone at his booth this morning. Most years there are so many people that I listen for a while, wave, and move on. Today Michael, Kathy, and I had him to ourselves for a bit.

We discussed Aesculus for a while. Apparently he has one seedling from a cross of Aesculus chinensis and some large Vietnamese species with buckeyes the size of baseballs.Wow! I Can't wait. Then he segued into the story of finding a spectacular fastigiate Japanese Maple. As in so many of these stories, while walking through a nursery in Japan, a particular plant drew his attention. He asked about it and found out that it had been there for years, no one had ever shown interest, so it wasn't even named. If I remembered the name now I'd tell you but.... The best feature about it is that the trunk is single and straight and there are quantities of branches evenly distributed from the ground to the apex. We have a fastigiate Acer palmatum in the collections but it branches irregularly, sparsely, and mostly towards the top of the plant. Always good plants and good stories from Don.
Posted by ChrisU at 3:21 PM 1 comments

Prunus 'First Lady'....it clouded up and rained after noon 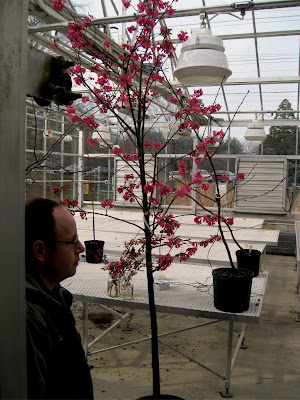 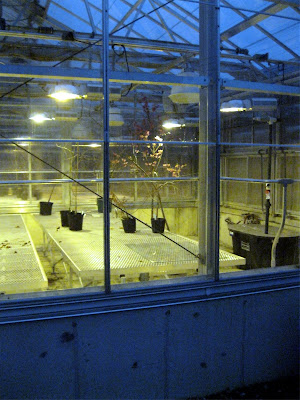 The Research Unit forced this flowering Cherry, Prunus 'First Lady' for the MANTS show, mid-Atlantic Nursery Trade Show in Baltimore this week. First Lady is a recent Arboretum introduction though it was hybridized 30 years ago. Differing from the commoner flowering cherries, it has an upright habit similar to one of its parents, Prunus okame.
Posted by ChrisU at 2:42 PM 0 comments 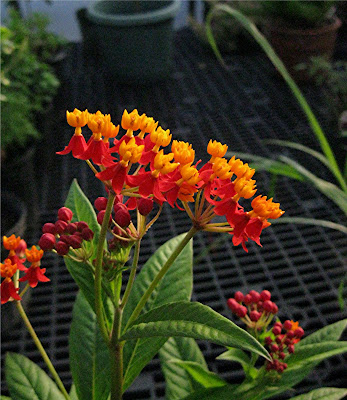 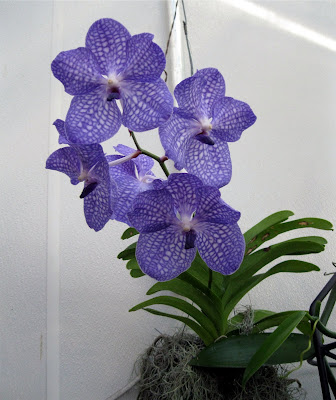 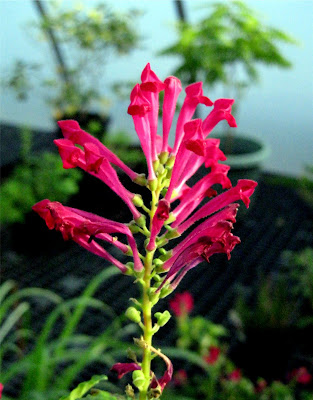 Still, just in case I got homesick for that tropical color, I found these guys among Brad's plants. The Vanda is a remarkable specimen with those huge flowers on that compact perfect plant. The Scutellaria are propagations from a plant I brought back from Florida a few years ago.
Posted by ChrisU at 6:42 PM 0 comments

Prunus mume 'Tohji-bai' alongside the path to the Pagoda 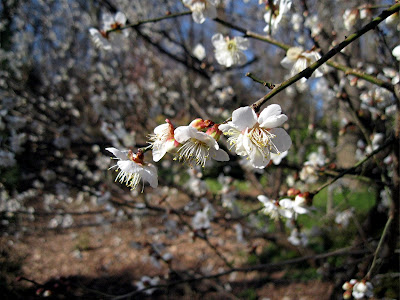 We drove through blinding snow on the way north yesterday and this morning was no picnic but by midday the sun was out and it had warmed up enough to be a quite pleasant day. The two days under 20F last week weren't enough to stop the Camellias; many of the fall blooming crosses are still flowering and the Camellia japonica selections are beginning to pop here and there. Many of the Prunus mume varieties are in full bloom; Joan told me her's is on the way out!
Posted by ChrisU at 6:36 PM 0 comments

Two weeks in Florida......just a handful of pictures 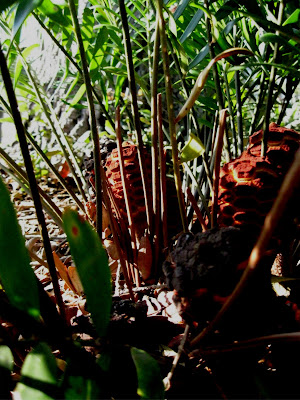 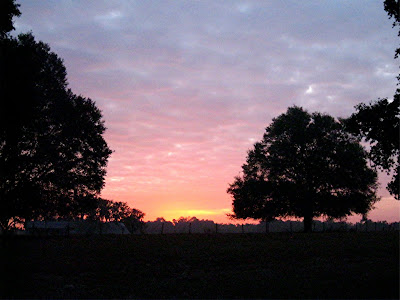 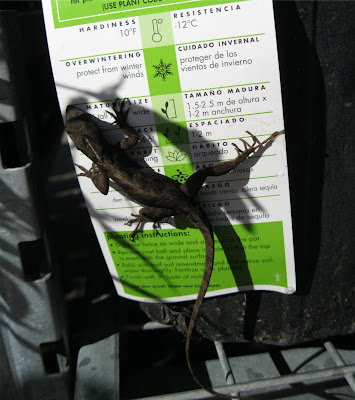 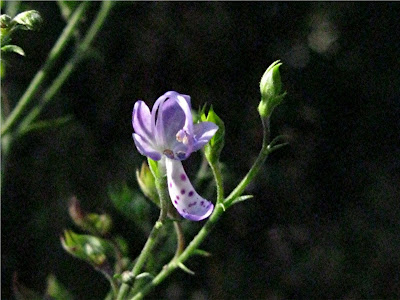 Which I didn't download until tonight. Actually I didn't touch a computer from Christmas to January 9th. At first I had withdrawal symptoms but after I relaxed, it was okay.

Many of the plants in the garden are beginning to get some size so it's more fun to work. The weather was generally good with highs between 60 and 80F. Two days it was quite chilly; one night temps fell into the mid 20's taking a toll on tender perennials and annual. We've moved away from those for the most part with a few exceptions. Asclepias, Porteranthus, some shrubby Salvias. They'll come back!
Posted by ChrisU at 5:57 PM 0 comments