Don't the Taxodiums look nice with the Flowering Tree Walk arcing between them and their bases free of weeds? 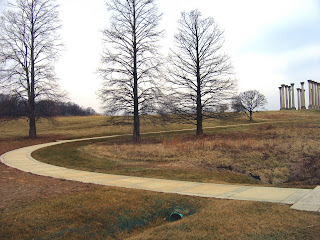 If I had a "before" picture of these three wonderful Taxodiums from say a year and a half ago, I wouldn't have to use all these words to make a case that we are doing some good things at the Arboretum.

First off, Taxodiums are beautiful trees and these stand as points of a nicely proportioned scalene triangle. Someone did a good job choosing plant material and siting it. That happened a while ago; none of us can take credit for it. However, many of us, more than a dozen by my calculations, can take credit for the condition of the site and the surrounding area.

Last spring bush honeysuckle plants grew thickly under the leftmost tree and more sparsely under the others. Ampelopsis vines used the honeysuckles as scaffolding to reach the lower branches of the trees and begin their own climb. Seedling Callery Pears up to 9 ' tall, were spotted throughout the perimeter of the planting and dozens of blackberry bushes made it difficult even to approach the trees. Poison Ivy covered the ground under and around the two righthand specimens. The areas outside the perimeter of the trees were a bit better, but still included many inappropriate seedling trees and shrubs, Japanese Honeysuckle, Porcelain-Berry, Oriental Bittersweet, and other undesirables.

A variety of projects solved these problems. The paved walkway is the current terminus of the Flowering Tree Walk. I like the sinuous route it takes. The contractor managed to get it installed with a minimum amount of collateral damage. Then our projects began. Several people raked out rocks, added topsoil, and graded the disturbed ground directly beside the walk. Other people seeded, strawed, and kept the young turf watered through a 6 week drought last summer. Another project had a team of us applying herbicide to the woody plants all through the ellipse. Joan and I both sprayed the poison ivy and other weed plants under the Taxodiums; I think we each did this twice. Pat mowed the area for the dedication of Dr. Cathy's memorial bench and Franklinia. Ed is in the process of bush hogging the entire ellipse.

Here's the thing: if you hadn't paid close attention to just how unkempt that area was, you wouldn't realize how wonderful it is that it looks the way it does now. We are slowly but steadily making inroads into many areas that have, over the years, fallen victim to decreased staffing. There have been others addressed this winter: project teams have largely groomed the overgrown edge of Beech Spring Pond just this past month, and driven by Lynn Batdorf's determination, roadsides are being pruned and cleaned up. Wow.
Posted by ChrisU at 1:25 PM 1 comments 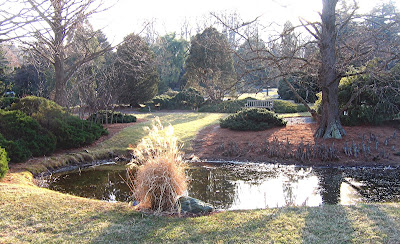 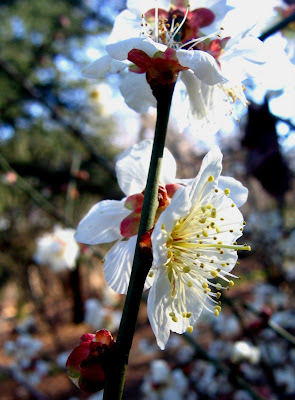 We are recording the flowering order of the Prunus mume at the National Arboretum this year. It is a good year so far because we haven't had any extended periods of warm weather. A very warm week or two would compress the flowering order and bring out most of the cultivars at once. While it did warm up to 50F today, and ?~60 tomorrow, it is supposed to cool down again for much of next week. We shall see!
Posted by ChrisU at 2:38 PM 0 comments 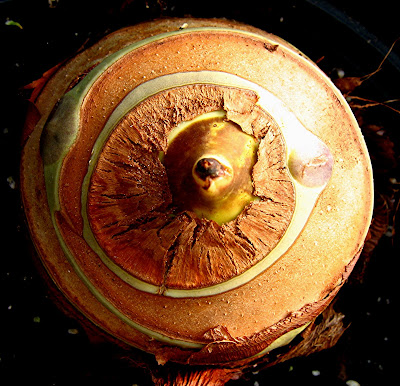 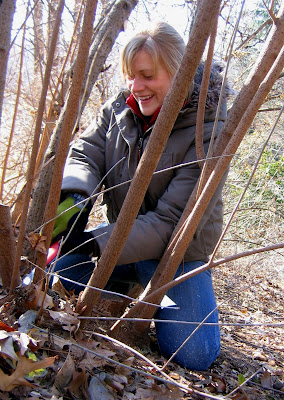 Some of them date from the 1970's. It's odd for me to think of the 70s as ancient history, but these plants are over 30 years old.

Many of the gardeners in the Asian Collections are one-year interns, like Amanda. When I prune, I like to be able to look a year or two or three down the road and plan my attack in stages. Amanda will likely be somewhere else next year so she doesn't have that luxury. Nonetheless, she did a very good job on the Chimonanthus. I will be there next year, and the job will be a lot easier because of what we did today.
Posted by ChrisU at 2:38 PM 0 comments

First fruits, flowers actually, from the Azerbaijan trip....Hey, it hasn't been 6 months yet. 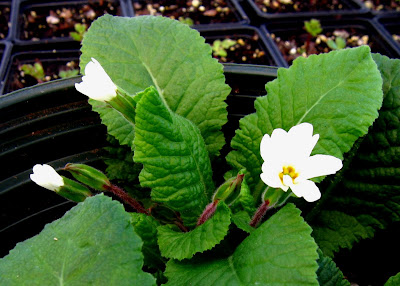 Loropetalum chinense.....from Asia to Walmart in 4 or 5 or 6 easy steps 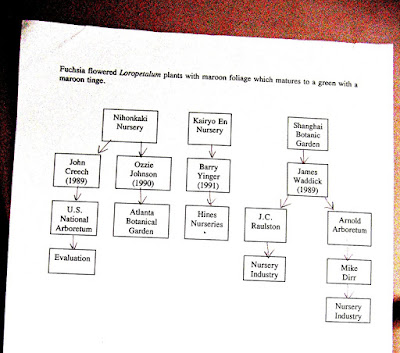 This paper was part of a large file detailing the progression of the purple-leafed, pink-flowered Loropetalums from their acquisition by John Creech and Sylvester March of the USNA to their entry into the Nursery Industry. The species has white flowers and green leaves; it is semi-evergreen in USDA Zone 7. There are a number of purple-leafed form of Loropetalum chinense with fuchsia flowers.They were selected in Asia over a period of many years. Essentially unknown in this country before 1990, today, less than 20 years later, they are a major component of nursery stock in Zones 7, 8, and 9. If you walk into a Walmart or a Home Depot, or a Lowes near our Florida house there will likely be 20-100 pots of this plant 365 days a year. Nurseries here in the Washinton area (at the northern end of it's range) stock several varieties in season.

This is a flow chart that shows the paths that these plants took from Japan and China to the mainstream of American gardens. You need a scorecard to make sense of all the players: John Creech, a well known plant explorer, was the director of the National Arboretum, Barry Yinger is a renowned Plant Explorer and Nurseryman who has introduced many many plants to the US from Asia. Mike Dirr, the author of the Manual of Woody Plants, is the dean of Woody Plants in the US. Ozzie Johnson, an Atlanta plantsman, and garden designer has traveled the world in search of new plants. Dr. James Waddick, known more for his expertise in Peonies and Iris, than woody plants, is another world class horticulturist.

There is a box missing in the Nihonkaka Nursery-John Creech-US National Arboretum line. The
Arboretum eventually released two cultivars, 'Blush' and 'Burundy'. So our line does end at the Nursery Industry like it's supposed to. Actually, I remember flats of 3" pots with the cuttings sitting on the pipes in the greenhouses in 1993.
Posted by ChrisU at 3:03 PM 0 comments 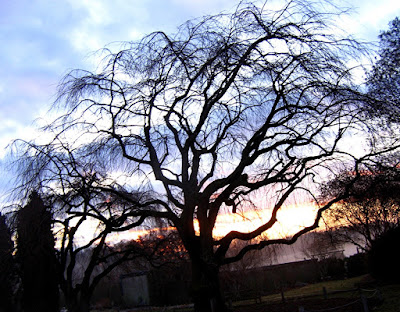