Hedychium coronarium and Canna 'Phaison'....if you don't have enough water, plant on the low end of the garden at a roof downspout 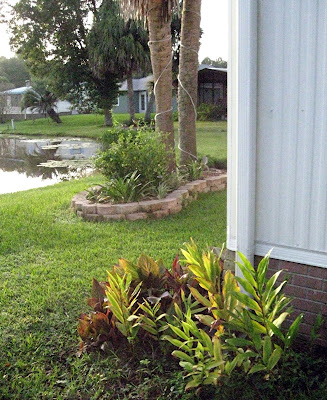 The Butterfly Ginger languished for a year and a half on the hot sunny side of the house. I moved it this past April and it looks 300% better in just a few months. There are buds on a few of the ginger shoots and there will no doubt be more by December? In the background, the Cabbage Palms are underplanted with Agapanthus cvs. and Plumbago.
Posted by ChrisU at 4:47 PM 0 comments 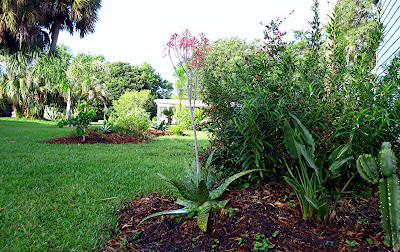 Last day: I sprayed this morning. Weeding went on the first few days of the visit and I've been watering and fertilizing since. Add in a couple of inches of rain and much of the material I failed to completely remove has begun to resprout so I put down a bit of glyphosate this morning. As soon as it has dried I can do touch up mulching. I tend to wait until the end of a trip to photograph the garden in larger pieces. Frankly it looks much better now than it did a week ago! It's still young though. The beds on the left in the background are island beds that more or less define the edge of our property. They are coming along.

This corner is probably the most developed part of the entire garden. The Cuphea microphylla was one of the plants that I inherited and decided to keep; I like it a lot and it handles the absence of care for months at a time effortlessly. The Bird-of-Paradise is not really a plant that ought to work here. It wants about another half zone of warmth. You do see them here and there in microclimates locally though, so I thought it might do here on a protected corner. So far so good; it grows incrementally every year and last winter was cold. The Aloe saponaria is a division of another inherited plant. I'm moving them around because they're dependable, good repetitive accents (in flower), and hummingbirds love them. The Cereus (notice the buds that will open after we've left) was a cutting from my mother-in-law's plant that she originally got from Behnke's many years ago. Finally the Stopper has an incredible amount of fruit, much of which has ripened over the past week.
Posted by ChrisU at 5:36 AM 0 comments

There have been all manner of fishers in the pond this trip: this egret plus various herons, anhingas, and other great egrets 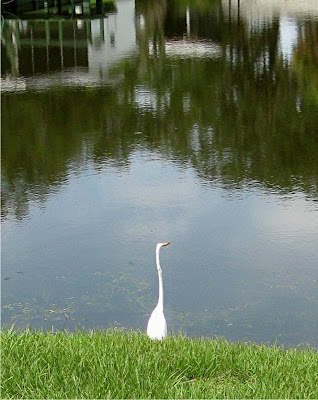 I watched this one for almost an hour from the spare bedroom. He eventually did get what looked to be a sunfish.
Posted by ChrisU at 3:16 PM 0 comments

Monstera deliciosa: this is the mother/father? of my plant 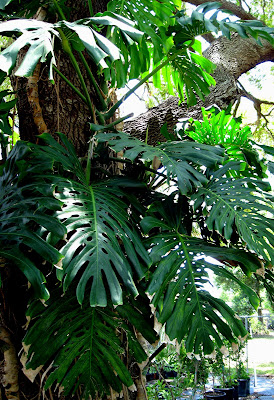 It's native.....at least to the Western Hemisphere: southern Mexico through most of Central America. And the fruit is delicious, if the oxalic acid crystals don't disable your esophagus. At least the fruit smells good. Wilcox is a nice little nursery that sells a lot of Florida native plants. They sell other things too like this Monstera. I've noticed that Philodendrons are a good way to stretch into USDA Zone 9b or even 10. I see big P. selloum around and the occasional giant Pothos. They're not really hardy here, but hey....you gotta give it a try!

This is just a cool plant. It rained yesterday afternoon just like it's supposed to. Not at 4:00, more like 6:30. We got an inch and a half; they day before we got a half inch with only traces the two previous days. Still, things look very happy and I can only imagine how wonderful this garden would be if I were here more often to water when things got tough. Well...maybe someday.

I'm updating my records and it give me some amount of pleasure to be able to record life on the Bismarckia. All of its leaves were killed last winter by~20F temperatures. There are about three leaves starting up but who knows whether they can mature in time to handle whatever cold this winter dispenses. I saw the most spectacular Bismarckia I have ever seen in Clearwater yesterday. It was 40' tall and the fronds started about 10' above ground. The base of the 12'-14' long fronds was, I'm guessing, 8" in diameter. The fronds were 6'-8' across and they were all perfect: all silvery grey. I've never seen a plant like this even in an Arboretum or a Botanic Garden and it was just on the street corner. Wow. Now I'm inspired.
Posted by ChrisU at 8:54 AM 0 comments 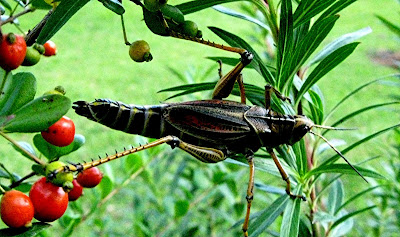 And it's not allowed to eat the Simpson''s Stopper; actually it's sitting on Cuphea microphilla not on the Stopper per se. Though it may not be evident from the photograph this grasshopper is over 4" long. I see a few of them a year. In theory they prefer wetland plants and, get this!, Pokeweed! Doing research today I realized that the "evil crickets" (black with yellow stripes and much smaller) that I have seen in years past on the Meyer Lemon are actually the nymph form of this monster.

The good news is that here in Florida you're never more than a mile away from a pawn shop so I can pick up a used shotgun this morning and take care of the problem.
Posted by ChrisU at 4:39 AM 2 comments

Feeding and Weeding...working in the sun

I bought some Black Cow today.....because roses have needs. Actually I wonder sometimes if part of our fascination with roses has to do with their needs. Some of the older roses, some of the newer landscape roses, and the odd species can forge along without a lot of inputs from the gardener, but for the most part, if you stop attending to your roses they pay you back by looking horrible. They don't necessarily suffer long term damage, though they may, but they sure will look bad quickly. Fungus on the leaves, leaves skeletonized or eaten outright resulting in defoliated plants, flowers decreasing in number and size......But start applying the chemicals, enrich the soil, water, deadhead, do some pruning and you're right back on track.

We only have two roses down here, Knockouts. They were originally planted with a bag of topsoil each (sludge based) but it's been a year and a half and I expect the organic component has disappeared. Black Cow is just a trademarked brand of dried cow manure. I'm not certain how rich it is but I guess time will tell.

The bulk of the weeding is done. The newest beds, islands in full sun, are always the worst and the abundant rainfall of the past few months resulted in some lush weed growth. The worst culprit seems to be a sedge I have not identified that basically carpets the beds. Then there's a short Fabaceous carpeter that better not be Mimosa strigillosa, but could be; I might have bought it from Wilcox Nurseries in Largo, Florida. It looks like such a pretty little plant, but when somethings called a groundcover it's usually for a reason. I have no record, but that's no guarantee. Anyway I'm done weeding for now and planted a 3 gallon Lime, extending one of the sunny beds along the SE side.
Posted by ChrisU at 1:36 PM 0 comments 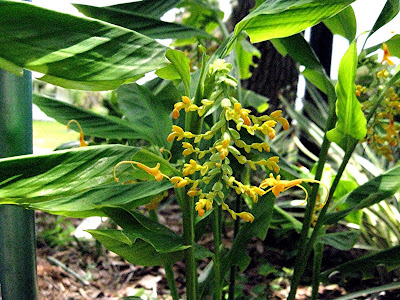 The secret here is to have plants that can handle 6 months of drought. This one seems to be working; it was flowering when it was planted in August 2007 and has bloomed every year (twice) since. Dormant through the winter and spring, it resprouts with the rains of summer. The arching stems are between two and three feet tall with the terminal inflorescences daintily dangling the individual flowers. Cool plant.
Posted by ChrisU at 11:04 AM 0 comments

Until recently I hadn't realized my ignorance with regard to these plants. Though Spathoglottis plicata is the commonest species, the range of colors and flower variations available suggest to me that there has been hybridization going on. The typical plants that you encounter in non-specialized retail tend to be, and I say this without contempt, a generic pink/magenta/purple. 'They're beautiful and I planted one here three years ago. The problem is that they are terrestrials (versus epiphytes) and require a bit, actually, a lot more moisture than we have available here sans watering. It languished for two years then failed to reappear at all. The color of this plant (8$ from Home Depot) was so intriguing I'll take it home and treat at as a regular tropical orchid.
Posted by ChrisU at 5:52 PM 0 comments

Florida: I love it but I wonder sometimes.....yet I rhapsodize

I find it helps me to get my mind around this state by picturing it's economy in biological/thermodynamic terms. By my reckoning, Florida has three major populations: tourists and retired folks, who form a resource base for opportunistic entrepreneurs, the last group, to exploit. The money is the base of a food chain and things operate from there.

To be fair, everyones not a pirate. I know there is a large percentage of the population that just lives their lives like people do everywhere: they deliver mail, or teach, or drive trucks. They're administrators, public servants, police, technicians, doctors and so on. Still.....the food chain starts with the tourists and the retirees, and there are a lot of souvenir shops, RV dealerships, and generally sleazy retail operations. One enterprising exterminator has devised a program to eliminate "orange rats". For a reasonable fee. Commendably preemptive since there seems, at this time, to be no such thing as orange rats.

I guess technically I'm neither a tourist nor a retiree. I act like a tourist but I'm living in my own house so. ..I'm not retired but our house is in a retirement community...I don't know. I do know I love the Natural Areas of the state: coral reefs, the pelagic ecosystems of the Gulf of Mexico and the Atlantic, my own Florida Scrub with it's Gopher Tortoises and endemic vegetation. Sandhill Cranes walk down the street in front of our house. In the spring, migrating warblers flit about in the Spanish Moss draped Live Oaks in the front yard. Herons, egrets, eagles abound among a tremendous diversety of bird life. It rained this afternoon bringing the treefrogs to life in the rain gutters around the screen porch. Their sharp barking calls punctuated the sound of steady rain on a metal roof.
Posted by ChrisU at 3:54 AM 0 comments