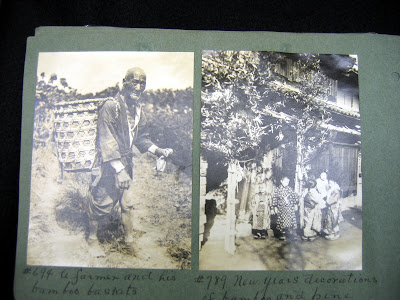 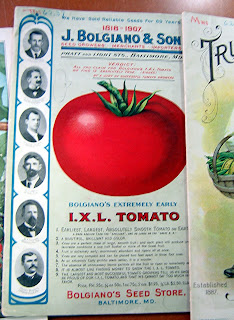 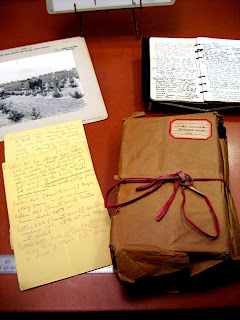 This Saturday a plague of garden clubs descended on the National Agricultural Library in Beltsville, Maryland. I had never been on a tour of that facility so hey... The staff generously accommodated us on their day off (the library is open M-F with the first floor and many resources available to the general public). It is among the largest agricultural libraries in the world and the physical plant is visually intimidating. The building rises, a brick monolith, 14 stories above a knoll in the middle of a large field alongside Route 1. I must be old because I remember when it was built in the late 1960s. Actually, I remember its opening in 1969 and there are lots of things I don't remember from that year!

While the strictly scientific collections are impressive, journals, books, specimens, etc; the historical materials and art really blew us away. We saw collections of Jeffersonian horticultural correspondence, a complete set of Curtis' Botanical Magazine, stacks of antique seed and fruit catalogues, and gazillions of botanical illustrations. Many of the illustrations are watercolors, they were made as scientific records before color photography became an option. Still, many (thousands?) are legitimate works of art.

The Wikipedia biography of Frederick Vernon Coville, botanist extraordinaire and Honorary Curator of the National Herbarium, goes to the trouble of observing that his scientific and personal papers are spread over a number of libraries: The Smithsonian Institute, The National Arboretum, and The University of Wyoming. Well guess what? Add the National Agricultural Library because we saw this display of his field notes that represents the balance of his notebooks. Clicking on the picture will let you see that the brown package is titled, Mr Coville's Blueberry notes 1910.

When I hear the name I certainly think of blueberries. I sold the cultivar 'Coville' at Behnke's in the 80s and 90s and it's still in production today. Coville's efforts, in conjunction with Elizabeth White (1871-1954), to improve the quality of blueberries is one of those good horticultural stories that you hear from time to time. She was the daughter of a well-to-do Cranbery farmer, actually the proprietor of a 3,000 acre plantation, in New Jersey and he was an already distinguished USDA botanist. She invited him to come to New Jersey and work on blueberries. He went. The story continues that, in an attempt to get prime breeding stock, Ms. White offered a reward for blueberries that wouldn't fit through her wedding band! Their efforts were successful and produced a number of excellent cultivars.
Posted by ChrisU at 12:19 PM 0 comments

A Treasure trove of conifer seeds from the past: three boxes full 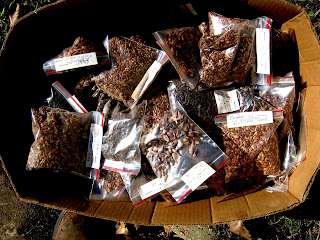 As part of the continued improvement in the Arboretum's physical plant, the ancient walk-in cooler in the basement of the headhouse is being replaced this winter. We use it for both seed storage and cold stratification; also occasionally for storage of dormant plant materials. All of this will have to go somewhere while the new cooler is being installed. The new propagator, Young, was tasked with making sense out of the results of years and years of laissez-faire cooler management. George and I volunteered to help her sort things out. After connecting just about everything to a curator or collection, we found three good-sized boxes of conifer seeds on a top shelf. The dates on the seed packets are fron the 1970s but nobody here seems to know how they came to be in the cooler. While some may be the result of Arboretum collectors, it seems likely that most came from other Institutions likely via Index seminum, a seed exchange program wherein Botanic Gardens, Arboreta, Colleges, Universities, etc. produce lists of the seed they can provide to other like institutions. Everything we saw was native to this country but we didn't dig down so who knows whats in there.

Apparently George and Pat found one of the boxes a few years ago and George tells me that they germinated Pinus rigida without any problems! Because we had other duties to attend to, we didn't spend any amount of time exploring the boxes, but I took a few quick pictures and just the packets visible in the top layer of one box showed taxonomic and geographical range. Reading the labels is a lesson in obscure American place names. There were Douglas Fir seeds fron Curry Oregon, Snoqualmie Falls and Trout Lake, Washington. Three different pine species: Longleaf from Mississippi; Slash from Jackson, not Jacksonville, Florida; Loblolly from Jefferson, Mississippi. Noble Fir from McKenzie Bridge, Oregon. Because he works in the Conifer Collection, George will examine the boxes to see what might be of use to our collections. I just want to read the names of the collection sites!
Posted by ChrisU at 1:51 PM 0 comments 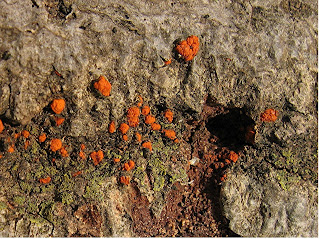 I am doing nothing today but watching the Inaugural proceedings. And reading and eating and tending a fire (it's not going to get up to freezing outside today). I found these interesting ? fungal spots on an oak log after splitting it. As I have said before, in the winter we take our color and beauty where we can find them and in whatever sizes the world sees fit to distribute them. These are really small, the largest only a few mms in diameter, but they're really colorful.

They are so colorful I almost feel like they ought to be part of a coral reef, but they're just growing on a piece of tree in my woodpile. I have chipped out a piece of bark and will examine them under the dissecting microscope. Arboreal mycology might be an interesting field for a future life.no

There are very few days in my life, I can't remember the last one, when I have really nothing that I ought to be doing. Perhaps the oddness of today has put me in an odd mood, but I am going to observe something that I normally would note but not comment on. Aren't there any African-American newspeople with enough position, clout, or cachet to have been given an anchor's role in today's coverage of the Inauguration? The presence of Al Roker, a self styled comic figure, doesn't count, actually, it only makes the situation more obvious. I would have liked today to have seen an African-American anchor or even a pundit......it seems odd that as a country we can elect Barak Obama president, but the purportedly "liberal" electronic media can't find a non-white they consider capable of anchoring a national news event.....Patience I guess. Progress is inevitable but wow!
Posted by ChrisU at 10:50 AM 0 comments

Inauguration Day brings great hope and optimism to a country....This Erica brings a small spot of cheer to a barren landscape 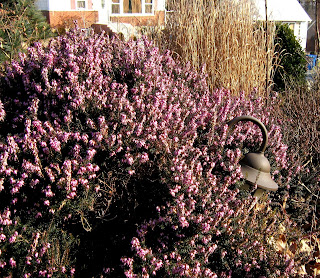 You have to love this plant. We have had a lot of cold weather this winter and it hasn't fazed Erica x darleyensis 'Darley Dale' in the least. Evergreen and cheerfully flowering it is a small spot of color in a brown and grey landscape. This plant is about 10 years old and its about 3 feet in diameter and a foot and a half tall. Buds showing color have been present at least since Thanksgiving and flowers have been open for a month at least. It will look good into mid-spring.

Darley Dale is a hybrid between Erica carnea and Erica erigena that originated in a nursery in Derbyshine, England around the beginning of the last century. My experience has shown it to be a much tougher plant then the many selections of E. carnea. It is a plant that I use extensively in designs both for its out of season appeal and its compact evergreen growth. It is somewhat particular in its requirements, needing more than half a day of sun and absolutely requiring well drained soil. Wet clay will cause this plant to languish and then die. Most nursery grown plants (that means almost all the plants you are likely to encounter) will be container grown in a light mix and are used to regular watering. The plant pictured, and remember it is 10 years old, is growing in pure sand and gravel and rarely gets watered even during droughts. The trick is transitioning between that spoiled container and the self-reliant garden stalwart. Well......water regularly during the first summer but try not towater until the soil is bone dry. I know that's not always an easy judgement but its worth the effort.
Posted by ChrisU at 7:42 AM 0 comments