Brad worked on the orchids this week, repotting and mounting 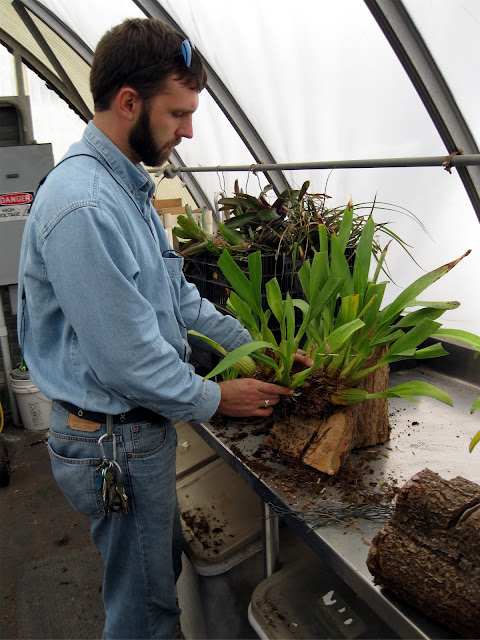 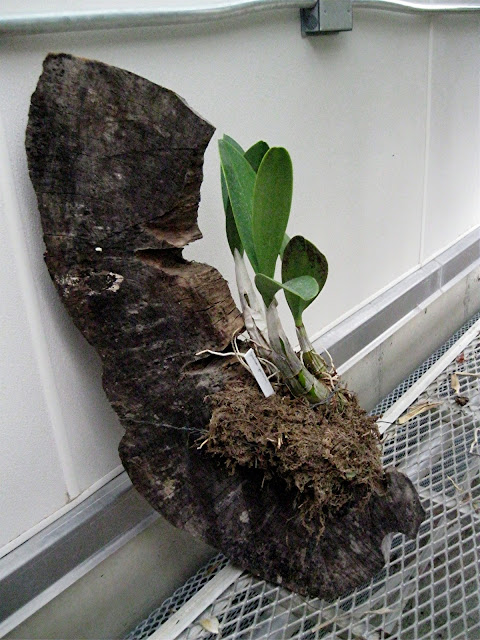 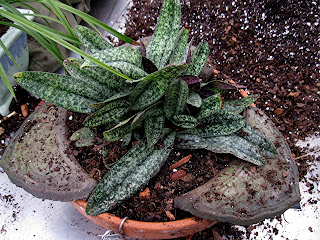 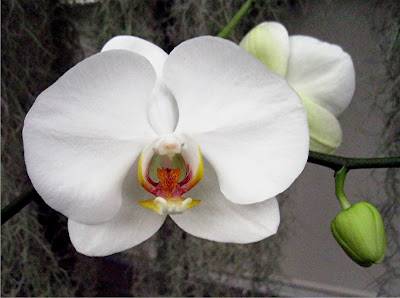 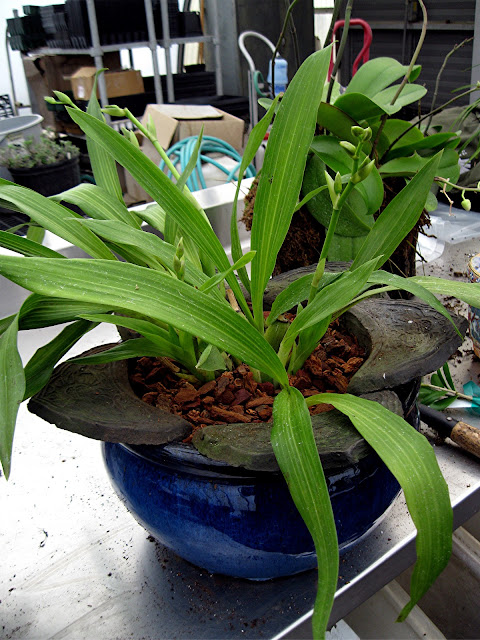 Intriguingly innovative. The odd pieces in the middle and bottom picture are ceramic tiles leftover  from construction in the Bonsai area. We have pallets of them overgrown with vines. They're kind of creepy on the pallets but very cool with the orchids. When the orchids flower they'll be on display to the public. .
Posted by ChrisU at 4:11 PM 2 comments 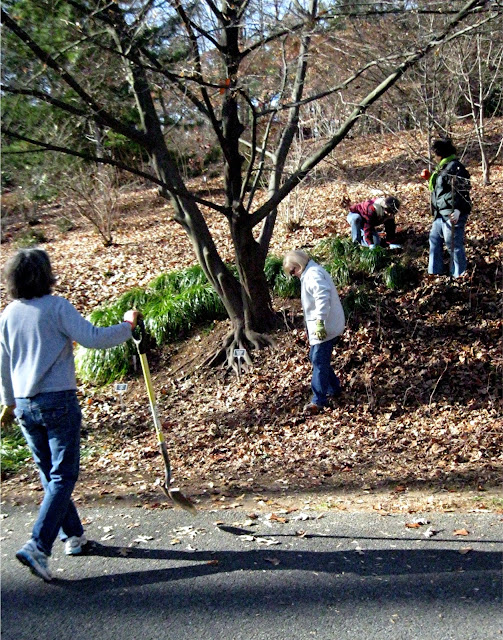 Before they began working, in the picture I didn't take, the carex grows up to the base of the tree, obscuring the interestingly contorted roots. They dug out the plants that covered the crown and moved them up the hill. They stretched what had been a shapeless planting into a graceful semi-circle that draws attention to the muscular trunk and braided roots. It was their idea and it was a good one.

Continuously tweaking is the difference between a good garden and a very good one. We try to do something on this order every day. We're on our way.
Posted by ChrisU at 3:54 PM 1 comments 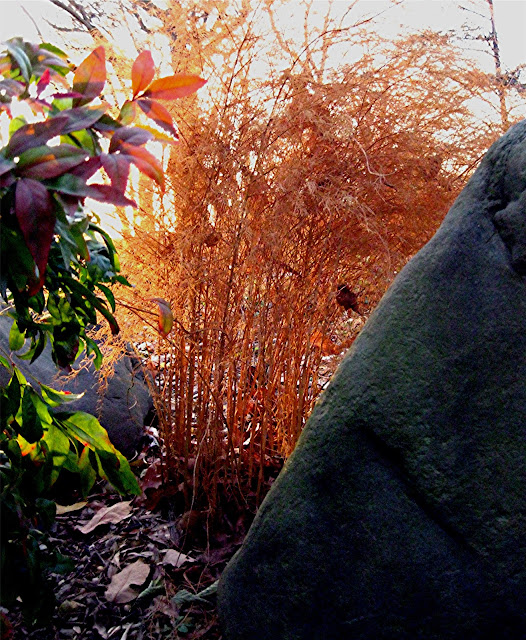 .....is that if I'm coming out of China Valley at the end of the day this asparagus is backlit gloriously. Asparagus cochinchinensis.
Posted by ChrisU at 2:49 PM 0 comments 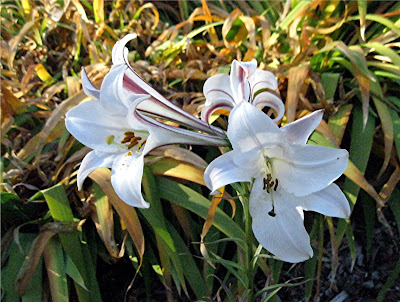 This is one  confused lily in the Asian Collections.
Posted by ChrisU at 2:18 PM 0 comments

We went to Broookside Gardens to see their holiday display 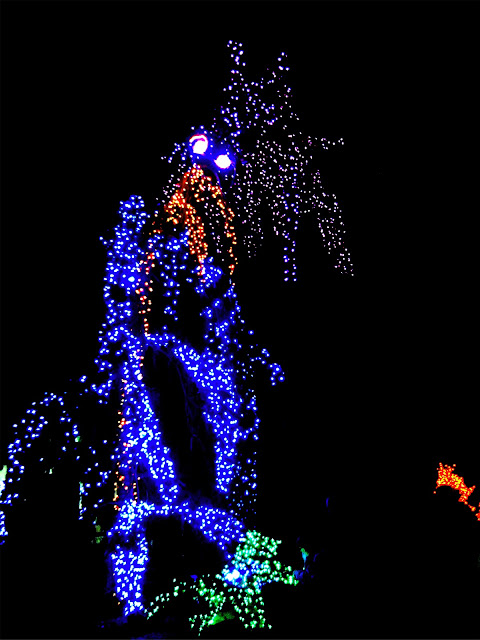 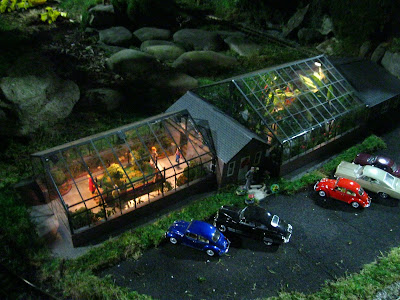 Their yearly light display, "The Garden of Lights" started the day after Thanksgiving and goes through the sixth of January. We always go; it's a tradition. It's wonderful every year. They have pretty much totally converted to LED's. That's good because they're brighter, use much less power, and allow for colors like blue and purple that were never done very well with incandescent bulbs. This blob is a monster they've had for years but they completely redid the colors. I didn't capture the blue very well; it's incredible. And they've done a number of trees in blue. It's always fun. They display in the conservatory included a train setup which included this model of a train setup inside a model of the conservatory. Kids love it and since I'm just an older kid with a gray beard, I liked it too.

They provide live music in the visitor center and we always try to go when Jim Dronenberg is harping. The music was beautiful; it occasionally bordered on the irreverent and approached the risque. Children loved it intuitively.....I can only hope some of the literal content was over their heads.
Posted by ChrisU at 3:28 PM 0 comments

The tender succulents are put away for the winter 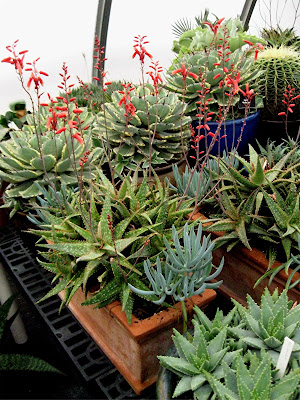 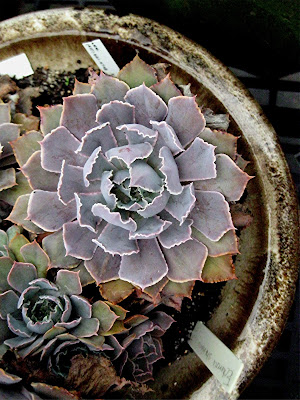 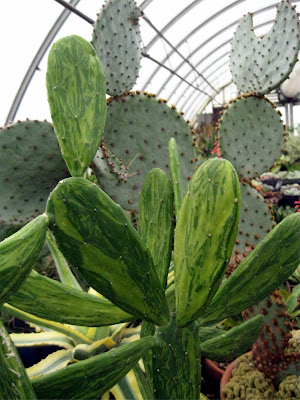 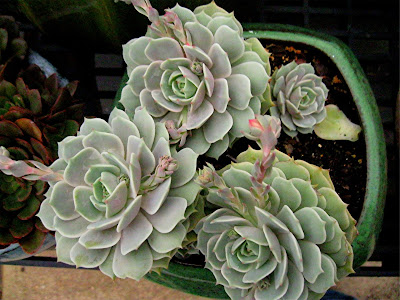 So naturally we're settling in for a pleasant string of 70F degree days!
Posted by ChrisU at 2:34 AM 1 comments 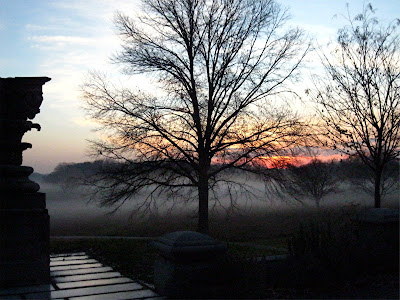 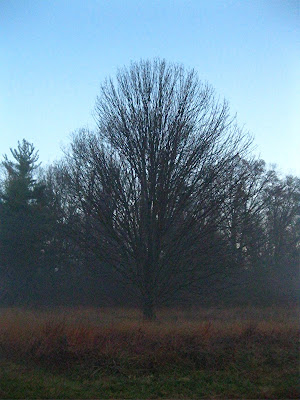 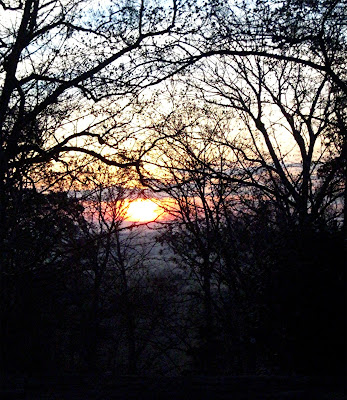 Sunrise is still receding and will be through the end of the year. Our latest sunrise is 7:27. We have turned the corner as regards sunset. Or at any rate we're standing at the corner waiting. Our earliest sunset is 4:46 and the good news is that we're there now. The bad news is that we'll be sitting on that time for another thirteen! days. Then it'll turn around and a week later or so, we'll begin to experience a net gain in daylength every day.