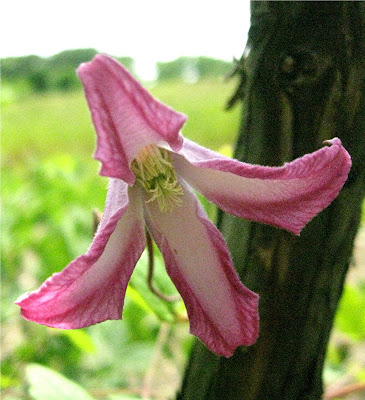 It's a hybrid in the Texensis-Odoriba group. I have yet to see a Texensis hybrid that wasn't beautiful and this is no exception. Except that it purportedly  has no Texensis in it, being a cross between Clematis viorna and C. crispa. Both are natives. Whenever I delve into Clematis genealogy, I get the feeling that there are a lot of open crosses involved; serendipity and all that. Fathyers don't seem to be as readily identifiable as we might wish  The parents of this plant did a good job whoever they were.
Posted by ChrisU at 3:29 PM 0 comments 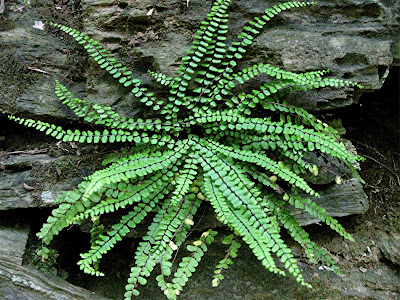 There are no records, and Joan has no memory of them. They must have been there all along (translate to 20-50 years) and just passed as small Ebony Spleenworts. The abundant moisture of the last 18 months has allowed them to grow to a size where their true identity is unmistakable. It's a nice little fern that grows on rock faces and is native throughout the US excepting the prairie states.
Posted by ChrisU at 2:46 PM 0 comments 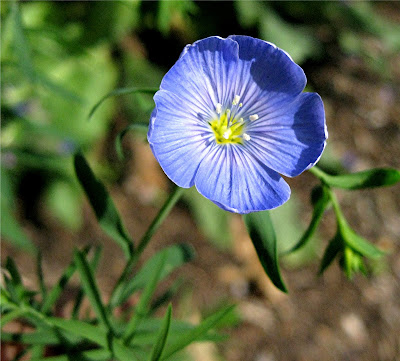 A pretty blue flax from Siberia, I put eight of these out last year and all did well save for the three? swallowed up by the Azerbaijani Anchusa. This spring only one returned and this is it. We'll have to identify it now that it's flowering; it's pretty clearly not the common garden Flax.
Posted by ChrisU at 2:20 PM 0 comments 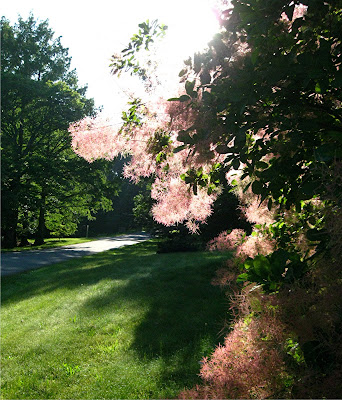 And coming over the hill from the Holly Magnolia Collection, cast long shadows in the Flowering Trees and warmed up the last traces of morning fog. 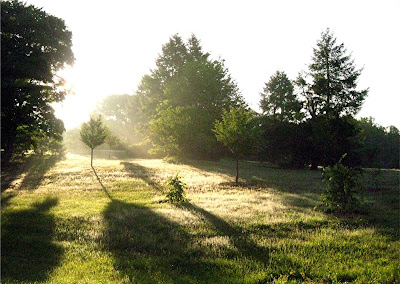 Brad not only candled the Japanese Black Pine at the entrance to the Adminstration Building, 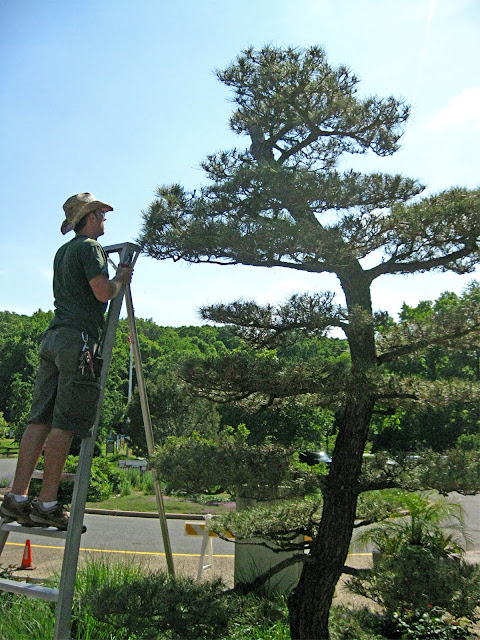 He thinned the branch structure. That's why you can see sky though the upper foliage. We think it'll be a healthier plant this way. The growth had gotten so thick that a percentage of the shed needles didn't fall to the ground, but were suspended by the densely packed growth. That's good habitat for pests and diseases.
Posted by ChrisU at 4:24 PM 0 comments 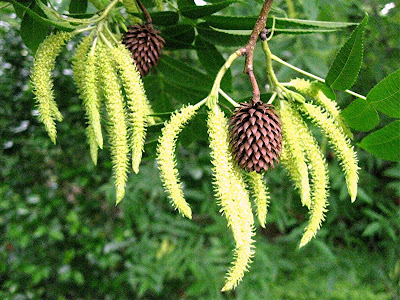 This is clearly an unlikely member of the Juglandaceae. Still....there's something about it. This one is flowering below the Asian Collections parking lot.
Posted by ChrisU at 5:15 PM 0 comments 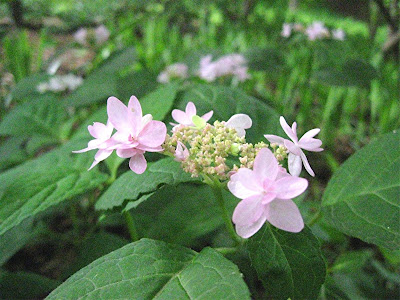 This cultivar has actually been flowering since last week. I believe it's the first. The serratas are a bit quicker out of the box than the mopheads. This is a dwarfish selection; ours isn't over a foot tall. The tiniest bit of research revealed that Daniel Hinkley collected and named this selection. He relates the episode in The Explorer's Garden: Shrubs and Vines from the Four Corners of the World

This is going to be the year of the Hydrangea in our area (Washington, DC and environs) They're budded, they had a good winter and spring moisturewise, and we had no freezing days in March. This may not be the best year of all time, but it'll surely be up there.
Posted by ChrisU at 4:59 PM 0 comments 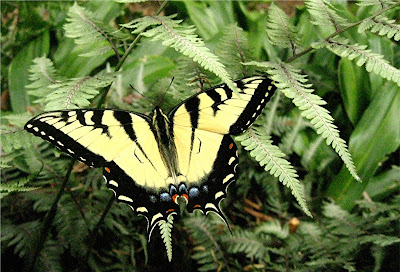 On a fern? Flowers....they're all over flowers, but the fern, I don't get.....possibly just emerging. There doesn't seem to be anything broken or missing and the colors are perfect.
Posted by ChrisU at 2:46 PM 0 comments

Hydrangea radiata is getting ready to flower in Fern Valley 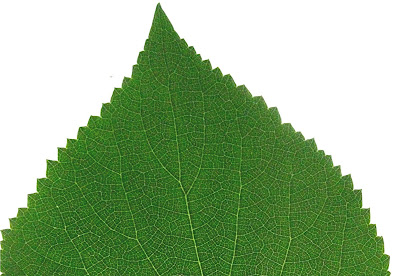 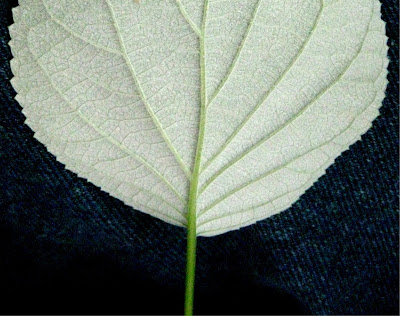 The silver indumentum on the bottom of these leaves is almost the best part of this plant. The flowers are nice, but the leaves are super. The color is the result of thick matter hairs completely covering the undersurfaces of the leaves.

The particular plant that contributed this leaf is located where the path to the pond intersects Crabtree Road. It is budded heavily but not flowering yet. Others are scattered throughTout FV where their SE nativity makes them appropriate.

We saw Silverleaf hydrangea a lot on collecting trips in the mountains in Carolinas, Tennessee, and Alabama. Formerly considered a ssp of Hydrangea arborescens, it has a lacecap type inflorescence. The literature suggests that it can grow to 3M but I rarely saw a plant taller than I am.
Posted by ChrisU at 2:39 PM 0 comments

I had to drop my "favorites" box recently because I wasn't able to selectively take out two icons whose pornographic links were triggering blocking software at the USDA, my employer.
Posted by ChrisU at 3:11 PM 0 comments

Magnolia macrophylla and Magnolia sieboldii 'Colussus': one native, one Asian, both beautiful 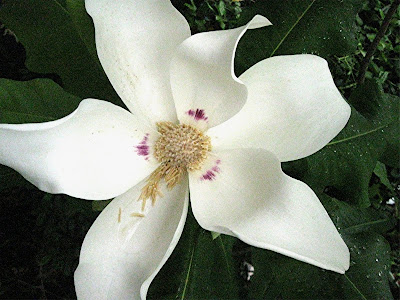 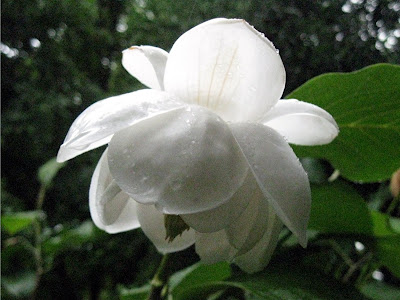 Today it rained for the second day in a row. It turned out to be a good day to look at Magnolias. These are not two of my favorites, they are my two favorite Magnolias. Not 'Colussus' in particular, though it is nice, a spectacular double-flowered hexaploid. I just like the graceful pendulous flowers of M. sieboldii. 'Colussus' is a colchicum induced hexaploid created by Dr. August Kehr, late of Hendersonville, North Carolina. A well known and respected plant breeder, he released both Rhododendrons and Magnolia selections, one of which he named 'Hot Flash'.....some of those Magnolia people are...interesting.

'Colussus' was for sale at the FONA Spring Fair/Plant Sale. I think there were four of them and not all of them sold; Pat grabbed one afterwards for the Magnolia Collection. They (the plants at FONA) didn't look too good but they're Magnolias so they'll come around. If you bought one, congratulations!

The M. macrophylla flower is on the tree beside my front deck. Last year I was impressed by the size of the flowers and measured one at 21", noting the superabundance of rainfall. This year we've had generously adequate but not excessive rainfall and the flower only measured 17". This is still large compared to Dirr's "8 to 10 occasionally 14 inches).
Posted by ChrisU at 2:54 PM 0 comments

Philadelphus incanus is flowering this week in China Valley 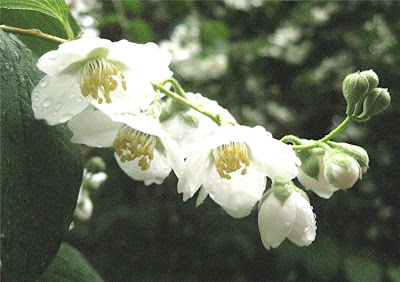 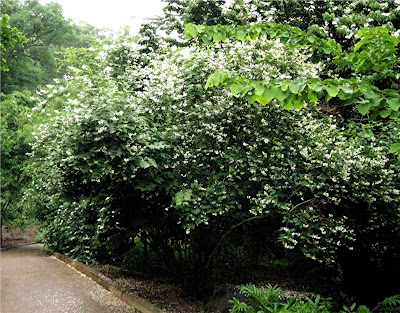 It has a wonderful fragrance and though it doesn't stay in bloom for a long time, it sure is a great pleasure for a week or two. With more people gardening in smaller and smaller areas, Mockorange is just one of the larger, coarser, single-season shrubs that have gone out of style. P. incanus is a species, one of more than 50 in the genus; most of the Mockoranges that were so common 50-100 years ago were crosses or selections of other species. Still this has the typical appearance and aroma.

When lots were an acre and shrubs ran the periphery in back, these big guys, along with Lilacs, Weigelas, Forsythias, Deutzias, Quinces, the larger Spireas, and a handful of others were mainstays of the shrub border. There were dozens of cultivars, or more, of most of these plants.  It's understandable why we don't grow them so much anymore but it's also nice to be able to still see them in Public Gardens.
Posted by ChrisU at 4:19 PM 0 comments 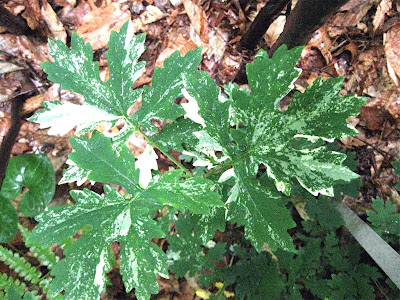 There are a million Wood Poppies in the collection, I'm surprised there isn't a golden round-leafed one or a tree form! Michael came in this afternoon and asked me if I'd ever seen a variegated Wood Poppy in Fern Valley. Seems like I might have, but I don't remember. Anyway, he told me where this one was (hiding under a fern) and that it was growing with others that were also variegated, though less intensely. I hunted it out and while the gray rainy day didn't allow for a great picture, you get the idea. It's cool. Michael collected seed and we'll see how the progeny turn out.

Some people just "see" better than other people. Of course I've got horrible vision, but if I had the same eyesight as Michael or Pat, I don't think I'd begin to see the things they do. They find a lot of curiosities in the gardens and many of them end up as pictures here. Michael showed me the bugs cavorting on milkweed by the FV Entrance that became my favorite picture of 2009. And other things I can't remember. I vaguely remember reading a long essay/short book by Aldous Huxley: The Art of Seeing. Amidst the nonsense were some interesting ideas about how we "perceive". I know when I meet a new plant or a new mushroom or bird or whatever, with each individual I come upon, it becomes easier and easier to spot them so that occasionally, after hours of looking and not seeing, the species in question turns out to be everywhere. Here's my question though, how do you see things you've never seen before?
Posted by ChrisU at 4:02 PM 0 comments 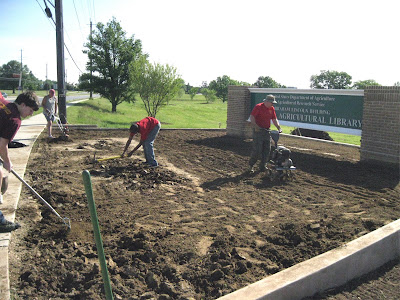 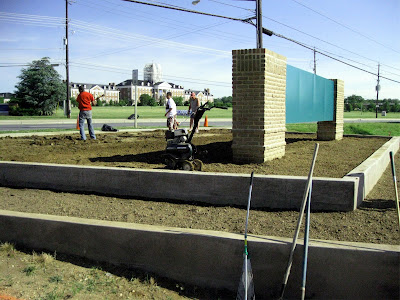 I got to the site just after 8:30 and the scouts and leaders of Scout Troop 1033 from Beltsville were already on the scene doing site preparation. I'm always amazed by how much can be accomplished and how quickly, when you involve a lot of people. Scouts, of course, do public service projects, and Troop 1033 has done a number of landscaping projects. They work well together; the ground was quickly prepped and the plants were brought out and unpacked. 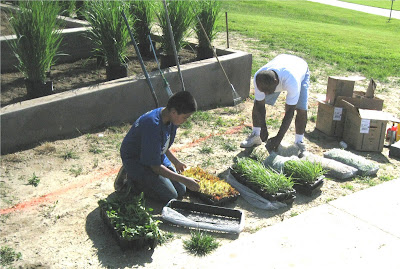 There are 6 different plants in the planting; two were in 3 gallon pots, Morella cerifera 'Don's Dwarf', and Panicum virgatum 'Northwind', and the Troop rented an auger to speed up planting. The others were planted as landscape plugs. A battery operated hand drill with a bulb auger aided this part of the planting, though and old-fashioned manual bulb planter worked well for the shallower plugs. 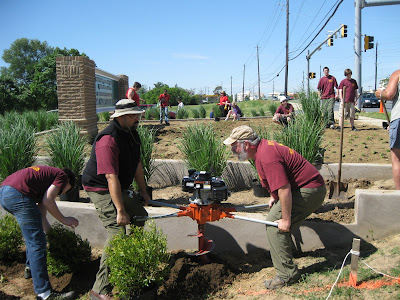 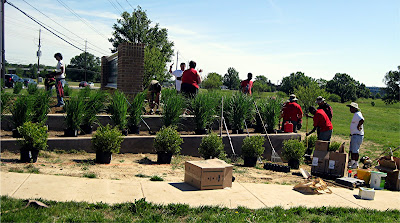 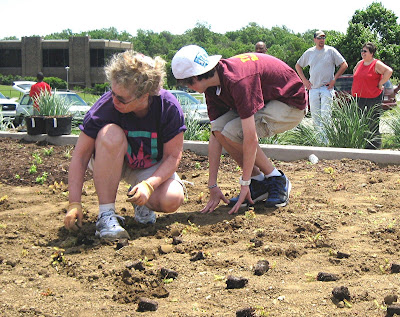 A lot of planting, some mulching, sweeping, watering and they were done. I did the design for this site a couple of months ago and after a bit of discussion with the committe, we agreed on the plant list. That list is what went in today which may not seem remarkable to any of you who aren't designers, or landscape contactors, or clients of either. The fact is that, for a variety of reasons, things always get changed: sometimes many things, sometimes only a few, but it's uncanny how even the smallest change can affect the functionality of a design. Or am I just being egocentric. Anyway, this one went in exactly as we conceived it so if it doesn't work out there's no alibiing. I'm feeling good about it though. 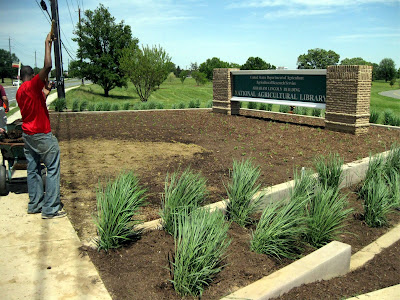 This is the last picture I took because, well the plugs are so small you can't even see them but I'll be watching it closely and as soon as the top planting fills in, I'll post some nice pictures. It was a windy day, witness the lean of the Panicum. Originally the Panicum was to have gone in as landscape plugs, but since they weren't available we, by which I mean Susan Fugate, went with the larger plants. I like it...immediate gratification. It will be interesting, to me anyway, to monitor the Waxmyrtle cultivar 'Don's Dwarf'. The Southern Waxmyrtle is a good evergreen for tough sites (hot, dry, sunny, poor soil) and I think it would be nice to have this selection available at retail nurseries in the Washington area.
Posted by ChrisU at 7:09 AM 2 comments