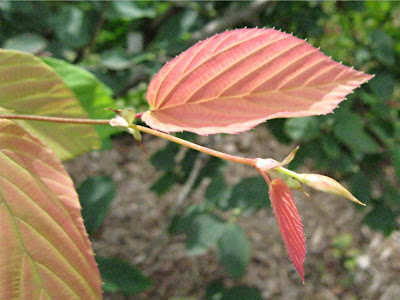 This Corylopsis is one of the many plants that are pushing new growth in response to three weeks of rain following a hot dry summer. This morning I actually noticed flowers on the Styrax obassia in my back garden (in Adelphi). I've never seen that before. Ever.

Fall has finally arrived here. Last night the temperature fell to 45F here. That's 13 degrees above freezing, not the 19F of International Falls, but nice and cool. Wow. It's supposed to stay at least seasonably cool for the next couple of weeks and beyond that....well, we ought to be safely landed in fall.
Posted by ChrisU at 3:05 PM 0 comments 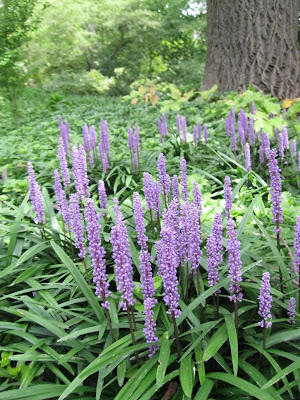 Maybe it's not so much plant snobbery as "familiarity breeding contempt". If I'd never seen liriope before and saw this stand flowering in the Japanese Woodland, I'm pretty sure I'd feel like I'd really stumbled on something special. The problem is that I have seen acres of liriope and I guess I'm just jaded. It is nicer though, here amongst mixed plantings in an open woodland, than it is in a row in the sun between turf and a concrete sidewalk.
Posted by ChrisU at 2:52 PM 0 comments

I'll Remember this Autumn
Posted by ChrisU at 3:05 AM 0 comments 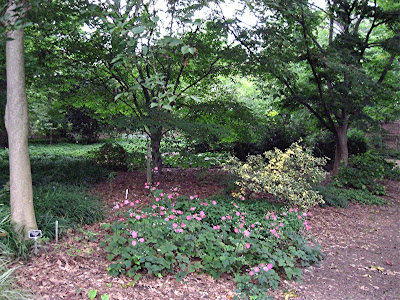 So many groundcovers, Nicely situated trees, and good light made it easy for the Anemones and the variegated Elaeagnus to sparkle.

The volunteers were in today: Julie, Betty, Nancy, and Eugenia. We got a lot done. I know because I hauled away 8 loads of debris. Eugenia pruned the Azaleas along the road in front of the restroom. Sometime after 1:00 and before lunch?!? I decided she'd earned some help. As I crawled around under the plants to cut off long stems that crept along the ground for almost 8 feet, something flashed in my memory and I remembered doing the exact same thing 20 years ago or so. It's curious what can trigger memories.
Posted by ChrisU at 2:55 PM 0 comments 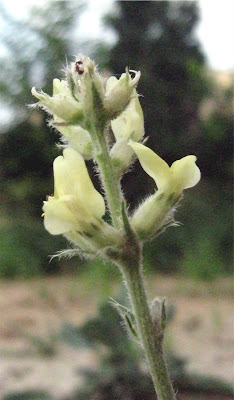 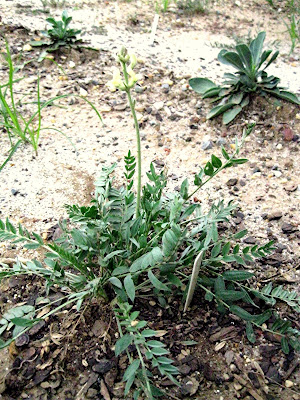 Scott, GrayC, and Kevin T brought the seeds back from their prairie/badlands/... collecting trip. Among their targets, were plants that could potentially be used on green roofs. Brad germinated the seeds, and grew the plants. Some are now planted in a cold frame with soil amended for maximum drainage. It's a beautiful little clumpy rosette, a silver tuft, in the Fabaceae. I have it as Astragalus agrestis, the Purple Milkvetch....a yellow flowered form I suppose.. I'll check the label tomorrow. The genus is astoundingly large; The Wikipedia article quotes a paper by David G Frodin (2004) suggesting there are around 3,000 species in Astragalus. Wow.
Posted by ChrisU at 2:34 PM 2 comments 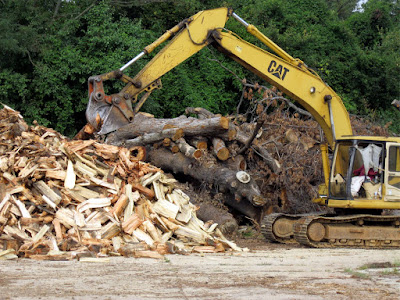 I thought our woodpile was big last year but this year's covers at least the same area and is twice as tall. We-re having our debris ground this week. From the piles of green and brown, woody not fecal, we'll end up with wood chips, wood mulch, and two grades of compost. We produce nearly all of our own mulch and all of the compost we use.

This wicked machine takes the tree poles, some as much as 4-5 feet across and 25 feet long, picks them up and cracks them into these pieces that will then go into the tub grinder to produce wood chips. It's ridiculously powerful.
Posted by ChrisU at 2:24 PM 0 comments

All our rain has brought out the fungi 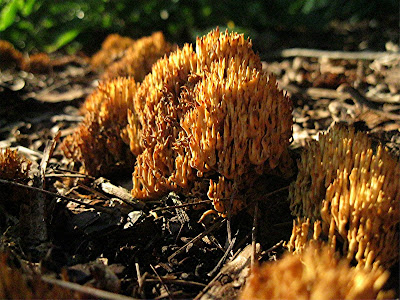 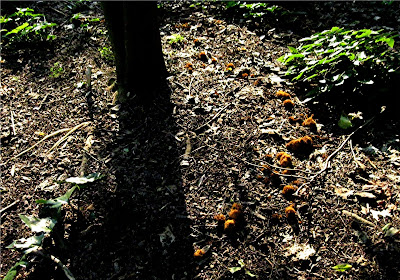 This "fairy ring" ominously circles a Euonymus carnosus in the Asian Collections. For some reason (rotting wood?) I see the best fungi right around this spot. I know I'm old and forgetful; I just searched this blog for fungus and found essentially a duplicate of this post from June 2009. I decided that the plant was Ramaria sp. likely R. stricta. The pictures are better today though. It is interesting that the same fungus and the same "fairy ring" can occur in June or September. Well, maybe not that interesting.
Posted by ChrisU at 4:58 PM 0 comments

The sun was rising over the Anacostia this morning when I got to work, and the near full moon was low in the western sky 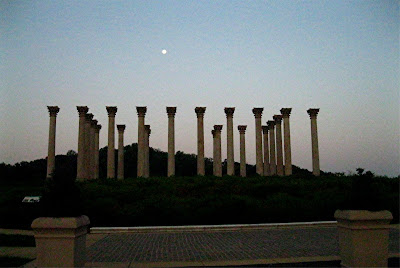 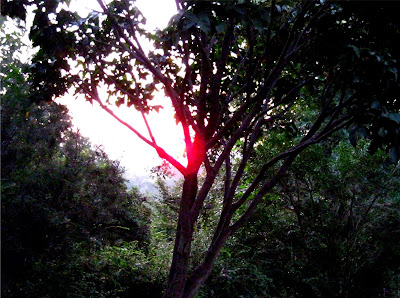 This morning the sun rose at 6:48. This is compared to 5:42 in early-mid June. We're losing just about two and a half minutes of daylight each day now; that's about as bad as it gets. The losses slow gradually up to the Solstice in December. Sunrise there will be 7:27 Eastern Standard Time and that's as late as it gets.
Posted by ChrisU at 4:46 PM 0 comments 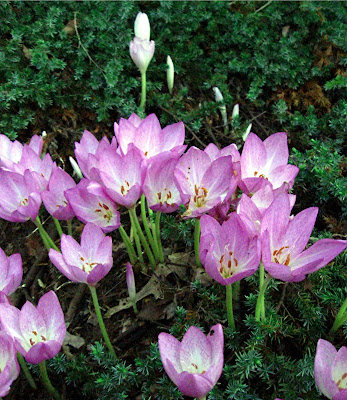 These are just some of the amazing companion plants in this collection. I've also enjoyed the Agastache all summer. I stopped at the Library this morning and of course, their colchicums are flowering as well. Hedychium 'Elizabeth' is too but two of the spikes were broken off. I stuck them in the ground; it's so wet it ought to function as a vase. That's the thing though about waiting all year for a plant and then having something happen....I'll never forget Henry Mitchell and his lamentations about German Iris and rainstorms.
Posted by ChrisU at 4:44 PM 0 comments 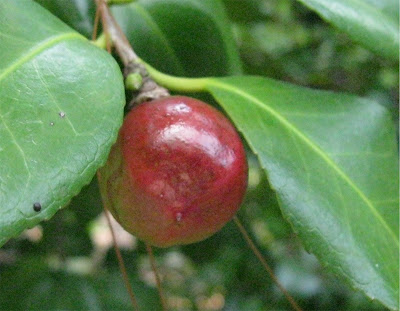 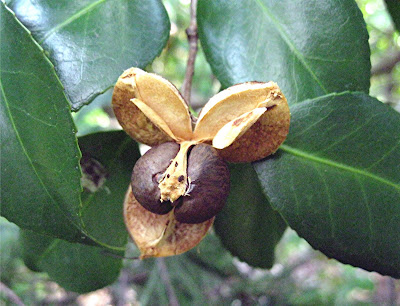 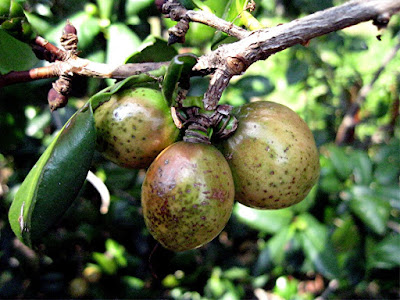 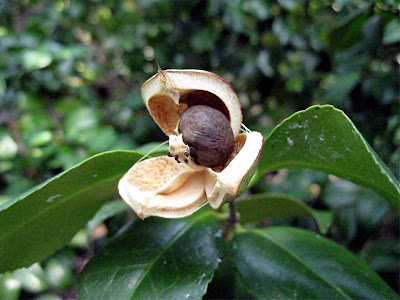 Okay, I volunteered to do three walks through the Asian Collections this spring. One in early March, one early April, and I think the last in late April. There will be 8 weeks between the first and the last so that we'll see the barest beginnings and progress in two jumps to full blown spring. That's not the point though. I was at the computer today thinking about these walks and what to say about them when another one popped into my head. It doesn't rain but it pours. Next fall I'll do a walk highlighting the edible plants in the collection. We do have some interesting specimens: Jujube; Asian persimmons; Hovenia, the Raisin tree; Pseudocydonia, the huge fruited tree quince; a few species of sweet Chestnuts; and so forth. It'll be fun to trek through the collections in the fall with a theme to keep us in line.

Here's where the camellias come in; I was thumbing through Wilson's travels, the chapter on fruits and I wandered over into economic plants and there were the oil trees. I love the greasy fruits of sapindus, but they're too far to get to easily, the Tung Oil tree succumbed to the elements in its second winter, but we have camellias! So I went out and had a look.
Posted by ChrisU at 4:22 PM 1 comments 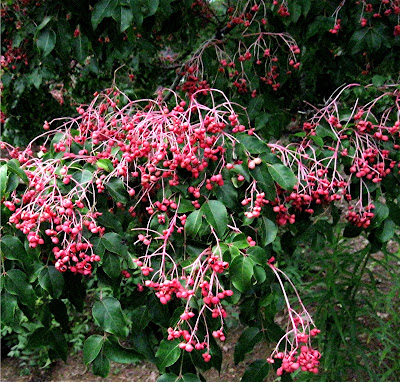 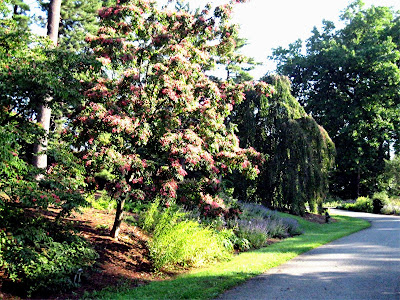 It's mid-September and plenty of fruits are coloring up. At home our large Cornus florida has been under attack from bluejays, cardinals, and doves?! for two weeks. They swoop colorfully back and forth across the garden. The cardinals stay mostly silent, occasionally producing their charcterist call; the bluejays by contrast loud and raucous. It's a good show.

The Euscaphis at the Arboretum are a good show too. You can't miss these plants in the fall and clearly the seeds are abundant. Likely that explains why so many collecting trips have brought back seeds and in turn, why we have so many accessions. Still, it's a good plant with clearly a lot of variation. If you've got to have a lot of something, this might as well be it.

I grew a handful from seed about 15 years ago and kept one. It's now about 15 feet tall and beginning to produce good quantities of fruit. For years I worried that it was self sterile. I got lots of flowers and little or no fruit. And that's almost the best part of the plant. Anyway, starting about 5 years ago, as the plant began to attain some stature, the numbers of fruit that matured increased every year. It's nowhere near the plant above but it's getting there.
Posted by ChrisU at 4:12 PM 0 comments