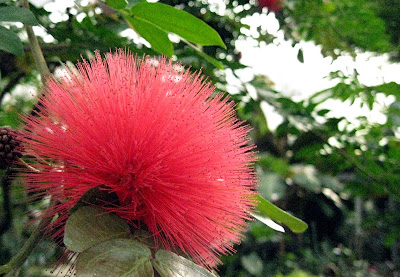 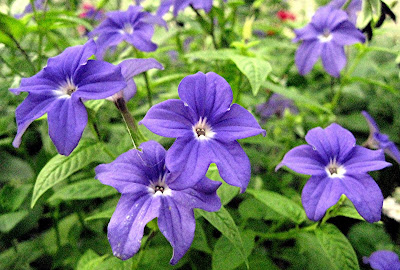 This powderpuff flower isn't a Calliandra, but belongs in the genus Metrosideros, in the Myrtaceae. It's native to the Kermadec Islands, a volcanic chain a long way northeast of New Zealand. This plant has variegated leaves to go with the red powderpuff flowers. the EU Gardening site claims that it can withstand a bit of freezing so it might be a candidate for Florida. The variegated foliage would be pleasant under the lofty Live Oak canopy. Bottlebrushes and Powderpuffs (Caliandra) are plentiful but they are, to my mind, a bit too rank growing. This plant has prettier leaves anBd a more graceful form.

Browallia is one of the first plants I ever in an attempt to have flowers indoors in the winter. Still common as a shade annual, it doesn't stand out like it did 40 years ago. Today there are dozens and dozens of choices in the shady annual sections. It's still works well on a sunny windowsill in the winter but watch out for white flies.

Ti Plants, Cordyline terminalis, don't flower frequently and the individual flowers are small. Still, what with the, buds, the flower color, the wild inflorescence, and that intriguing floral structure, it's nice. 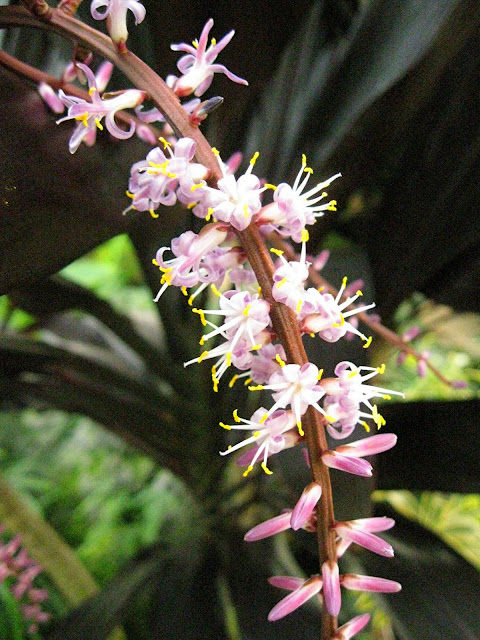 Paramongaia weberbaueri...a beautiful relict of the Amaryllis show at the National Arboretum 6 years ago 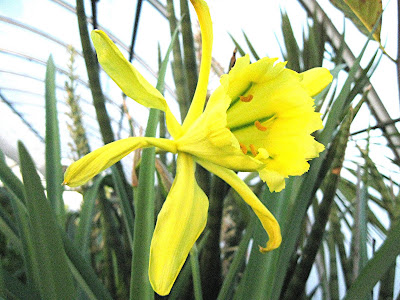 Very uncommon and very beautiful. We have built up quite a population now. Large flowers with a strong and pleasant fragrance open, usually in January. We rotate plant from the greenhouses to the lobby of the Administration building and if there''s more than one flower open the perfume is inescapable. It ought to be more commonly grown!
Posted by ChrisU at 4:38 PM 1 comments

Hamamelis vernalis.....it's hard to find flowers now in Fern Valley, but I knew where to look 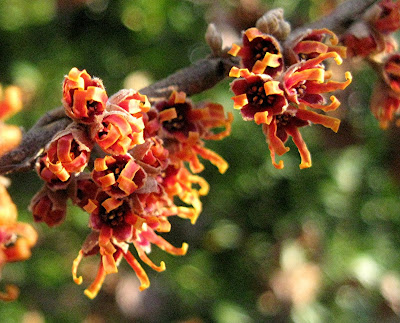 The Ozark Witch-hazel is about the only game in town for flowers, but they're a great color and smell wonderful. At MANTS, the big regional trade show, I noticed that all of a sudden there are cultivaars of our native Witch-hazels, H. virginiana and vernalis. There have , of course, always been innumerable selections of H. x intermedia, the cross between the Chinese and Japanese Witch-hazels.
Posted by ChrisU at 3:06 PM 0 comments 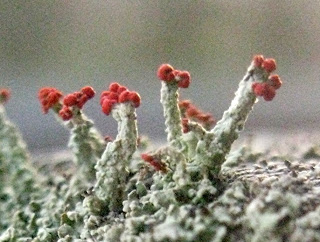 This is one of those plants ? that most of us nature lovers can identify. It's common, it's distinctive, and the appearance suggests the name. These are growing on posts that separate stored marble slabs that were, I think, at one time associated with the Capitol Columns.
Posted by ChrisU at 2:44 PM 0 comments

Pelargonium ionidiflorum and P. 'Spanish Lavender' .....we have 100 or so scented Geraniums in Poly 7; some have nice leaves, some nice flowers 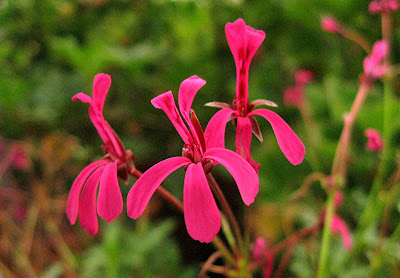 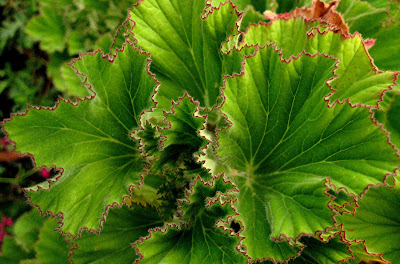 While most of these Geraniums provide a flower or two here and there (in the winter), and some bloom more heavily, none is as constant as P. ionidiflorum. It's from South Africa and retains its inclination to flower in December and January, which, of course, are summer so far as it's concerned. I like it; it's reliable and cheerful.

P. 'Spanish Lavender' is a double-flowered form of P. cucullatum that's also from the Cape. Unlike its more floriferous friend, it has traditionally been used to cure all sorts of ailments. I like it now because the leaves are beautiful.
Posted by ChrisU at 2:24 PM 0 comments 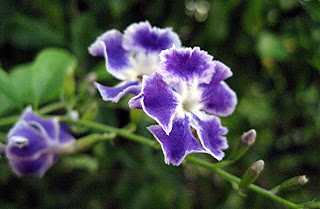 We have a Pigeonberry bush in the Florida garden. It's a landscape standard in Zone 9. There are a number of species and while the fruit is palatable to birds, it's poisonous to mammals. The flowers on ours are a lovely color of blue, but lack this picotee edge. It came with the garden and was 7  feet tall three years ago. I prune it regularly even when it doesn't suffer winter dieback. Last winter it was killed way back by temperatures nowhere near what we just experienced. I can't wait to see it. Unfortunately/fortunately? that won't happen for another three+ months. By then, my guess is that it will have flushed out through the dead branches. I'll clean it up!

Pigeonberry is regularly, though not frequently, offered for sale as a "Container Plant" for decks and terraces. It grows quickly, flowers freely, and doesn't have issues with pests, diseases, or water, so might be a good choice for an amorphous anchor in a large container. The hard part is letting it die during winter, or finding a place for it inside.
Posted by ChrisU at 2:58 PM 1 comments

Tillandsia cyanea, Aechmea chantini, and Aechmea fasciata....there will be Bromeliads in his displays, Brad says 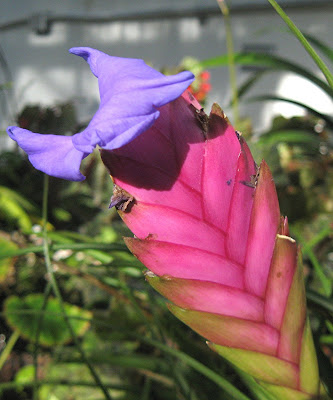 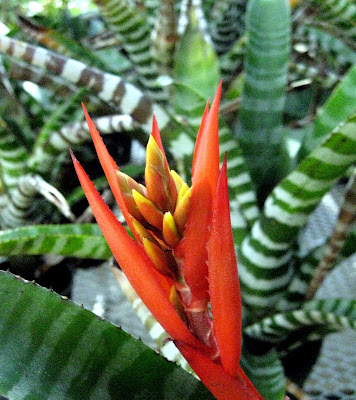 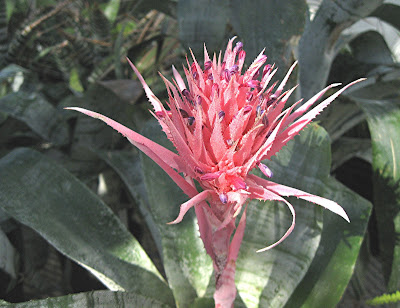 Colorfully evoking tropical rain-forests, bromeliads are members of the Pineapple family and often depend upon water reservoirs, "tanks", to supply both water and minerals. While many are epiphytes, others grow on rocks, utility wires, or other hard surfaces. Spanish Moss, if it truly is a Bromeliad, is the least typical member of the family. Various species of Tillandsia live in Live oaks in the Florida garden, but none flower so spectacularly as the aptly named T. cyanea, in the top picture. The Aecheas in the bottom two pictures have the typical "tank"; apparently entire macroscopic ecosystems exist in the tanks of arboreal bromeliads in the rain forests, sometimes with an amphibian as  the top heterotroph.

Sometime last year Brad admitted his growing interest in Bromeliads. He's been accumulating them for a while now, but I hadn't been in the "warm house" recently and was excited to see these plants this afternoon.  I expect we will see them and others next summer in his seasonal displays.
Posted by ChrisU at 2:42 PM 0 comments 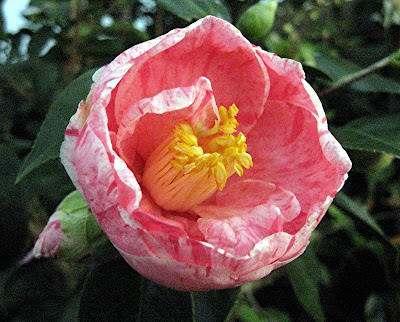 The Camellias from Camellia Forest Nursery continue to flower in Polyhouse 8. This is a variety of Camellia japonica, a sport of 'Lady Clare', who is herself one of the more cold hardy japonicas. When established, both are reputedly hardy to 0-5F.
Posted by ChrisU at 4:19 PM 0 comments

Beech Spring Pond has a layer of ice; the snow is present only on the part of the pond that was frozen when it fell 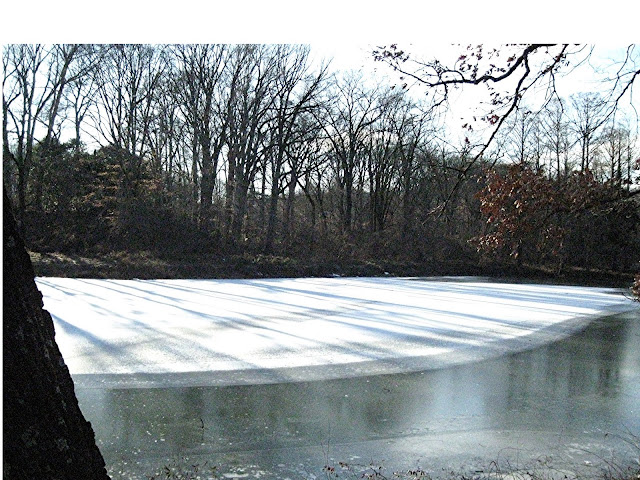 I'm torn between rooting for the forecast warm-up or hoping the cold continues so we can ice skate on ponds and canals.
Posted by ChrisU at 4:11 PM 0 comments

Nathan, clad in safety chaps, helmet, and visor, steps judiciously and quickly away from a falling 28" dbh dead Tulip Poplar 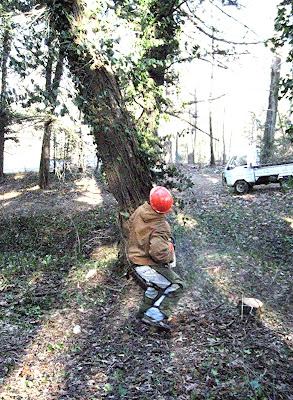 Cleanup continues and we're beginning to get comments.
Posted by ChrisU at 4:06 PM 0 comments 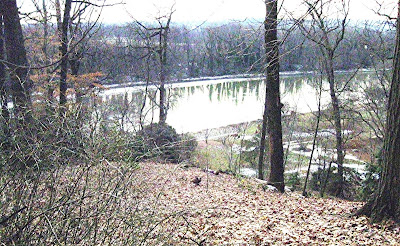 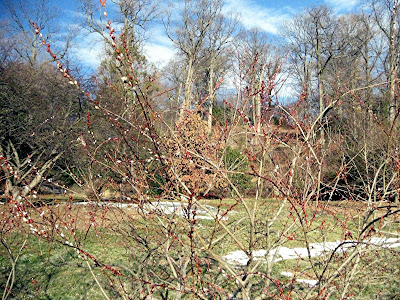 The top picture is a view from the Japanese Woodland down to the Anacostia. The bottom picture reverses directions; I took it standing on the riverbank next to the beautiful Salix chaenomeloides. I am inordinately proud of the condition of the flood plain. It's an institutional pride, not personal pride; I provided neither the impetus nor the labor. Nathan prodded and prodded and finally succeeding in getting a work day scheduled. About 15 of us sweated, toiled, and bled and at the end of the day the plants were free. Ed bush-hogged and has subsequently mowed a time or two. Nathan mulched for a week and has stayed on top of the weeds as they reappeared.

Now beds of coarse mulch made from our own recycle surround the plantings where weedy undergrowth had flourished. Ampelopsis, Celastrus (not the good one!), and Japanese honeysuckle had completely covered this willow last year. Three people or 4? spent half the morning freeing this plant. From this point onward if we can stay on top of the maintenance, we won't have to spend much time to keep the area under control. By we I mean, of course, Nathan.

Common names are funny. Some plants have long standing common names that arose naturally from regular people, not botanists or horticulturists, referencing the plant in day to day conversation. Those names may not be as scientifically unambiguous as a Latin binomial, but they at least they have a level of linguistic validity. Linguistic validity lacking in those common names that were made up because there was no common name. Often these "made up names" are simply a translation of a common name, hence Aventius windfallii becomes Avent's windfall. Anyway my point was going to be that this plant, Salix chaenomeloides, seems to have, on its own, acquired the very reasonable common name of "Giant Pussy Willow". My feeling is that this is a mixed blessing forcing a sort of self-limitation on its uses in the florist's market. Yes, it is a spectacular plant when the buds open, but the buds themselves, giant and red, are wonderfully useful in winter holiday arrangements.
Posted by ChrisU at 6:08 AM 0 comments