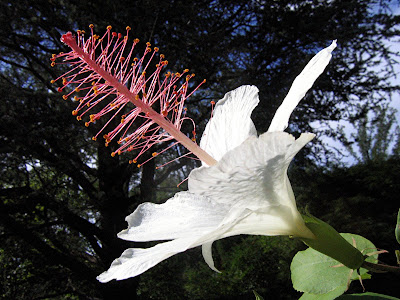 Convalescing this afternoon, I thought, somewhat inaccurately, that a short stroll around Brookside Gardens would be a sensible activity. I was a bit overly optimistic as to my own energy and stamina, but I did make it through the tropicals, the roses, the fragrance garden, up to the Gazebo and down through the perennial gardens. It is wonderful this year. I guess I haven't been there since late spring. I have been missing some good stuff.

With my head foggy, looking at pretty flowers was pushing the limits of my powers, but with the sun lighting them up, I couln't miss these two! 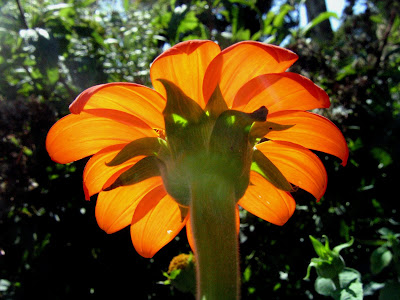 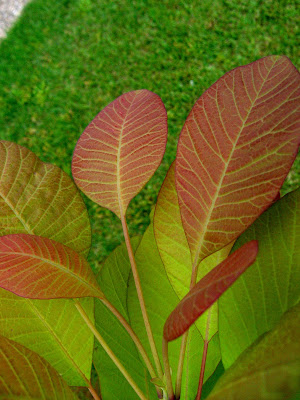 I like this plant, Cotinus obovatus, the American Smoketree. The leaves in the picture belong to a plant that I purchased from the FONA Plant Sale and gave to my mother. What I like about it are the leaves. Their veination, luminosity, the subtlety of their coloration throughout the season; even their petioles are attractive. And the flowers are okay too. This is one of the target species that Joan (FV Curator), Amy (Bonsai Gardener), and I will be after on our trip south next week. The other targeted species is Magnolia pyramidata, a smallish coastal-plain magnolia with attractive flowers with a peculiar scent. Since it is fall and fruits are ripening, there ought to be other interesting taxa available. Richard Olsen has expressed interest in Fringe Tree, and of course, Catalpa.

I found out today that we will be leaving on this trip next Monday, returning Friday. Wow! short notice. Apparently the trip is a result of the sudden unanticipated availability of funds. Don't look a gift horse in the mouth I always say. I am eagerly anticipating new plants, new scenery, new material.

Joan, Hannah (past FV Gardener), and I happened upon a monstrous specimen of American Smoketree two years ago in Pennsylvania on another collecting trip (see picture to the right). It is being reviewed now to be the Pennsylvania State Champion and would seem to be as large as the National Champion. It is curious how the world works; meaningless coincidence or Jungian synchronicity?
Posted by ChrisU at 3:57 PM 0 comments 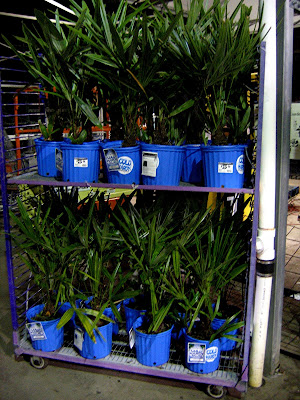 Okay, I have to give credit where credits due. Home Depot Aspen Hill, Maryland and these are Needle Palms, Rhapidophyllum hystrix. If we were in Florida these plants wouldn't be any big deal. Even as far north as the North Carolina Shore, they are sold regularly as landscape plants, but this a Maryland. There are people who would claim, wrongly, but still.....that Aspen Hill is USDA Zone 6. It is surely 7 but that's moot because Needle Palms are hardy in 6b. Hey, they are, in my view, the hardiest palm. Sure there are Trachycarpus and Sabal species hardy to 7 and bunches hardy in 8, which is, paranthetically, what DC effectively is now. It may not last; this winter we could have sub-zero temperatures, but it's been a long time since we've actually had temperatures in the city below 10 F for any amount of time.

Rhapidophyllum is a nice SE Native that likes water. I ignorantly assumed that because it was a prickly palm it wouldn't be discomfitted by spending time without water in the sandy soil of Adelpi, but I was wrong. That poor plant paid the price, but it has been resusicated, revived, and restored and now will have a companion.

I first met the Needle Palm in the Asian Collections at the US National Arboretum in 1990. Despite its being North American, the reigning powers let it live and now its too big to move and too much a fixture to consider removing. You can see it from the road at the juncture of China Valley and Asian Valley. It is a big plant, so if you do get one, give it plenty of room.

Karen and the boys spotted them on a trip to replenish masonry supplies, bought one, and brought it home. This evening Karen had an appointment to meet with a couple and finalize plans for the installation of their "Key West" inspired landscape. (Serendipity!!??) We had talked about this plant and tentatively included it but availability is always an issue. Not this time. A happy customer has taken early possession of their palm. After that meeting, a late trip this evening netted another 4 plants; I'll keep one and now it just remains to be seen who gets the other three.
Posted by ChrisU at 6:09 PM 0 comments