Native Azaleas and early Rhododendrons are flowering in Fern Valley 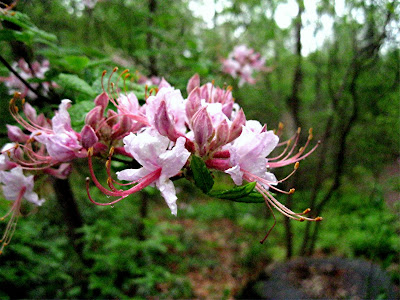 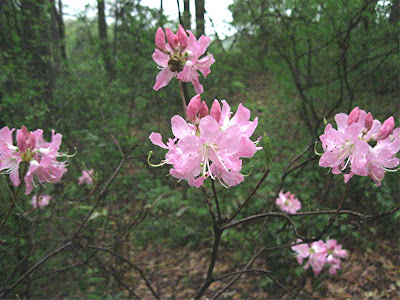 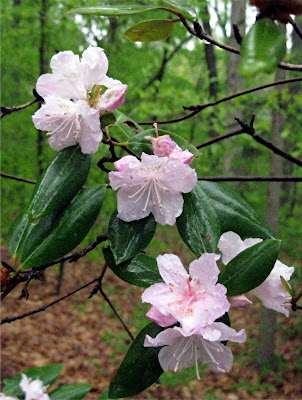 It was still raining at the end of the day but not too hard; I zipped down the path to the Fern Valley pond and checked out the native rhododendrons along the way.
Posted by ChrisU at 4:10 PM 1 comments 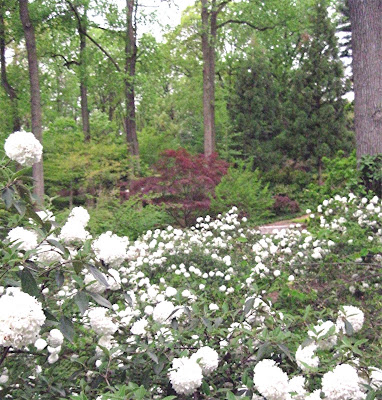 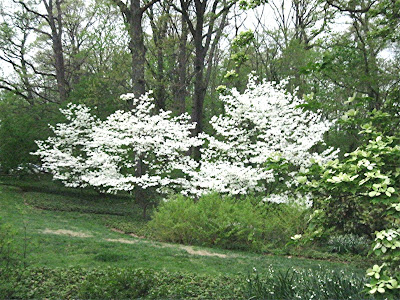 The early Magnolias and most of the Cherries are done for the year. Crabapples continue in the Flowering Tree Collection, Loropetalums are extravagantly colorful throughout the Asian Collections, and of course Azaleas are exploding everywhere. This week the Flowering Dogwoods reached their peak which is a bit deceptive because it's more like a plateau than a narrow summit. Depending on the weather, they can last as long as a couple of weeks before they start to decline. My oldest son, Max, was born on May 6 and occasionally the dogwoods are still good for his birthday. More often their half brown bracts litter the ground under our big tree. Last year was a good year. This year is starting late and, despite a forecast of 5 days over 80F (~57C), I'm betting on their being around for Max's Birthday.
Posted by ChrisU at 3:57 PM 1 comments 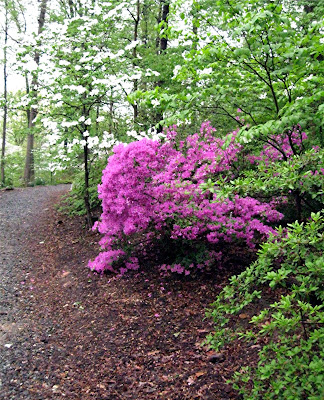 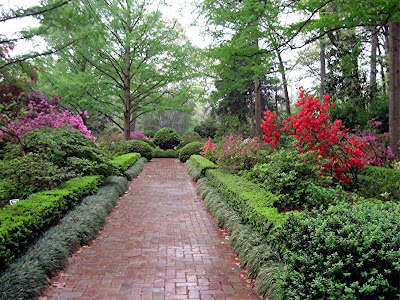 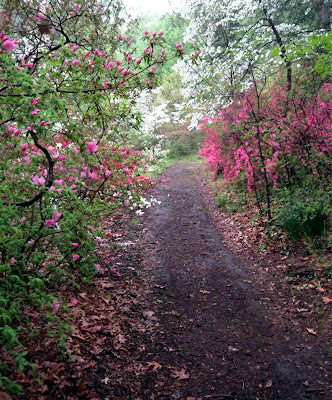 The rain began to fall seriously during lunch and continued into the afternoon. It was too wet to do much in the collection and Tony had sprayed in the greenhouses so they were off limits. I decided to walk through the Azalea Collection. Well, my goodness who didn't I see out there in the pouring rain. My good friend Tom and his friend from Nova Scotia walked up as soon as I parked my Mitsubishi. Shortly thereafter I passed 4 visitors decked in serious raingear, and after quickly looping through the collection, I happened upon our Director, Dr. Hefferan and Tom Sherwood from NBC News. Those pesky azaleas can bring the visitors in come rain or come shine.
Posted by ChrisU at 3:19 PM 0 comments 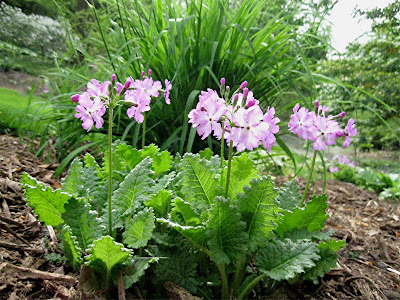 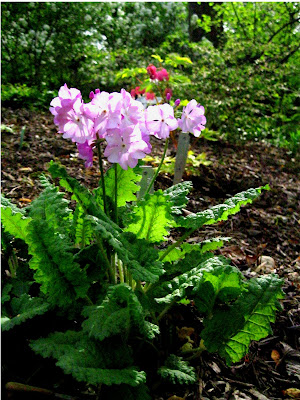 Hey, they're like peonies only with less variability of flower shape; they come in the same three colors: pink, red, and white. Where do all those varieties come from!? Still they're wonderful little additions to the woodland garden. Here in Washington the hot humid summers severely limit our selection of Primulas. For us, the sieboldii cultivars go dormant when it gets hot but I read that with cooler summers and more constant moisture, they remain green through the fall.

There were a few relatively young plants in the garden when two years ago and we added about 6 cultivars last year. Plus I've begun to divide some of the older plants. It's a nice effect.
Posted by ChrisU at 3:13 PM 0 comments 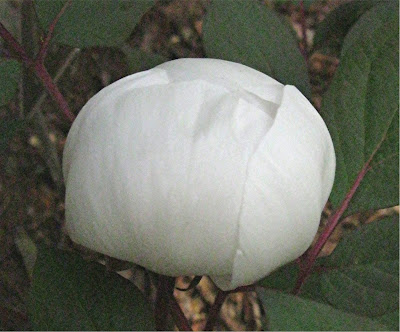 I like this peony primarily for its fruit, but the flowers are nice and when they are white, as this one is, they nicely set off the interesting matte foliage that has reddish tints in spring. We have this growing nicely in various locations in quite deep deciduous shade.
Posted by ChrisU at 2:56 PM 1 comments 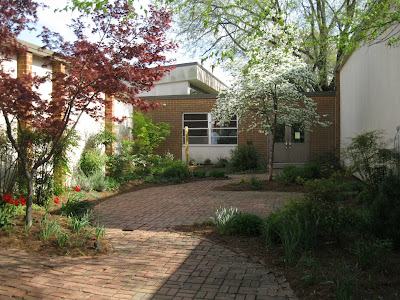 I haven't talked about this garden lately but it's moving along. All I've done for month's is a tiny winter cleanup and some cutbacks. The Library has a maintenance service that takes care of all their grounds. Usually they ignore the courtyard leaving it to me, but this winter they did their own cutbacks(the spireas, good; the Smokebush ???not so sure, but it's at least okay) blew away the last of the leaves and mulched. That was good for me.

I'm excited to see how some of the new plants do like the Sambucus 'Black Beauty'; the foliage ought to be great against the faux stucco wall. 'Basjoo', the hardy banana is in it's second year; it ought to respond well to being in an enclosed area like this. The Needle Palm, Rhapidophyllum is in it's third year and really starting to take off. The yellow Oakleafed hydrangea looked good; it has grown. There are a number of small old roses too that I added last fall. It'll be fun to watch.
Posted by ChrisU at 3:40 PM 1 comments 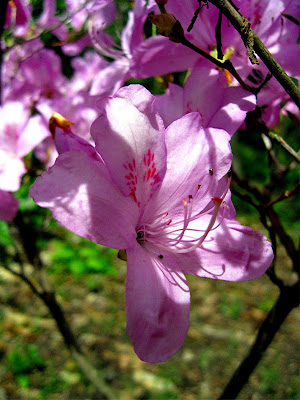 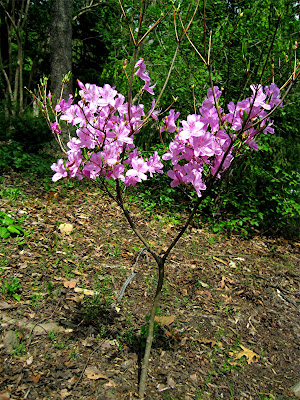 The seeds that this plant was grown from were collected in 1994 in the Wudang Shan mountains in Hubei. I only know what I see and what's in the Flora of China. To wit, it's a smallish (to 3 M) deciduous rhododendron. I noticed it because I was weeding the middle of Bed 3 in China Valley and the sun just lit it up. That made for a wonderful experience but not so good photographs.
Posted by ChrisU at 3:29 PM 0 comments

I got to the Arboretum early enough this morning to see the sun rise through the Dove Tree, Davidia involucrata 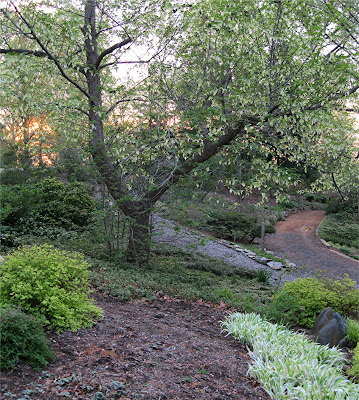 It's somewhat in decline but still looks good covered in it's peculiar flowers. It's a chinese plant with an interesting story. The bright plant in the right foreground is a variegated Iris tectorum.
Posted by ChrisU at 3:20 PM 2 comments 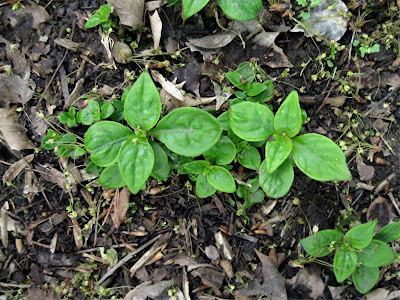 Last winter anyway. I'm always leery when the source for hardiness data for a given plant is the purveyor of said plant. I trust people generally but when there's a vested interest involved....well, it's just better to get your data elsewhere. Ther problem is, of course, that with new plants, there often aren't any sources except the nurseries offering the plant. Anyway Tony, Sean, Dan, et alia are honorable men; look at the description on the Plant Delights website. It almost understates the case. They hint at reports from Zone 6. Well, we aren't in Zone 6 but we threw tiny plans out into bad parts of the open garden last year and as they emerge this spring, it looks like they've been growing underground all winter. Which of course they haven't, but they must have sent out a good network of rhizomes last year that are generating three to four times the number of shoots I remember from last fall. It seems very likely that with careful siting and a bit of coddling they would easily survive a Zone 6 winter or two.They are potentially an exciting deciduous groundcover. Actually, I wonder if they maybe aren't too vigorous. And too hardy. We'll keep a watch on them.

I put a couple small plants into a perennial border last spring but we decided to move them in early summer when they seemed to be a little overwhelmed by the half-days sun they were receiving. Amanda transplanted them into pretty much full shade and they seemed to like it. Their leaves darkened up and they grew at a reasonable rate. We notice though, after a month or so, that apparently a bit of rhizome/root had been left behind and by fall, a substantial colony had redeveloped; by winter, the plantings were essentially the same size. In the fall both groups flowered lightly. The flowers aren't spectacular, but aren't bad for a frost-hardy gesneriad.
Posted by ChrisU at 4:33 PM 0 comments 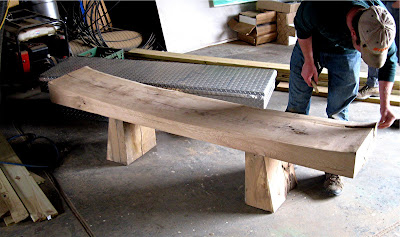 Actually, he completed it. Today we moved it out of the carpentry shop and he'll actually "finish" (ha ha) it with polyurethane. It'll ge out in the collection in a week or so.
Posted by ChrisU at 2:42 PM 1 comments

Lat night's full moon was brilliantly beautiful and this morning's sunrise was warmly cheerful, however...... 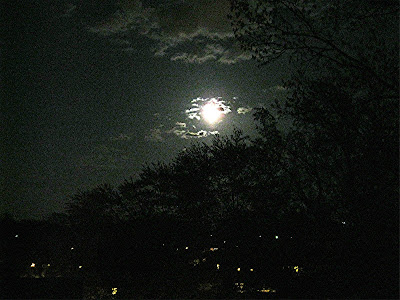 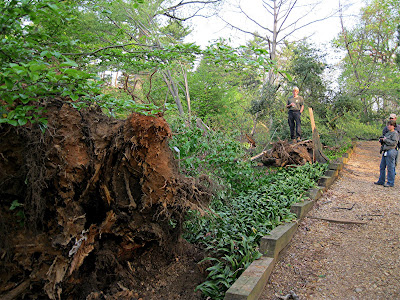 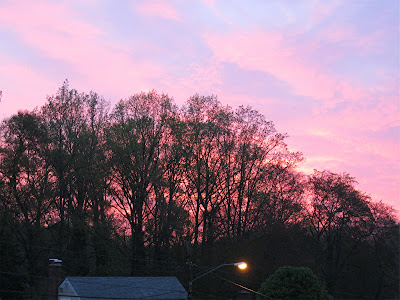 The winds Friday took down two giant oaks in the Japanese Woodland section of the Asian Collections. Feeling pretty good about the beginning of the week I got to the Arboretum about 6:30. I drove past the middle entrance to the collection once without noticing anything amiss. I looped around in the parking lot to see things from the opposite direction and noticed the four cones blocking the main path. With some trepidation/dread, I walked down and found two large oaks had fallen; actually, one uprooted and the force of its fall snapped the second tree off at ground level.......oh my.

They fell parallel to the trail away from where I stood taking the picture. Both trees ended up almost entirely in bed "N" which is relatively long and narrow. The closer tree uprooted but the second tree, the one that Pat is standing on, had rot issues and basically broke off at ground level. From what we could see without chainsaw investigating, we decided that, had the trees fallen in almost any other direction, the damage would have been worse. Small consolation perhaps, but...... This is the same storm system that killed upwards of 25 people farther south, so we got off lightly. And we got some practice rehabilitating disaster areas last year when the giant Cedar fell in China Valley.
Posted by ChrisU at 2:28 PM 0 comments