Anemone x hupehensis....There're still a few good flowers as we head towards December 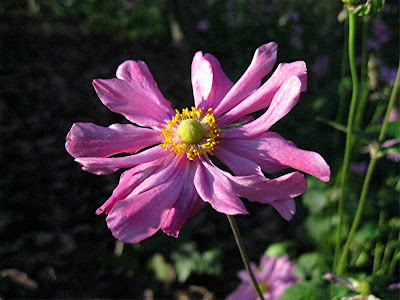 The Asian Collection had visitors out the wazoo today 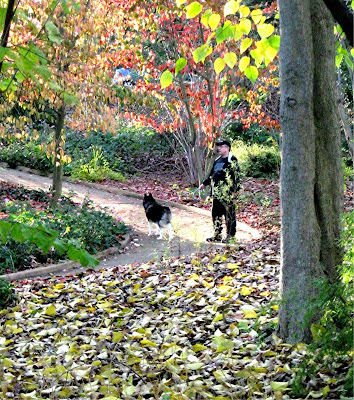 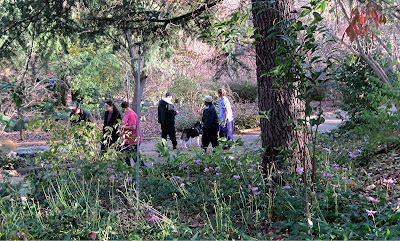 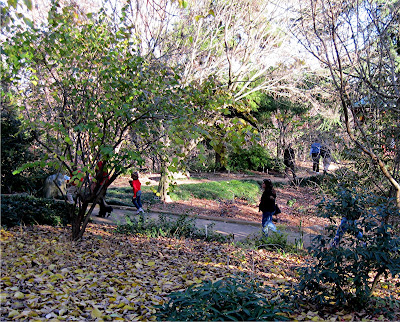 Not a lot of us worked today; most elected to use a day's leave to make a four day weekend. I like time off as much as the next guy but somehow when I take these four days I'm always bouncing around looking for something to do by Saturday afternoon. Anyway, I came in with every intention of blowing leaves all day. It was not to be. We had more visitors than I've ever seen, even in spring. So I did quiet things and a pleasant day was had by us all.
Posted by ChrisU at 3:24 PM 0 comments 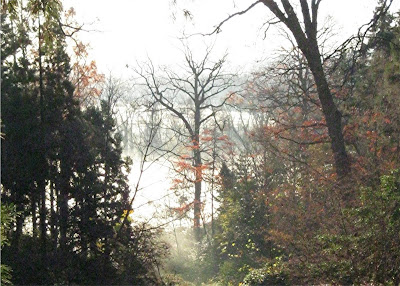 I don't recall ever seeing anything like this effect. As the morning heated up, which it did rapidly, the fog quickly dissipated leaving the day sunny, warm, and pleasant.
Posted by ChrisU at 3:15 PM 0 comments

Salvia guaranitica against an impressive background 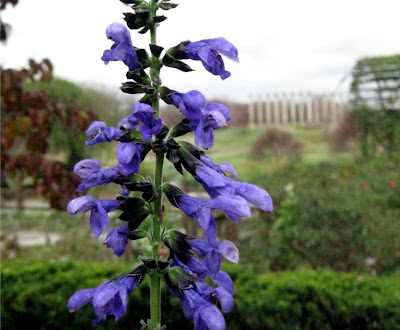 Many, most, of the Salvias are from the south, Texas say, or Mexico. It takes a lot of heat to get them going and they often don't get started flowering heavily till late summer. I often feel that they have been surprised by the cold temperatures of fall. Then they're cut down in their prime. This fellow is still standing tall and proud today.
Posted by ChrisU at 12:09 PM 2 comments 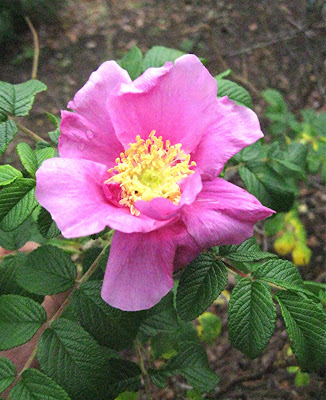 I went to the Herb Garden today looking for flowers because it's been....well, gloomy for the past few days. There were dozens of roses flowering well but the rain had destroyed or at least tarnished most of the flowers. Rosa rugosa is tough though; this flower took the weather in stride.
Posted by ChrisU at 12:06 PM 0 comments

I'm thankful that the plastic is on the Polyhouses, that the jet tubes are running, and that the heaters work 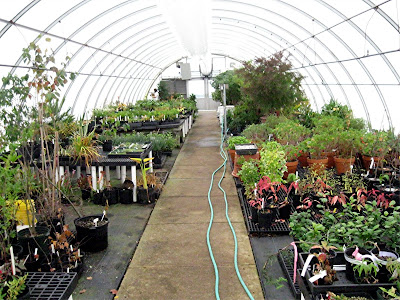 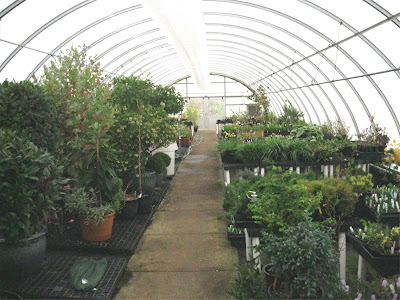 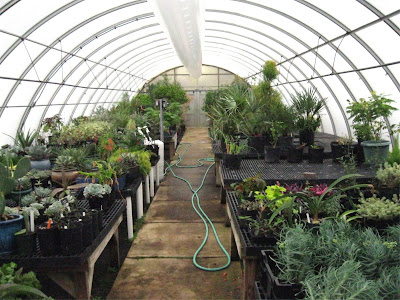 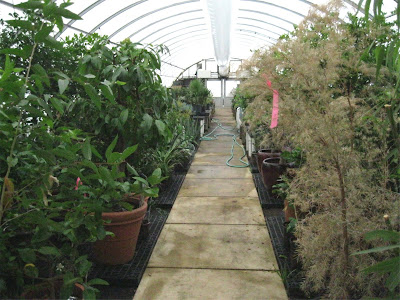 These plants have settled in for the duration of fall and the whole of winter. I wonder if they're dreaming of spring?
Posted by ChrisU at 12:02 PM 1 comments

This is not your grandmother's Thanksgiving fare....Brad breaks out the Cactus fruit 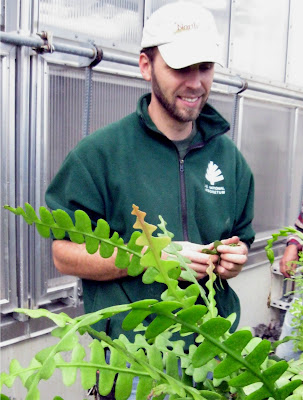 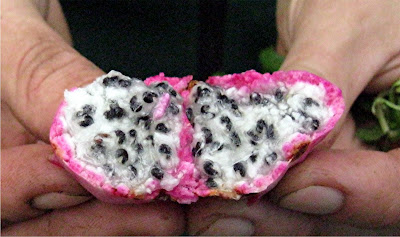 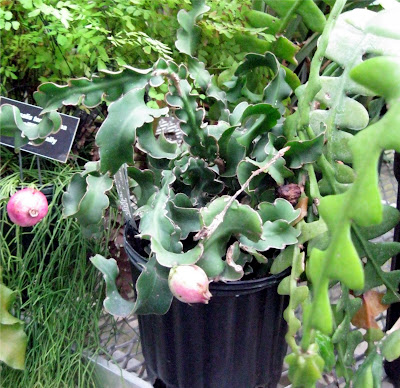 He did say though, that the fruit from the Fishbone Cactus, a piece of the leaf is visible on the right hand side of the bottom picture, actually tasted better.
Posted by ChrisU at 11:56 AM 0 comments

I prefer the "Glorious" phase of fall, but this "brown and wet" phase.... 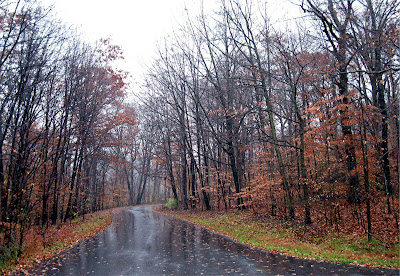 It's all right. Anyway, next year we'll have spring and summer and fall all over again.
Posted by ChrisU at 4:15 PM 0 comments

We had geysers today in honor of the rain 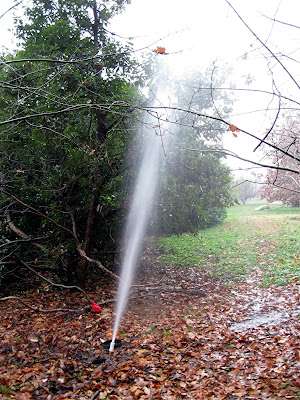 The irrigation contractors finished winterizing the system today. It rains steadily most of the day and drizzled the rest. I had to admire their persistence.Carole and I went out yesterday with metal detectors, maps, and measuring wheels yesterday and located the quick connects on the Flood Plain. They are, as you could surmise, the low points of the system so the whole "blowing out the system" works a lot better when we open these valves.
Posted by ChrisU at 4:10 PM 0 comments 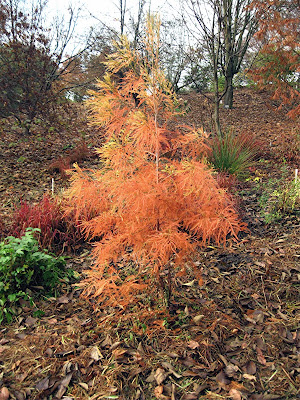 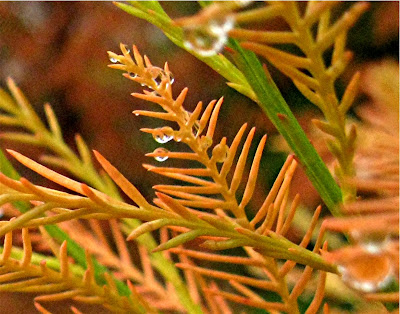 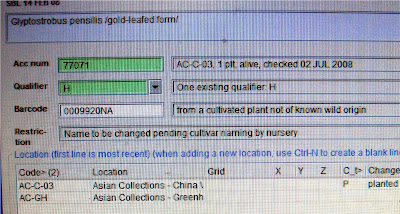 I see that Adrian Higgins included it in his gallery of fall foliage at the Arboretum. (in the Washington Post) I've been watching this particular plant myself for the past three weeks; the rusty-orange color is rich and has been persistent. It lives near the path which worries me a little bit as it will grow to be a tree of some size. I expect we'll need to move it, prune it so that it ends up overhanging the path, or remove it at some point in the future. Procratination will, of course, limit our choices to the latter two.

Glyptostrobus pensilis, a deciduous conifer, is the last species in what was a circumboreal genus millions of years ago. It's range has been narrowed to parts of southern China and a few locations in Vietnam. Actually, the Chinese Swamp Cypress is believed to be extinct in the wild though, as most references note,it has been much planted along the banks of rice paddies where its roots provide stabilization and protect against floods. It's a member of the Cupressaceae, closely related to our own Taxodium and shares the curious characterist of producing woody "knees" that grow up from the roots into the air like stalagmites. Ours lives quite happily in an often soggy area in the middle of China Valley.
Posted by ChrisU at 4:31 PM 0 comments