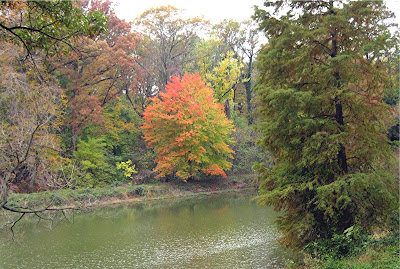 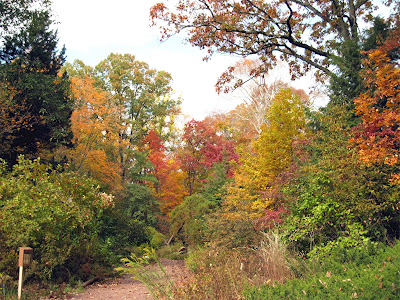 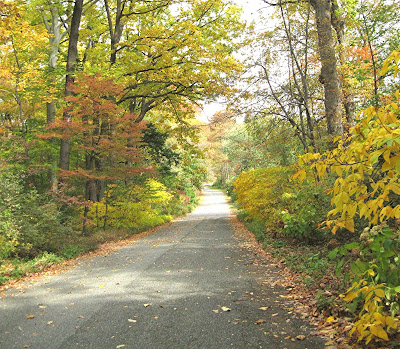 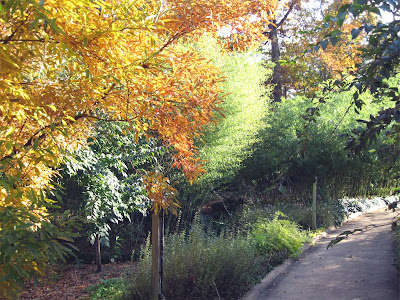 From the Top: a view across Beechspring Pond; Fern Valley looking down the main trail; Fern Valley the view along Crabtree Road; China Valley near the entrance

Falll always makes me feel so.....used. This week has been spectacular, next week will be nice, then the season will dribble away (hey GrayC) and it'll be cold and gray. I guess that's a bad attitude and it'd be silly to not just enjoy things.

The China Valley picture is a slightly wider view of an area that the volunteers have really whipped into shape this year. The link is to a picture from the end of August this year. All the plants in the older picture are in the one above, but the view sure has changed.
Posted by ChrisU at 3:08 PM 1 comments 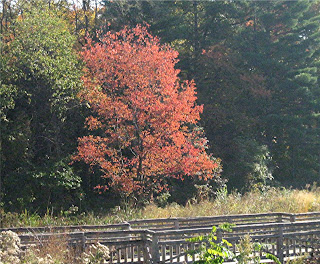 Epimedium lishihchenii.....this Chinese Epimedium is one of my favorites 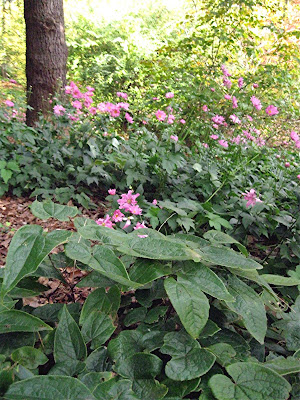 It's in the top two. And we must have almost 100 different epimediums in the collection. The drift of anemones in the back is nice too!

The collection notes describe finding it on a wooded slope with a rich understory. I chopped off a piece of this large clump, and Betty and Terri divided it and replanted it in an area that's clearly capable of a rich understory, and is more visible than the original clump that's buried deep in a large bed.

The plant is beautiful with huge dark green leaves. It's an "evergreen" epimedium and really is ornamental in the winter. The leaves turn a nice purpley color. It has cool large yellow flowers that I've photographed but can't locate right now. Possibly I deleted them. That'll give me something to do this spring.

Mt. Hamilton in its fall glory. Its summit is the highest point in the Arboretum 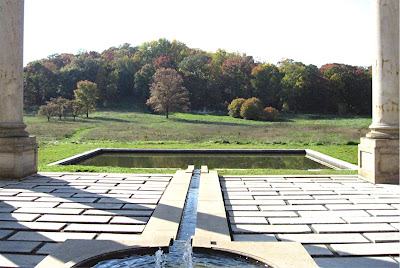 Standing inside the Capitol Columns, I'm just about 85 feet above sea level. The peak of Mt Hamilton towers over the columns by 150+ feet. It's really not nice, or even accurate to say it's less than a hill; it's a perfectly respectable hill, it's just not a mountain. The Azalea Collection lives on the south and west slopes. The west side, I faced west as I took the picture, currently exists as natural forest. A few things have been planted there over the years, but by and large it's native.

A week or so ago, Nancy Luria forwarded an article from The National Republican on June 22, 1880. It was a rambling essay about the areas adjoining Gallaudet University. The prose is romantic, as "nature essays" were in the 1880's, florid even. I always enjoy reading historical accounts of places that I know. This did not disappoint, though it may be a stretch to call it a historic event. No one seems to know the origin of the name "Mt. Hamilton", but the article references two earlier names. Mulligan's Hill, name for "...an old hermit of that name, who retired to it's picturesque seclusion about the time of the Bladensburg races..." "Bladensburg races" here refers to the infamous Battle of Bladensburg (1814) where a force of British infantry overwhelmed a somewhat larger, if ragged, force of US militiamen, routed them, entered the city, and burned the Capitol. The implication is that the hermit was one of the thousands of militiamen that broke and ran through the streets of Washington, and his shame drove him to sequester himself on the ferny slopes of Mt. Hamilton. At some point during the ensuing 66 years the name changed to "Fern Hill". Also the title of one of my favorite poems. No matter. And somehow it became Mt. Hamilton. Lynn Batdorf, one of two unofficial Arboretum historians, assures me this is not a reference to Alexander Hamilton, who, died after being mortally wounded by Aaron Burr in a duel at the Bladensburg Dueling grounds. It's a small world.

The essay continues rhapsodizing botanically and touches on a couple of interesting plants: Magnolia virginiana, the Sweetbay, and Epigaea repens, Trailing Arbutus. "The graceful and odoriferous magnolia has its favorite home in the marshes of the Anacostia east of Kendall Green..." We do indeed still have the remnants of a Magnolia Bog near the Anacostia River at the NE corner of the Arboretum. "In these woods the trailing arbutus is found in profusion, almost the only place about Washington where it can be had without toil and search" Trailing Arbutus still exists in a handful of sites on the slopes of Mt Hamilton 131 years later.
Posted by ChrisU at 3:29 PM 2 comments

I drove right by artist and easel, then turned around and went back for a look People paint regularly at the Arboretum sometimes alone, sometimes in groups. My brother Parke was a painter and I find myself interested in our artists. This is Russ Bogdan, and he gave me permission to shoot over his shoulder so I could capture both his painting and it's subject (and a back view of the artist). Notice how much better a job he's done painting the sky than I've done photographing it!

I'm not an art critic and so have no right to say this, but sometimes you can just look at something and know it's very good. I don't know if Matt's arbor will make the painting or not. Maybe I'll never know.
Posted by ChrisU at 3:47 PM 0 comments 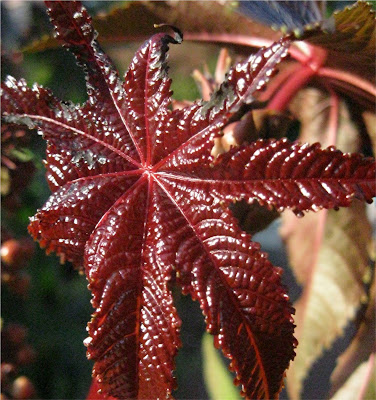 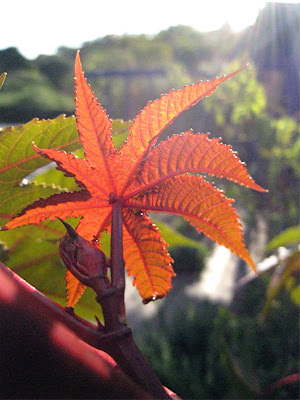 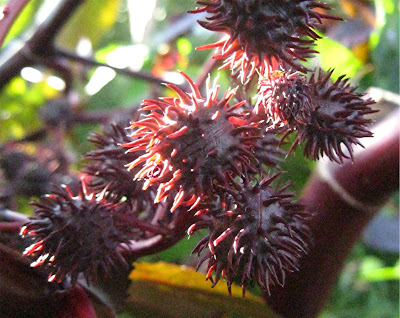 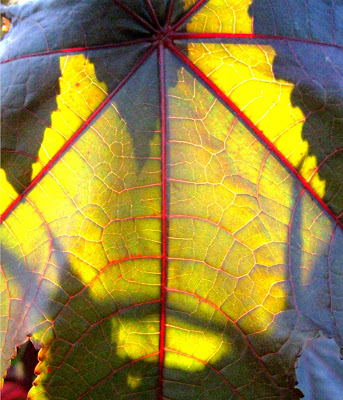 I gave up growing it myself because of, well, you know...ricin, it's poisonous. Very very poisonous. Still, there's nothing to tempt anyone to eat it so I'm thinking it's also very very safe. I guess it just creeps me out. I appreciate the fact that GrayC grows it in the Herb Garden and I can check it out.
Posted by ChrisU at 3:37 PM 2 comments 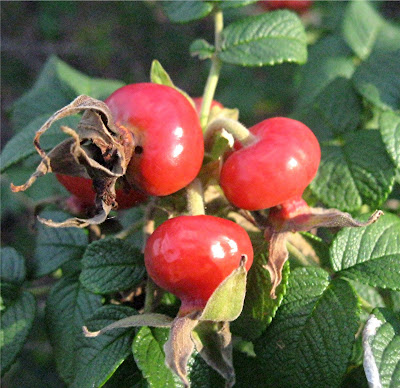 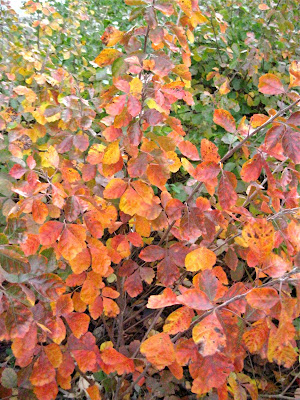 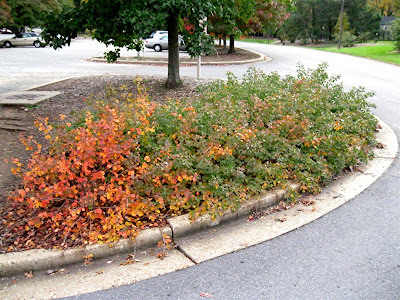 I mean this individual plant, I walk past it once in the morning and once in the afternoon. But I do like the cultivar 'Gro-low'; the species grow to 8 feet or more, this selection gets less than half that tall. It's a "solution plant", not for every location, but if you need a tough plant for a hot sunny site, and you like fall color, this will do the job. Plus it's a native, or at least a selection of a native. When I did designs for Behnke's, I'd occasionally have someone call up who had a hot dry hill alongside the driveway or a property edge, not the commonest problem, but hey, we need different solutions for different sites!

This is just the western tip of a longer planting that includes Rhus typhina 'Tiger Eye', a golden selection of Wax myrtle, and Itea virginica 'Henry's dwarf'. These are all tough plants, rarely troubles by pests or diseases. The Planting extends 75 feet or so out of the picture to the left (east) along quite a steep 30 foot wide slope. I like the fact that Brad chose these ultivars (of native plants) because their potential needs to be showcased. All but the golden Morella are readily available; I see them in Home Depot. Still, showing ways to use them was a great thing to do.
Posted by ChrisU at 2:54 PM 0 comments 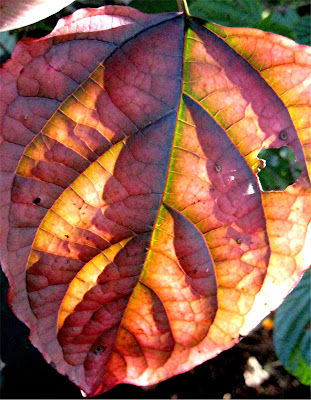 I spotted it on a garden tour at Jim and Dan's house yesterday. They hosted another horticultural salon. I took dozens of pictures of people but I'm not good at that and I deleted them one at a time for various reasons. When I was done there were three pictures of this leaf left. I didn't photoshop the color; I just held the leaf so that it was backlit by the sun. The more I look at the more creepily pumpkinesque it seems.