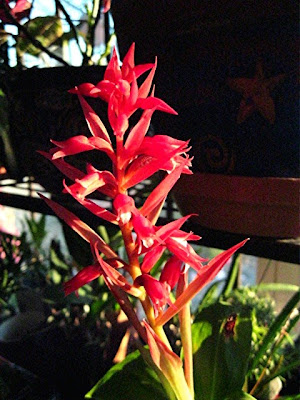 Hey, plenty of orchids are demanding. Many need greenhouse conditions, some need cool nights, some constant humidity, lots need a diurnal temperature variation greater than exists in most of our homes. Many of us have figured out how to grow Phalaenopsis, Paphiopedilum, and a handful of others. Here's another orchid you can really grow!

I got this three years ago from the NCOS Orchid Show at the Arboretum. It flowers dependably every winter. It doesn't seem to care about humidity or to need much light; I give it less light, even, than Phalaenopsis. I don't remember ever seeing it until three or four years ago. Last year though, there were some larger specimens at the Smithsonian Orchid Show. They have inspired me to take better care of mine in the hopes of getting a better return. Repotting to a larger pot is in order.
Posted by ChrisU at 5:11 PM 0 comments

Rubus cockburnianus 'Golden Vale' at the entrance to China Valley 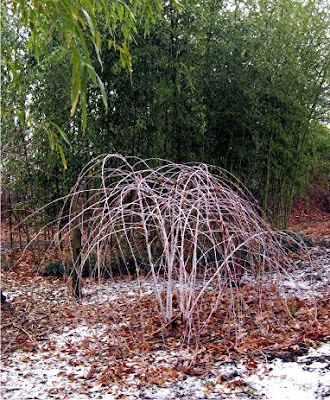 Sometimes when I can''t sleep at night I invent humorous things to say should anyone ever utter this specific epithet in my hearing. I've been waiting , oh, 20-odd years and I've just about given up hope. I guess people just have too much good sense to verbalize some things.

Anyway, this is one of those "if you see it, you've got to have it" plants. In spades. These waxy purplish canes with a bluish bloom are outstanding now and in season the foliage is bright yellow, viridescing only the least bit in summer. It does tip root so go around in the spring and elevate it. Or, if it does root, give the plants away.

The bamboo works well as a backdrop, though any evergreen or even architectural structure might work as well. It really does needs a backdrop. I tend to thing the need for dark evergreen foliage to highlight winter accents is generally overstated but this is a plant that seems to call for it.

The first time I saw one of these ghost-stemmed Rubus was at Brookside Gardens just after it opened. An area they designated as "the winter garden" held an Acer griseum, a few Chimonanthus, the Rubus, a lot of Hellebores, and I forget what all else. It was my first experience with most of those plants and I spent many years aiming my gardens at winter, or at least including a little something for winter.
Posted by ChrisU at 1:55 PM 0 comments

Gymnocladus dioicus, Kentucky coffeetree: you've got to love these pods 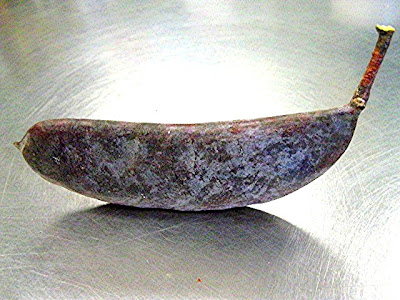 They're big and they're coarse. No wonder I like 'em.

Someone brought a couple in so at lunch I played with them on my favorite backdrop, the lunch table. For years I coveted Decaisnea fargesii for it's bluer pods. Some day I'll grow it, but, as blue as it can get, I doubt if it can replace this in my heart.

There is a copse of Coffeetrees in the National Grove of State Trees. It was, not surprisingly, the state tree of Kentucky. Because it's functionally dioecious, you need a boy and a girl for fruit formation. According to the literature the early settlers of Kentucky did actually use the large seeds as coffee substitutes. Wow; two days in a row of culinary alternates. Odd.
Posted by ChrisU at 3:37 PM 0 comments

Alocasia portadora....things are starting to happen in Brad's tropical greenhouse 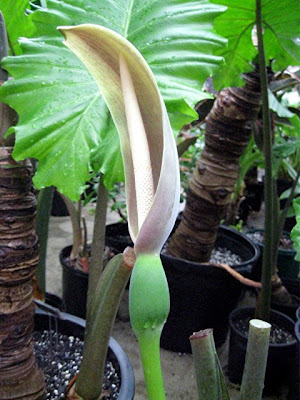 I don't know if this is photoperiodically mediated or not. I remember first working in a greenhouse with tropicals and being impressed that the Spathiphyllums and Citrus initiated bud formation immediately after the days began to get longer. Some tropical are ruled by daylength, more, I think, by moisture.
Posted by ChrisU at 2:56 PM 0 comments 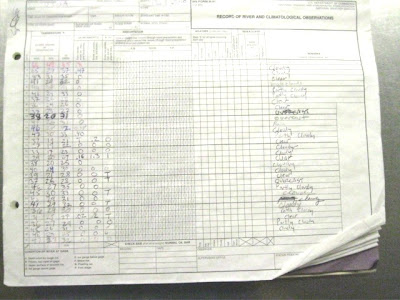 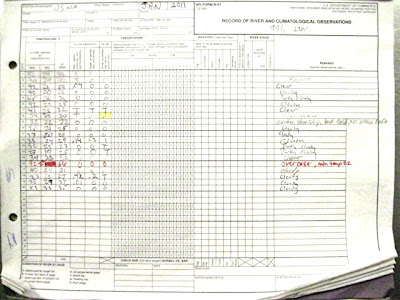 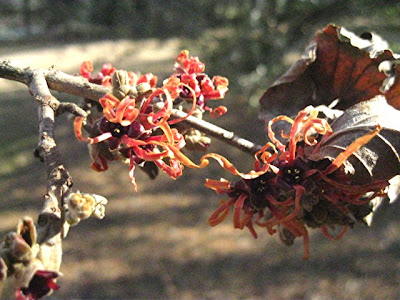 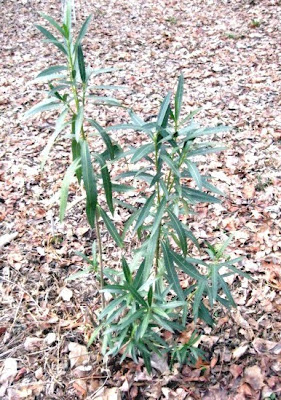 Tony left the page for December on the weather pad so I could look back two almost two months easily. We haven't had any real cold days; we've had lows in the mid teens Fahrenheit half a dozen times with two more forecast this weekend. On the upside we haven't had any single digits or negative numbers. On the high side there haven't been any days in the 50's or 60's. I expect both of these factor into the perfect health of the Oleander in the bottom picture. The leaves are perfect; there are no signs of stress. I know it's not even February yet, but the ground has been frozen off and on for at least a month. I will continue to monitor it.

Hamamelis x intermedia 'Jelena', the middle picture, has just barely begun to unfurl its petals. It's a bit late in the season for that, no doubt attributable to the same weather pattern. Cold but not too cold, and if it were any warmer, they'd have opened wide these past two warm days.

It's been kind of a funny weak weaherwise; we had aminor snow/icestorm Monday night, it stayed near freezing all day Tuesday, but yesterday and today were both over 45F. I worked outside some. This afternoon I cut back Climbing Hydrangea and pulled Ivy. It was great; the ability to function outisde mid-winter is one of the good aspects of Washington weather.Unfortunately now that I'm sitting down inside where it's warm, my back is tightening up and my legs ache. I guess there are advantages to summer.
Posted by ChrisU at 2:26 PM 0 comments 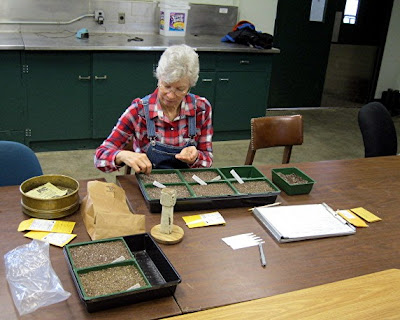 These are Fern Valley seeds and include grasses and Dalea, Prairie Clover.
Posted by ChrisU at 2:44 PM 0 comments 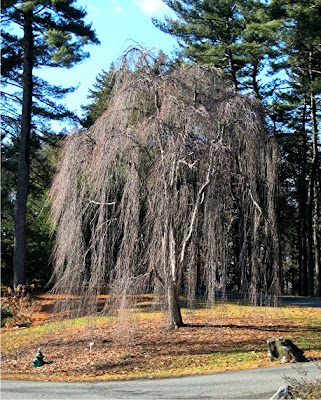 Yesterday's ice melted and the sun came out. This would be a spectacular specimen anywhere, but sited on the corner....it's even better!
Posted by ChrisU at 2:41 PM 1 comments

Aframomum melegueta, Grains of Paradise. It's not contraband but it's cool 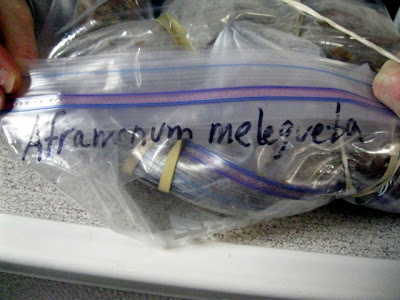 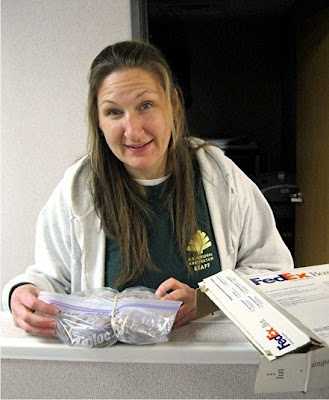 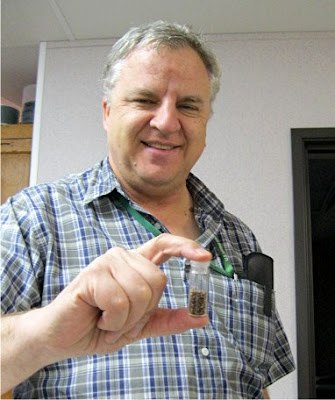 I love the obscure....and plants and spices and cultural history and anecdotes. Wow I hit the jackpot today.

My desk, in our temporary quarters, is across the aisle from the mail-room so I heard a curious exchange between (Dr.) Alan Whittemore (below holding the spice) and GrayC (middle holding the package with the roots) at the end of which GrayC acknowledged that yes the FedEx could be hers, was hers, and she was excited about it. Excited about roots of Afromomum melegueta, a member of the Zingiberaceae native to West Africa. It was and is an important plant with various medicinal and culinary uses. The seeds are rich in volatile aromatic ketones, highly piquant, and used for seasoning. For at least 2,000 years it's been known in Europe and was extensively used as a substitute for black pepper, Piper nigrum, in the 14th and 15th Centuries. It was also used in divination ceremonies, and the production of various alcoholic beverages though over the years those used dwindled almost to nothing though it remains an important element in the cuisine of West and North Africe; today it's used in the brewing of Sam Adams Ale.

Anyway, Alan, a taxonomist and ruler of our herbarium, told GrayC and Chris C this story, in greater depth and with more accuracy; Alan has more facts at his disposal than anyone I know. GrayC was motivated to hunt it down and did and here we are. I eagerly anticipate seeing the plants and ultimately tasting the seeds. Actually, I'm not going to wait, I'm going to track them down this weekend.
Posted by ChrisU at 2:02 PM 2 comments 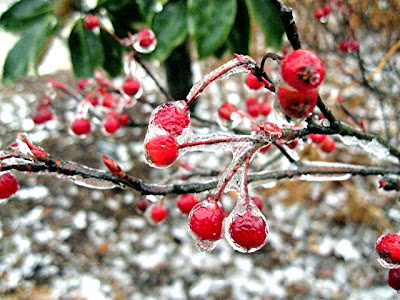 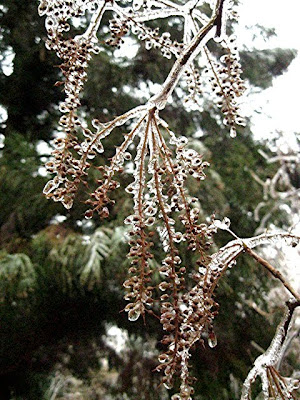 The sun never came out which was both good and bad. Bad because there weren't and cool shots with the sun refracting through ice, but good because the ice stayed around so we could enjoy it all day.

The Aronia is just inside the entrance to the Bonsai Penjing Museum and the Clethra is along the path to the Pagoda in the Asian Collections. I'm always surprised by how long Aronia fruit lasts. It would seem that a nice nutritious native fruit would have a lot of animals after it but they often seem to spoil on the plant.
Posted by ChrisU at 2:35 PM 0 comments

Ice on the Herb Garden 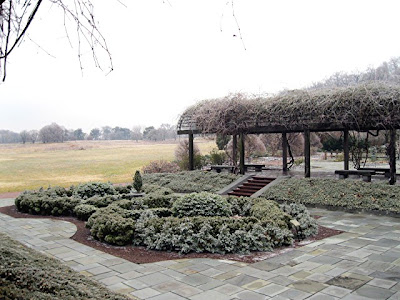 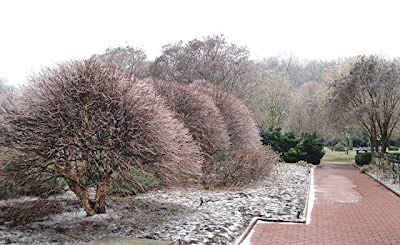 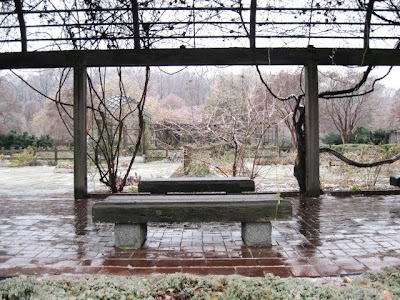 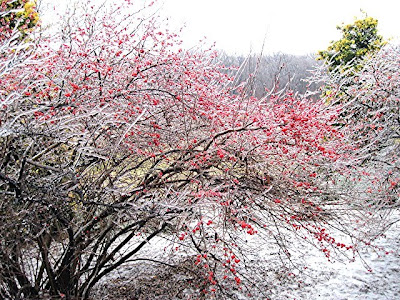 It wasn't a big ice storm but temperatures didn't rise as anticipated and the ice lingered.
Posted by ChrisU at 2:25 PM 0 comments

As a general rule I don't tell people what to do or what websites to visit, but here's a "must read" blog

I don't want to sound arrogant but I have to be honest. (good sentence huh? funny) I rarely read anything about gardens, gardening, or design that I don't know, haven't read, or haven't heard before. I've been in this field for over 40 years; I grow plants, read about plants, photograph plants, write about plants, schedule vacations and trips to see gardens or interesting habitats, garden obsessively, and I've designed over 1,000 gardens.

When I see there's a new post on Thomas Rainer's Blog, I get excited.... I've yet to be disappointed.Grounded Design: musings on the form, meaning, and expression of designed landscapes.
Posted by ChrisU at 3:36 AM 1 comments

Which wouldn't normally excite me but hey, it's been dry. There was okay rain in September but nothing in October and nothing till the end of November.That's two basically rainless months. Then one good rain and then nothing more till the end of December. We found things dry December 27 that I've never seen dry.

But it did rain an inch while we were there, today we got another and I see three consecutive days of rain in the 17 day forecast. So things look good. The snapdragons and pansies we stuck in will at least live a month and the Hippeatrum x johnsonii that were nosing out of the ground when I left will flower though I won't be there to see them. Life is good.
Posted by ChrisU at 4:06 PM 0 comments

I went to the mother of all horticultural salons yesterday and this is the only picture I took!!>>!! 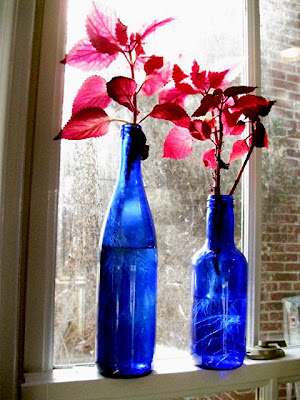 Jim Dronenberg and Dan Weil have been hosting these gatherings at their pre-Civil War home outside Brunswick Maryland for years. I've been lucky enough to attend more than a few of them and it's a remarkable experience to be surrounded by all that knowledge and experience.
Posted by ChrisU at 1:16 PM 0 comments