"Among the Ancients" redux

It's been cold, <40F all day; the heavy rain of this morning has given way to driving sleet and snow. All this a few days short of November. Not usual here. I've been alternating between bringing tropicals, houseplants, and orchids indoors and reading Among the Ancients. And I've spent a lot of time this week thinking about Old Growth Forests, Joan Maloof's campaign for preservation, and my post about the same.

First off, I have to say that the book got short shrift from me . It's really a wonderfully written, informative long essay, broken into chapters, each one dedicated to a particular site in each of the states east of the Mississippi. While the narrative is basically a melange of historical, scientific, and personal anecdotes, threaded gracefully through it is a cogent argument as to why we need to make an effort to specifically preserve and create accessible Old Growth.

It's an appealing and unique idea to make the preserves accessible to the public. Hey, I guess that's the point. In the chapter on New Jersey's Saddler's Woods, she explains why land trusts, almost universally include a management plan that includes cutting. I'm not on real solid ground here, but from what I understand, the vast majority of land currently preserved in a way that would allow for the redevelopment of Old Growth forests is wilderness area. These are barely accessible; most are far off the beaten path and access is severely limited.

Some of the people I spoke with were a bit put off by what they perceived as the demonizing of foresters in general; I felt a similar, if not as strong response myself. Still, if they (foresters) won't be persuaded of the merits of dedicating an infinitesimally small percentage of forest to Old Growth....
Posted by ChrisU at 11:44 AM 0 comments

Fall at the US Nattional Arboretum 2011 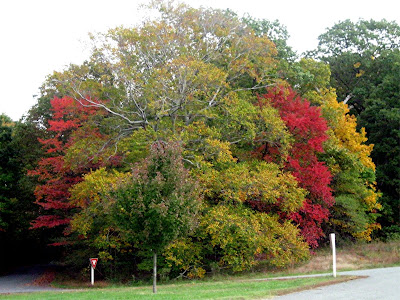 Oh how I am tired of milky white skies. I guess that's what we have this year.
Posted by ChrisU at 4:07 PM 1 comments 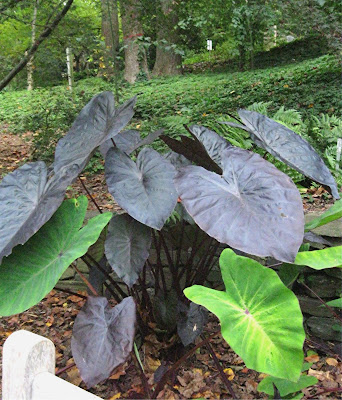 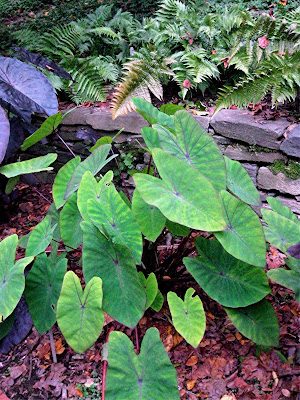 Tropicals just look better and better as fall progresses. That's the positive way of looking at it. The other side of the coin is that they always die at their peak. Actually I guess A.E. Housman would look at the bright side (To an Athlete Dying Young). It's supposed to just dip below freezing this weekend with a dusting of snow. I expect the foliage will be toasted a bit and I'll come in Monday, cut the back, dig the roots, pop them into bags, and stick them under the bench in Poly-8 for the winter.
Posted by ChrisU at 3:56 PM 0 comments 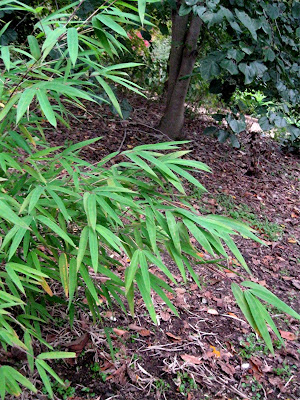 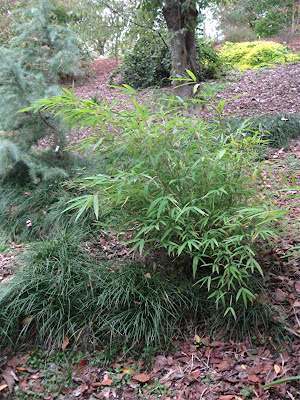 The literature sugget 8-b-9, but these plants have been through two legitimate 7-b winters. They're under irrigation but otherwise they aren't in amy way pampered. I stuck them into the middle of a large bed and looked in from time to time. Apparently it worked; all of a sudden they look good. They're attractive plants with larger "leaves" then most "hardy bamboos". The leaves are reminiscent of another grass, one we don't particularly like to see; they look a lot like Stiltgrass, Microstegium imineum, with than subtle midrib. ??? The overall shape of the plant is also nice, they grow up but arch to one side: very attractive. I like grasses that grow tdirectionally like Hakonechloa. Our are still young but from what I read, we can expect them to grow to 20 feet or more.
Posted by ChrisU at 3:26 PM 0 comments

Fall in the Maple Collection at the US National Arboretum 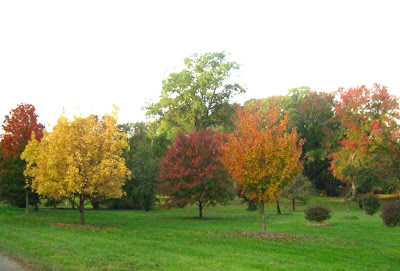 You'd expect good fall color from the maples and if you did, you wouldn't be disappointed.
Posted by ChrisU at 3:55 PM 1 comments

Rhus and Populus on the Fern Valley Meadow's edge 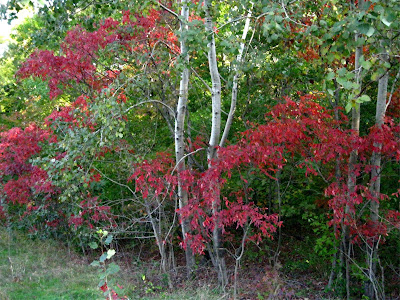 This is a great combination and since they don't do design in FV, it must be serendipitous. Though, as I recall, the Poplars went there as least in part for visual effect.
Posted by ChrisU at 3:52 PM 0 comments

I'm not reading obituaries yet 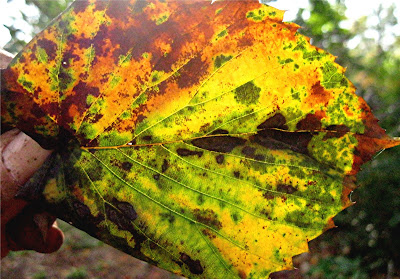 at least with any regularity, but I do seem to be developing an unhealthy fascination with the necrotic process in fallen leaves. I could stare at this leaf for hours. Actually I've just spent 2o minutes choosing which of my 5 exposures to use so I guess I'm well on my way. I chose the one with the dirty thumb because it seemed.....appropriate.
Posted by ChrisU at 3:48 PM 0 comments

Hydrangea paniculata 'Tardiva' with pink bracts....This is not 'Pink Diamond', actually, it's pinker 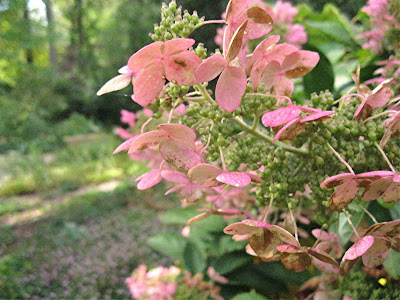 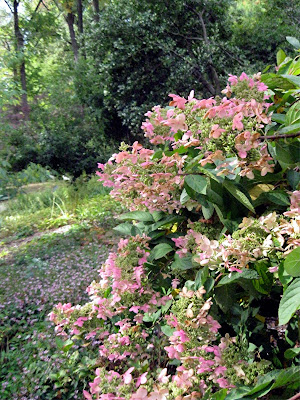 You've got to pay attention every year. You never know when some plant is going to surprise you. This Tardiva has always been a wonderful plant and has grown to massive dimensions. This year, no doubt because of some unique combination on weather conditions, the bracts have turned bubblegum pink. They're usually reddish but this is unprecedented. That pink isn't my favorite color but it's very cool to see so much of it where it's never been before.
Posted by ChrisU at 3:38 PM 0 comments

"and the garden came to her, a displaced city girl.
She saw beauty in work and gratitude in mourning.
She rubbed her hands together and looked at the sky.
The dragon horticulture squatted on her back."

These are the last four lines of today's offering on Poetry Daily, The Previous Tenants by Rodney Jones. "The dragon horticulture" is...well, a wonderful phrase. I've met with thousands of new gardeners, well over 1,000 anyway, and the phrase certainly captures their fears.

As for the poem, I liked it a lot. It's complex and not always pleasant, but it reflects a level of insightful perception that is very impressive. I'll definitely reread it; actually it's one of too few works of poetry offered as an ebook. I just bought it on my Kindle. 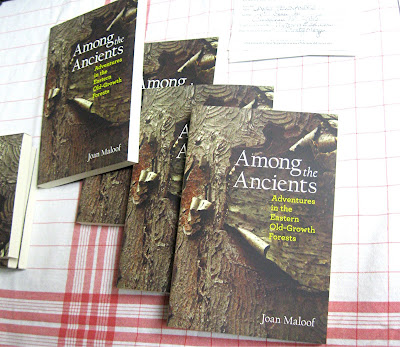 We had an interesting "Talking Plants" today; Joan Maloof spoke about Old Growth Forests (which generally means either virgin forest, or ~300 year old regrowth) and her newest book, Among the Ancients: Adventure in the Eastern Old-Growth Forest. A Pollination Biologist who evolved into a Forest Ecologist, she teaches a range of Biology classes at Salisbury University. We got a quick lesson on the history of forests in the US. If I remember correctly we are 42% forested now, down from 90+% at the time of European settlement, but up from 17% at our lowest point. As for the "Old Growh Forests", like the rest of us who've experienced them, she seems to have fallen in love, and wants everybody to be able to experience the magic. This book, her newest, actually describes specific tracts in the eastern US, one per state. They're all on public land, all open to visitors, and there are detailed directions to each one.

Currently, she's working on a big project, The Old Growth Forest Network. Her goal is to create a network of "old growth" tracts, ideally one per county for the 2,000 odd counties in the US that can support forests. The tracts are to be uncut in perpetuity and open to visitors. Everyone would, or at least could interact with these amazing ecosystems. Interestingly enough she doesn't want any mangement which includes managing invasives or excessive deer population. Sounds good, but the devil's always in the details. I do think that by advocating for open access and not making a lot of noise about "non-native invasives" she's made the concept embraceable across the political spectrum. It would be a grand experiment and I'd love to see where it was after 300 years or so but I probably won't be around then. Still...I am supportive and hopeful.
Posted by ChrisU at 5:12 PM 1 comments

The salvias in the Herb Garden are peaking now 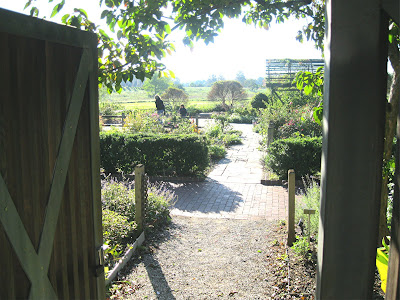 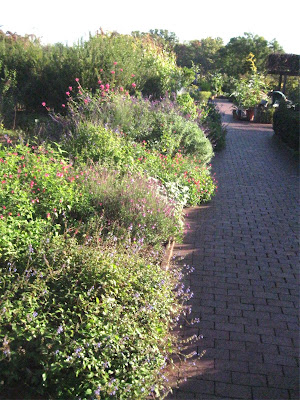 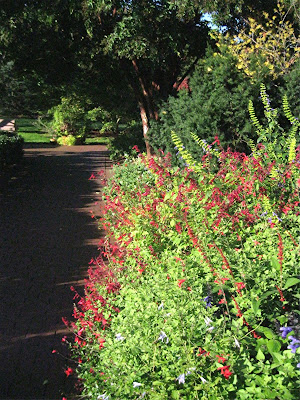 If you peek out of the growing area a few are visible on the ner side of the crossing path. If you walk the few steps to the crossing walkway you find yourself standing in the middle of a long planting of them. A 90 degree turn to the right will reveal the plants in the bottom picture. If you turn 180 degrees you can see the variously colored salvias in the middle picture.

I love salvias; they overwinter as cuttings in the greenhouse flowering sporadically even during the shortest darkest day. I seek them out then when colorful flowers are a rare commodity.
Posted by ChrisU at 4:56 PM 0 comments

It's not a party; those guys are redoing the roof in Bonsai/Penjing 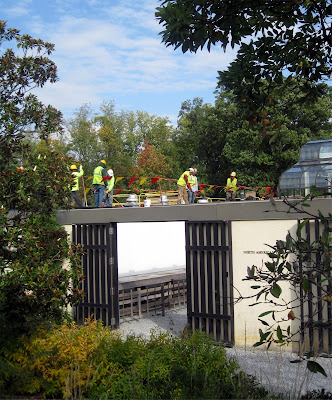 Herb Garden deconstruction.....out with the old 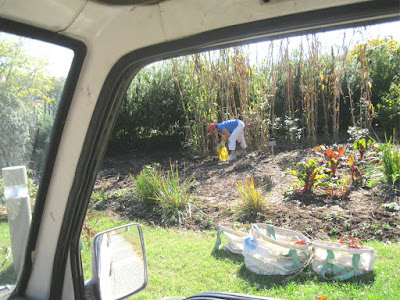 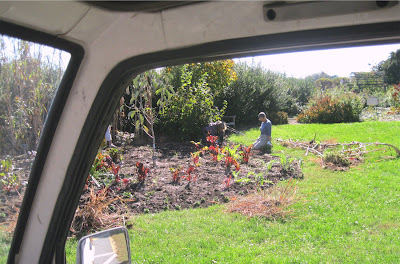 And in with a little bit of new. There aren't a whole lot of seasonal winter planting, but I think I see chard and there are violas, maybe cabbage and kale,.... Over the past few weeks much of the summer season planting have gone, either to the greenwaste pile, or the the greenhouse. Tropicals and seasonals are coming out. Today the Herb Garden staff and volunteers did, in the Herb Garden, what Brad and the ASRT's had done last week in the Intro Garden.
Posted by ChrisU at 3:55 PM 0 comments 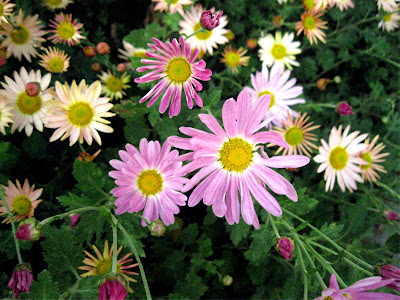 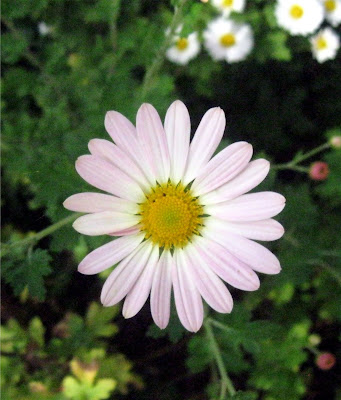 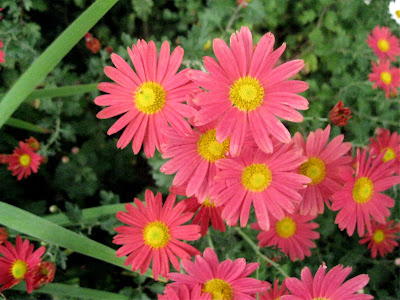 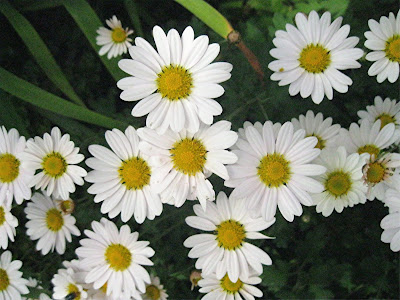 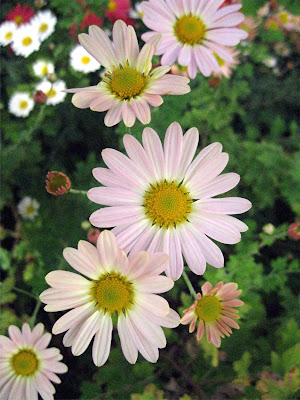 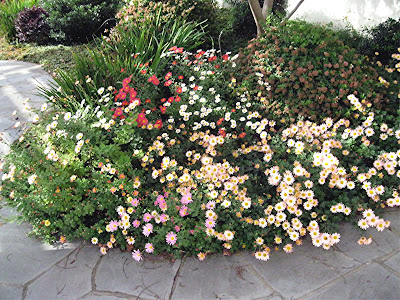 Some philandering seems to have gone on here, though perhaps 'Scheffield' would deny it and try to blame somatic mutations for all this variation. Anything's possible but the long odds favor accidental cross pollenation. The planting is in the National Bonsai Museum and there are always itinerant mums ready to take advantage of the perennial planting. The cultivar 'Scheffield' is typically the light peachy color of the plants in the bottom right of the bottom picture.

I'm interested in C. rubellum selections and have accumulated a handful of named cultivars. Floristically, at least three of them are essentially identical to the top three pictures.
Posted by ChrisU at 4:53 PM 1 comments

Looking down the path to the Pagoda from Hickey Hill Road...Where are the fairies? or the gentle fawn/faun? 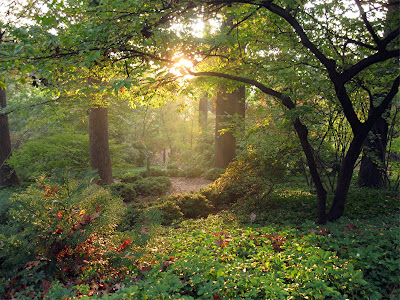 If I saw this scene on a greeting card or on a velvet wall hanging, I'd probably be unfavorably impressed, but I like it. It's either because I took it myself of I know this is a real place that I care about and it truly did look like this this morning at quarter till eight. (There was absolutely no manipulation of this image; I didn't even crop it. It's all about the crazy light on a misty morning, ouch!) Just for the heck of it, this is the reverse view, up the path, from April this year.

I''ve taken this picture many times; it's a pleasant spot framed by the tall shade of the Tulip trees. Sometimes the azaleas on the left side are flowering. Sometimes the Corylopsis a flowering, there are two in the view. Sometimes the Styrax japonica, silhouetted right midground is outlined with pendulous white flowers. Today the sunlight was the only ornament.
Posted by ChrisU at 3:07 PM 1 comments

All the trees are turning....it won't be long now 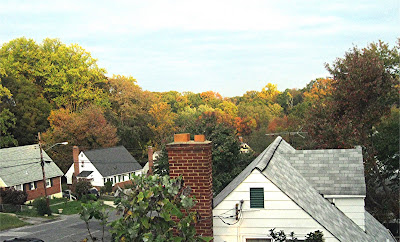 We've already lost four hours of daylight since the Summer Solstice and the angle of the sun at noon has gone from 75 degrees to 36 degrees. That's the real kicker. These glancing blows are no match for the vertical bombardment of summer. Plus we're still losing more than 2 minutes a day of sunlight and we'll lose another 10 degrees of declination. Oh my. When will it all end? Oh that's right, December 21. Then we just have to wait three months and presto: Spring.
Posted by ChrisU at 4:47 AM 2 comments