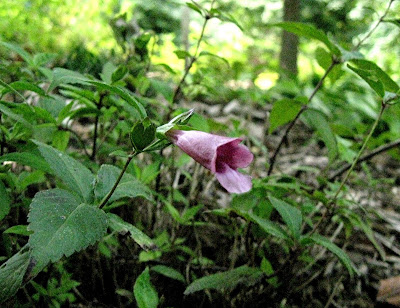 This is a pretty little unpretentious perennial. There are two specimens in China Valley, one is near the top in full sun and despite being crushed between a rock and a mass of unruly sedums, has been flowering for at least two months. There isn't a lot in the literature (I include cyberliterature here) on this plant but most sources do point out the long season of bloom. The other, and the one I photographed here, is near the middle of China Valley and in a good deal more shade. Both plants are fairly short, under 2', and while the flowers are attractive and consistent, you wouldn't call it showy. Hey, there's room in the world for plants that aren't Roses, Lilies, Iris, or Hydrangeas and this is a nice one.
Posted by ChrisU at 4:31 PM 0 comments 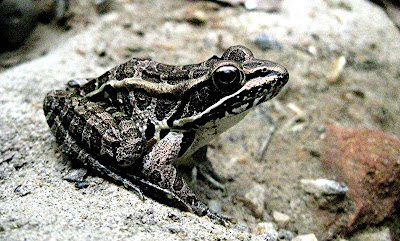 I know the plant kingdom far better from the animal, but I do know that this is a toad! I wish toads were more common in the garden than they are. They are carnivores, eating a diet of mixed invertebrates. Slugs, worms, beetles, pillbugs among others.

My parent's house has a smallish lilypond that dates to the late 1960s. Toads breed in the water of course, the gelatinous strings of eggs hatch to produce tadpoles that eventually grow legs, lose their gills, climb out of the water and live the balance of their lives on land. I can remember what, in retrospect, were somewhat disturbing nocturnal orgies. Triggered by a full moon in early spring, males sung their distinctive song, a protracted trill. Females responded and the full moon revealed black water boiling with toad sex. Over 30 individuals in a pool that wasn't 10' x 6'. It was fascinating and disturbing at the same time.

Well....for whatever reason, maybe the explosion in the use of lawn chemicals, over the 1980s and 90s, the numbers dwindled. I remember my father telling me one year they had a solitary male who trilled in vain.....more disturbing than the group sex. Well over the last few years the toads have been reappearing. Not roiling masses, but a few pairs a year, enough, we can only hope, to maintain populations at a reasonable level, which, forgive me, like Scrooge, I do not know.
Posted by ChrisU at 4:08 PM 0 comments 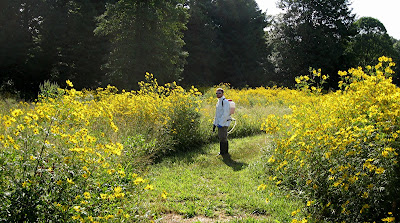 Michael applies 2,3-D to the mown paths in the Fern Valley Meadow. Two days from now (after the 48 hour reentry period) we can all enjoy the late summer composites. Bidens mostly?
Posted by ChrisU at 2:01 PM 0 comments

Nathan didn't bully us into helping him cut down those trees, he convinced us it was a good idea 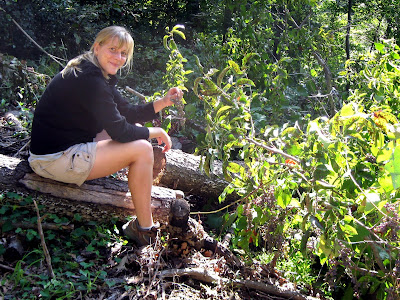 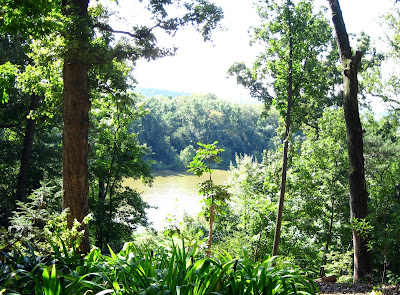 And he was right. It opened up a wonderful view of the river.

At some point in the past he'd convinced Carole that we could open up a view of the Anacostia River by removing several unhealthy trees. Well, this was the week. The view is as seen from the new bench at the bottom of the Japanese Woodland (sitting in a stone alcove Nate built last year). I sat there for less than 10 minutes and saw a great blue heron and a greater egret....and the river. It was muddy today; some days its clearer, dark with sun splashed whitecaps. Amanda harvested grapes that came down from the top of the tree, actually, in the top of the tree. They were sharp tasting but good, a sort of bonus for our industrious behaviour.
Posted by ChrisU at 1:50 PM 0 comments 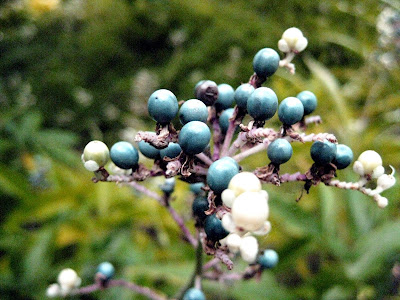 When I worked in China Valley in the early 90s, there was Pollia in the collection. I worried about it because it spreads well by rhizomes and seeds prolifically. Well, almost 20 years later we do pull the occasional seedling but it doesn't seem to be the invasive problem that I had thought it might be. And it's beautiful.

A member of the commelinaceae, it grow to about .5m with glossy green more or less oblanceolate leaves; it looks a bit like a little ginger. The flowers aren't spectacular in late summer to fall, but the berries are, and the colony itself can be a very useful landscape element. I notice Annie's Annuals is listing it this year. For such an easy plant to propagate it's fairly uncommon in the trade.
Posted by ChrisU at 3:19 PM 0 comments 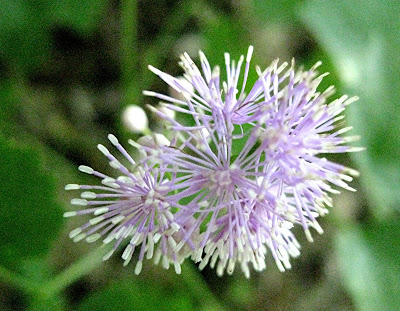 Hey, Thalictrums are supposed to have those distinctive Thalictrum leaves that allow identification at a glance out of season. Not this one; it really does have leaves like Actaea. I suppose since the genus Actaea has gobbled up so many other species in recent revisions, it's only appropriate that a Thalictrum has assumed the traditional foliage of the Actaeas???

Anyway this is a nice smallish, ours are under .5m, plant that is flowering nicely now in an areas where we traditionally have trouble making perennials happy. There are a dozen or so plants in flowering in the dryish dappled shade above the path to the lower overlook along the path to the Pagoda.
Posted by ChrisU at 2:52 AM 0 comments 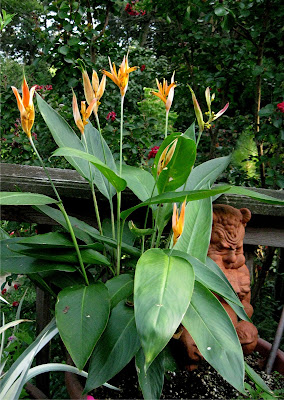 If I lived in Zone 10 I would grow lots of Heliconias. The Florida garden is only Zone 9a so they're seasonal plants even there. I think we paid 6 dollars for this plant in a one gallon pot. It came north in April and has been an exemplary container plant, growing quickly and flowering nonstop. While many Heliconias reach heights of 20' or more, this one stays under 3'. There are a number of selections of the species but this one seems to be the commonest.
Posted by ChrisU at 4:04 PM 0 comments

Koelreuteria bipinnata....the flowers are pretty but it's not Neal's favorite tree 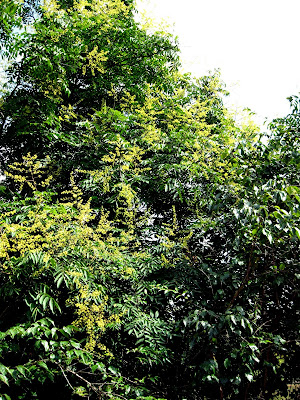 Actually he hates it and regularly opines to the effect that we ought to cut it down. Likely the fact that Neal (a two day a week Asian Collections volunteer) ends up weeding out maybe half of the thousands of seedlings that it produces has something to do with his extreme position. This tree produces major quantities of seed that is broadcast over the bottom third of China Valley. A good percentage seems to germinate.The good thing is that the seedlings are strong and tap rooted so that it's fairly easy to pull them out whole.

Chinese flame tree is first cousin to the Golden rain tree, Koelreuteria paniculata. Both are medium-sized trees with yellow flowers in the summer followed by curious bladder-like seed pods. On K. paniculata the pods turn beige/brown so that the trees appear spotted with dead branchlets. I remember when K. bipinnata came on the scene commercially; its pods matured to a light pink....a plus instead of a minus.

Our specimen, we removed two others though not at Neal's behest, was grown from seed wild collected in China in October 1988. In the Qingliangfeng Natural Preserve in Anhui Province (East China). The parent tree was growing on a slope near a stream at ~700m elevation. Our tree is growing on a slope now at the bottom of Chila Valley. I am intrigued by this sort of detail about the history of a plant. The notes continue that it was growing from a mass of evergreen vine. As annoying as it is, it's beautiful right now!
Posted by ChrisU at 3:07 PM 0 comments